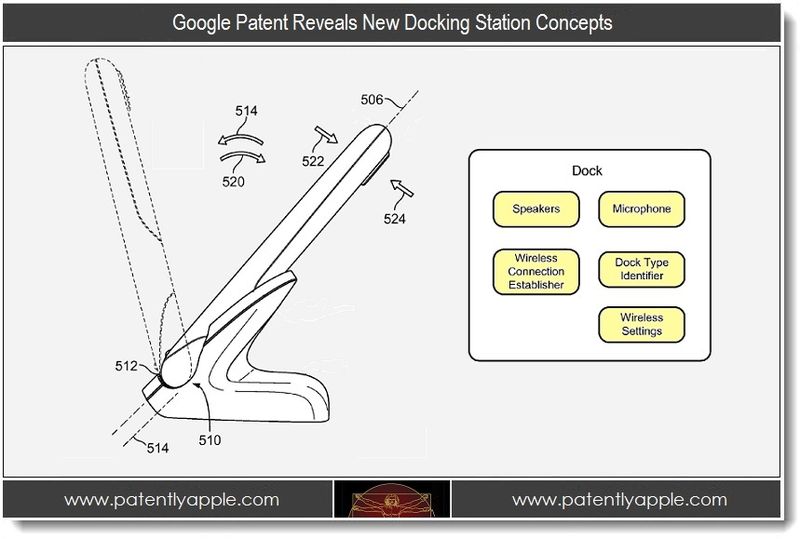 Earlier this month both Business Insider and eWeek made it abundantly clear that they thought Google's foray into hardware, beginning with a music gadget for the home, would be a disastrous move. Well, according to a new Google patent, they've have their sights on making hardware as far back as Q3 2010. Google's patent clearly illustrates their desire to deliver not one, but two distinct Android phone docks. One is aimed for the desktop market while the other is aimed for the car dock market. In particular, the car dock model will offer users a series of unique apps including one for full turn-by-turn navigation. At the end of the day, Google's delivery of some common ground devices designed to serve the entire Android ecosystem only makes sense.

Google's Vision of a Desktop Dock for Android

Google has their eye on two distinct docks for the Android market. The first one is for a desktop dock. Google's patent FIG. 3 shown below illustrates an example desktop dock for Android phones. Throughout this report, the Android phone may be described as either the "device" or "computing device."

Google's FIG. 3 illustrates the desktop dock 302 in both a front view 302A and a rear view 302B. The dock is obviously for charging an Android phone while being able to route an audio signal to an external speaker system.

The dock may include three conductive pins for establishing physical electrical connections with the device 304, when it's docked. A first pin 306 may provide a positive voltage electrical current to the device. A second pin 308 may provide a reference voltage (e.g., ground) to the device while a third pin 310 may be used for bi-directional serial data communication between the dock and the device. Additional pins may be included in other implementations, such as to provide for parallel data communications with the device. 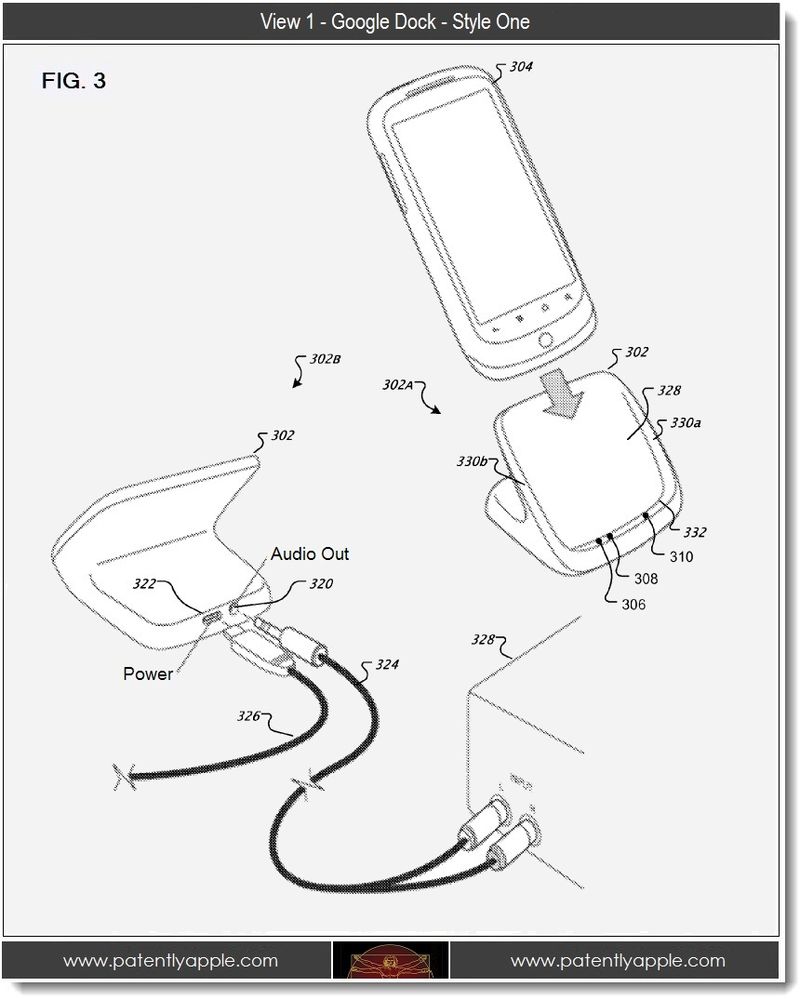 As illustrated in the back view 302B, the dock includes a 3.5 mm female audio output jack 320, and a female USB jack 322. A 3.5 mm to RCA cable 324 may connect the dock 302 to an external audio source 328 (e.g., a receiver of a home stereo system). A USB cable 326 may connect the dock 302 to a power brick for connection to an AC power source. In some examples, the USB cable 326 may connect to a DC power source without a power brick, for example by connecting to a laptop computer. The laptop computer may supply solely DC power to the dock or may additionally establish digital data communications with the dock

Another View of Google's Desktop Dock 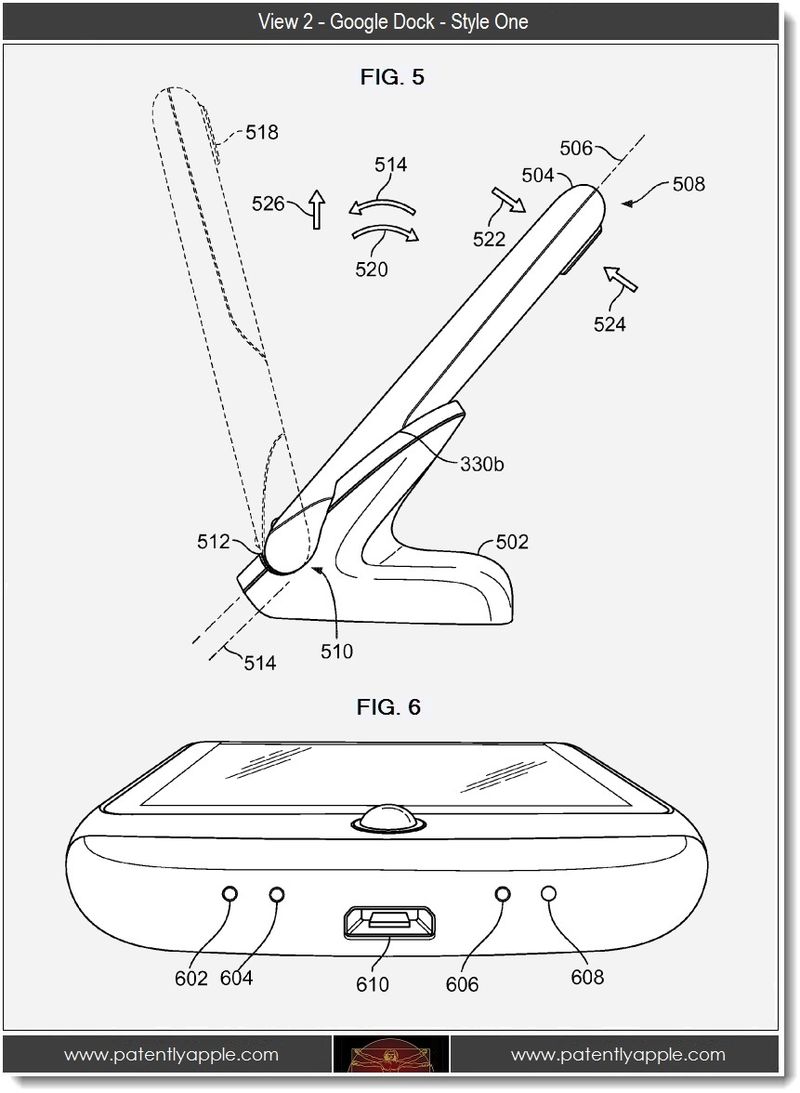 In some implementations, the dock illustrated in patent FIG. 5 as patent point 502, is designed to receive the device in a "frictionless" manner. In other words, a user may place and remove the device from the dock without applying much more force than is necessary to manipulate the device in free space. Accordingly, the dock may not include any guiderails or protrusions that engage with the device and that cause it to be placed into the dock or removed from the dock with a one-dimensional linear movement.

Patent FIG. 5 illustrates just how easy it will be to slide your Android phone in or out of the dock when using this frictionless contact method. Google states that there will roughly be a two centimeter swing range before removal away from the dock occurs – as is noted patent point 514 of FIG. 5.

This segment also offers an alternative to the frictionless docking contact. While they point to data connection terminal 610, they never really identify what that could be. Meaning they don't mention USB or Thunderbolt. Does anyone have a suggestion based on the design of docking contact 610?

The second dock that Google has their eye on relates to a car dock as shown in patent FIG. 4 below. In this noted figure, the car dock (402) includes a base (404) for mounting the car dock to a surface (e.g., a car dashboard, a car windshield, a desk, or a wall). The base may include a suction cup (406) that enables the base to mount to consistent surfaces. A disk (408) can be adhesively attached to an uneven surface (e.g., a rippled car dashboard) to provide a consistent surface for the dock. 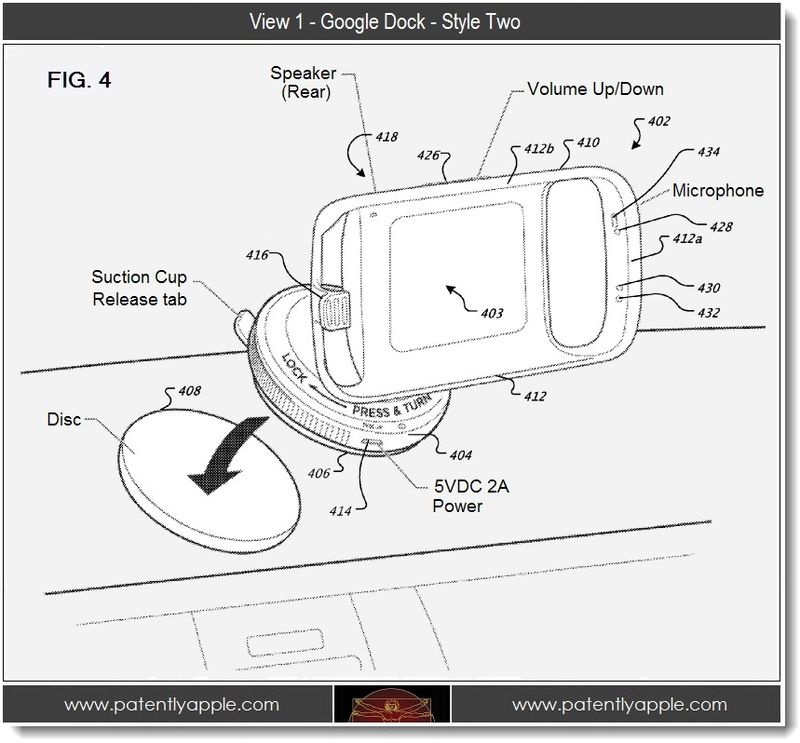 The car dock also includes speakers (418) that radiate sound from a back side of the dock. In some examples, the speakers play audio that has been wirelessly transmitted from a mobile device to the dock. A volume rocker switch (426) allows a user to adjust the volume of audio that is output by the speakers. The car dock also includes a microphone (434) which could have acoustic qualities that are better suited for speakerphone operation than does a microphone of a mobile device.

The interesting aspect of Google's car dock is that it will be accompanied by several unique applications. Some playing right into their traditional strengths as follows:

Navigation Interface: When the user selects the "Navigate" interface element (820) to launch an application program that provides driving directions from a present location of the mobile device to a user-input location. The patent also mentions a "Map" interface for finer turn-by-turn navigation. Specifically, patent point 308 states the following:

Call Interface: Selection of a "Call" interface element (822) may launch an application program that allows the user to place a telephone call with their Android phone in a hands free manner.

Voice Search: Selection of a "Voice Search" interface element (824) may launch an application program that allows the user to audibly speak a query and, in response, the Android phone may display a list of search results. 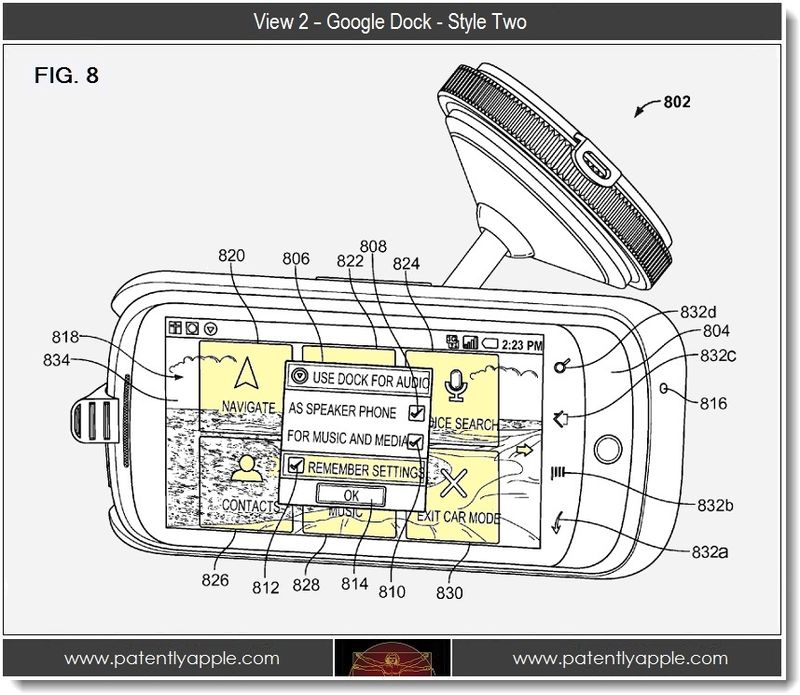 Other Interfaces Including Exist Car Mode: Other interfaces could include ones for "Contacts," (826), "Music" (828), and even one called "Exit Car Mode." The latter interface element (830) may cause the car dock specific desktop (818) to disappear and be replaced by a desktop that is displayed during an undocked state of the mobile device. The patent notes that while in car dock mode, some of the main Android phone buttons are deactivate (832a to 832d).

As noted in patent FIG. 5, a background display (834) is displayed as lying behind partially transparent selectable interface elements (820-830). In some examples, the background display changes at least partially based on the geographical position of the mobile computing device. In the illustration of patent FIG. 5, the background illustrates an image of the ocean. For example, the user may be driving up U.S. Route 101 along the Oregon west coast and an image of a place that is nearby the user's location may be retrieved from a server and may be displayed as the background display. If the user were to be driving through the mountains, an image that includes mountains may be selected. 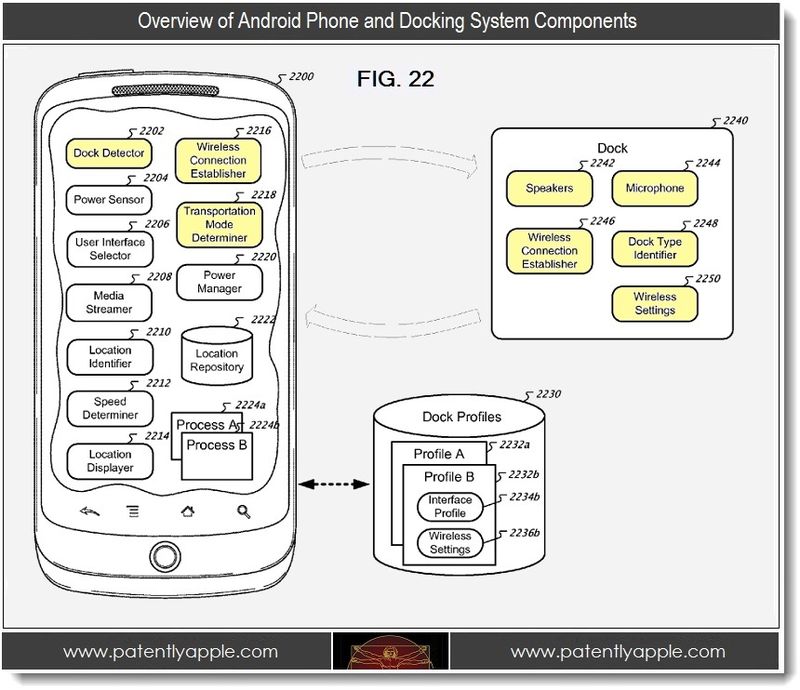 A "Car Finding" App for Android

One of the last things that I wanted to point out about this patent was a possible future Android app for finding your car. Google states "For example, a "car finding" application program may display a screen that includes a dot that represents a location of the mobile device. The dot may appear accurately placed with regard to a directional bearing or orientation of the mobile device. As the user turns the mobile device, the dot may move side to side on the mobile device. As the user walks in the direction of the car, the dot may move closer to a bottom of the screen (where the bottom of the screen may represent a user's present location). Thus, the "car finding" application may mimic a "sonar" system that shows a bearing of and a distance to a target."

Google's description appears to follow the principles behind Apple's "Find My iPhone" app except it applies it to finding your car. One could only hope that it's a little more accurate than Apple's application, otherwise finding your car with this app will be useless. On the other hand, due to the fact that the Android phone would be in communication with Google's car dock, it's very likely to end up being deadly accurate.

Google's patent application was originally filed in Q3 2010 and published by the USPTO in Q1 2012. It should be noted that the final designs of either docking system could be both thinner and slicker for the consumer market. Patent applications are only obliged to present the concepts behind a future design and not the actual designs planned for production.