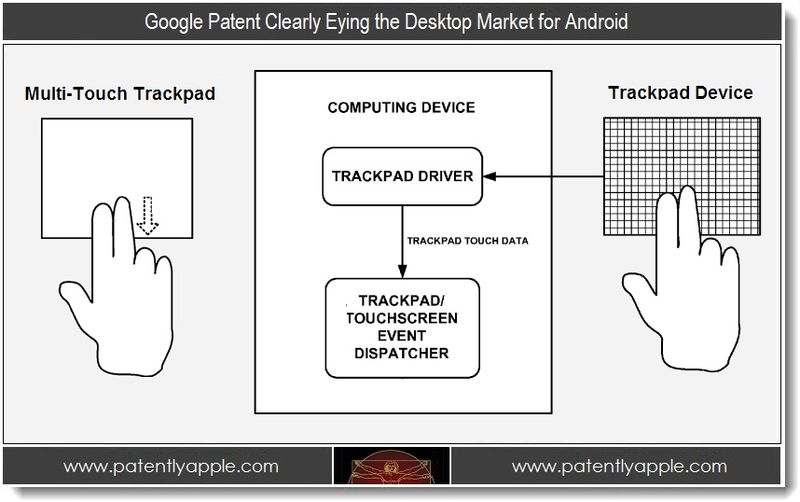 A recent patent filing by Google surprisingly indicates that they're seriously eying the desktop and notebook markets for Android. Interestingly, the patent seems to focus on similar capabilities now found in Apple's Multi-Touch Trackpad and Magic Trackpad. In many ways that's understandable considering that Google is working on the Android for x86 project along with a serious list of other Intel-Android related projects. Android is headed for the desktop and today's report lays out Google's specific work on trackpad operations corresponding to touchscreen events.

For instance, a user may initially move a single finger on the trackpad device to cause a displayed pointer to move correspondingly on a display device of the computing device. The user may touch or tap a single finger on the trackpad device to deliver a simulated touchscreen finger tap at the current pointer location as displayed on the display device. The trackpad finger tap operation may thereby be mapped to a touchscreen finger tap event that may be generated for processing by an application that is designed to receive input via a touchscreen interface.

If the user touches two fingers on the trackpad device and substantially moves them together, those movements can be mapped into absolute touchscreen events relative to the current pointer location displayed at the start of movement, allowing the user to directly interact with graphical elements located at the current pointer location as if they are using a touchscreen device, and perform traditional touchscreen operations (e.g., dragging/flinging content, scrolling).

In Google's patent FIG. 1 shown below we see is a block diagram illustrating an example of a computing device (shown as patent point 2 of the patent figure) that may be configured to map trackpad operations to corresponding touchscreen events. The computing device may, in some examples, comprise or be part of a desktop computing device or a mobile portable computing device such as a netbook, laptop or tablet device. 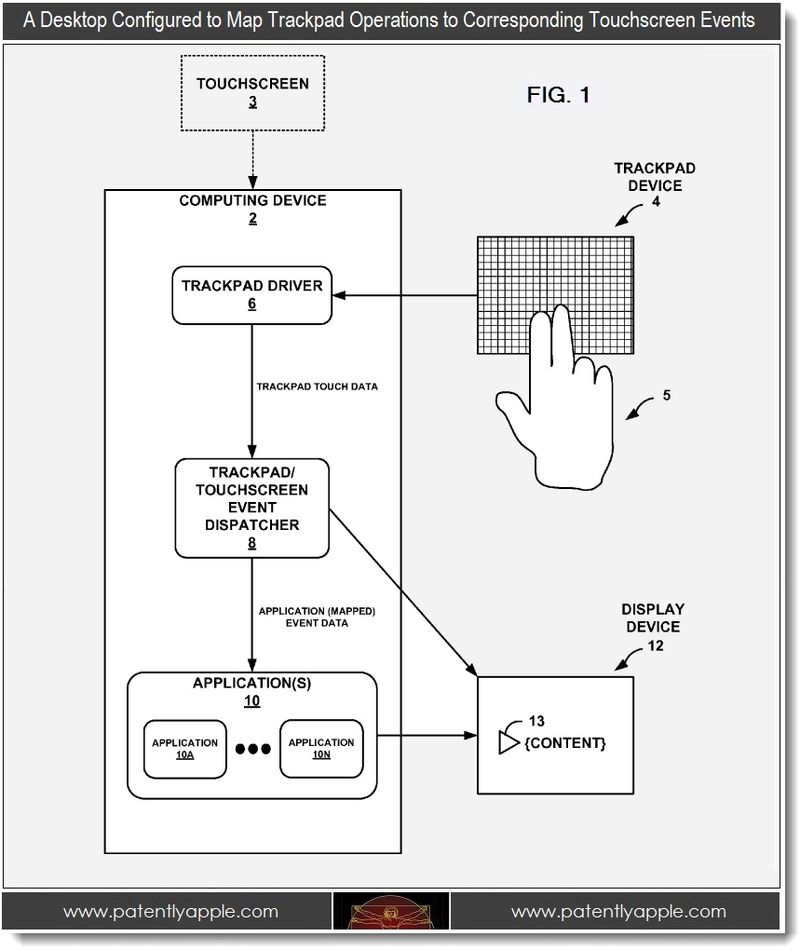 Google's patent FIG. 4 shown below is a diagram illustrating example trackpad operations that may be mapped to corresponding touchscreen events. 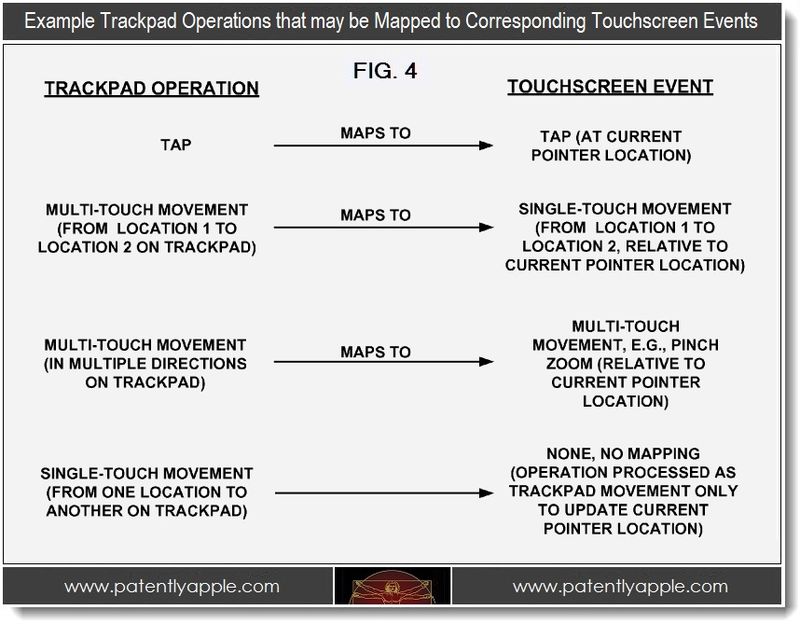 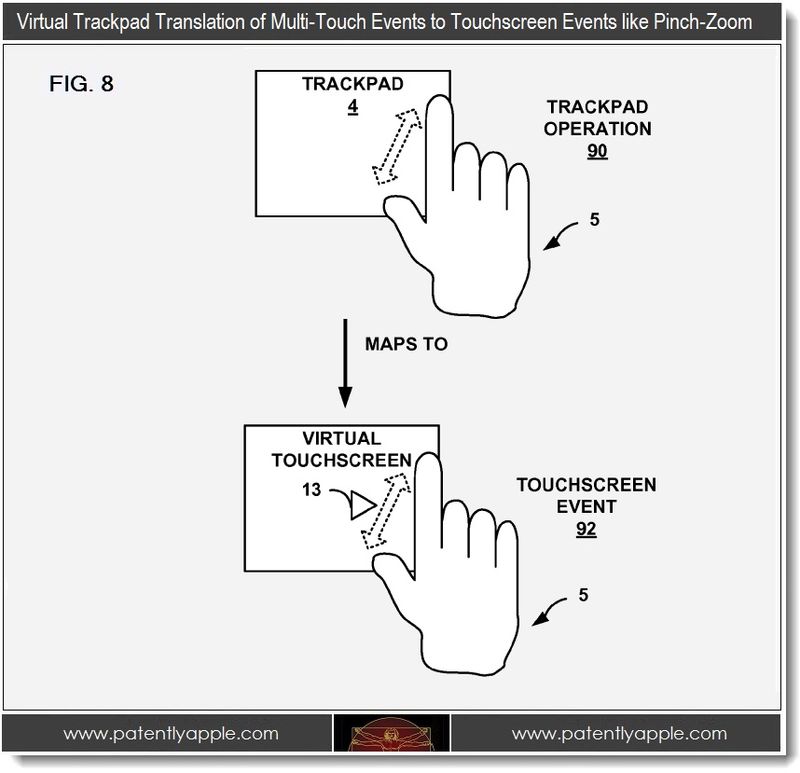 Google's patent FIG. 5 shown below is a conceptual diagram illustrating an example mapping of a trackpad tap operation to a touchscreen tap event at a current location of pointer 13. The display device may serve as the output device, such that trackpad 4 and display device 12 in combination may function as a virtual touchscreen device, as shown in FIG. 5. 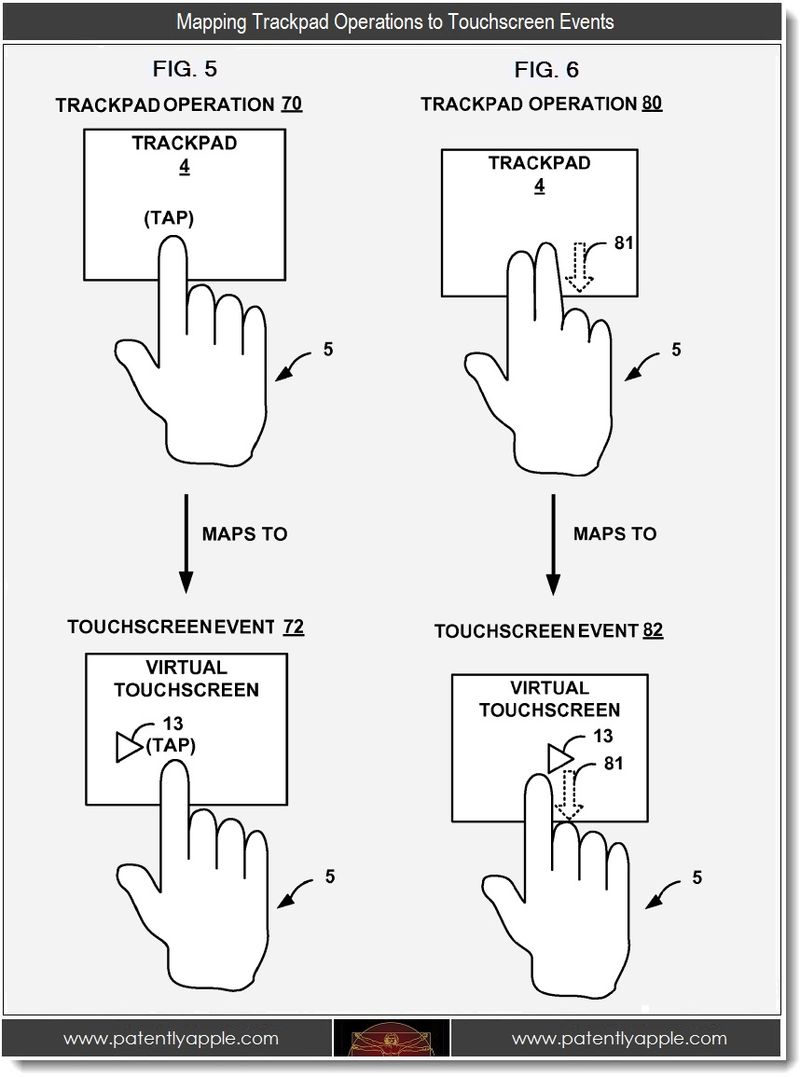 As one example, Google's patent FIG. 6 shown above is a conceptual diagram illustrating an example mapping of a trackpad multi-touch movement operation to a touchscreen single-touch gesture event.

Will We See Android on Haswell?

Back in 2005 Steve Jobs announced that Apple was transitioning to Intel's X86 and the transition was rather a quick one due to an army of Intel engineers assisting Apple. So if Intel is now seriously behind getting android to Intel processors, it's all but a done deal. It wouldn't surprise me in the least to see Android on a Haswell based Ultrabook in 2013, as that platform promises to support multiple operating system functionality as you could see in the slide below. Haswell will also power next generation desktops that will support multiple operating systems and voila, Android is a serious candidate for the desktop for Android fans. It's also the processor that will push the Ultrabook to function as a Notebook-Tablet combination unit and there's where Android will be able to shine. With Apple integrating more iOS features into OS X this summer with the introduction of Mountain Lion, the influences of the tablet moving into the desktop space will continue to change the traditional desktop OS. Likewise, the popularity of Google's Android almost demands that it now move to something like the 2013 Ultrabook. And by doing so, it must be able to offer both multi-touch and trackpad functionality. That's what today's patent reveals and confirms.

@ David. That's a good point that only a lawyer could answer. On the surface, however, it appears that Google doesn't care about legal wranglings. They seem to be the new patent-arogant player in the market surpassing Apple.

@ Huhster. The patent is about Multi-Touch gestures not just a trackpad like mouse. Huge difference.

Every version of Linuix works with a touchpad why would Android be any different ? Android has supported touchpad/mouse with a cursor since Honeycomb, none of this is a surprise, you can already by netbooks that run Android.

This seems like something Apple or Microsoft would already have covered with their own patents. How might these previous patent holders impact Google's patent?

I see more Apple lawsuits over multi-touch if Google takes Android into more hardware platforms. 2013 should be a critical year for current lawsuits. Should Apple get favorable rulings I expect they will try and get "damages" from Google. Currently those with expertise are favoring Apple slightly in their odds.