Apple Wins a Foundational 3D Interface Patent that Might be Timely 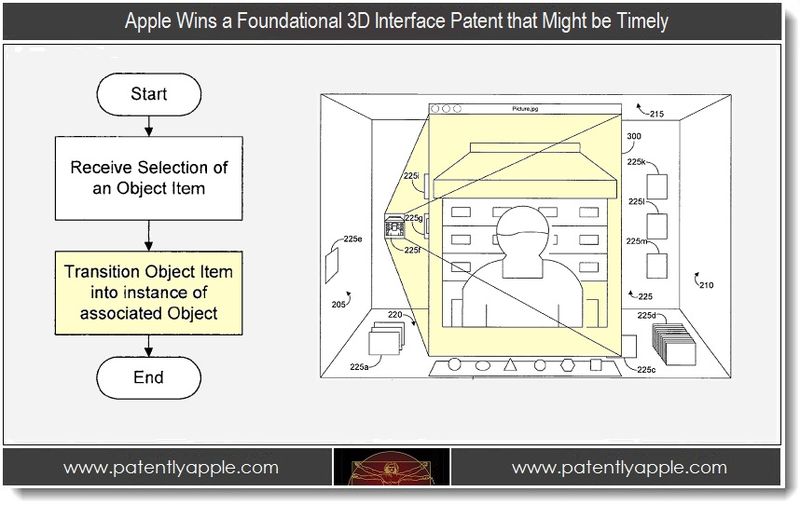 On February 28, 2012, the US Patent & Trademark Office published a granted patent from Apple that could be considered a foundational 3D interface patent. The patent describes a new "transition engine" that will be added to OS X and iOS. This new engine will allow a user to choose a tiny object on their new 3D desktop and zoom it out to see what it is or to read a filed PDF or view a photo or video and then allow it to zoom back to the position on their desktop with a cross fading effect in play. It could also transition using an animated effect. So instead of clicking on the object to open it, the user will have the ability to simply zoom an image or app in and out with ease. When you think about it awhile, it's one of the coolest and most refreshing ideas that I've read about in some time.

As Processing Power Dramatically Increases, Apple Wants to Take the Desktop Metaphor to the Next Level

As the capabilities of processing devices progress, however, so do the demands placed on the graphical user interface to convey information to the users in an intuitive manner.

According to Apple, although the patent figures are geared toward the desktop via OS X, the fact is that Apple will also have this next generational 3D interface integrated into iOS as well. A new 3D Eye-Tracking Interface patent application relating to the iPhone was posted earlier this month. 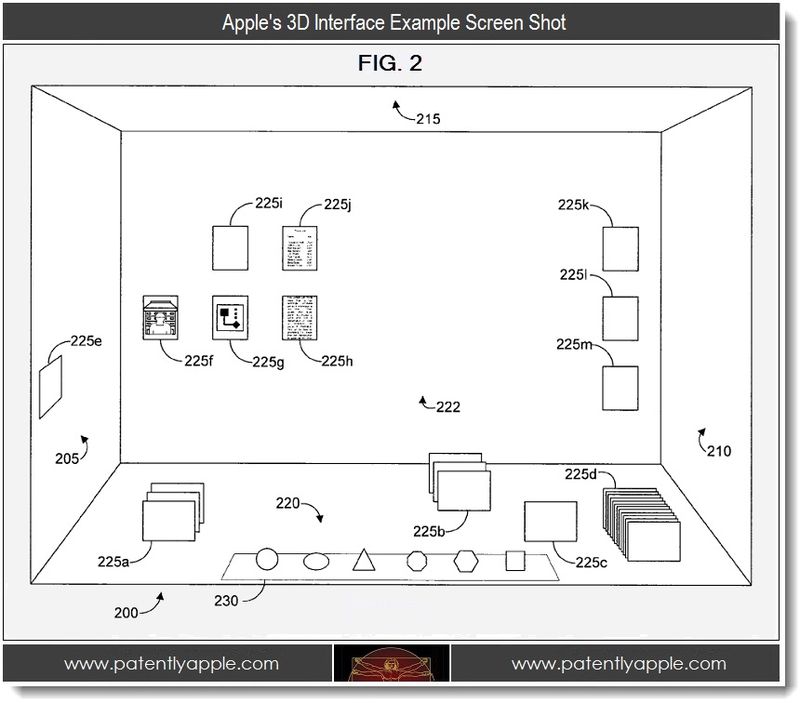 The transition engine is basically taking something on the desktop that starts off as a representative of a photo or file. When the user which to take a closer look at such photo or file, the transition takes place like a form of zoom effect going from very tiny to full a full size file. Apple describe that such an effect could take on a cross fading transition effect. Examples of this are illustrated below. 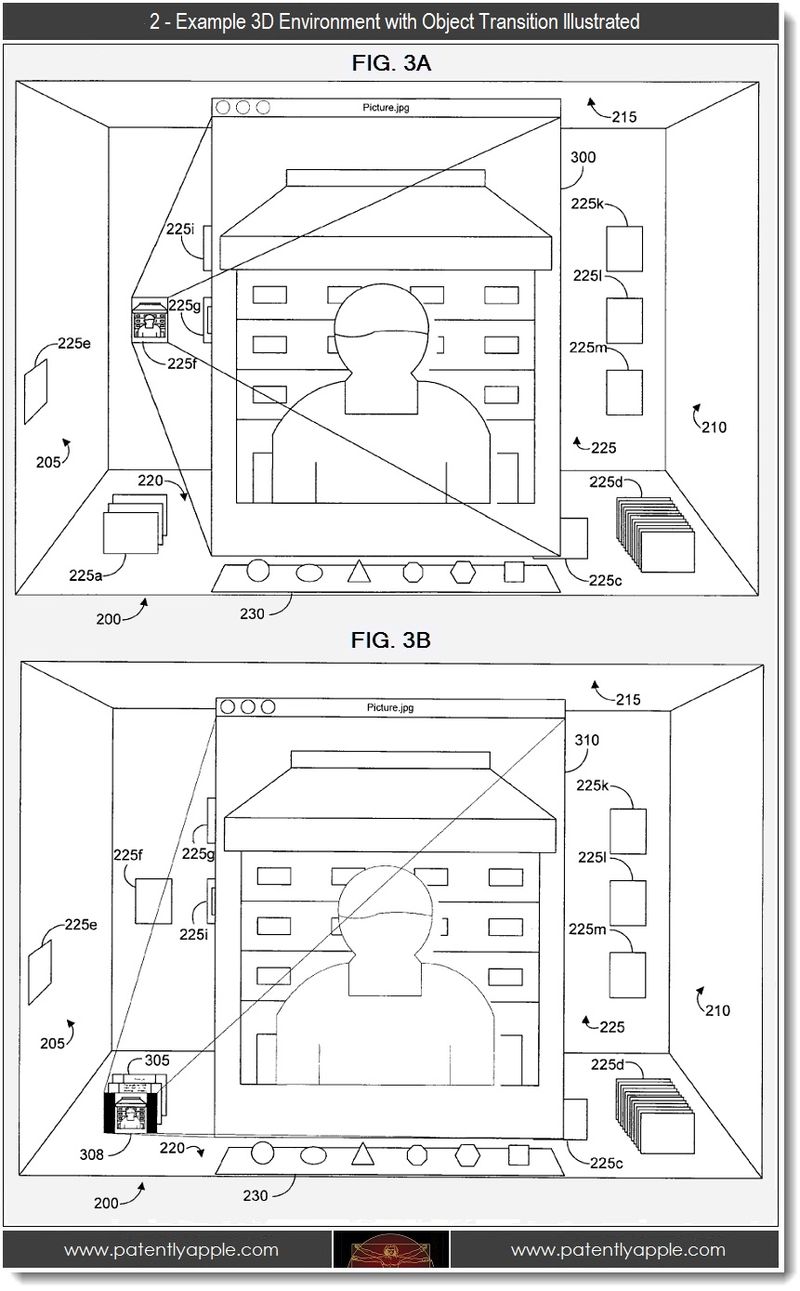 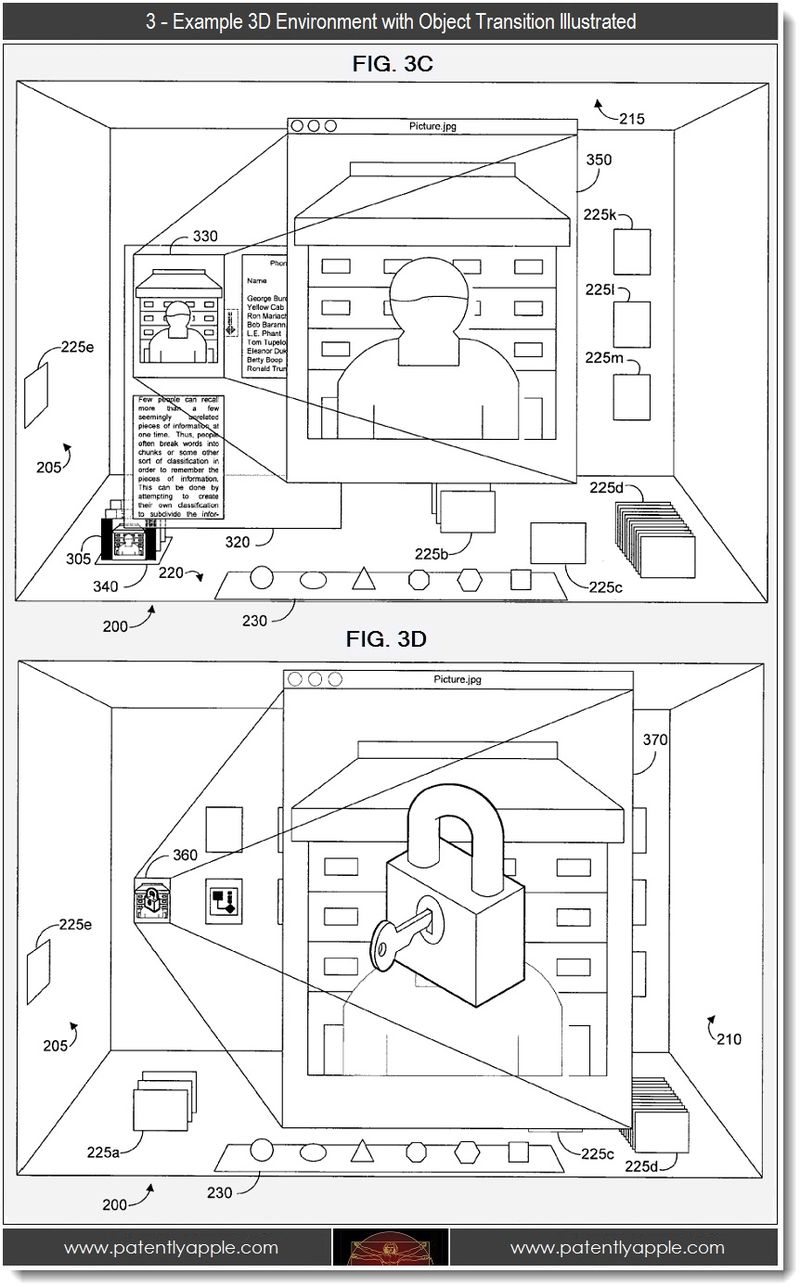 Apple has a number of patent applications on the subject of 3D interfaces and you could check out our Archives to view some of them. As we pointed out earlier in our report, we covered a new patent on the matter only weeks ago. It's without a doubt a real trend. And with the advances made to next generation processors and more advanced batteries, Apple sees the day when users will be able to use a 3D interface at all times – while allowing a user to switch back to a standard 2D to conserve energy when needed.

Earlier this month we posted a report titled "Apple's Macroscalar Architecture: Will it Take iOS to the Next Level?" The report was based on and inspired by the fact that out of nowhere, Apple decided to file for the "Macroscalar" trademark in Europe, the US and China. The trademark was associated with a patent Apple has on record for a Macroscalar Processor. The key to that patent was the clue concerning parallelism. Where did we hear that before? Well, it's interconnected with Apple's OpenCL.

Wikipedia states that OpenCL is analogous to the open industry standards OpenGL and OpenAL, for 3D graphics and computer audio, respectively. Khronos Group states that OpenGL is the most widely adopted 2D and 3D graphics API in the industry, bringing thousands of applications to a wide variety of computer platforms. It's beneficial to markets such as CAD, content creation, energy, entertainment, game development, manufacturing, medical, and virtual reality.

Now imagine a processor designed to ignite all things OpenCL? Yes, that's where a 3D user interface is likely to come into play. Does that mean it will be a part of Apple's A6 or A7 processors? I don't know. But Apple didn't trademark Macroscalar for nothing and the timing is starting to look very good. With a little patience, I think a 3d interface just might be on the horizon. And the building evidence that we're seeing on the horizon would strongly suggest that it's not a mirage. Then again, time will tell.

"Your lack of faith disturbs me…."

I think that the patent graphics are, as always Rob, presenting a "concept" of what could be and not how Apple will actually lay it out in its final form. It could end up being a curved backdrop but one with depth. I'd be able to have 2 times the apps on my iPad's home page that way. I think Apple has something very cool in the works on this project. It may take a few years, but I think they could, as always, do something that none of us could have imagined.

I'm sorry you feel such admiration for this set of ideas as I very much don't. We should take the opportunity to create worlds of experience that focus and enlighten the tasks we use it for, with an acknowledgement that it is created, not imitation "real".