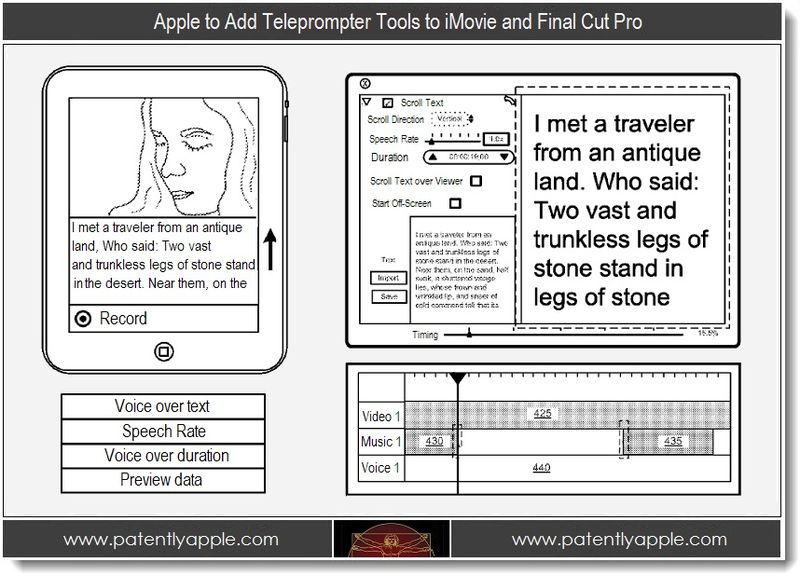 Yesterday, the US Patent & Trademark Office published a patent application from Apple that revealed their intent to add a new teleprompter feature to both iMovie and Final Cut Pro. Sometime in the future you'll be able to both film yourself on an iPad while reading your very own script like the pros. This is Apple's second patent relating to future iReporter tools for iOS devices. Is it a trend? Well, last March, KBTV anchor-reporter Mike McNeill was the first person to shoot a news segment using the iPad 2 and Apple may want to tap into this new trend relating to Street Reporting. While this type of reporting won't be mainstream anytime soon, it surely has its place in impromptu situations or for informal video casts. This is Patently Apple reporting live for J-A-C-K news.

To date, many media editing applications exist for creating media presentations by compositing several pieces of media content such as video, audio, animation, still image, etc. Such applications give users the ability to edit, combine, transition, overlay, and piece together different media content in a variety of manners to create a resulting composite presentation. Examples of media editing applications include Final Cut Pro and iMovie.

There are a number shortcomings with the approaches mentioned above. For instance, in creating a voice-over clip, a narrator performs take after take (i.e., read a same script multiple times) in order to match the timing of a voice-over with other video clip and/or audio clip in a composite presentation. Also, launching a separate text editing application (e.g., Text Edit, Pages) to display a script causes the operating system's user interface to be cluttered with various user interface windows (e.g., the media editing application, a document reader, an audio recorder, etc.) making it difficult to read the script. Furthermore, reading a script from a printed document or a separate text editing application fails to correlate the scripted words with a composite content that is being produced.

In some embodiments, the media editing application receives a script for a voice-over in a number of different ways. For instance, the application's user could type the script and/or copy and paste it directly into the text area. Alternatively or conjunctively, text contained in one or more files (e.g., text file, word document) can be imported into the text area. To facilitate import operations, some embodiments provide a set of import tools to select one or more files that contains text. Once selected, the media editing application then extracts text contained in each selected file and populate the text area with the extracted text.

The media editing application in some embodiments display a script for a voice-over clip by scrolling the script in the output display area over a set time duration. For instance, the script may be scrolled in the display area such that the first line of the script appears in the display area just as the duration begins and the last line of the script disappears just as the duration ends. In some embodiments, the media editing application provides several different user adjustable items (e.g., a slider control) to specify the scrolling speed of output text.

Based on input text for a voice-over clip, some embodiments automatically calculate an estimated duration for reading the input text. In some embodiments, the estimation is based on a time that an average speaker takes to read aloud a given number of words (e.g., one or more words) multiplied by the number words in the text area. Different embodiments of the invention compute this estimation differently. For instance, the media editing application may count the number of letters, syllables (e.g., combination of consonants and vowels), words, and/or any combination of these variables; and calculate the estimated time duration.

In some embodiments, the media editing application includes a composite display area for displaying media clips that are part of a composite presentation. To display one or more real-time timing references (e.g., in such a composite display area), some embodiments calculate the estimated duration in the background. For instance, when the composite display area includes a timeline and one or more tracks that span the timeline for holding one or more media clips, an in point timing reference and out point timing reference that represent start and end points of the voice-over clip may be displayed along the timeline. This allow a user of the media editing application to visualize the timing of the voice-over clip with respect to other clips in the composite presentation prior to recording the voice-over clip.

In some embodiments, the teleprompter tool includes a variety of different user interface controls to match the timing of a voice-over clip with one or more other clips (e.g., video clip, audio clip) prior to recording the voice-over clip. One such control is a speech rate controller that controls the rate at which output text is presented in a display area. In some embodiments, the speech rate defines the scrolling speed of output text as mentioned above. By setting the speech rate (e.g., anywhere along a defined range), a user can customize the scrolling speed of the output text to match the natural speech rate of a narrator reading the voice-over script. 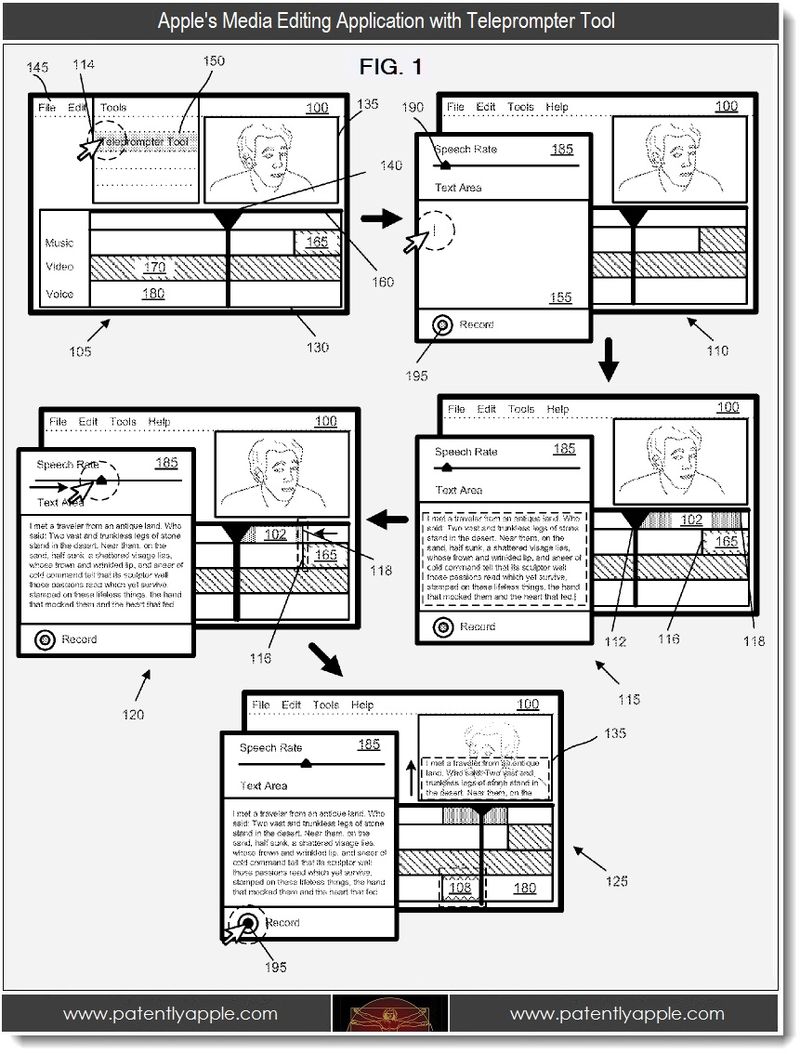 The Five Key Stages of the New Teleprompter Tool

For some embodiments of the invention, FIG. 1 illustrates a graphical user interface 100 of a media editing application with such a teleprompter tool 185. This figure illustrates the GUI at five different stages 105, 110, 115, 120, and 125. In particular, these stages show how the teleprompter tool could be used to create a voice-over content for a composite presentation.

In the first stage, the user has specified a starting location for a voice-over clip by moving the playhead 140 (e.g., through a cursor click and drag operation) to its current position. The second stage 110 shows the GUI after the user's selection of the teleprompter tool menu item 150 through the cursor 114. The third stage 115 shows the GUI after the user inputs text into the text area 155. The fourth stage 120 shows an adjustment of the speech rate controller 190 to match the timing of the voice-over clip with the music clip.

Apple's patent FIG. 2 illustrates an example media editing application that implements the teleprompter tool with scrolling text and so forth. As the patent earlier notes, the media application is likely to be derived from iMovie and Final Cut Pro. 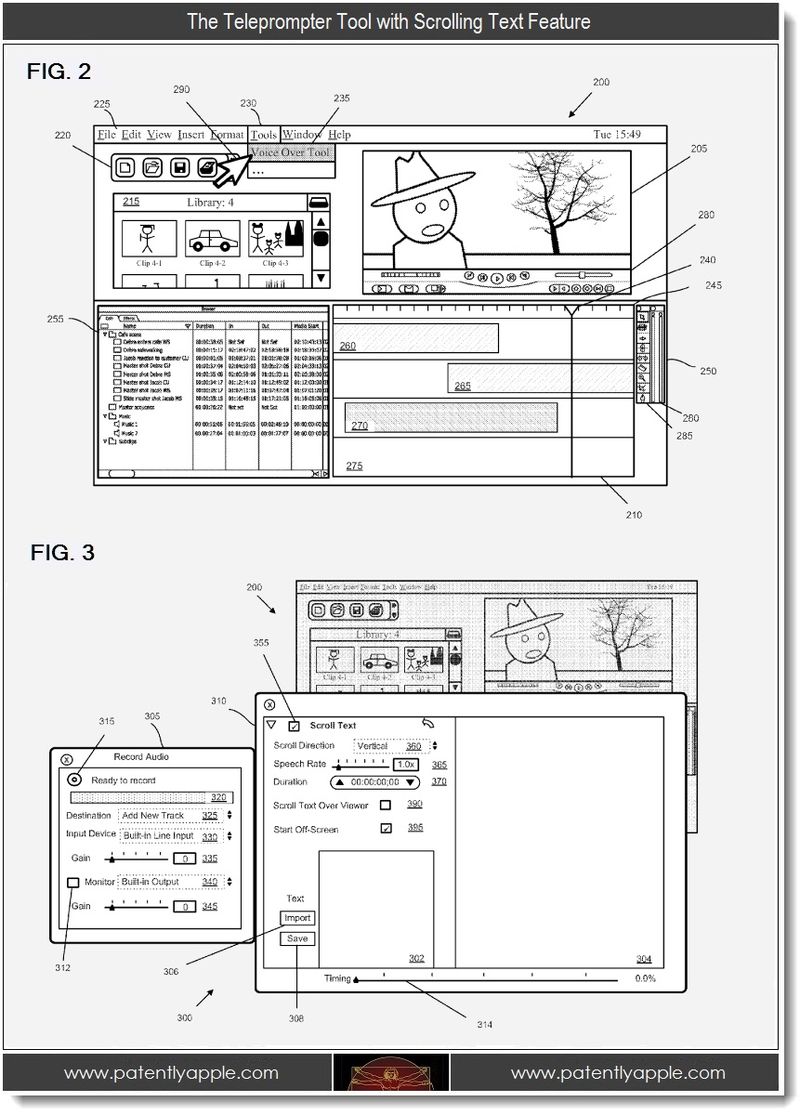 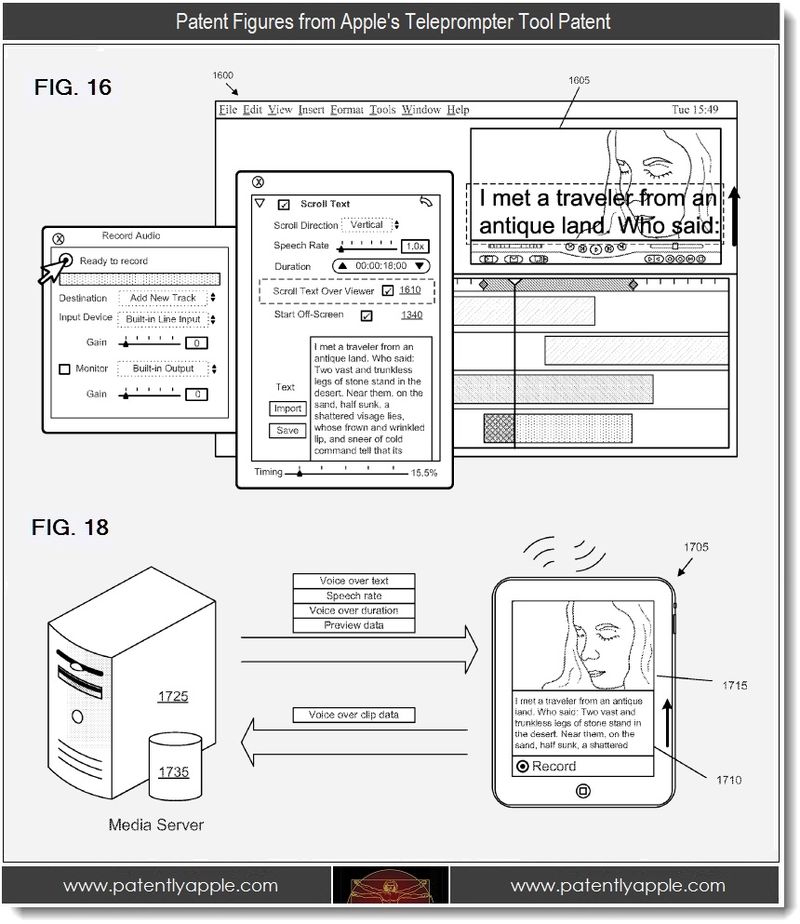 Apple's patent FIG. 21 shown below is considered a conceptual software architecture of an application. In some embodiments, the application 2100 is a media editing application for creating a media presentation using one or more media clips. (e.g., audio clip, video clip, text overlay, picture, and/or other media). The design illustrates a teleprompter tool and related features. 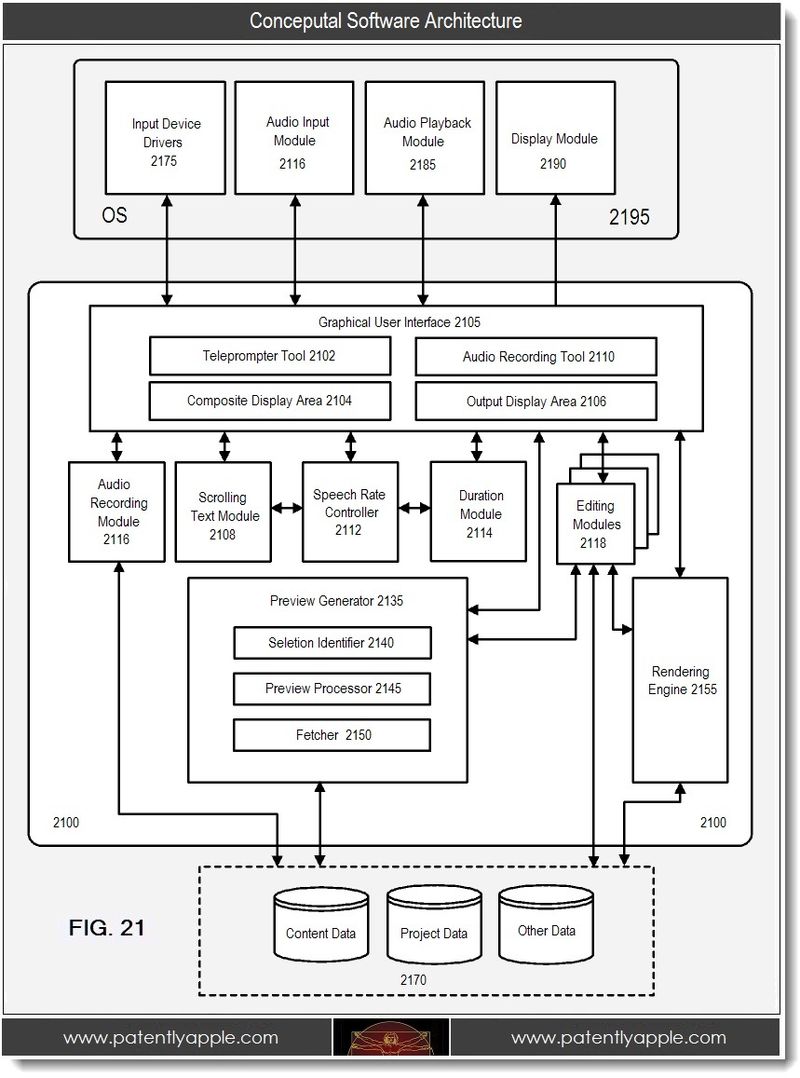 An Interesting Invention from Sprint for the iPhone 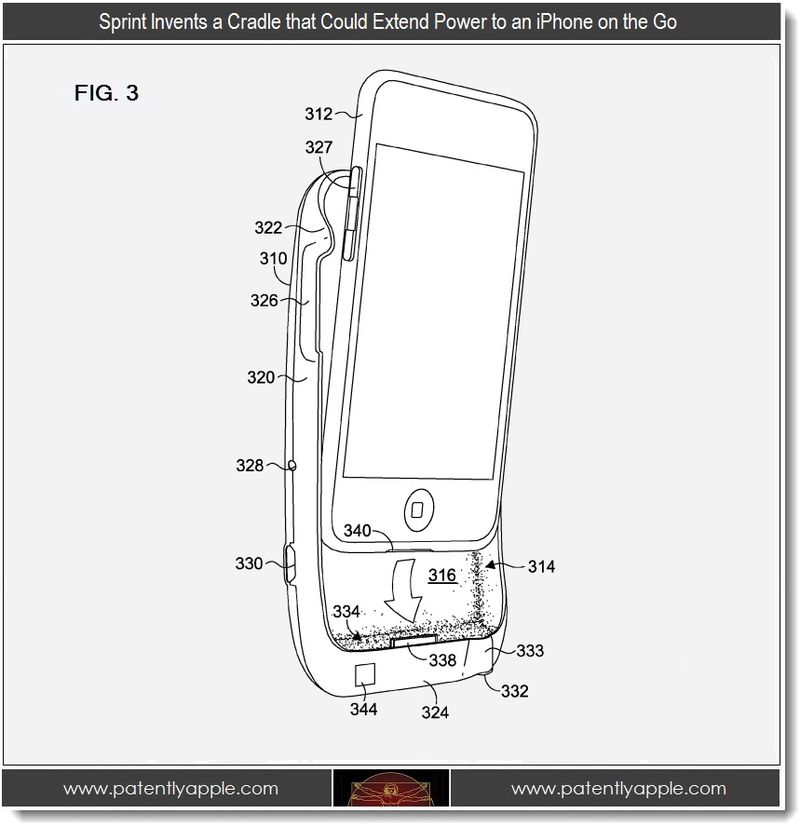 It was reported earlier this week that Sprint Nextel posted a wider quarterly due to the higher costs of selling Apple's iPhone. Perhaps Sprint is hoping to sell a ton of these new power cradles to new Sprint-iPhone subscribers in the future to help them turn a profit. Time will tell. For now, it's an interesting idea of having a mobile powered cradle to keep you powered up until you could get back home or your hotel suite to recharge your device.

My app, Universal Prompter, that available at App Store about one year, contains literally same controls for speed and duration of a speech. Funny enought that I am developing an app for videoblogging with functionality very similar To described in this patent.