On February 16, 2012, the US Patent & Trademark Office published a patent application from Apple that revealed an all new binding protocol designed to allow users to automatically or manually bind attachments easily to a phone call or even a voicemail message. Additionally, the media could be transferred during or after the phone call. Another feature describes how sent photos, for example, could automatically be opened on the receiving end in a photo viewer or editing application. Today's report illustrates several interesting iPhone interface features associated with Apple's new binding protocol. This is an extremely practical patent, especially for social networking types wanting to share photos quickly and conveniently with their friends and those in the enterprise that need to exchange documents on the go with their office and/or clients.

Modern mobile devices may include a variety of communication applications, such as telephony, text messaging and e-mail. These applications often include a contacts database or "address book" containing telephone numbers (e.g., work, mobile, facsimile) and e-mail addresses of contacts known to the user of the device. The user can access the contacts database on the mobile device to simplify and quicken communication with the known contacts (e.g., friends, family, coworkers, and clients).

Apple's Invention: A New Binding Protocol for the iPhone

A Binding Protocol could be Active or Lazy

The binding protocol can be active or lazy. In lazy binding, the call participant can select the desired media for transfer before the voice call is established, and subsequently mark the media for binding with the voice call.

In some implementations, a computer-implemented method can be performed by one or more hardware processors of a mobile device. The method includes: detecting an ongoing voice call; automatically binding media to the voice call; receiving a request to transfer media; and transferring the media to a call participant based on the binding.

Other features include various user interfaces for implementing active and lazy binding protocols, and for generating and persistently storing binding data on the communication device or on a network storage device to allow the transfer of media items during or after the voice call. The media or a reference to the media can also be stored for downloading the media to call participants. A log of transfers of media bound to voice calls can also be maintained. 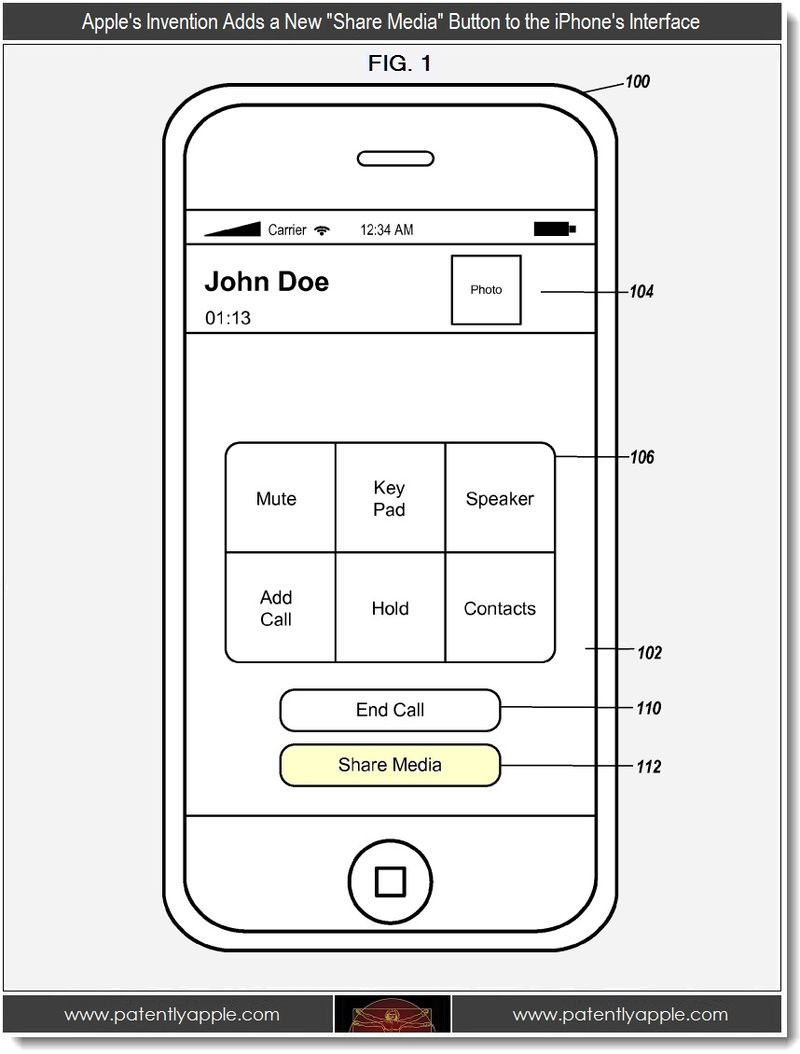 Apple's patent FIG. 1 illustrates an exemplary user interface of a telephony application displayed during a voice call. In some implementations, the communications device (in this case an iPhone is illustrated) includes display surface 102 for presenting call control interface 106.

It should be noted that a "communication device" can be a mobile device, e-mail device, game console, television screen, personal computer, electronic tablet, media player or any other device with communication capability. The display surface can be a touch sensitive surface capable of responding to multi-touch input with one or more fingers or a stylus. A call information region 104 can display the name and photo of the called party (e.g., "John Doe") and the elapsed time.

In the example shown in FIG. 1, the iPhone has placed a call to John Doe and the call has been ongoing for 1 minute and 13 seconds. The user desires to bind media to the call. This type of binding are referred to as "active binding."In active binding, the call participant can select and transfer the desired media item during the voice call, and the media item is automatically bound to the voice call.

Media can include any information or content in any known digital format, including but not limited to: photos, videos, audio files, documents, contacts, calendars, emails, video voicemail, web pages, ringtones, links, multimedia messages or presentations, call logs or records, forms or any other information or content that can be transmitted between two or more devices.

To bind media to the call, the user can invoke the call control interface that we're used to today which presents control functions such as Mute, Key Pad, Speaker, Add Call, Hold and Contacts. What's new here is highlighted in yellow on Patent FIG. 1. It's a new "share media" button 112 which invokes user interfaces for a binding protocol that allows media to be bound to the voice call.

In some implementations, the media can be a HTML or XML file or any other code, script (e.g., Java Script) or instructions for generating a user interface for presenting information to the called party or receiving input from the called party during the voice call. For example, a banking institution can send a file that causes a Personal Identification Number (PIN) pad to display on a customer's device during a call with a customer service representative of the bank. The customer can enter his or her PIN to authenticate the customer over a secure data communication channel independent of the voice call channel. Such a feature is being designed with the iWallet in mind. 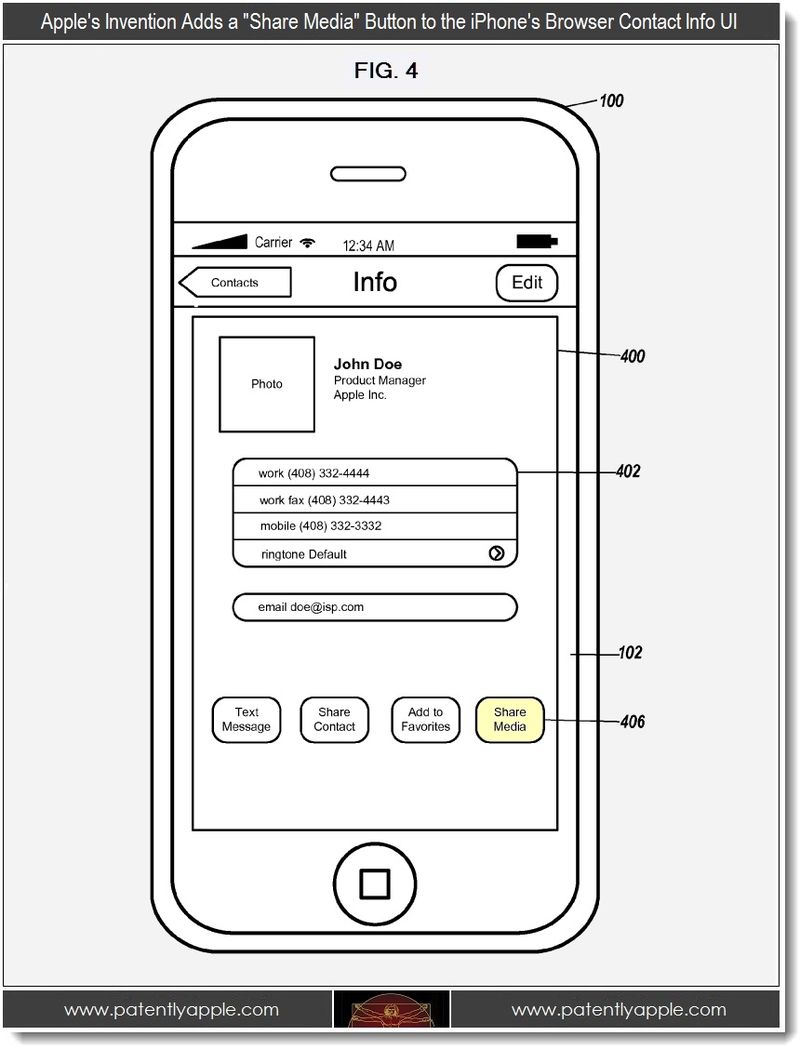 The "Share Media" button 406 navigates the user to the user interface of FIG. 2 (shown below), where the user can perform the same binding protocol steps as for active binding.

Apple's patent FIG. 5 noted below illustrates an exemplary user interface of an iPhone application for receiving media items during an ongoing voice call. In this example, the iPhone notes receiving 2 media items (which are photos 302 and 304 of patent FIG. 3A above.

Apple's patent FIG. 6 illustrates an exemplary user interface of an iPhone application for accepting or denying media items bound to an incoming call. In this example, the iPhone is operated by John Doe who has received an incoming call from Jane Doe. A visual indicator 600, represented by the large clip icon, is displayed in the call information region 104 to indicate that the voice call is bound to two media items. In this example, an image viewer or photo editing application can be automatically invoked when the button 604 is selected.

In other implementations, the media items can be stored for future retrieval after the voice call has concluded. The preference for automatic invocation or storing for later invocation can be an option selectable by a user in a call settings menu or other suitable input mechanism. 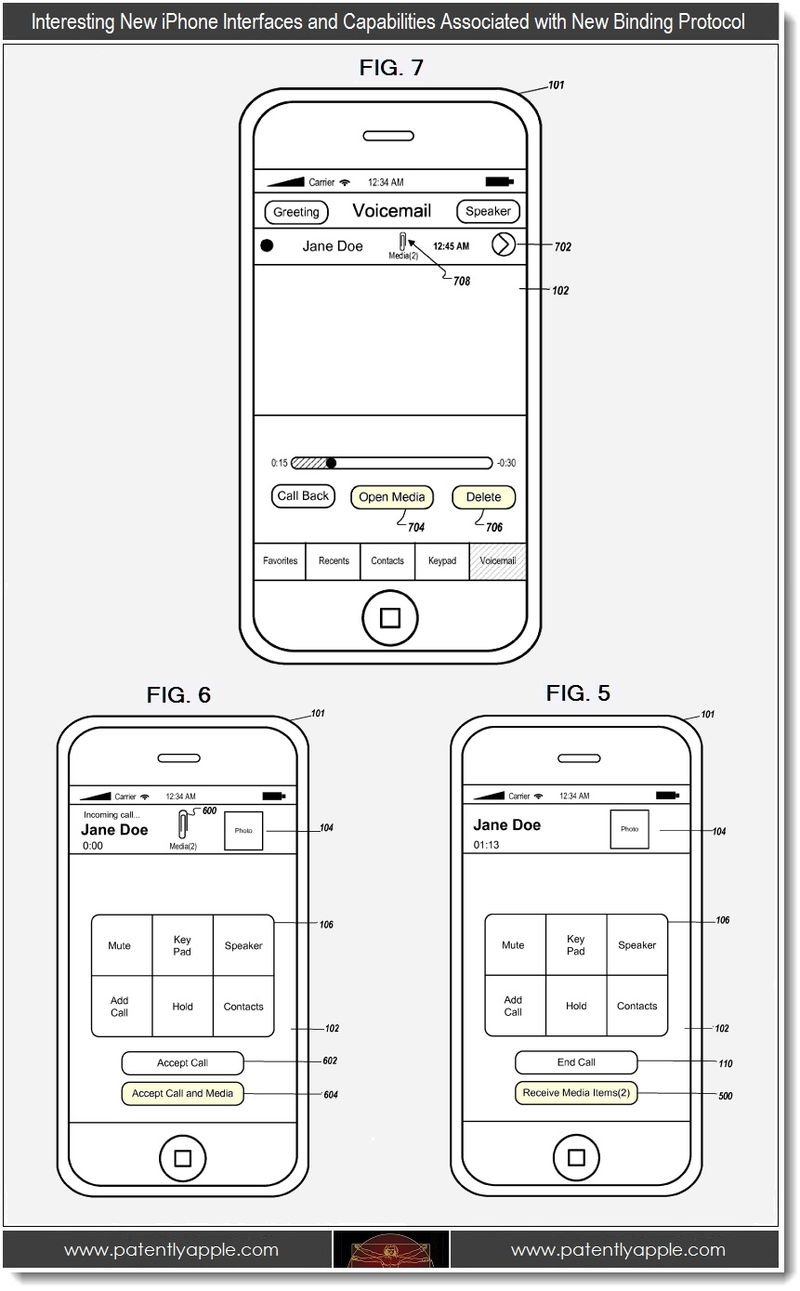 Next Generation Voicemail will allow you to Send Attachments

This sounds very similar to http://thrutu.com/

Beautiful!
Now... start the clock on how long it takes the IP pirates at Shamsung to duplicate the functionality...