According to patent records, Apple has been dreaming and working on the smart bezel since 2005 – which actually predates the iPhone. In 2010, the smart bezel project began to gather some real steam and today the project takes an interesting twist. The difference this time around, is that touch zones aren't being limited to just the bezel. No, this time around, Apple is considering the use of touch zones on any surface that makes sense for a given application, be it the iBook or video games. It could equally be applied to an iPad or a television. Now that Apple has proven that touch zones actually work by releasing their Magic Trackpad into the market in 2010, Apple seems to now think that it's time to advance this technology to iOS devices. When you add this specific patent to the other great inventions published today covering coded magnet applications and a new 3D GUI option, it's clear that Apple has some definite plans of taking iOS devices to the next level in the coming years. Let's hope that the Crazy Ones push some of these great ideas to market sooner rather than later.

For touch-sensitive displays, the detected contact area of a finger is typically converted to a coordinate tuple (an (x, y) position or point) – or vector space. The coordinate tuple is then used (like the point of a cursor in a device with mouse-based input) to interact with and manipulate the user interface objects on the touch-sensitive display.

With existing touch targeting methods, the conversion of the two-dimensional finger contact area to a one-dimensional point (e.g., coordinate tuple) is problematic. The centroid of the finger contact area typically does not correspond to the location that a user perceives is being touched. This may cause touch targeting errors when trying to activate keys on a virtual keyboard or interact with other objects on the touch-sensitive display. The change in viewing parallax in different areas of the touch screen and the differences in contact areas between thumbs and other fingers may also lead to touch targeting errors and incorrect manipulations. Undoing erroneous manipulations and repeating touch inputs creates a significant cognitive burden on a user and may lead to user frustration. In addition, correcting touch inputs takes additional time, thereby wasting energy. This latter consideration is particularly important in battery-operated devices.

Apple's invention meets the need for electronic devices with touch-sensitive displays to have more accurate and efficient methods and interfaces for determining a coordinate tuple of a touch-based input that corresponds to a user's intended input. Such touch targeting methods and interfaces reduce the cognitive burden on a user and produces a more efficient human-machine interface. For battery-operated computing devices, such methods and interfaces conserve power and increase the time between battery charges.

The above deficiencies and other problems associated with user interfaces for electronic devices with touch-sensitive displays (also known as "touch screens" or "touch screen displays") are reduced or eliminated by the disclosed devices that also include touch-sensitive surfaces that are distinct from the touch-sensitive displays. The patent relates to a desktop computer, notebook, iPad, iPhone and iPod touch. In some embodiments, the desktop could have a touch display or it could use a device like the Magic Trackpad. 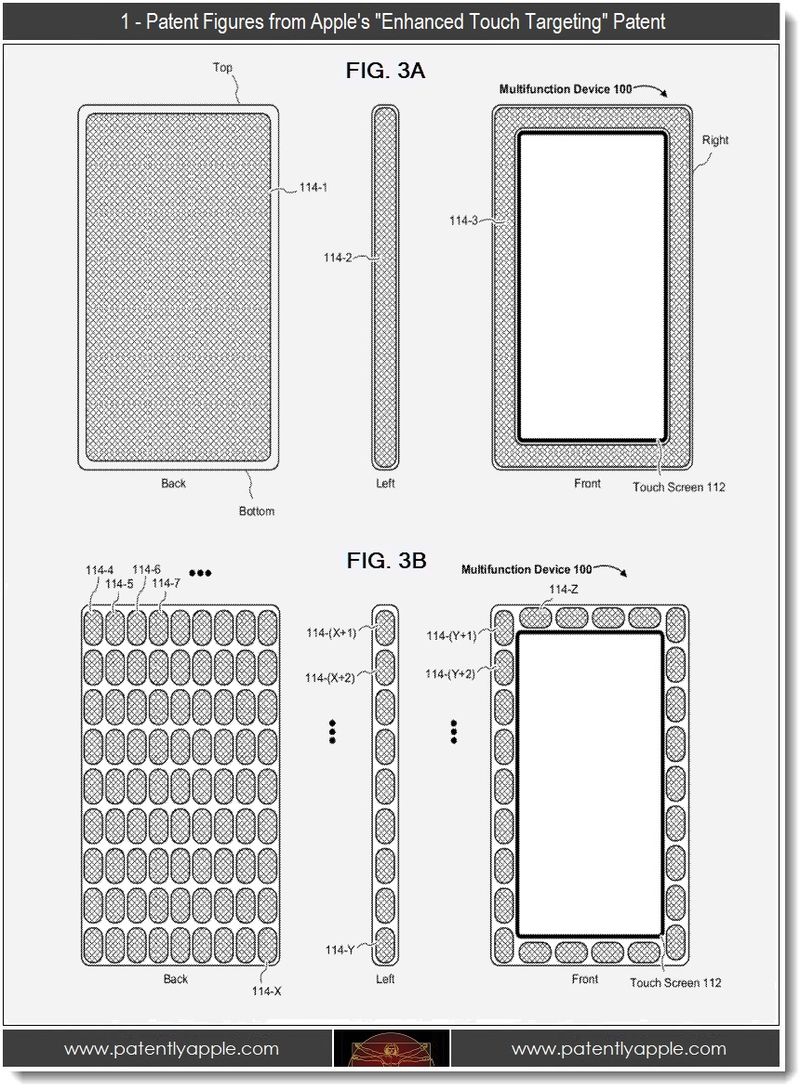 Depending on the device, Apple could choose what areas of a device to apply an extended touch surface. A superior example of such a touch zone could be found in Apple's granted patent as shown below. Here Apple envisions an iPad having rear side controls for books or games. The zones could be applied in a block or they could take on various shapes and sizes as noted below. 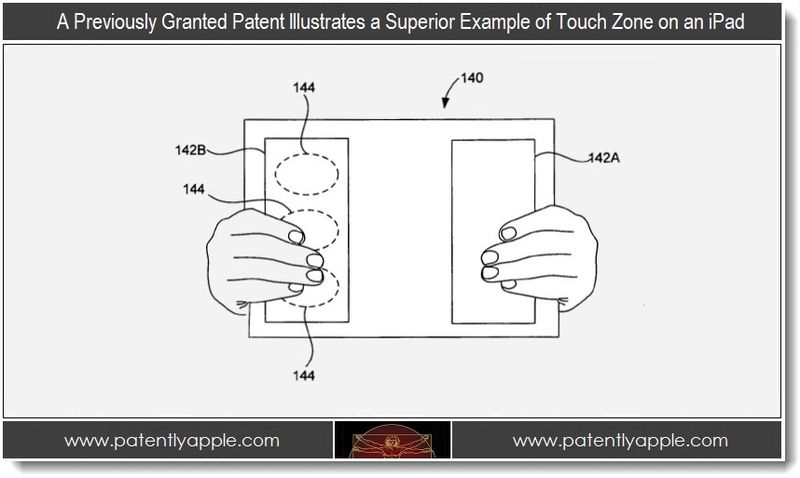 Apple's patent application was originally filed in Q3 2010 by the sole inventor Nima Parivar. For related patents, you could review our smart bezel archives. 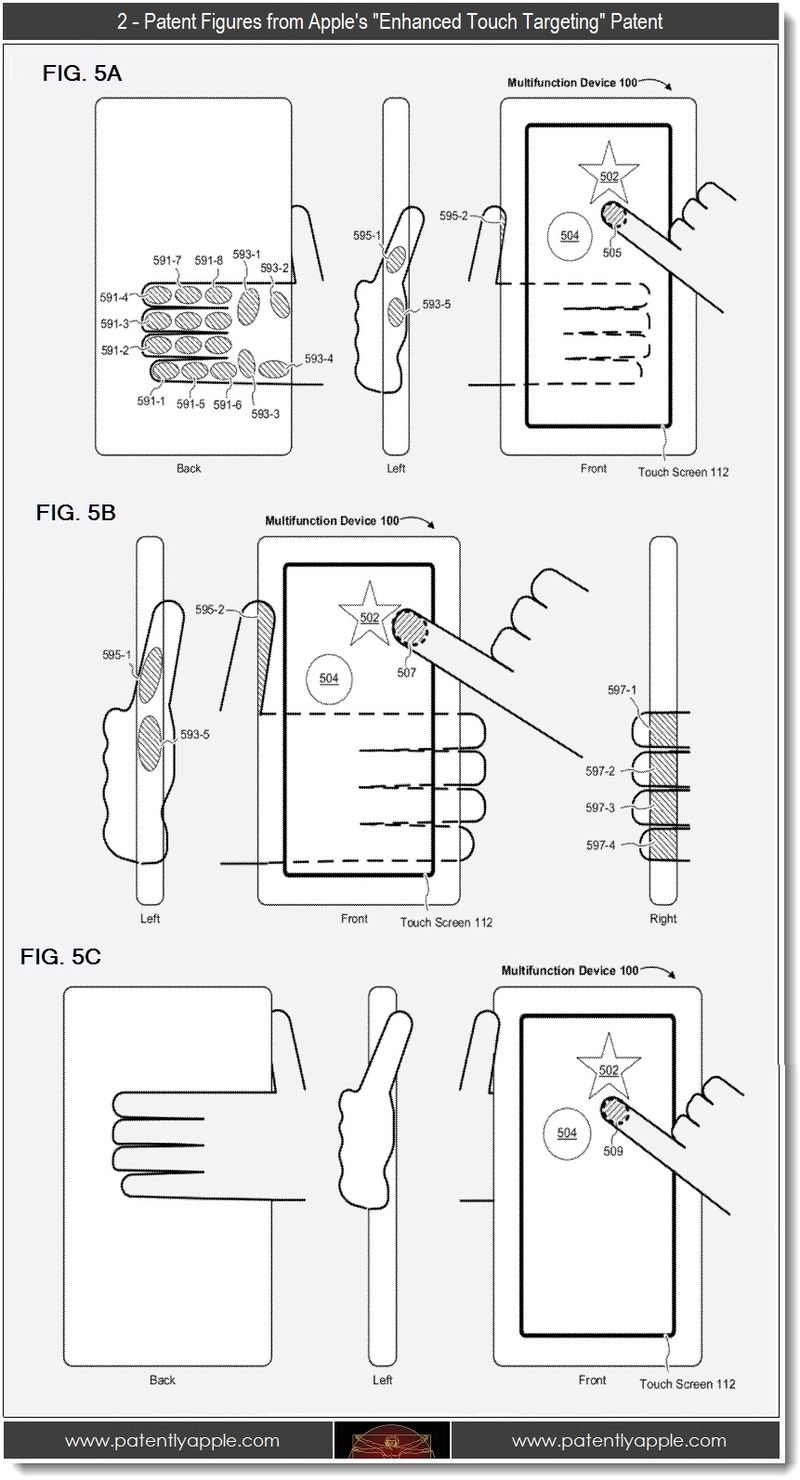 This functionality reminds me of the Playstation Vita. The Vita has a touchscreen on its back that allows users to make gestures with their fingers while playing to do actions (i.e. climb a rope, pull things apart, slide objects).

It will be very interesting to see if and how different devices across the tech field will converge.

Interesting to consider how this kind of interface may be one of the key things that defines how large these devices can be, especially for a phone which - at Apple at least - can be used single-handedly. For something the size of an iPad, the issue is moot, but for a phone to have responsive touch zones underneath both the ball of the thumb and the fingertips of one hand, there's obviously a maximum size, especially when you're trying to meet the needs of the "average" hand size (whatever that might look like).