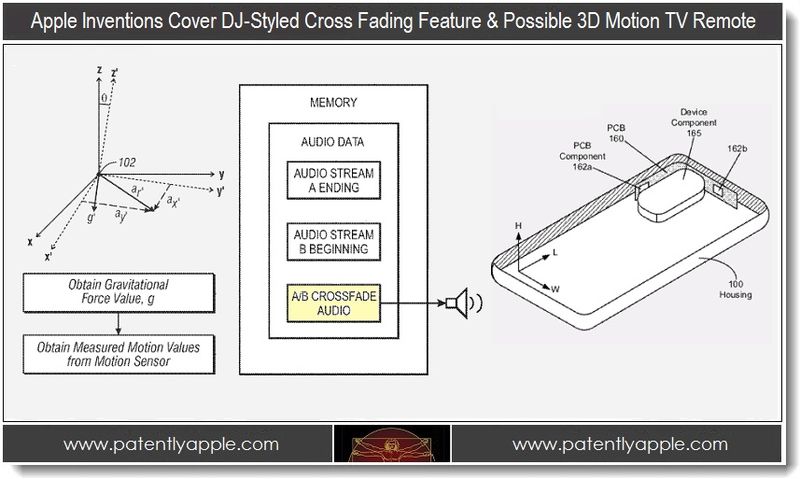 On February 23, 2012, the US Patent & Trademark Office published a series of very interesting patent applications from Apple that reveal a wide range of technologies. Those covered in today's report include a new beat-matched crossfading DJ-Styled feature for Macs and iOS devices; advances in 3D motion technology that could be used in a future version of Apple's Magic Mouse or TV remote; new advanced dual image sensors for future iOS cameras and a peek at a few iPhone technologies that will accommodate even thinner iOS device designs in the future.

Portable electronic devices are increasingly capable of performing a range of audio operations in addition to simply playing back streams of audio. One such audio operation, crossfading between songs, may take place as one audio stream ends and another begins for a seamless transition between the two audio streams. Typically, an electronic device may crossfade between two audio streams by mixing the two streams over a span of time (e.g., 1-10 seconds), during which the volume level of the first audio stream is slowly decreased while the volume level of the second audio stream is slowly increased. 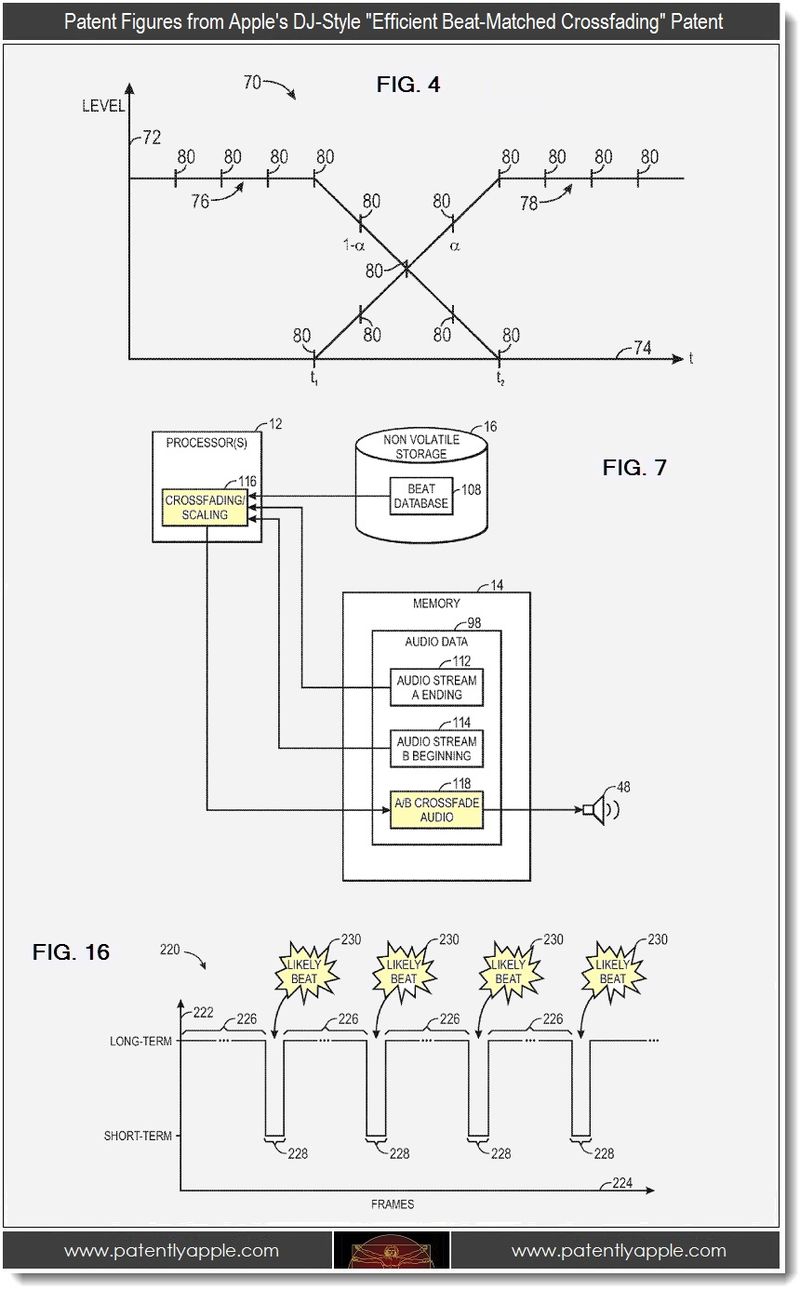 About Apple's Patent Figures: FIG. 4 is a schematic diagram of two audio streams during the crossfading operation; FIG. 7 is a schematic block diagram representing a manner in which the electronic device may perform a beat-matched crossfading operation; and FIG. 16 is a plot modeling a relationship between time window sizes over a series of frames of frequency data and the likely location of beats therein.

One: A Composite Microphone Boot 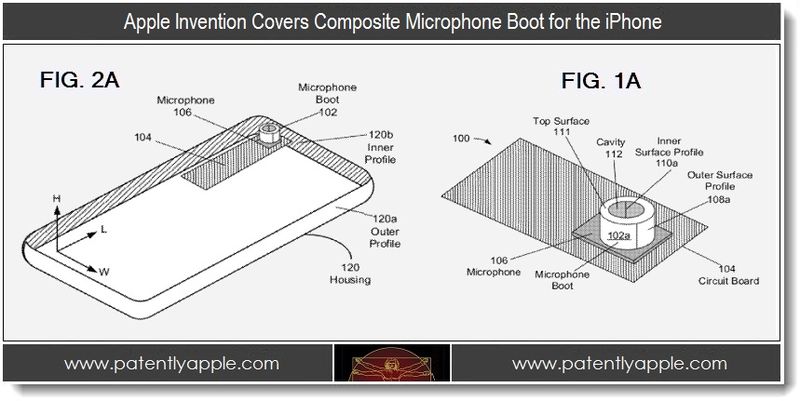 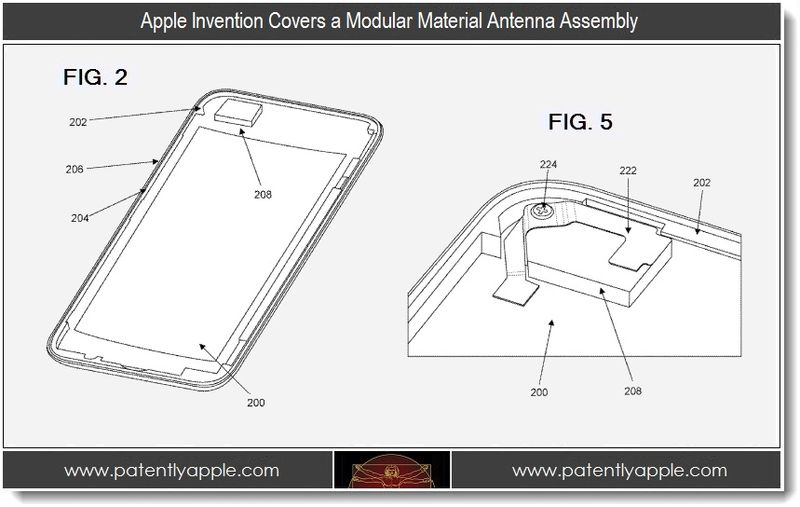 Broadly speaking, Apple's invention describes printed circuit board (PCB) well suited for use in consumer electronic devices, such as laptops, cellphones, netbook computers, portable media players and tablet computers. In particular, PCB designs are described that address packaging issues that can result when a light-weight consumer electronic device with a thin and compact enclosure is used. Methods for designing and forming the PCBs are described in this patent application. Apple's patent FIG. 3A illustrates a view of a bendable printed circuit board. In a particular embodiment, a relatively thin multi-layered PCB for use in a portable computing device can be provided. The multi-layered PCB can be formed in a planar configuration. During assembly of the portable computing device, the PCB can be bent in certain regions to allow it to be installed in a non-planar configuration. The bending capabilities can be used more efficiently fit the PCB within available spaces remaining in the enclosure after larger components, such as the battery are installed. You could find more details in Apple's patent application 20120044637.

Apple is constantly advancing the cameras that are present in their OS X and iOS hardware. Today, Apple reveals their proposed dual image sensor processing system. According to Apple, their new image processing system may include control circuitry configured to determine whether a device is operating in a single sensor mode (one active sensor) or a dual sensor mode (two active sensors). 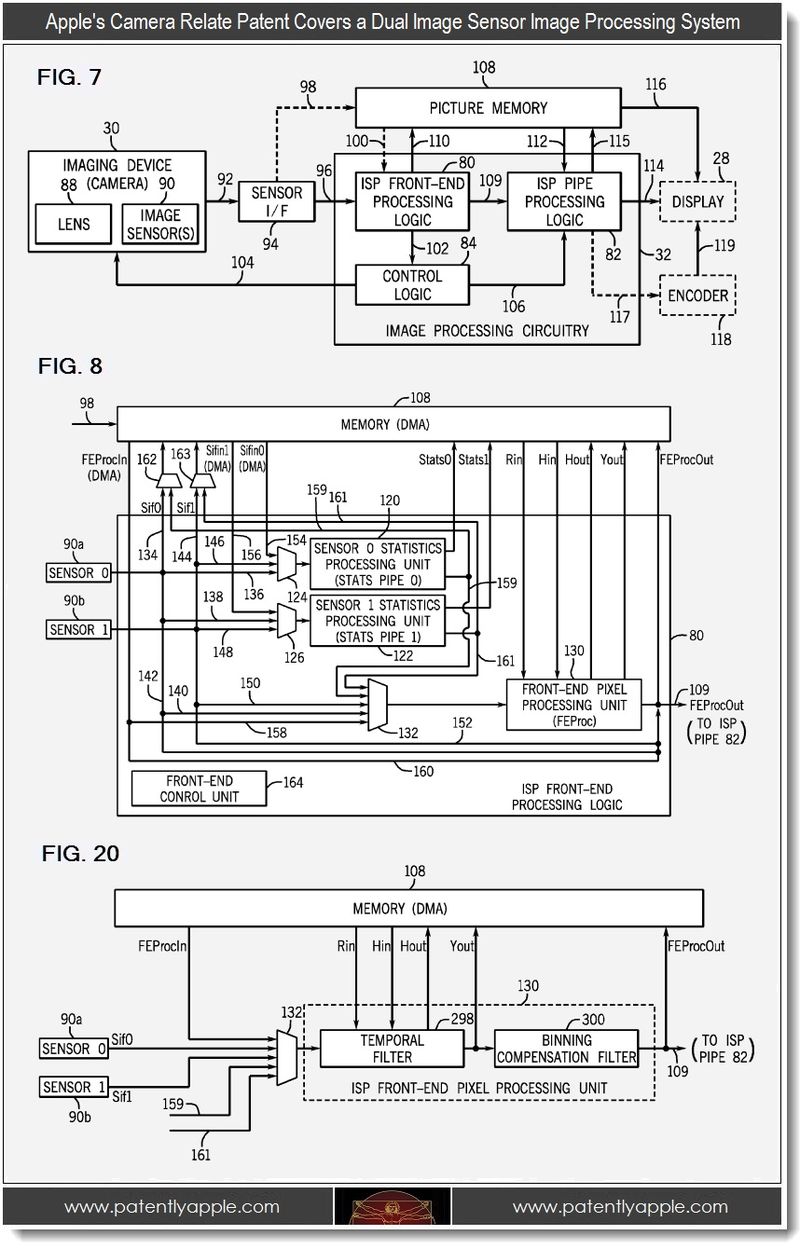 Apple's patent is a massive work with over 79 patent figures and incredible detail. Those interested in exploring this patent should explore patent application 20120044372.

And lastly, Apple is adding a little more to their January 2010 patent application that we covered in a reported titled "Apple Could Advance Gaming & Paint in Magic Mouse Upgrade." In patent application 20120046902, Apple describes a future magic mouse and method for correcting errors in acceleration due to a deviation from a horizontal plane of motion by correcting for gravitational acceleration components due to the deviation in the plane of motion.

Apple states that many existing methods for tracking two-dimensional motion with accelerometer-based devices like a mouse don't adequately take into account variations in three-dimensional orientation. For example, an orientation change of only about 0.5 degrees from the horizontal plane can contribute up to 10 mG acceleration in a plane of motion, which can be significant with respect to human initiated motion. Therefore, there is a need for systems and methods that account for a tilt in a plane of motion so as to provide a result that is more indicative of a user's intended motion of the input device. 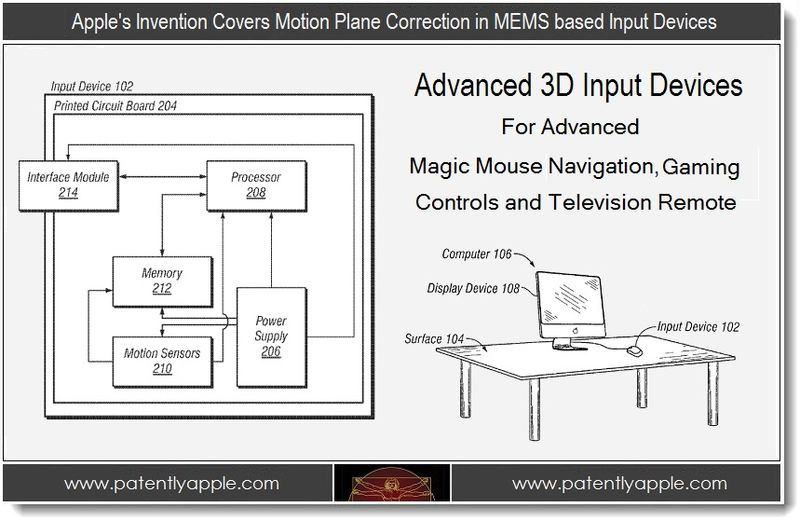 Another patent on this subject matter was covered in our February 2010 report titled "Apple Wants the Magic Mouse to Rock'n Roll!" Update 2PM: You could get another view of what Apple is thinking of in our April 2010 report titled "NFC iPhone to Control All of Your In-Home Electronics & More." In that report you'll see one option of the TV remote simply being a future iPhone controlling the same devices listed below. You also get a great visual of what a 3D-Motion remote could do - like turn items on screen. So this isn't about a remote for 3D TV as much as it is a 3D motion related patent. It's technology that could be added as a feature of a next generation HDTV remote.

Today's invention could be, according to Apple, used as a mouse, receiving device or receiver which they translate to being video game consoles, set-top boxes, televisions, personal computers (whether desktop, laptop, or otherwise), digital video recorders, communications equipment, terminals, mobile devices such as the iPhone and display devices. Hmm, a TV Remote with advanced 3D motion; add that to Siri based voice controls and you have a killer TV remote that will rival what Google has up their sleeve.