The Top Ten Apple Patents that Made Waves in 2011 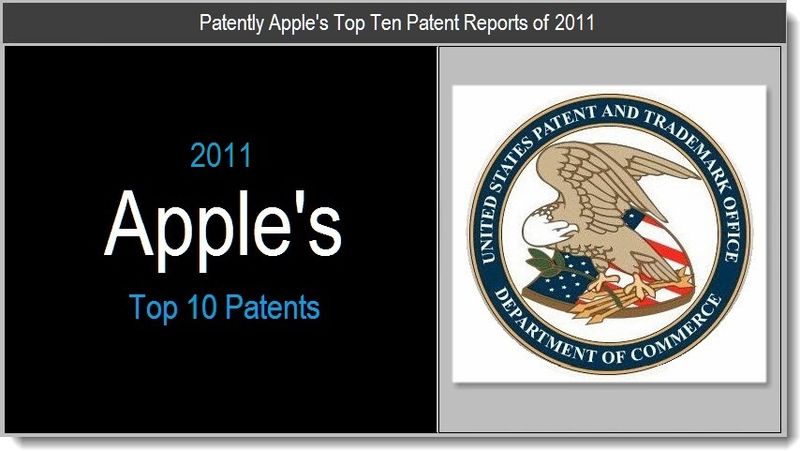 As we kick off 2012, it's time to look back at the top ten Apple inventions that came to light in 2011. If you're wondering which ones made waves in 2011, I think that you'll be as surprised as I was. Many patents that I thought would make the cut didn't, while others that I thought at the time were just average – rose to the top. Beyond raw data, we also saw new trends emerge in 2011 that covered such matters as smart pens, smart bezels, the telephonic MacBook and augmented reality. Another observation that we made this past year through reviewing patent applications was that Apple put a lot of time and energy into crafting future iOS device camera features. Anyways, enough with the talk and on to the top ten patent applications of the year!

The Top Ten Fifteen Patents of the Year

Once again the Mac Community gets to celebrate Apple's spirit of invention as it empowers and inspires us throughout the year. To our surprise, there wasn't a clean path to reaching the top ten patents of the year as there were several major ties for spots eight, nine and ten. Then again, the more the merrier, as they say. Starting at number ten, the top patent applications of the year are:

Apple Invents New Flat Keyless Keyboard for Desktops & More; (B) Apple in the Sky with Diamonds: A Cloud Based Safe Deposit Box; (C) Apple Takes Huge Steps towards a Graphics Pen for iPad

Apple to Advance iPhone with both Text-to-Speech & Speech-to-Text Converters May 12, 2011

Our Methodology for Choosing the Top Ten

Our methodology for choosing the top ten is simple: It comes down to how many of the Mac Community's top writers and thinkers chose to write about one of our reports about Apple's powerful and creative ideas. The more the global community supported one of our reports, the higher the score. Each website equals one referrer and each referrer equals hundreds to thousands of reader views. At the end of the day, consider this system to be the "People's Choice Awards" for patents. Patently Apple would like to take this time to thank the global Mac Community for their support. Millions of people around the world have read about Apple's great inventions because of you.

Controversy, Misunderstanding & Some Favorites that Didn't Make the Cut

The most controversial Apple patent of the year goes to the one that rose to number one in a heartbeat. The Super Sensitive Left Wing groups of this world united against Apple's patent, fearing that Apple's technology could be used for nefarious reasons by government agencies. The Washington Post stated at that time that a group called "Save the Internet" (with a base of two million) had sent a petition to Apple requesting they not proceed with this patent application feature. I'd personally like to see the technology play out on the iPhone in the manner that was set out in the patent so as to see the benefits of the technology before trying to kill it off out of sheer paranoia.

Yet on the flipside, we saw an incident arise in August of 2011 (that was unrelated to Apple's iPhone or technology) that demonstrated how governing bodies could overstep their authority. Yes, technology could always be used for both good and evil but stopping progress isn't always easy. Admittedly, everyone has the right to weigh in when they think that technology, technology companies and/or governments use new technologies to erode freedom of speech and/or invade our privacy. I for one question many of today's revolutionary technologies that are disruptive and that edge into my private life. But that's a story for another day.

On a surprising note to some, continuing R&D spending went into smart pens, contrary to what Apple fans believe. If you read the biography of Steve Jobs by Walter Issacson, then you know just how much that Steve absolutely hated the stylus. The thing is however, that smart pens aren't styluses. That's like saying that because Steve Jobs hated the Newton that they'd never ever enter the tablet market again. Well, we know where that logic ended up (Ha!). Though to be fair, time will be the final judge on whether Apple will ever bring a smart pen to market. I personally hope that they do.

On a lighter note, there were a few patent favorites of mine that just didn't make the cut this year, as there are every year. Six hot patents that I thought should have made it to the top ten this year include: 1) Apple's Wild New 3D Gesturing is Aimed at CAD, Avatar Creation & More;  2) Apple Invents Digital Device Handshake using Next-Gen Cameras & Invisible Inks;  3) Apple's Revolutionary Smart Bezel Project Gains a New Chapter, 4) Apple Wins Patent for Telephonic MacBook with Rotatable Display, 5) Apple Considers New Hovering Capabilities for Future iOS Displays and 6) Apple Devising Smart Hybrid e-Paper/Video iOS Displays. Some of these came very-very close to making it, but no cigar. I'm sure that there were many other patents that you thought should have made the top ten for 2011, and you're free to make those known in the comment section below.

It's 2012 and we're off to the races in discovering what new technologies that Apple is working hard on. It's also a year that Apple's entire lineup is to be refreshed, according to multiple sources – and we may finally get to see that Apple HDTV come to market. And lastly, with Intel pushing the industry to challenge Apple's MacBook Air, we just might see that telephonic MacBook come to market sooner rather than later – just to stay a step ahead of the pack once again. 2011 was a great year for Apple innovation and we're going to see a lot more of it in the coming weeks and months ahead. Until next year: Cheers!