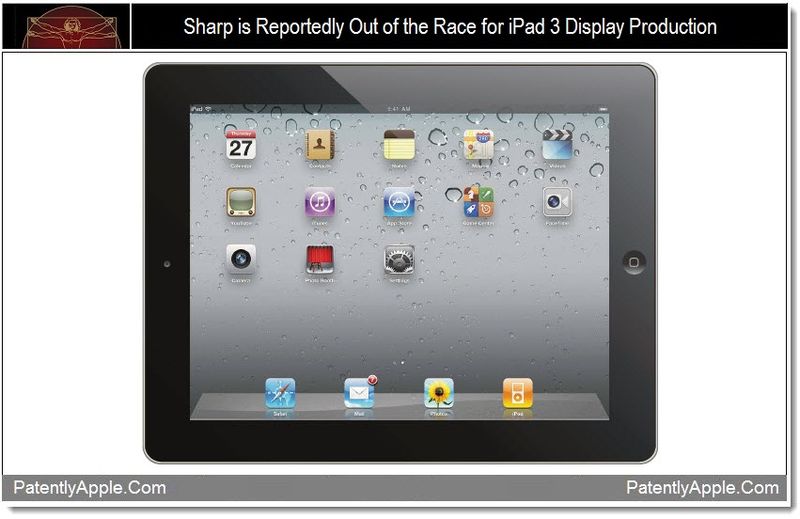 According to Korea's Electronic Times Internet News, it's been confirmed that Samsung Electronics and LG Display will supply LCD panels for Apple's iPad 3, which is scheduled to be unveiled as early as in Q1 this year. Sharp was originally known to be developing display panels, but reportedly failed in initial supply.

This same report goes on to state that "Sharp has competed with Samsung Electronics and LG Display over the development of display panels for the iPad 3, but reportedly failed to pass Apple's approval process for mass production. Sharp has worked on developing high resolution panels on the basis of oxide semiconductor TFTs."

In a report that we posted on December thirtieth, it was being rumored by DigiTimes that their sources believed that Apple was going to replace their IPS displays with those using IGZO technology from Sharp. Today's news doesn't necessarily contradict the rumor if Apple and Sharp are working on a future generation HDTV.

Yet as far as Sharp Electronics being an official iPad 3 display supplier for at least the first half of 2012 is concerned, it now appears to be in doubt.

According to ETN's industry sources, Apple plans to procure at least 65 million LCD panels for the iPad 3 this year. The quantities of LCD panels supplied by Samsung Electronics and LG Display in Q1 are estimated to be over 5 million LCD panels to meet the demands of the initial iPad 3 launch.

In other Apple news out of Korea, the iPhone isn't selling that well. According to ETN, the iPhone4S which was released in Korea on November 11, 2011, hit the 500,000 mark in terms of domestic sales. Although it's no small number, it's somewhat eclipsed by the records of its predecessors iPhone3GS and iPhone4. For more details, read this report.