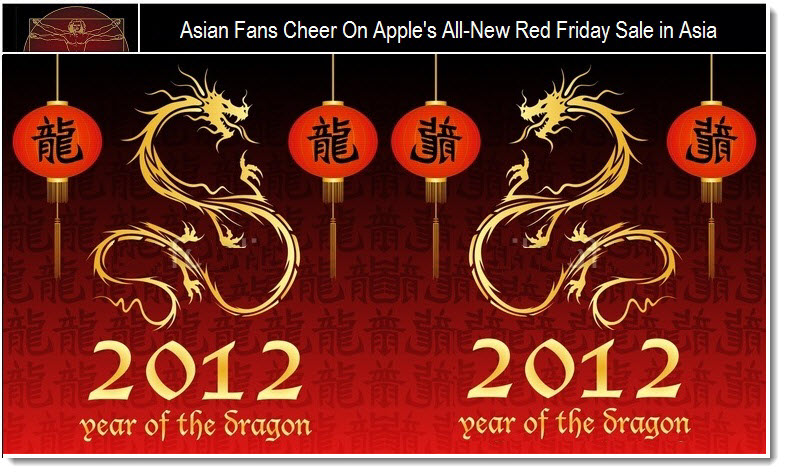 News from Focus Taiwan today quotes Apple as advertising the following: "Shop for Year of the Dragon surprises ... There's not a moment to lose. Today only, we're offering special pricing on Apple gifts."

Focus Taiwan goes on to state that "Apple fans in Taiwan, China, Hong Kong, Thailand, Singapore, South Korea, Malaysia and the Philippines can take advantage of the one-day promotion event.

In the past, Apple has mostly launched its large-scale shopping promotions in the United States and Europe. After racking up remarkable sales during the U.S. "Black Friday" shopping season late last year, however

The unusual shopping event signals that Apple has been becoming more and more interested in expanding its Asian presence, according to market analysts.

For Apple, 2012 will be a critical year, as the world is watching to see whether it can maintain its high-tech game-changing status following the death last October of its legendary co-founder, Steve Jobs, the analysts said."

Although Apple hasn't stated anything officially on this new event as of yet, it would only stand to reason that we'll see Apple continue this tradition as they expand their Apple Store footprint further into China and surrounding Asian countries in the coming years. Marketing wise, it's the right move.

They said the latest revenue report showed the impact from the suspension of its operations in its Suzhou plant of China's Jiangsu Province had faded, adding many investors even have high hopes that the popularity of Apple's iPad and iPhone will further boost the Taiwanese supplier's sales.

Catcher reported Thursday it posted NT$3.25 billion in consolidated sales for December, up 24.6 percent from November and also up 32.8 percent.