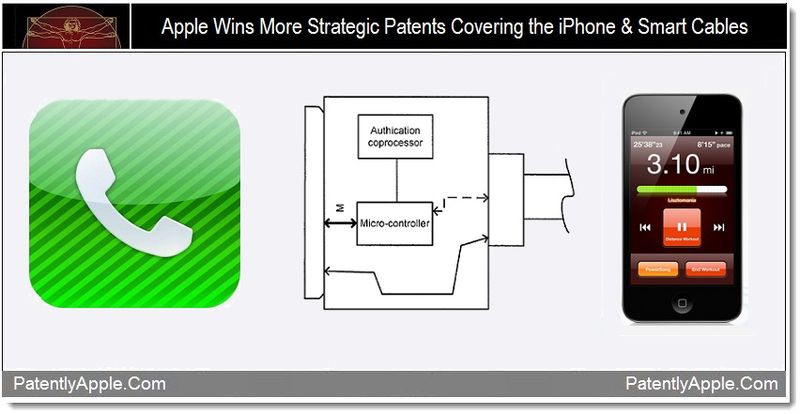 On January 10, 2012, the US Patent and Trademark Office officially published a series of twenty-two newly granted patents for Apple Inc. This morning's patent report covers four of Apple's newly granted design patents covering such things as the MacBook Air and its Solid State Drive. Additionally, our report covers three important patents relating to Apple's original iPhone and associated smart cables. Since late December Apple has been on a roll chalking up original iPhone patents and today's patent wins continue that trend. Considering that there were over 200 patents on the books for protecting the iPhone on the very day that Steve Jobs introduced the iPhone, I would suspect that this trend is going to continue for some time to come.

When we think of the original iPhone, we think of its sexiness, it's groundbreaking multitouch display, its ability to surf the net via Safari, its inventive user interface and new form factor. What we don't think of are the mundane things that are required to make the iPhone both functional and safe.

Yet in respect to iPhone IP, it's certainly important for Apple to get the foundational aspects of the iPhone just right so that consumers could focus on the sexy stuff while their IP is in place to defend against patent trolls and copycats.

In order to appreciate some of the complexities that Apple had to overcome in 2007 in order to bring their successful iPhone to market, we'll review Apple's patent background to understand today's granted patents. One could appreciate Apple's marketing slogan of "it just works." For consumers, the iPhone is just a "magical" experience. But to deliver that magic, Apple had to grok over each and every detail of their smartphone in order to get it just right. In order to get it so right that every competitor wanted to copy it!

To complicate matters further, many computing devices also have multiple possible inputs and outputs for routing audiovisual information. For example, a handheld computing device may have a line-out port, a headphone port, a docking port, a microphone, a line-in port, a wireless connection, and multiple built-in speakers, each of which may serve a different function and have different capabilities.

One way to handle the contention among the applications for the playback resources of a computing device is to design each application with logic to check the state of settings of the device and decide for itself where, when, and how to play its audiovisual information. Unfortunately, using this approach, each software application developer must implement code for a behavior tree that attempts to take into account the variety of factors that could impact media processing on a device. The result may be less-than-optimal media handling decisions made by more-complex-than-necessary applications.

Further complicating the routing of audiovisual information, it may be desirable to have the information processed in specific ways under specific circumstances. For example, when music and voice audio are to be played concurrently, it may be desirable to mix the music and voice audio in a particular way. Typically, such custom treatment of specific cases would be hard-coded into the logic of the software and/or hardware components involved in the playback. Hard-coding such customizations significantly increase the complexity of a devices software and/or hardware components.

Additional complications arise when a device is connected to one or more wireless inputs or outputs, such as Bluetooth headsets. While many conventional devices simply assume that audiovisual information should be routed through wireless connections whenever possible, a user may often prefer not to route audio through a connected device. For example, the user may have inadvertently entered into the range of such a device. Many conventional devices would automatically assume that audio should be transferred to the wireless device, even though the user may in fact not be in a position to even hear the device.

Further complications arise in managing certain accessory devices that include several logical inputs or outputs--such as Bluetooth headsets that implement multiple audio protocols--or in managing groups of inputs and outputs that have complementary uses--such as a headset and a microphone. Users and software developers alike find management of such groups of inputs and outputs confusing and tedious.

In a nutshell, Apple's patent relates to a centralized resource manager that manages the routing of audio or visual information within a device, including a handheld device such as a smartphone. The resource manager evaluates data-driven policies to determine how to route audio or visual information to or from various input or output components connected to the device, including headphones, built-in speakers, microphones, Bluetooth headsets, cameras, and so on. 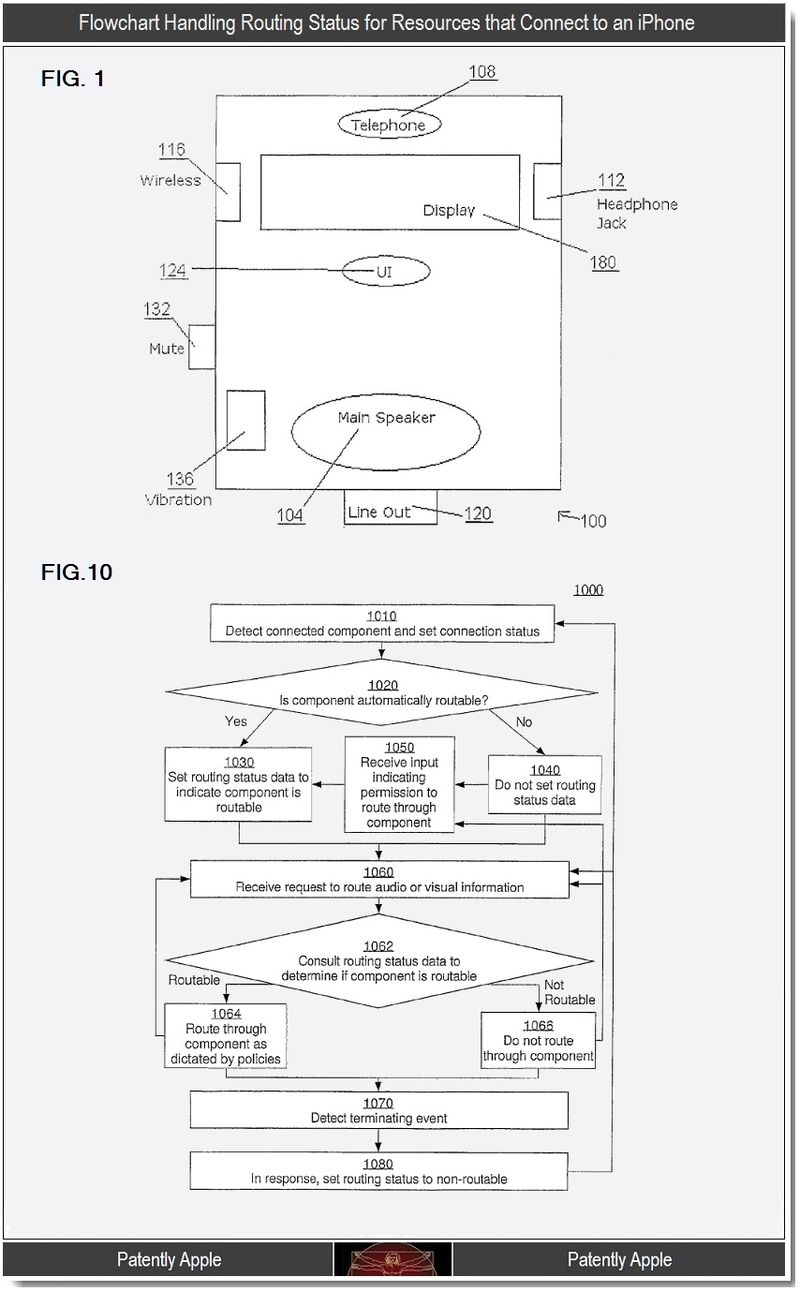 Apple's patent FIG. 1 is that of Apple's smartphone (iPhone); patent FIG. 10 is an example process flow for handling routing status for resources that connect to an electronic device.

To review Apple's other twenty-three patent claims and invention detailing, see granted patent 8,095,694. Apple credits Andrew Rostaing; Andrew, Anthony Guetta and Greg Chapman as the inventors of this patent. The patent states that it was filed in Q2 2011, though it should be noted that Apple presents a "Priority Claim" pointing to an original filing back in 2007 – which was granted in in Q4 2010.

Apple's second granted patent for the iPhone relates to installation and booting software of a device. More particularly, Apple's invention relates to securely installing boot components and booting a device into an operating state authorized according to a received ticket. To understand what that actually covers, we look to Apple's patent background for an overview of what their invention's solution:

As more and more computing devices are being used in people's daily life, security has become a widespread concern for users and content providers. Viruses, worms, Trojan horses, identity theft, software and media content piracy, and extortion using threats of data destruction are rampant. Usually, these attacks involve installing and executing malicious software codes to expose access to device resources that would otherwise be private to the system, the content provider, the user or an application.

To reduce the possibility of system exploits, a secure boot system may be employed to require a signature verification for each production software image. Such a code audit measure, however, may not be completely bullet proof as the number of codes involved is usually very large and continues to increase.

Therefore, current security measures do not deliver a robust solution to protect applications and content inside a computing device, while at the same time providing the flexibility to update the software and or firmware for the device. 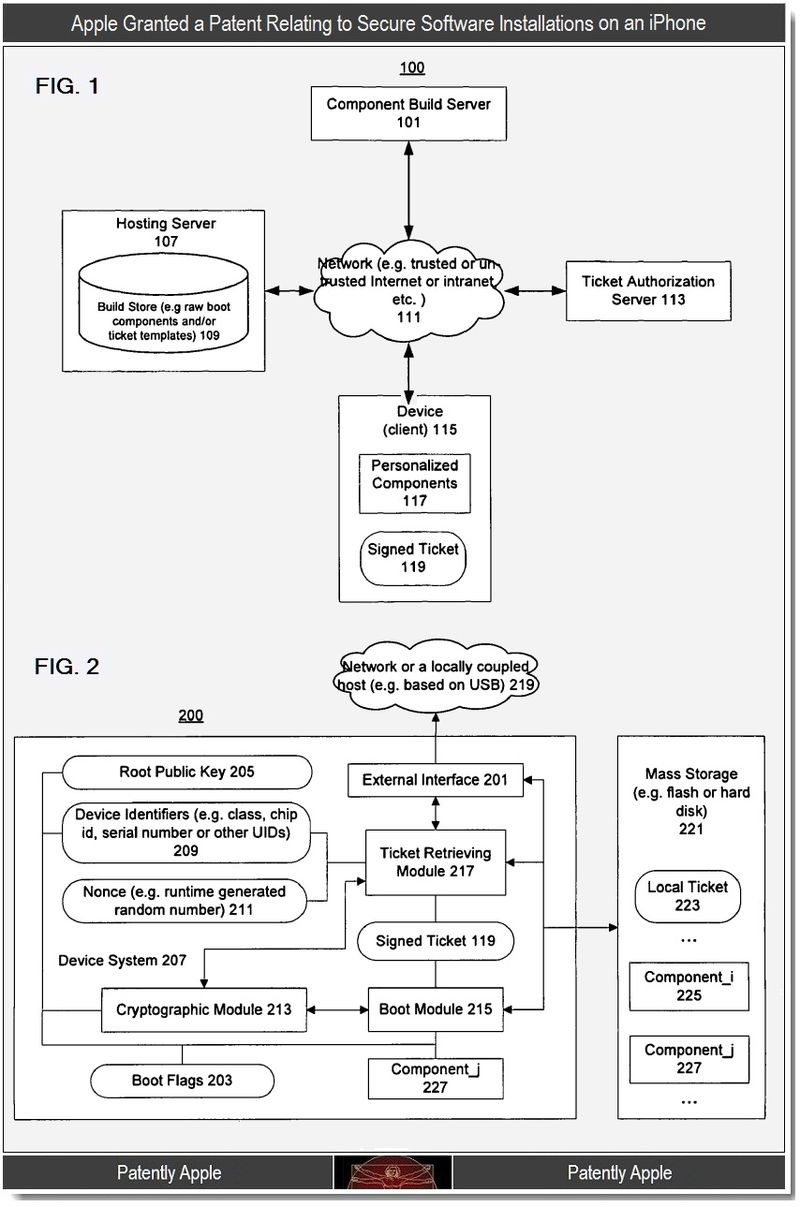 To review Apple's other patent claims and invention detailing, see granted patent 8,095,799. Apple credits Jerry Hauck and Michael Brouwer as the inventors of this patent which was originally filed in Q4 2008.

Examples of media devices with a highly versatile connector system are Apple's iPod and iPhone. These media devices may communicate with their accessories and other peripheral devices through one or more cable apparatus. For example, the media devices could send audio signals to a speaker, and/or send video signals to a computer display or television. In order to transmit various kinds of signals, different types of cables may be used. Different cables may have different performance characteristics and may be designed to operate with different communication protocols. Such information often needs to be efficiently communicated to the media devices. Hence it is highly desirable to improve electronic cabling techniques for media devices.

One example of such an interface protocol is the iPod Accessory Protocol developed by Apple Inc. that could facilitate communication between an iPod or iPhone and accessories via a smart cable apparatus according to the present invention. 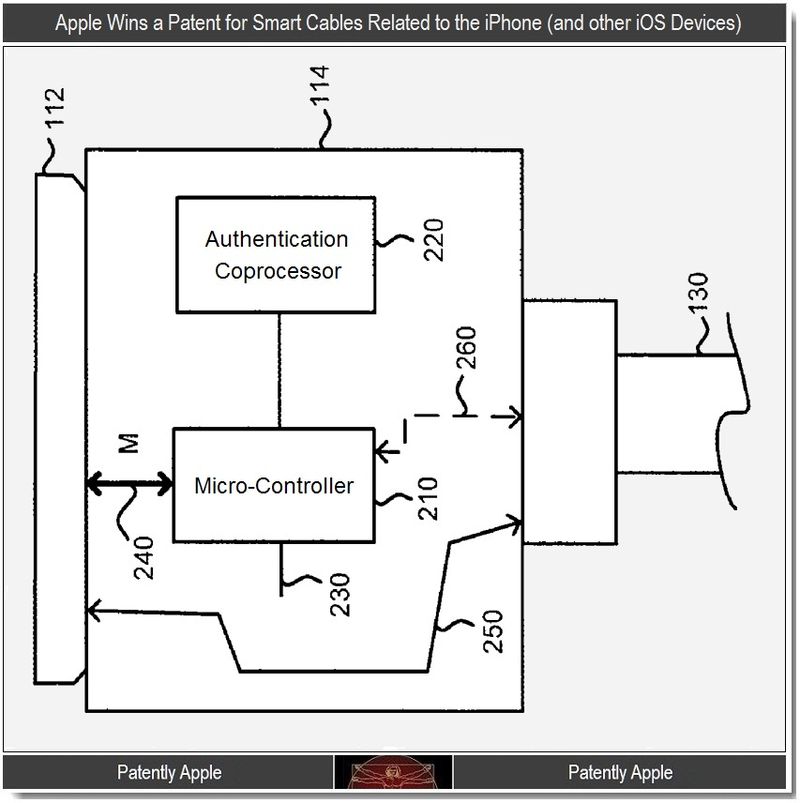 Apple's patent FIG. 2 noted above illustrates a portion of the cable apparatus including incorporated circuitry.

To review Apple's other thirty-five patent claims and invention detailing, see granted patent 8,095,713. Apple credits Jahan Minoo, Scott Krueger, Jesse Dorogusker and Jay Laefer as the inventors of this patent which was originally filed in Q1 2008.

The US Patent and Trademark Office have officially granted Apple 4 design patents today which cover the MacBook Air and its Solid State Drive (SSD), the iPhone's phone icon and the Calorie Workout UI from the Nike + iPod Product. 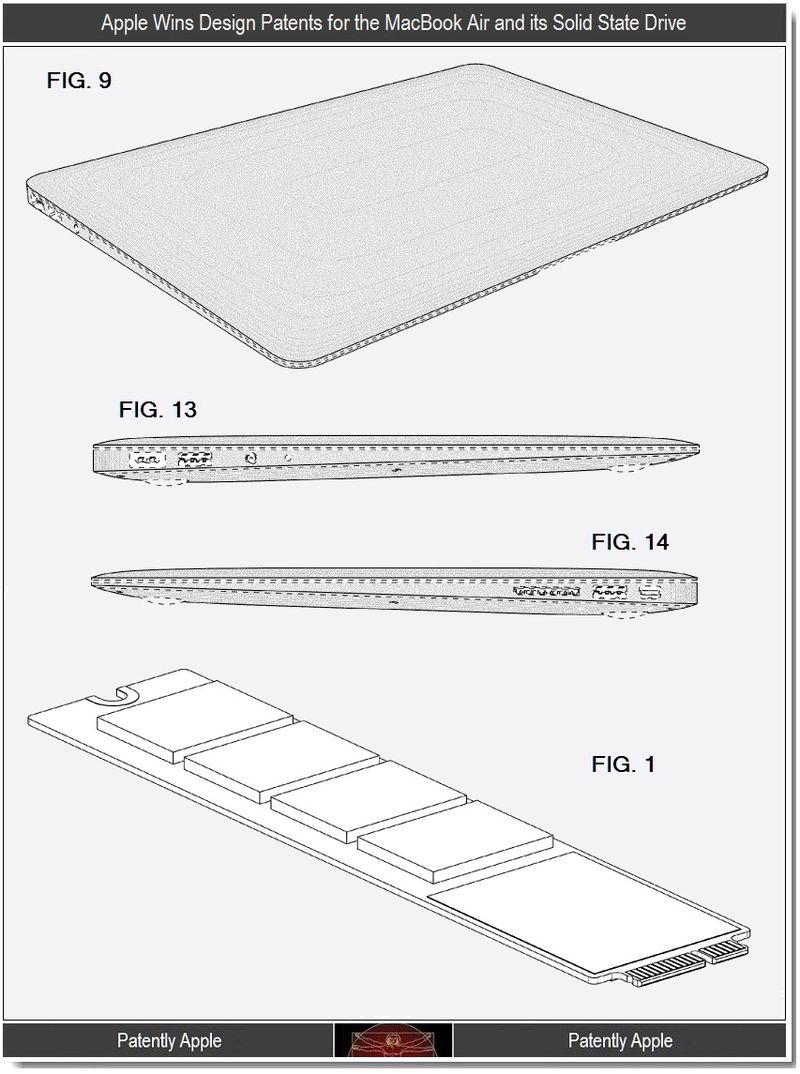 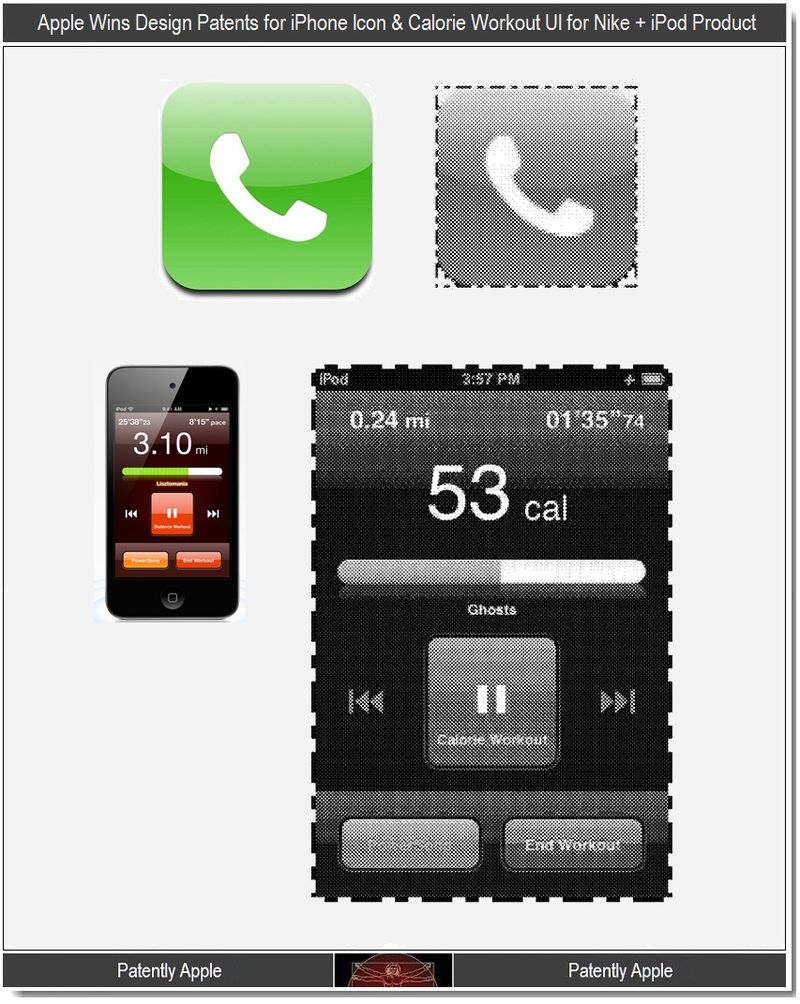