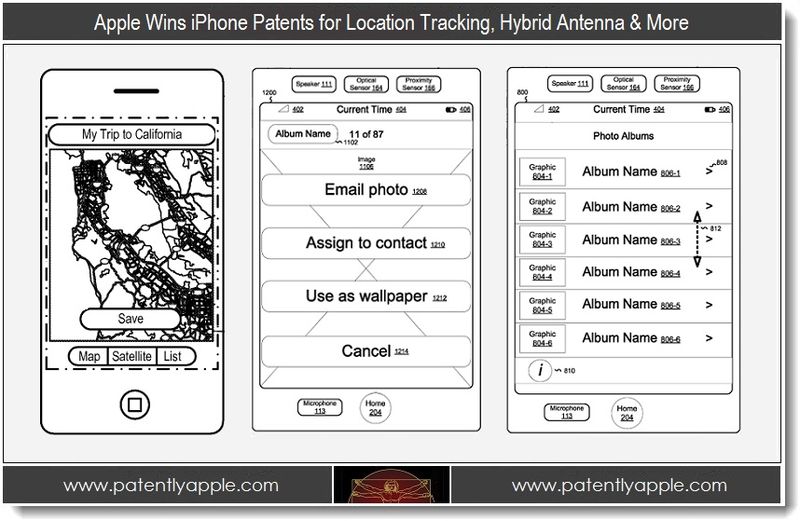 Today, the US Patent and Trademark Office officially published a series of thirteen newly granted patents for Apple Inc. In today's patent report we focus on Apple's original hybrid antenna, their reinvention of photo management for smartphones and their first patent win for location tracking. In May 2010, location tracking became the focus of a senate hearing where both Apple and Google executives faced a grilling from Senator Minnesota Democratic Rep. Al Franken. Apple's Bud Tribble confirmed that Apple doesn't share personally identifiable information with third parties. Even though that was reassuring, the issue isn't going away any time soon. Just last week the Supreme Court basically stated that law enforcement must obtain a search warrant if they're to use GPS and location tracking technologies on suspects. Something tells me that this won't be the last time that the issue of location tracking abuse is brought into question. For now, we simply appreciate the tamer side of Apple's location tracking used for route planning and all things touristy.

Apple has received their first Granted Patent relating to the iPhone's location tracking technology. In order to actually understand what Apple's winning patent is for, we present you with the patent's background and summary as follows:

A number of applications are available for aiding users in navigation and route planning. Some of these applications use mobile devices containing global positioning systems to define the location of the mobile device and plan a route to a desired destination. Currently, however, these route planning systems do not provide a way to document items of interest to a user while a route is traveled. In conventional systems, the information the route planning systems provide is limited to what is pre-programmed. This information can become obsolete in time and may be of little or no interest to the user.

Summary: Location information is used to build a database of locations having associated audio, video, image and/or text data.

In some implementations, a user interface includes a touch-sensitive display area for displaying indications of a predetermined group of geographic locations associated by an attribute, wherein each indication represents geographically coded data associated with a geographic position, and wherein a name of the attribute is displayed in the user interface.

Other implementations are disclosed in Apple's patent, including implementations directed to systems, methods, apparatuses, computer-readable mediums and user interfaces. 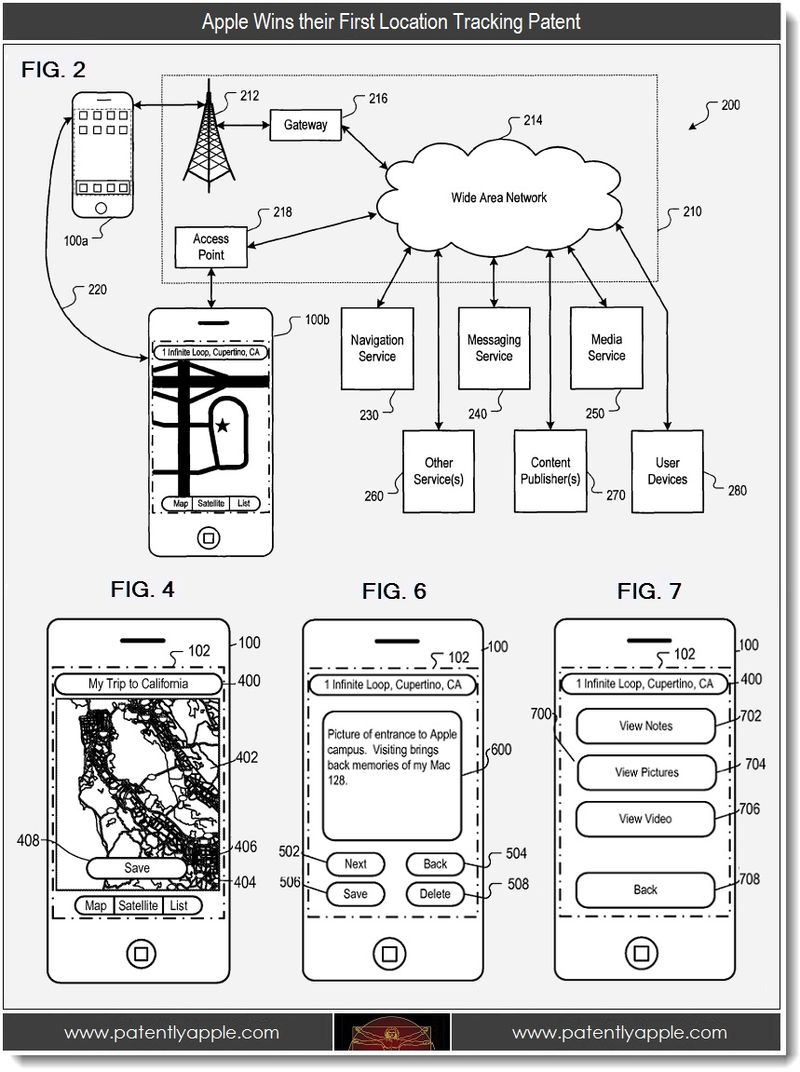 To review Apple's other 41 patent claims, see granted patent 8,108,144. Apple credits Senior VP of iPhone Software Scott Forstall and team engineers Gregory Christie, Robert Borchers, and Imran as the inventors of this patent which was originally filed in Q2 2008.

Apple Wins a Patent for the iPhone's Hybrid Antenna

Apple has received a Granted Patent for the iPhone's hybrid antenna. The date of the patent filing tells us that Apple began work on the iPhone 4's hybrid antenna over two years prior to its debut. This is likely the first of two patents for their hybrid antenna, as this patent doesn't cover the aluminum band design.

The patent does state that the hybrid antenna would support "cellular telephone bands at 850 MHz, 900 MHz, 1800 MHz, and 1900 MHz." This, according to Wikipedia, presents a combination of bands that is considered a "world phone." Apple's granted patent likely laid out the ground work for the upcoming advanced world phone: the iPhone 5. Apple's patent also covers the antenna working with bands supporting GPS and Wi-Fi. 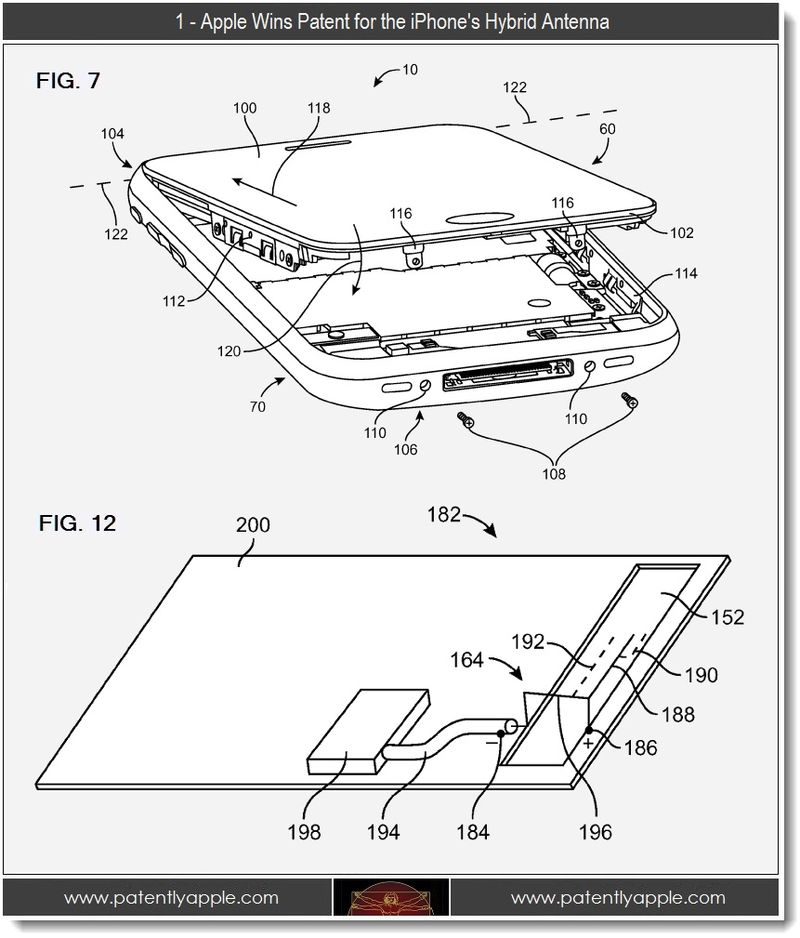 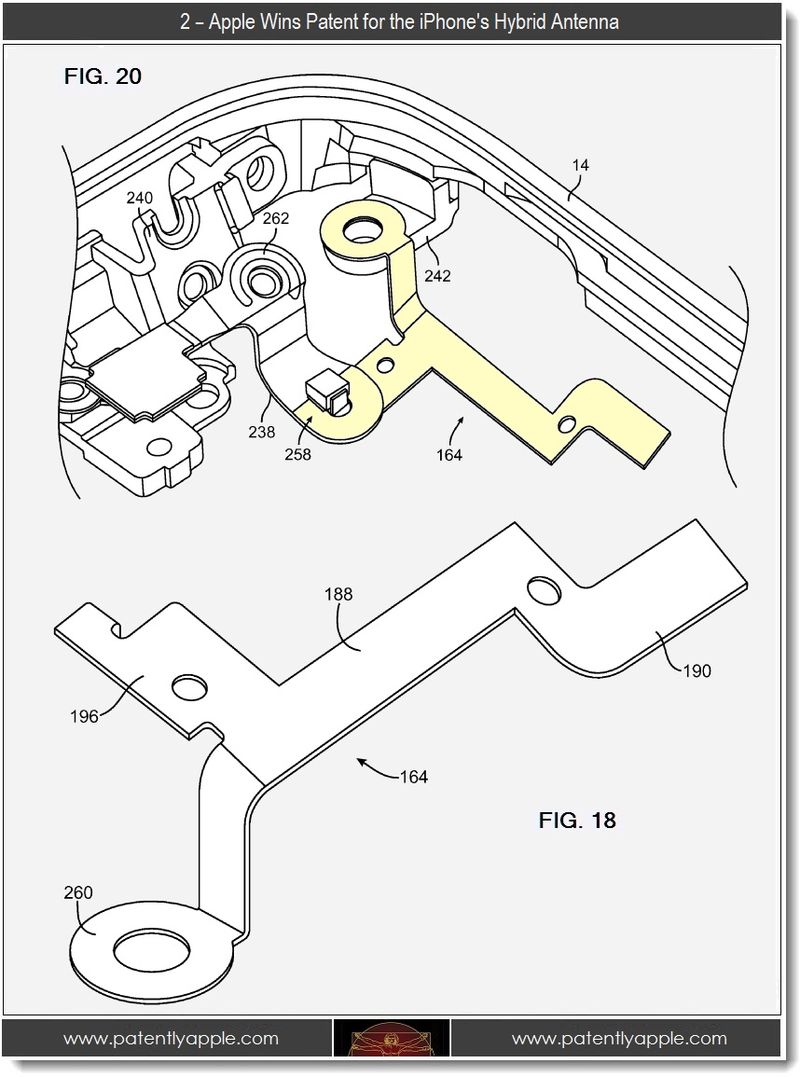 Apple Wins a Patent for Photo Management on an iPhone

Apple has received a Granted Patent that relates primarily to the iPhone's Photo Management. When the late Steve Jobs took to the stage in 2007 to launch the iPhone, he made a series of points that are echoed in today's granted patent as follows:

Some portable devices (e.g., mobile telephones, sometimes called mobile phones, cell phones, cellular telephones, and the like) have resorted to adding more push buttons, increasing the density of push buttons, overloading the functions of push buttons, or using complex menu systems to allow a user to access, store, and manipulate data. These approaches often result in complicated key sequences and menu hierarchies that must be memorized by the user.

Many conventional user interfaces, such as those that include physical push buttons, are also inflexible because a physical push button may prevent a user interface from being configured and/or adapted by either an application running on the portable electronic device or by users. When coupled with the time consuming requirement to memorize multiple key sequences and menu hierarchies, and the difficulty in activating a desired push button, such inflexibility is frustrating to most users.

For example, cell phones with a built-in digital camera have been on the market for some time. But existing cell phones are difficult to use for even basic photo-related operations such as displaying, deleting and sending a photo because of limitations with the cell phones' user interface.

Accordingly, there is a need for portable multifunction devices with more transparent and intuitive user interfaces for photo management.

Today's patent goes into great detail of how Apple's iPhone completely reinvented photo management on a smartphone. Despite Apple's critics with their never ending rumblings about Apple's inventions, Photo Management in 2007 prior to the iPhone was absolutely atrocious. Cheers to the Crazy Ones. 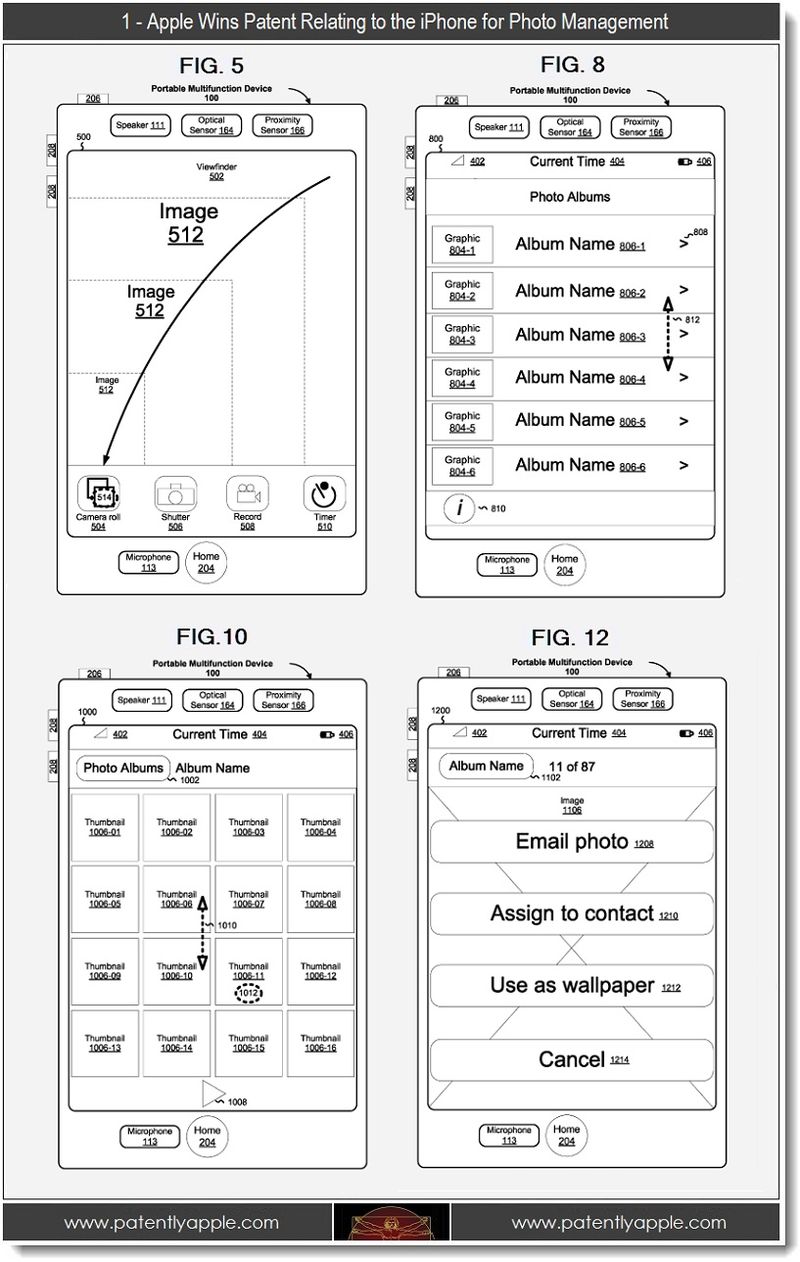 At the time of this filing, the focus of the patent was for the iPhone. In the bigger picture, the patent now applies to the iPad and future iDevices that could access the internet. Apple lists tablet computers, notebooks and desktops with a touch surface. Apple patent specifically states "In some embodiments, a device with a touch screen display (e.g., device 100 [the iPhone], a tablet computer, or a desktop computer with a touch screen display)." That's interesting to note the specificity of a touch screen desktop, being that they later supported that notion with a full patent filing of its own that could be reviewed here. 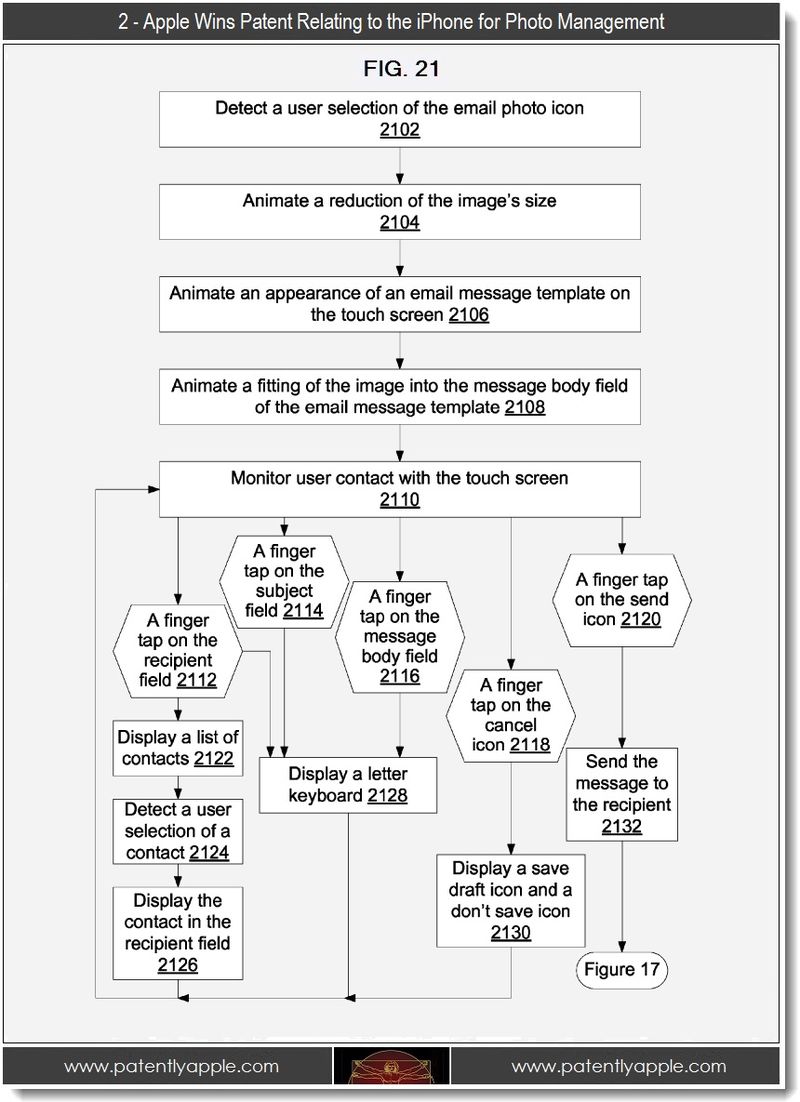 To review Apple's other 26 patent claims, see granted patent 8,106,856. Apple credits Senior VP of iPhone Software Scott Forstall and team members Michael Matas, Greg Christie, Paul Marcos, Marcel Van OS and Imran Chaudhri as the inventors of this patent which was originally filed in Q3 2007 or about a month after the original iPhone debuted. 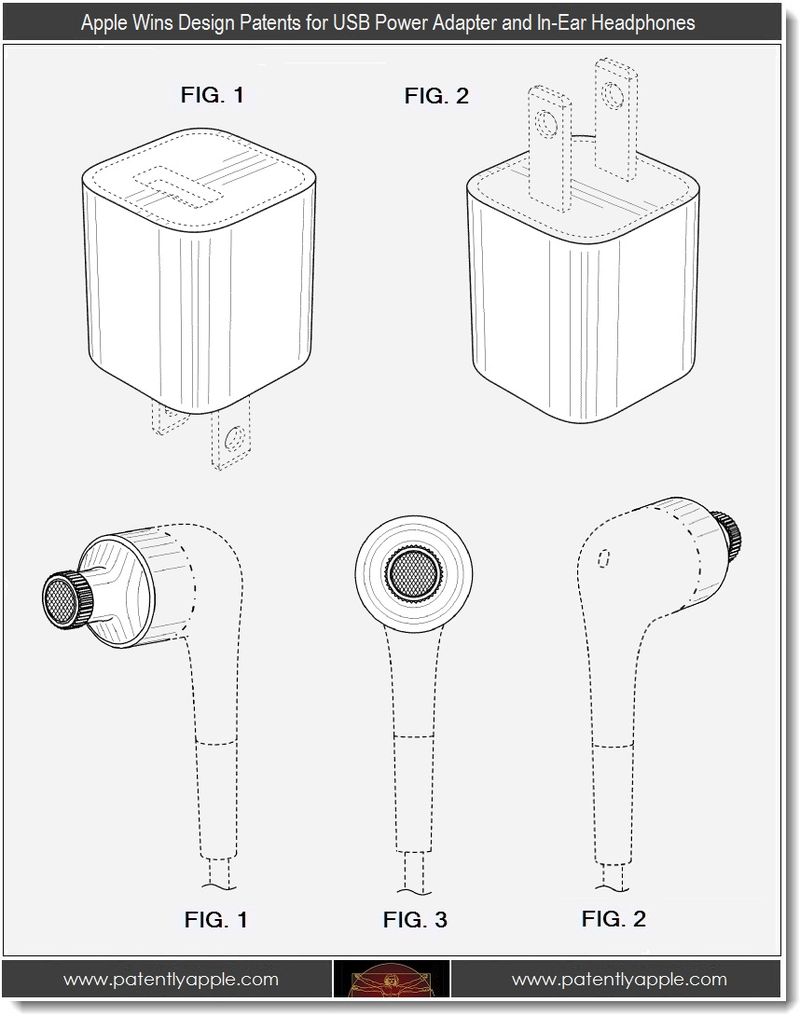 8,108,685 Apparatus and method for indicating password quality and variety

8,108,342 Methods and systems of content mobilization, mobile search, and video editing through a web interface

8,106,926 Controlling a display device to display portions of an entire image in a display area (iPod related).

8,106,630 Method and system for operating a portable electronic device in a power-limited manner (iOS Devices). 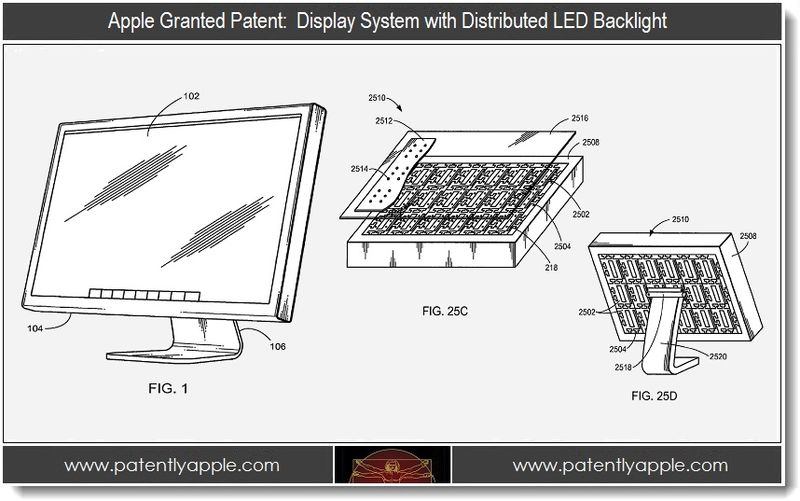 Isn't that the power adapter that Samsung has copied from Apple...
One of many web sites who noted the blatant hardware copying...
www.iphoneroot.com/samsung-copies-apple-power-adapter/print/