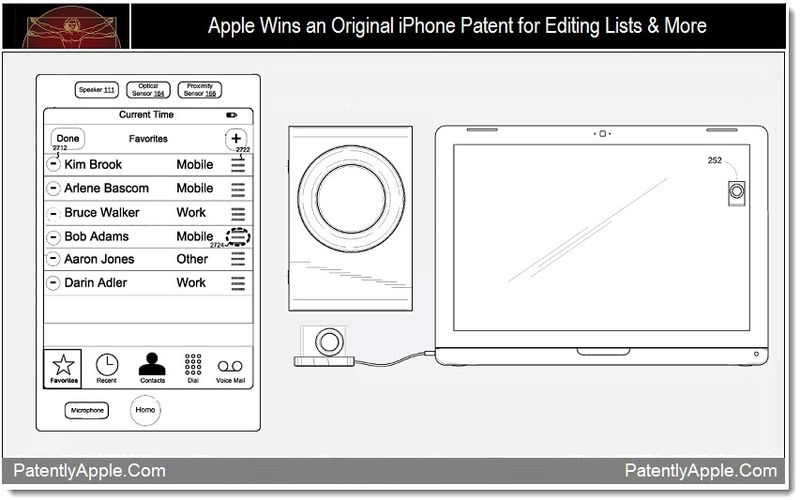 The US Patent and Trademark Office officially published a series of thirteen newly granted patents for Apple Inc. today. In our last granted patent report of the day we primarily focus on one of Apple's original iPhone patents that relate to editing file or file folder lists easily. Other granted patents issued today cover the technology behind Apple's second generation iPod Shuffle and how the iPhone was redesigned after 2007 so that it could double as an external hard drive.

In order to understand the poor state of smartphone interfaces prior to the arrival of the iPhone in 2007, Apple reminds us of a few points in their patent background that the Androiders of this this world should remember:

As portable electronic devices become more compact, and the number of functions performed by a given device increases, it has become a significant challenge to design a user interface that allows users to easily interact with a multifunction device. This challenge is particularly significant for handheld portable devices, which have much smaller screens than desktop or laptop computers. This situation is unfortunate because the user interface is the gateway through which users receive not only content but also responses to user actions or behaviors, including user attempts to access a device's features, tools, and functions.

Some portable communication devices (e.g., mobile telephones, sometimes called mobile phones, cell phones, cellular telephones, and the like) have resorted to adding more pushbuttons, increasing the density of push buttons, overloading the functions of pushbuttons, or using complex menu systems to allow a user to access, store and manipulate data. These conventional user interfaces often result in complicated key sequences and menu hierarchies that must be memorized by the user.

Accordingly, there is a need for portable multifunction devices with more transparent and intuitive user interfaces for digital (finger) selection and manipulation of selected items on a touch screen display that are easy to use, configure, and/or adapt.

Apple's patent FIG. 5F illustrates an exemplary user interface for displaying and managing favorite contacts (on an iPhone). The figure on the right is a screenshot of an editing screen found a current iPod touch for the sake of helping current users identify with this patent feature. 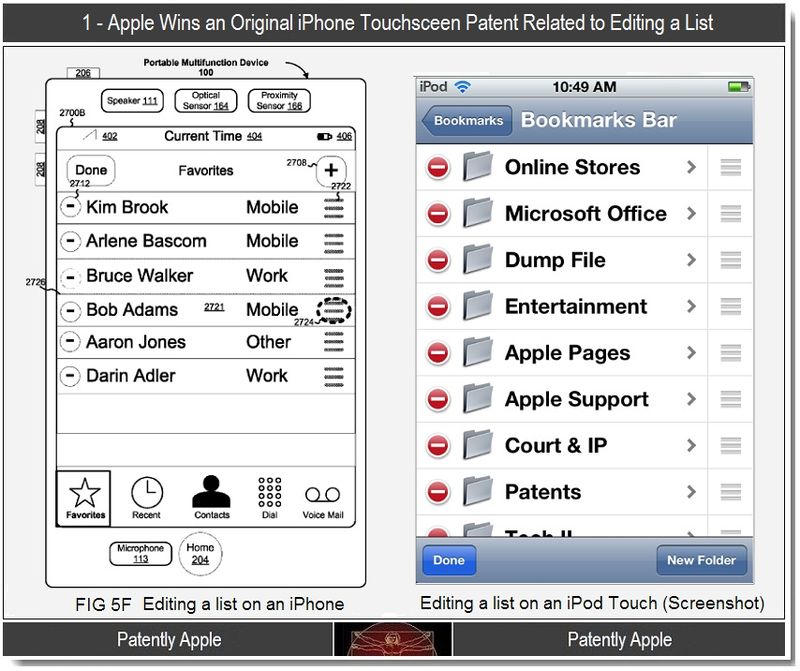 Apple's patent FIG. 6A illustrates a flow diagram of processes for displaying and managing lists (on an iPhone). 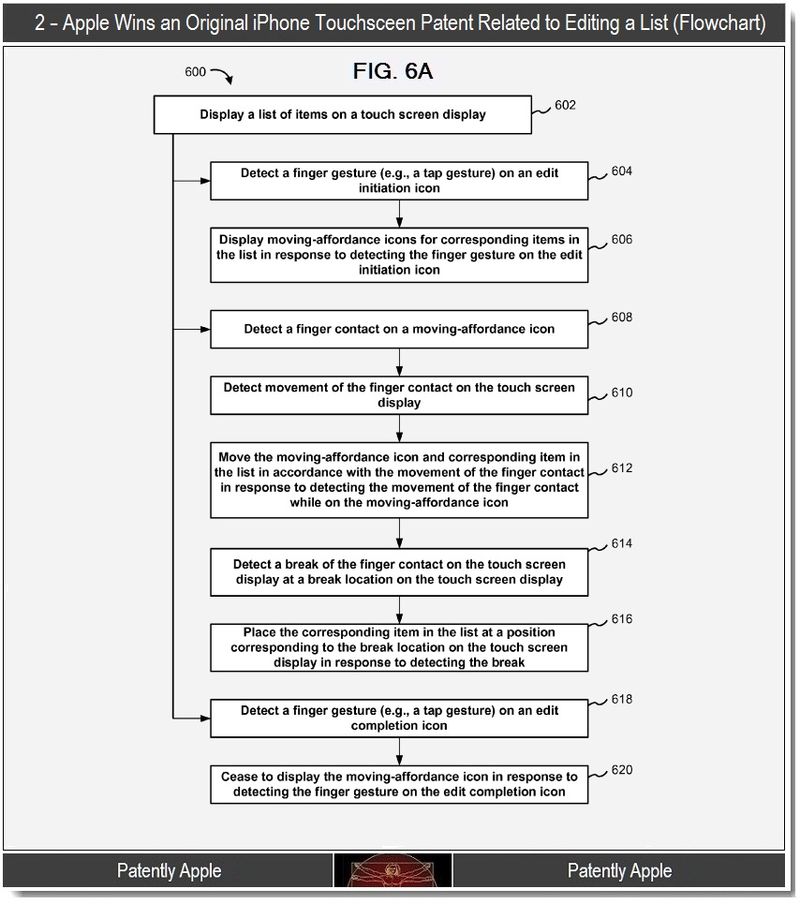 Apple Wins a Patent for their iPod Shuffle

Apple has been granted a patent for their second generation iPod shuffle which extends right through to covering accessories such as the iPod shuffle dock and lanyard. 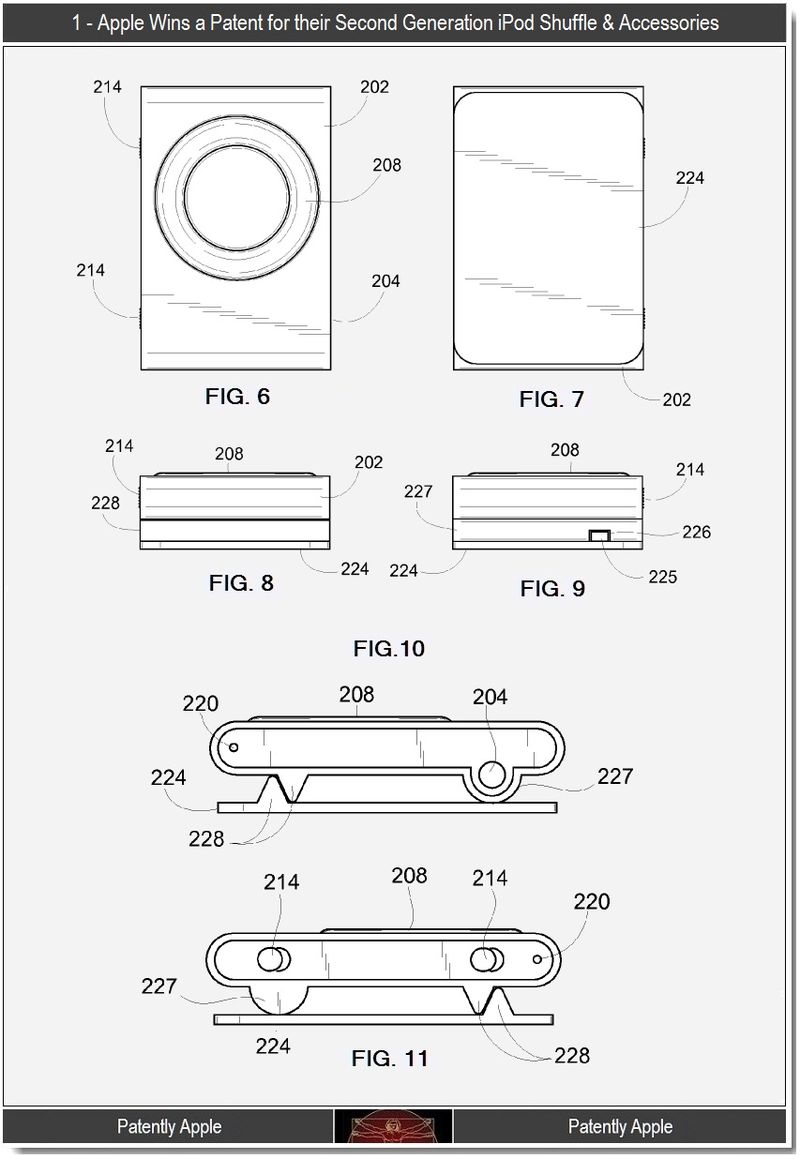 Apple's patent FIG. 16B shown below illustrates the iPod Shuffle plugged into a docking station, which is connected to a laptop computer. 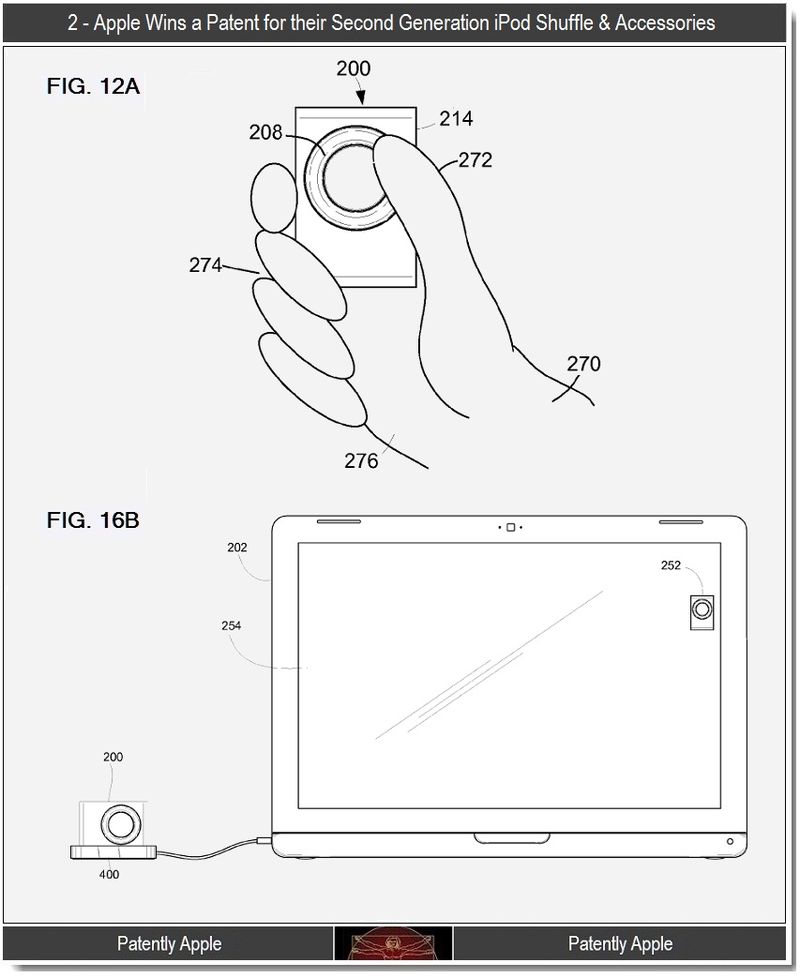 The first noteworthy patent is that of granted patent 8,090,767 which generally relates to computing systems and more specifically to a pairing and storage access scheme between a handheld device and a computing system.

Basically, the iPod has been able to double as a portable hard drive almost from the very beginning, whereas the iPhone wasn't. This particular patent covers how this hard drive storage feature and capability was eventually brought over to the iPhone and more.

The second noteworthy granted patent is that of patent 8,090,132 which covers Apple's now defunct Bluetooth headset.  Their first granted patent on this short lived product was published back in May 2011 and an earlier 2009 report showed us that Apple actually considered repurposing this headset at some time in the future. But at this point, we may never see it return. Time will tell.