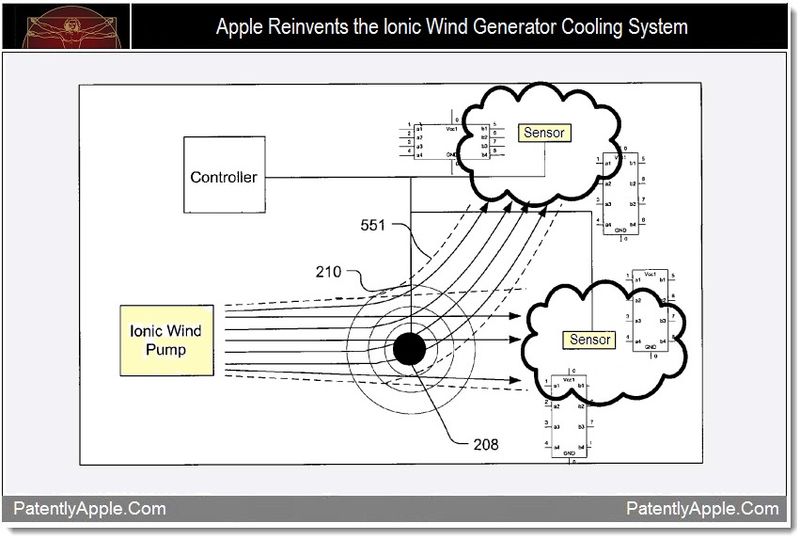 Yesterday, the US Patent & Trademark Office published a patent application from Apple that revealed their intent to reinvent a cooling system that is known in the industry as an ionic wind generator. This type of cooling system doesn't use a fan or heat sink. The problem with the current design however, is that it's only able to cool limited areas within a computer or device. Apple's reinvention of the ionic wind generator will allow the system to use specialty sensors and mechanisms to redirect cool air to various areas within a computer or device, as needed. This means that it could simultaneously cool down the CPU, GPU and other components such as batteries (in the case of iOS devices and the MacBook), transformers, storage devices, and other components. Yet if the GPU or any other component isn't being used, the system won't waste energy trying to cool down what's not necessary. Just think of it as a "smart" cooling system. Apple's killer attention to detail is legendary. Philosophically speaking, it's what separates the wheat from the chaff.

A cooling device that has been proposed for use in such systems is an ionic wind generator, which generates airflow based on the ionization of air molecules. A limitation of currently-proposed ionic wind generator cooling systems for such devices (and for other conventional cooling devices as well) is that the generated airflow, from a first electrode toward a second electrode is limited to a linear path which is essentially static, and thus could only cool a specific region of an electronic system; particularly, only the regions that are in, or immediately adjacent, the path of the airflow could be cooled.

While the size, placement, and relative orientation of the two electrodes could be established to provide a linear path of a desired direction and dimension so as to provide a selected degree of airflow-based cooling in that region; such systems inherently involve compromises in terms of either performance or cooling capability.

For example, because of the fixed path, the ionic wind generator cooling systems must be designed to provide airflow of a sufficient dimension, and in a sufficient amount, to meet all foreseeable cooling needs. However, as could be seen from the example of a computer system (such as, for example, a laptop computer), there may be substantial differences in the usage of the processors and other heat sources in the computer at different times, and thus a cooling system designed to meet the highest-level cooling needs may be using more power than would be necessary at times of relatively lower level cooling needs.

Additionally, some components within the example laptop computer may not always be in substantial use, such as a graphics processor, that exacerbates heat generation. Thus, airflow directed to such a component when it is not heavily used, and is thus generating little heat, again is requiring a greater energy budget that would be otherwise required.

Thus, the limitations of such currently proposed ionic wind generator cooling systems for many electronic devices are limited relative to the variable cooling needs of many such systems.

Apple's patent pending invention and solution identifies various embodiments of methods and apparatus for deflecting or redirecting a flow of ionized air, such as that generated by an ionic wind generator.

In some cases, this selective control will be in response to one or more monitored parameters. As just one example of such selective control, a parameter of a processing device (as defined later herein) may be monitored and the deflection field generator may be activated in reference to some threshold associated with the parameter.

For example, in monitoring a temperature of a particular component in the processing device, the temperature may be detected to meet or exceed a certain threshold temperature. As a result, the deflection field generator is activated to deflect or redirect at least a portion of the flow of ionized air to provide additional cooling proximate the particular component. 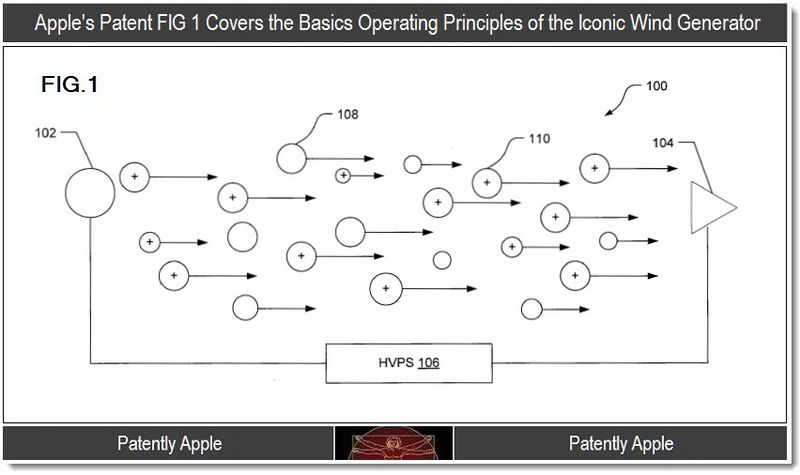 The high voltage power supply is configured to apply a voltage between the corona electrode and the collector electrode to create a high electric field gradient at the corona electrode. This high electric field gradient causes particles in the air (e.g., oxygen and nitrogen molecules) to become ionized (to become charged), and therefore creates a corona or halo of charged particles 110.

An electric field propels the charged particles which transfer momentum to neutral air particles 108 by way of collisions, resulting in bulk air movement towards the collector electrode. It should be appreciated that the ionic wind generator has little or no moving parts, thereby possibly resulting in improved reliability and reduced noise level when compared to conventional cooling devices with moving parts, such as fans.

Of course in order for this to work with Apple's varying devices from iMac to MacBook Pro to iPhone or other iOS device, Apple has worked out varying formats that could best utilize their new cooling invention. Unfortunately Apple doesn't clarify which design is for which category of product. Two out of the three are very similar and so we'll focus on two of the designs; one for GPU intensive devices (like the iMac and MacBook Pro) and the other for iOS devices that are a little less graphics intensive. 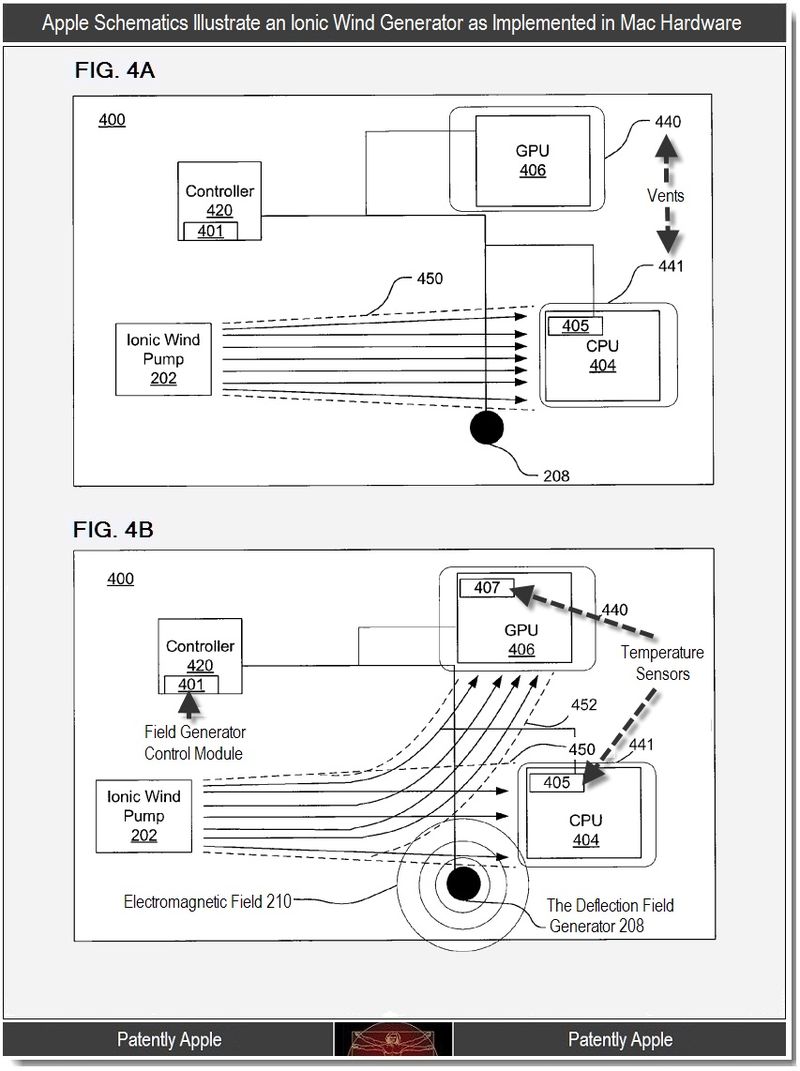 In a larger device such as an iMac or even a MacBook Pro, Apple states that the ionized air flow could be directed to cover other components such as heat sinks, power sources (batteries), transformers, storage devices, and other components.

Apple's patent FIGS. 5A and 5B depict schematic diagrams illustrating an ionic wind generator implemented in a different kind of Apple Device. 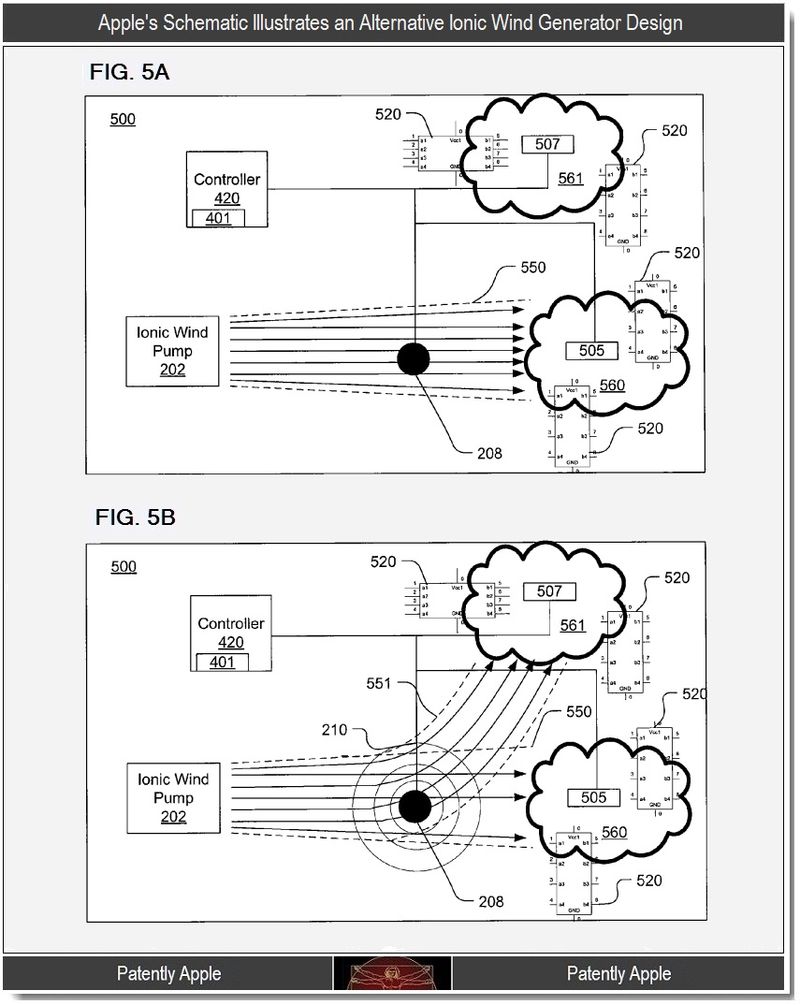 One: Apple's patent application 20120002097 titled "Dual-Purpose Hardware Aperture was published yesterday at the USPTO. We originally covered this in July 2009 and you could check out the details there.

One of the more interesting points of this patent is that Apple clearly illustrates a stand-alone camera with the lens on the side of the unit. As we pointed out in our Top Ten Patents of 2011 report yesterday, Apple's camera patent filings represented the strongest technology trend in 2011. So who knows, maybe Apple sees a possible future market for a stand-alone camera with advanced features that we can't fathom at the moment. Time will tell on that one.

Two: Apple's patent application 20120004883 covers much of the same technology that we covered in our March 2009 report titled "Apple is issued an Extreme Sporting Patent Revealing New Devices!"

The interesting point to this patent application update is that the original 21 claims were cancelled and replaced with 19 new patent claims. Why is that interesting? It's interesting because Apple and Nike are being sued over this patent. The case was filed in December 2011. Whether this will help Apple's case is yet to be determined.

Three: And lastly, Apple filed a patent under application 20120002110 titled Dynamic Backlight Adaption for Black Bar with Subtitles. The devices that the LED backlighting will affect are listed in the patent as a "personal computer, a laptop computer, a cellular telephone, a personal digital assistant, an MP3 player, and/or another device that includes a backlit display."

There's absolutely no mention of the dynamic backlight system relating to television in the patent as some have claimed – but you could check it out for yourself over here (the link is a temporary one that's only good for about 24-48 hours).

With that said, it wouldn't hurt to have a sharper backlight when watching video content on a Mac. I love the clarity of my iMac's display for surfing and work. But when it comes to watching the odd video of a TV show online, it definitely lacks detail-rich sharpness that I think this patent will resolve. Working backwards from the patent, it could mean that it spills over to a future Apple HDTV. It's a bit of a stretch, but technically it could be applicable. Time will tell.

More importantly, perhaps, is that this particular patent application has quite the history. In fact there are another twelve related patents listed in Apple's documentation that would strongly suggest that they may have actually acquired a family of related patents recently from the original inventors. The twelve noted patents are listed as follows: