Apple May work with HTC to Fight off New Kodak Lawsuit 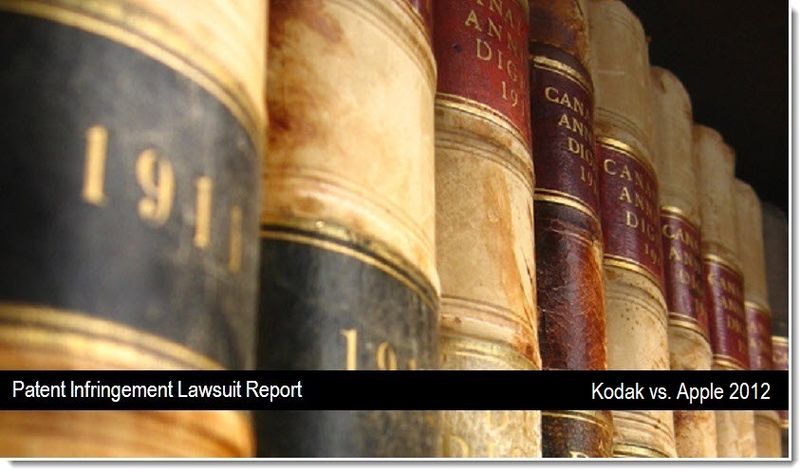 In February 2010 Eastman Kodak Company sued Apple claiming that they were infringing their patents related to digital cameras and certain computer processes. In April of 2010 Apple counter sued by claiming that Kodak had infringed on two of their patents but the US International Trade Commission in July 2011 ruled that Kodak didn't infringe on Apple's patents. So where are we now? Well, Kodak is coming at Apple like a freight train with a new patent infringement case that claims that Apple is infringing on four new patents. Yet an industry analyst believes that Apple may very well end up working with HTC to fight Kodak's claims. Now that would be an interesting possibility to say the least. And lastly, on another legal front, Apple is being sued by Hong Kong's Ho Keung Tse.

The first Claim of relief comes by way of Kodak's patent 7,210,161 issued on April 24, 2007, entitled "Automatically Transmitting Images from an Electronic Camera to a Service Provider Using a Network Configuration File."

According to Kodak, "Apple has infringed and continues to infringe, literally and under the doctrine of equivalents, the '161 patent, by using, selling and/or offering to sell, within the United States, and/or by importing into the United States, electronic devices for capturing and transmitting images such as mobile camera phones, tablets, and other handheld communications devices, including, but not limited to, the iPad 2, iPhone 3G, iPhone 3GS, iPhone 4, iPhone 4S, and the iPod touch (4th generation) (the "Accused Devices"), which embody and/or practice at least claims 5 and 7 of the '161 patent." 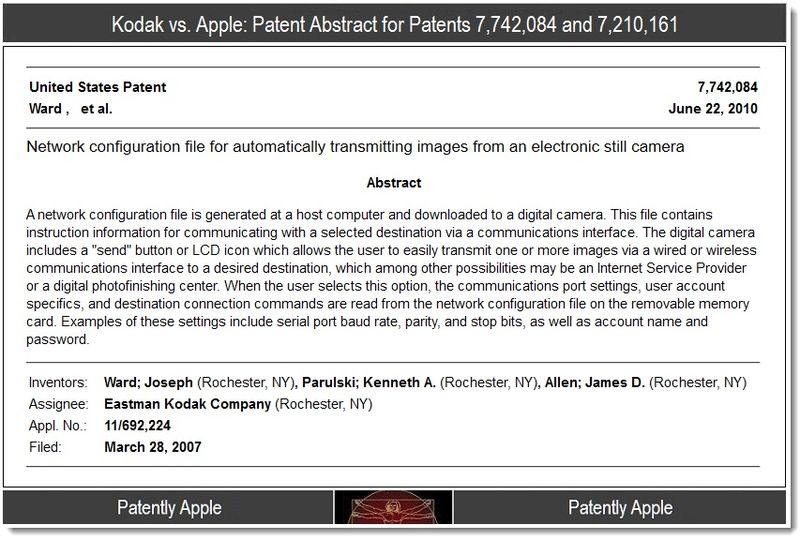 Kodak's patent 7,742,084 issued on June 22, 2010 is entitled "Network Configuration File for Automatically Transmitting Images from an Electronic Still Camera." According to Kodak, Apple's products, as first listed in the first claim above, embody and /or practice at least claims 5 and 7 of the '084 patent. 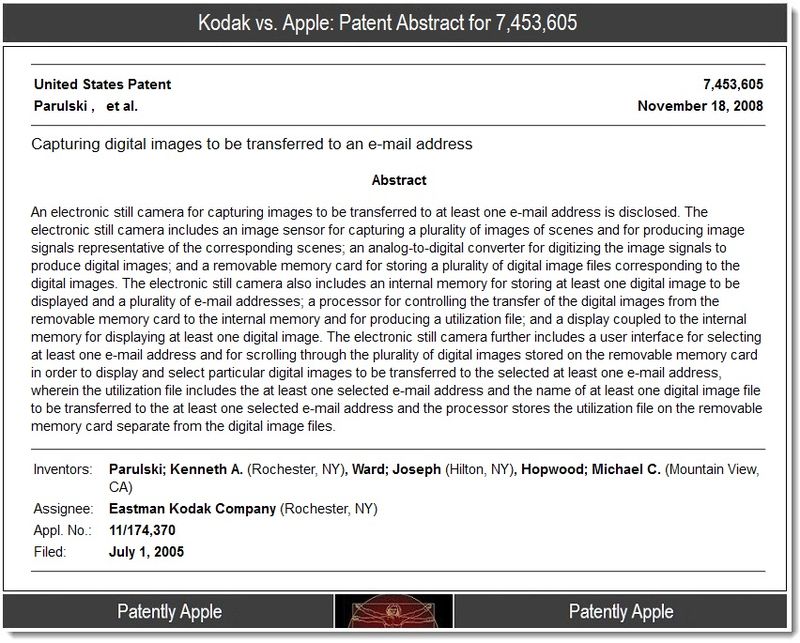 Kodak's patent 7,936,391 issued on May 3, 2011 is entitled "Digital Camera with Communications Interface for Selectively Transmitting Images over a Cellular Phone Network and a Wireless LAN Network to a Destination." According to Kodak, Apple's products noted above embody and/or practice at least claims 11, 12, 15, 17 and 18 of the '391 patent. 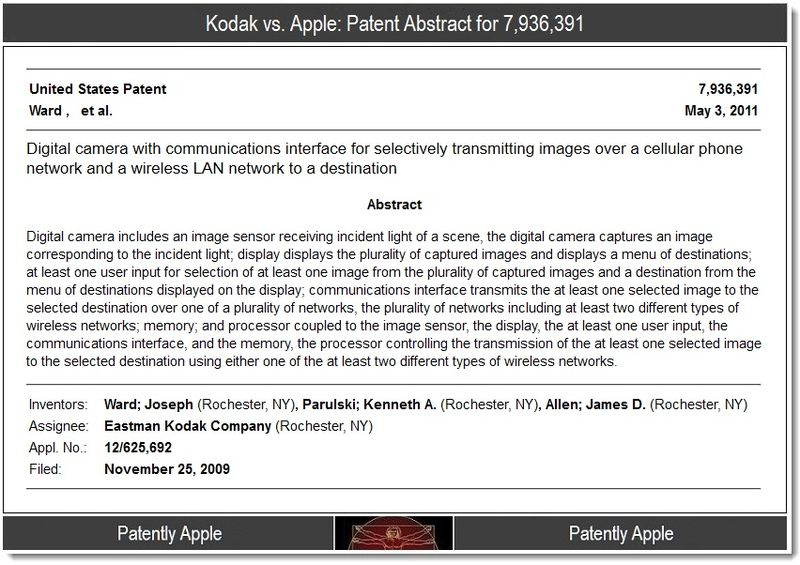 My friend Florian Mueller, an award-winning intellectual property activist-turned-analyst, has injected an interesting view on this. He thinks that "While Apple and HTC are suing each other, they will probably cooperate with respect to the patents Kodak is asserting against both of them. At the very least they will probably conduct a joint prior art search, and they could also be interested in narrowing the scope of the asserted patents claims so as to avoid liability for infringement." As time goes on, this will certainly be an interesting development to watch for.

It was also reported on by Focus Taiwan, who is interested in the connection to Taiwan's HTC, that Laura G. Quatela, president and chief operating officer of Kodak, stated that Kodak had numerous discussions with HTC and Apple in an attempt to resolve the issue but failed to reach a satisfactory agreement.

"Our primary interest is not to disrupt the availability of any product but to obtain fair compensation for the unauthorized use of our technology," Quatela said in the statement. "There's a basic issue of fairness that needs to be addressed."

Kodak's History is a Powerful Argument to a Jury

In Kodak's formal complaint filed with the court, they are found presenting a powerful overview of themselves in relation to photography that's worth noting:

"Founded in 1880, Kodak has a long history of innovation in photography and image processing. Among many other significant inventions, Kodak and its founder. George Eastman, invented photographic plates in 1879, the hand-held camera in 1888, and roll-up film in 1883. Kodak engineers also designed and built the camera that Neil Armstrong used on the first walk on the moon.

Kodak’s innovations have continued in the age of digital photography. In 1977, Kodak designed and built the first operating digital camera. Kodak’s significant investment in research and development has resulted in a continuing stream of improvements to digital imaging technology—improvements that have led to a long line of consumer accepted digital imaging products and more than 1,000 Kodak patents in the field of digital imaging, including the Asserted Patents. Kodak Fellow Kenneth Parulski, a co-inventor of the ’161, ’084, ’605, and ’391 patents, has more than 190 patents to his name and is widely recognized as a pioneer in numerous digital camera technologies.

This kind of presentation could help the jury acknowledge Kodak's important role in the history of photography and more specifically, digital photography. Just because Kodak's marketing didn't connect with the youth of the internet age doesn't mean that their patents weren't infringed upon by some of our favorite tech companies. But time will tell if a jury will agree with their legal arguments, history or not.

The case was filed late yesterday afternoon in the United States New York Western District Court, Rochester Office. The presiding Judge in case 6:2012cv06020 is noted as being Judge David G. Larimer. It should be noted that Kodak's Formal Complaint that we based our report on doesn't mention HTC whatsoever. The Kodak case against HTC was filed on January 10, 2011 under case number 6:2012cv06021.

On a second front, Apple is being sued by Hong Kong's Ho Keung Tse. This company began their legal case against Apple in 2005, again in 2009 and this time they think they have the right case. In their first count, they believe that Apple's App Store and products (iPod touch, iPhone and iPad) are infringing upon their patent 6,665,797. In their second count, they believe claims 13, 16 and 21 of the same patent, in respect to DRM software and methods, are being infringed upon by Apple. 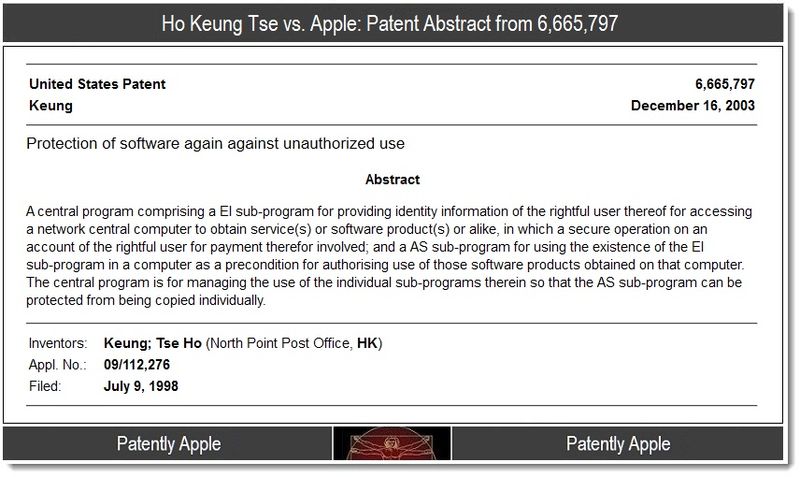 To review the official complaint in full, visit Prior Smart.

Wow. I still remember the times when Kodak and Apple worked together, Apple released their QuickTake 100, and Kodak their respective model. There was digital cameras before that, but it was Kodak and Apple which begun starting that market. Though Apple quickly walked away from it, after the QuickTake 200.

Even do remember that Apple had an QuickTime API/OS just for cameras to use, but never got enough info on that in detail.

And know kodak sue them they did work with?

IMHO (In My Humble Opnion): This is nothing more than Kodak looking to show the value of its patents as it moves to selling or liquidation/breakup of he company. It's basically telling Apple, HTC, and others, hey, you want to use these patents as a club? Come buy out portfolio. Nothing more.