The US Patent and Trademark Office officially published a series of fifteen newly granted patents for Apple Inc. today. In our third and final patent report of the day, we cover a number of new powerful iPhone related patents that Apple's legal team will no doubt be able to add to their growing arsenal. The first patent covers the iPhone being able to order and pay for items such as fast food over a wireless network. The second and third patents cover the very complex subject of signal processing algorithms for wireless MIMO communication systems. And lastly, we look at Apple's reinvention of the circuit board that discusses multi-part substrate assemblies that allow Apple to design ever thinner iOS devices.

Apple Wins a Patent for a Wireless Communication System

Apple has received a Granted Patent that goes back prior to the iPhone's arrival. Even in its infancy, Anthony Fadell was already devising ways for the iPhone to be easily used to connect to local restaurants or establishments to conduct simple transactions. Today's granted patent is about improved approaches to processing a remote order.

As you could see above, it's common to find food and beverage "apps" at Apple's App Store these days that could assist consumers in ordering their favorite fast foods from their iPhone.

To review Apple's seventeen patent claims and invention detailing, see granted patent 8,072,956. Apple credits Anthony Fadell as the sole inventor of this patent which was last filed in 2010 but dates back to July 2006 or a year ahead of the iPhone's official release.

Apple has received a Granted Patent that relates to the field of information processing. In one aspect, the present invention relates to a system and method for signal processing and control signaling for wireless MIMO communication systems.

Starting from the bottom of Apple's patent background, we're somewhat able to grasp the fundamentals of what their invention sets out to remedy: "There is a need for an improved system and methodology for signal processing and control signaling in a MIMO-SDMA system. There is also a need for a multi-user MIMO system which accurately estimates channel quality indicator information at a particular receiver without requiring knowledge of the other receivers or the base station scheduling algorithm.

In addition, there is a need for a family of signal processing algorithms for selecting "transmit and receive" array vectors for MIMO-SDMA which overcomes quantization-related preceding errors and other problems in the art. 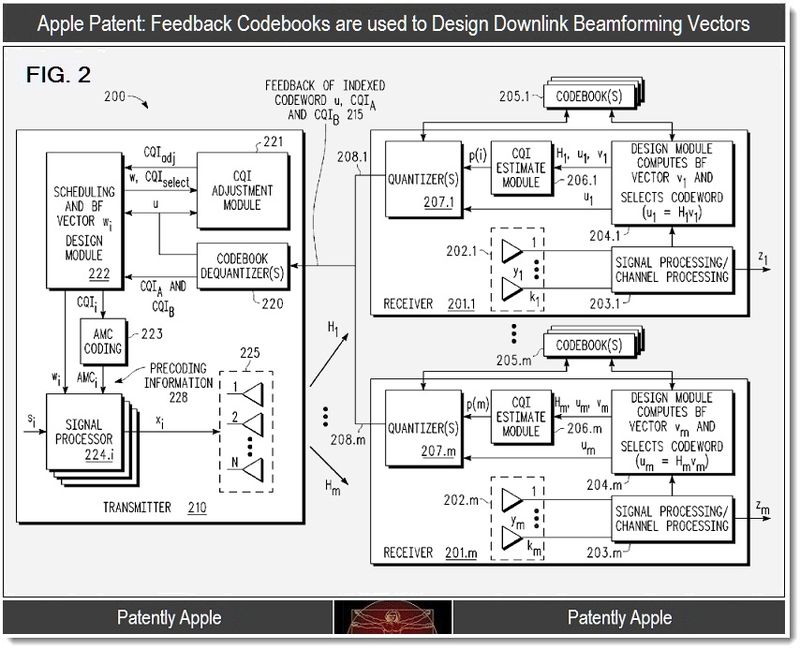 Apple's patent FIG. 2 noted above depicts a wireless communication system in which limited feedback codebooks are used to design downlink beamforming vectors for each receiver station.

Further into the patent, Apple further describes their invention this way: "A finite rate feedback system and methodology are described for use in efficiently providing precoder feedback in wireless, multi-user, multi-input, multiple output (MIMO) SDMA systems. Using codebook-based preceding techniques, multi-user beamforming transmission is enabled by accurately estimating and adjusting one or more CQI values for each receiver based upon the optimized receive beamforming vector designed at each receiver." Unless this is your field of expertise, you'll have a difficult time reviewing the specifics of this patent.

To review Apple's twenty-three patent claims and invention detailing, see granted patent 8,073,069. Apple credits Jayakrishnan Mundarath and Jayesh Kotecha as the inventors of this patent which was originally filed in January 2007, prior to the official iPhone launch. Apple's second granted patent on this subject matter could be found under patent number 8,073,486 titled "Methods for opportunistic multi-user beamforming in collaborative MIMO-SDMA."

And lastly, Apple has received a Granted Patent that relates to multi-part substrate arrangements that yield low profile configurations; in other words thin designs. This is very interesting considering that Matt Macari of the Verge revealed late last week that Apple gave Samsung some work-around iPhone and iPad design hints with one of them being "profiles that aren't thin." I guess the lawyer who provided Samsung with these suggestions knew that today's patent was in the pipeline. So the suggestion may have carried a little more weight than first thought. 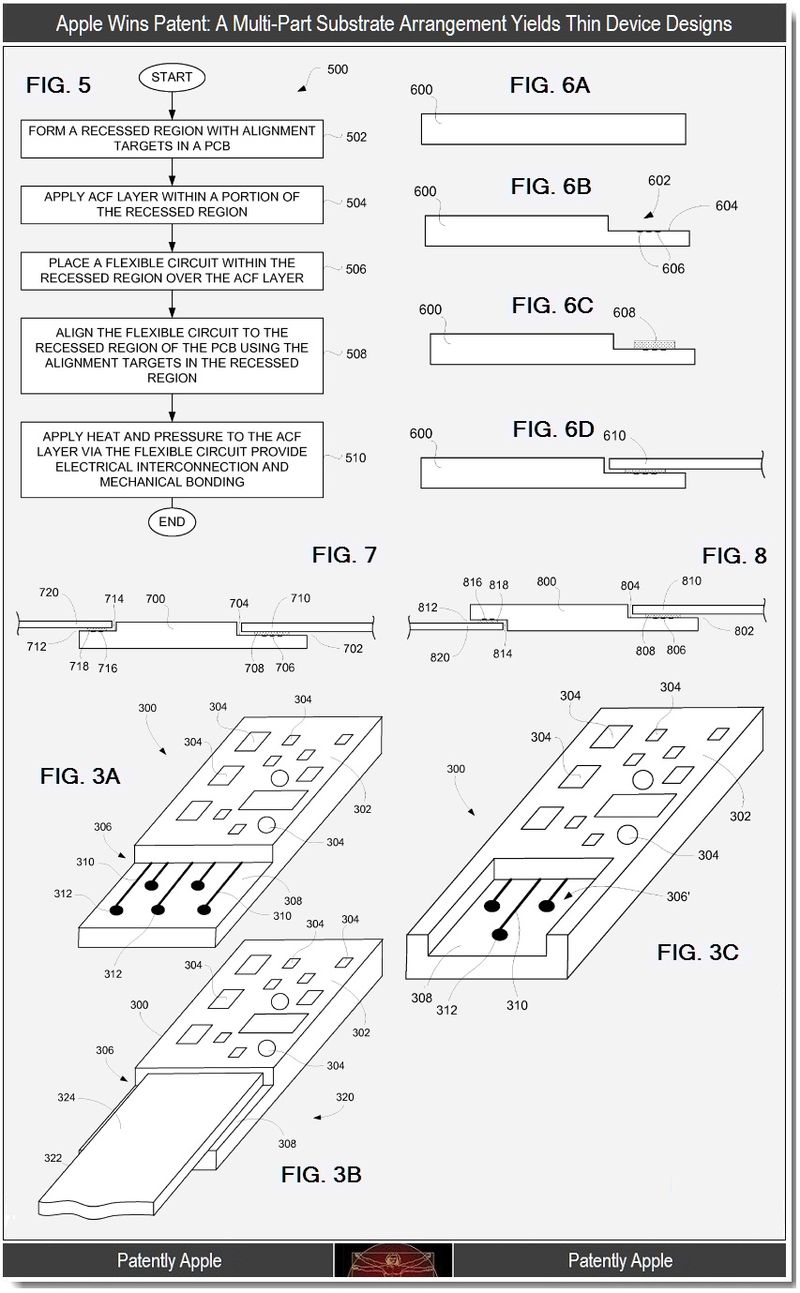 To review Apple's other thirty two patent claims and invention detailing, see granted patent 8,072,764. Apple credits Kyle Yeates, James Bilanski and Dennis Pyper as the inventors of this patent which was originally filed in Q1 2009.

Other Patents Listed Today Worth Noting

8,073,980 - Methods and systems for automatic configuration of peripherals

8,071,893 - Methods and apparatus for shielding circuitry from interference

A Couple of Sidebar Notes

Recent tidbits of interest on the IP front include Florian Mueller's recent article that discusses the low strategic value of Apple's design patents. While I'm not an advocate of those screaming that the patent system is completely broken, I most certainly concur that when it comes to the design patent system, there's apparently little to no value to the patentee.

On many occasions I've pointed out my frustration of trying to accurately report on some of Apple's design patents. Sometimes I've been left to guess, which is utterly insane. And when design patents are allowed to be entered with a limiting descriptor such as "electronic device," alone, then what exactly is the patentee trying to nail down legally? Long story short, there's a problem with the design patent process and it was evident in Apple's case last week. The question becomes, does the fault rest with the structure of the design patent  process for demanding too little information, or the patentee for not ensuring that their products are clearly described? To be fair, how is a judge to rule on visuals alone? Well, that's my rant for the day.

On a friendlier note, an Italian designer covering one of our recent reports discussed one of the designs that he posted back in 2006 that reflected what a dreamy rotary iPhone nano could have looked like. If Apple would have had this design in 2008 as an entry level iPhone, I think it could have been a smash hit. Then again, design wise, it's very cool and my hat goes off to Davide Casali, but on the practical side of the equation, it may have been lacking. But that's in 20/20 hindsight and I guess we'll never really know. 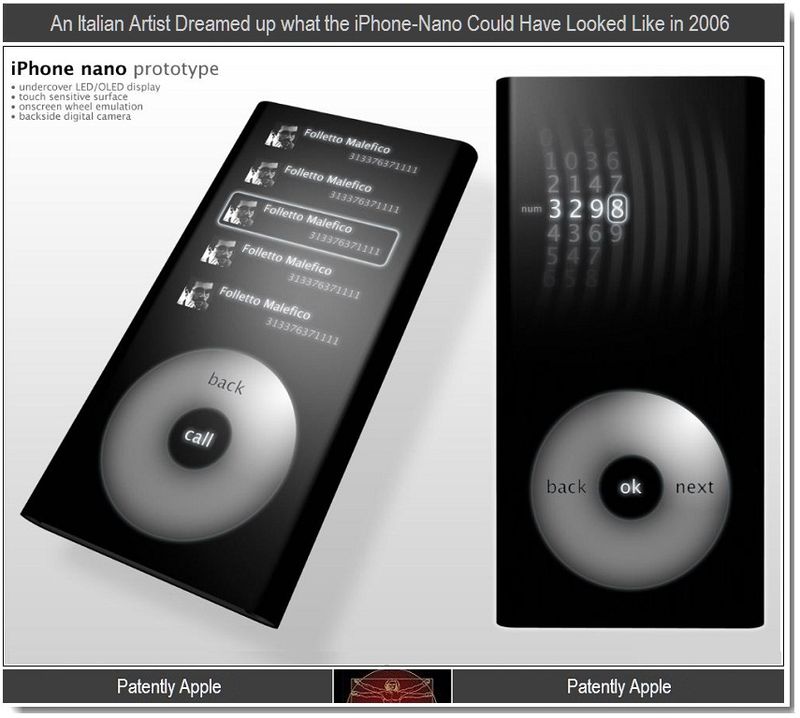