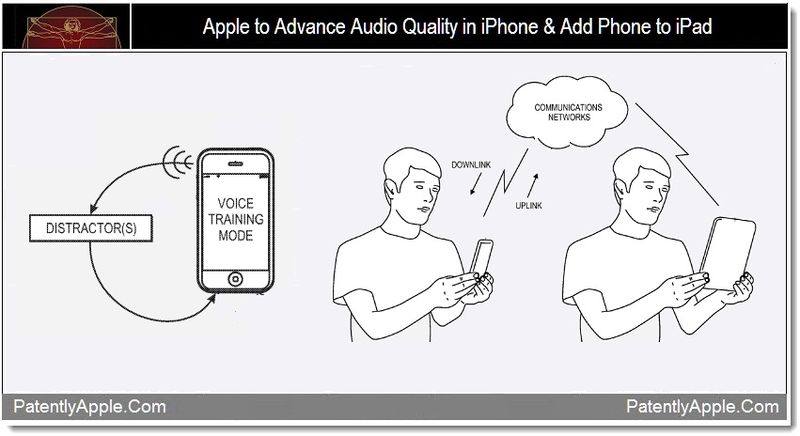 On December 8, 2011, the US Patent & Trademark Office published well over 40 patent applications from Apple in a single day. In our first report of the day, we focus on several patents that cover the advancement of audio quality in future iPhones. Specifically, the main patent covers an advanced noise suppression system that will be welcomed. Many times I've spoken to people calling me on their iPhone and sometimes I've been able to hear the person next to them speaking as clearly as I could hear them. That's not exactly the way it's supposed to work. Apple's newly proposed audio advancement system is likely to put that issue to rest while advancing iPhone audio quality overall. The last tidbit of information derived from this group of patents was rather a bit of a surprise. Apple revealed the use of a speakerphone feature on a future iPad - and that could be a new killer app in the making. While we could hope for this to roll out next year, we must always remember that technology revealed in a patent application could take more time to work through the system than we'd like. On the other hand, let's hope that Apple doesn't tease us with this for too long!

The Problem with Current Noise Suppression Schemes for Mobile Phones 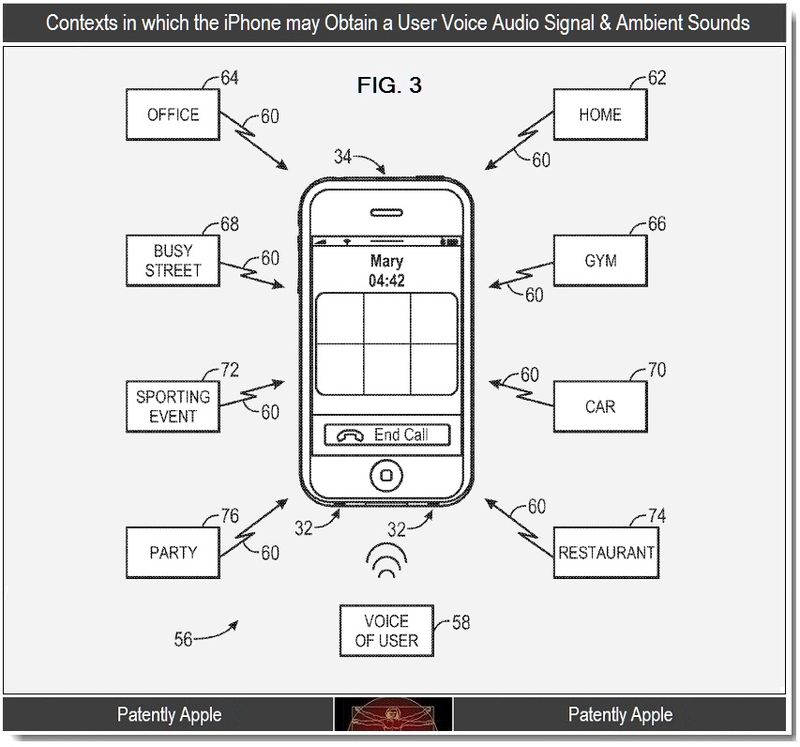 Apple's patent FIG. 3 illustrates many such contexts in which the iPhone may obtain a user voice audio signal (58) and ambient sounds (60) while performing a voice-related feature. 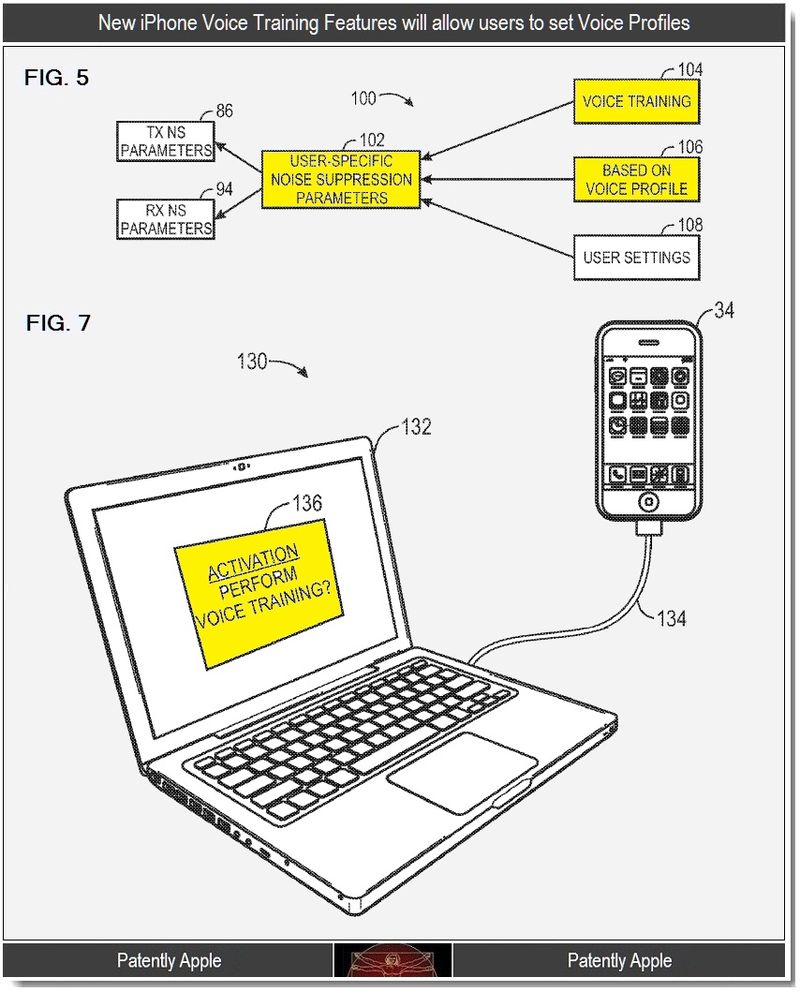 While a user may be able to further tweak the future iPhone's noise suppression levels for varying situations over time, Apple appears to have set up a unique noise suppression system using a dual-device recording system as noted in patent FIG. 10 as an initial set-up system. During the operation of the system (180), the MacBook or other Mac may prompt the user to say a word or phrase while one or more of a variety of distractors play in the background (182). Such distractors may include sounds of crumpled paper babbling people, white noise, rock music, and/or road noise. The user will then set up the noise suppression levels of their choosing. 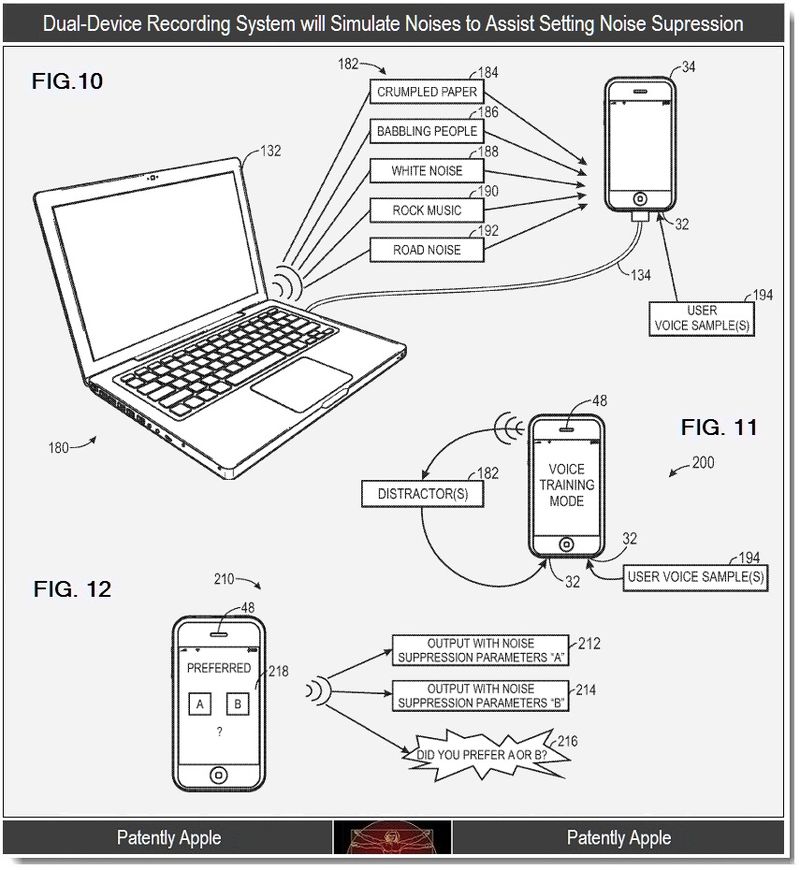 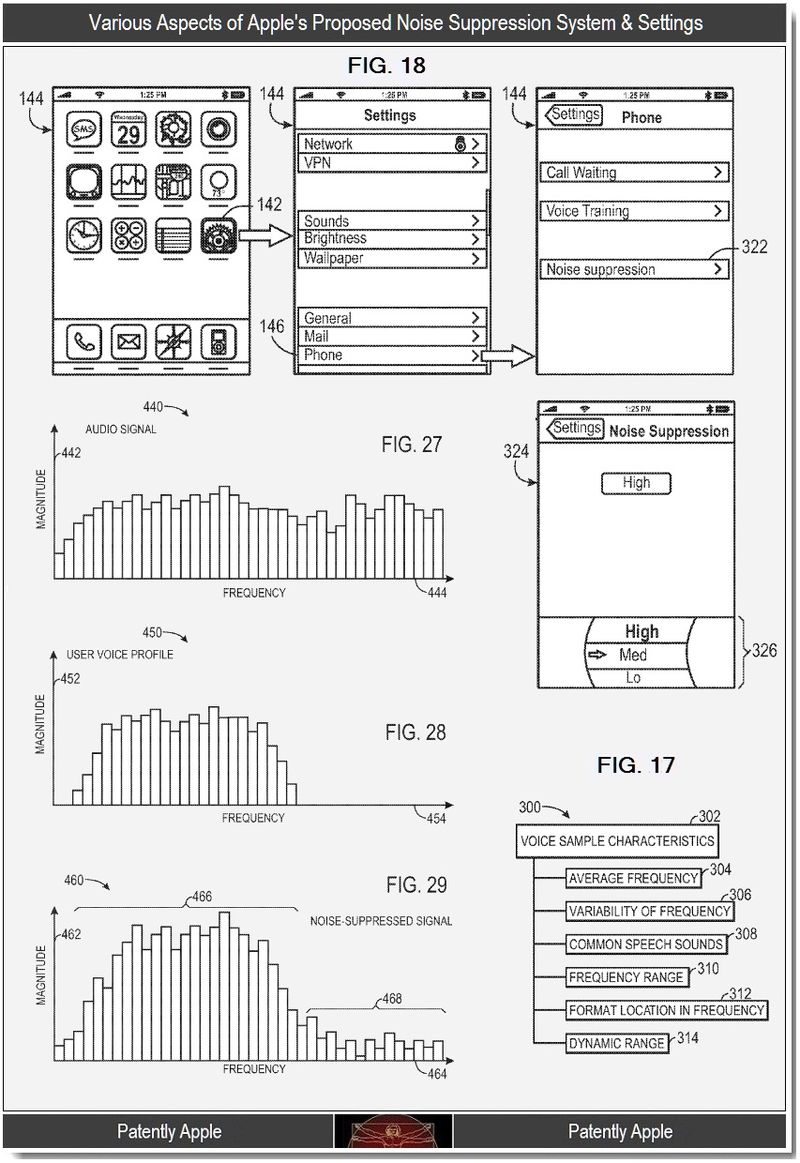 There were two additional patents published today relating to noise suppression and sound quality on future iPhones. Apple's second patent deals specifically with active noise cancellation (ANC) circuitry that is coupled to the input of an earpiece speaker of an iPhone to control the ambient acoustic noise outside of the device and that may be heard by a user of the device. A microphone is to pickup sound emitted from the earpiece speaker, as well as the ambient acoustic noise. Control circuitry deactivates the ANC in response to determining that an estimate of how much sound emitted from the earpiece speaker has been corrupted by noise indicates insufficient corruption by noise. 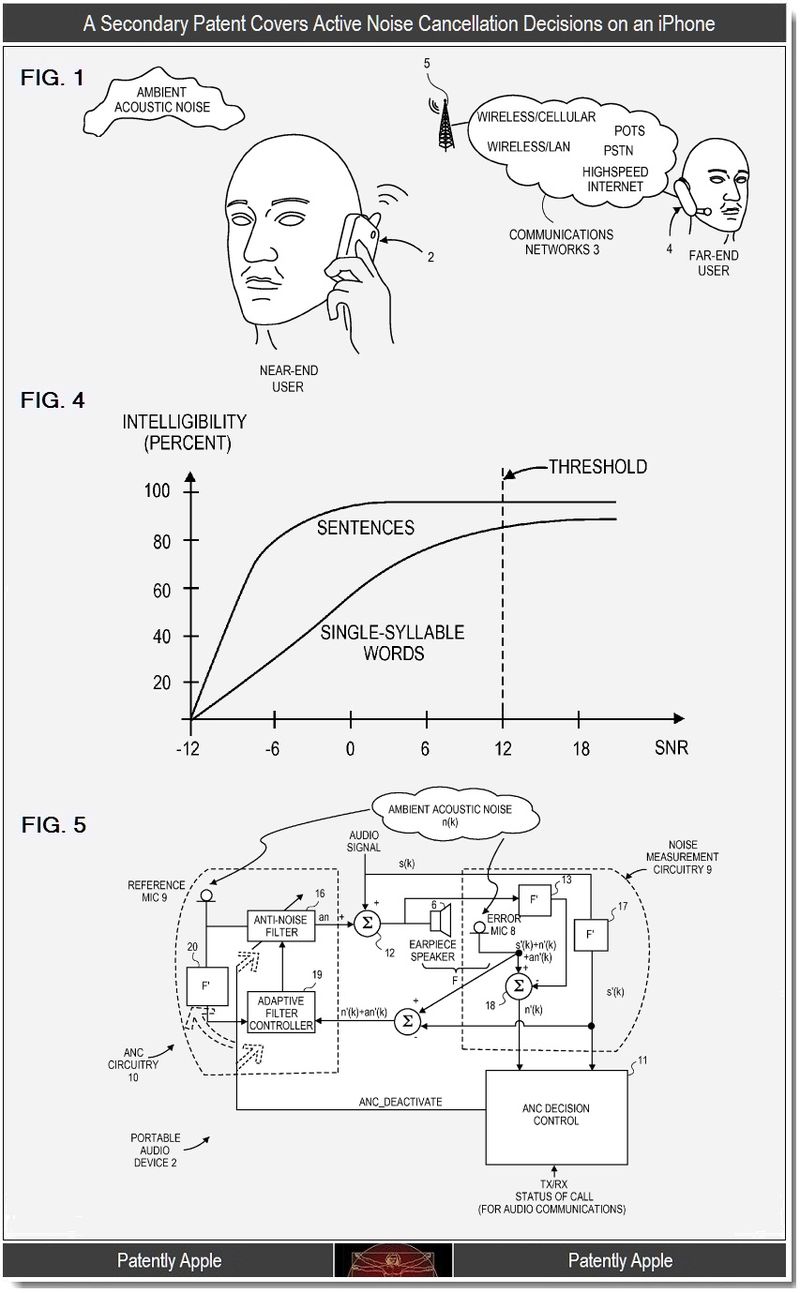 Apple's patent FIG. 1 depicts a mobile communications device in use by a user in a hostile acoustic environment; FIG. 4 is a plot of intelligibility versus SNR for sentences and single-syllable words; FIG. 5 is a block diagram of feed forward ANC and ANC decision control based on signal and noise estimates.

Apple's third patent on this subject matter covers their invention that generally relates to methods and systems for removing time division multiple access (TDMA) noise from an audio signal.

The last patent covers Apple's invention relating to echo cancellation techniques within a communications device such as a smart phone and a cellular phone, for reducing the presence of an undesired reverberated audio signal in an uplink signal path of the device. 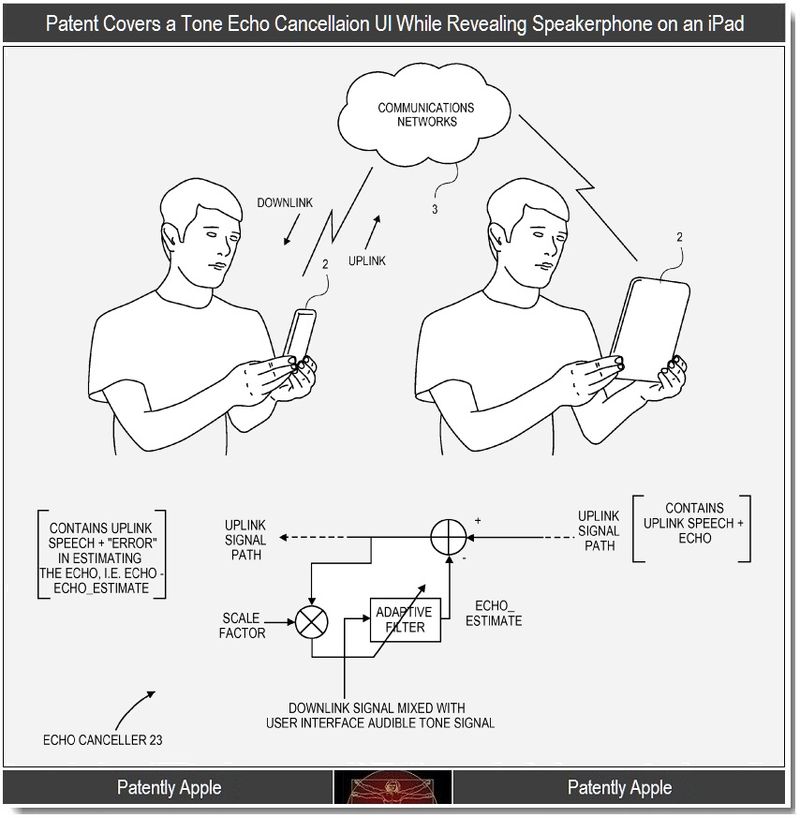 But there's a surprise to this patent: In patent FIG. 1we clearly see two users, one with an iPhone and the other with an iPad. What's new here is that Apple states that "a far-end user (depicted in this case as using a tablet-like computer is also in speakerphone mode)." Yes, a speakerphone on the iPad.

Apple credits Stephen Schell for this invention which was originally filed in Q2 2010.

On another front today, Apple has filed a divisional application relating to their original 3D UI patent that we covered in our September report titled "Whoa - Apple Wins a 3D Display & Imaging System Patent Stunner." While I couldn't find anything new in the patent that stood out, it's still nice to know that it's a current project. The filing date on this version of the filing is noted as being August 2011 or four months ago. Is someone sending us a message here? In time, we'll know. But for now, it sure sounds good to me!

Oh, by the way, I see that my competition is making it out to be an all new patent. Ha! I guess that they didn't get the memo.

The Use of Our Graphics: We'd ask those covering our report to limit the use of our graphics to a maximum of two. Thank you.