Apple Shows us Just How Cool Future iOS Devices Could Be 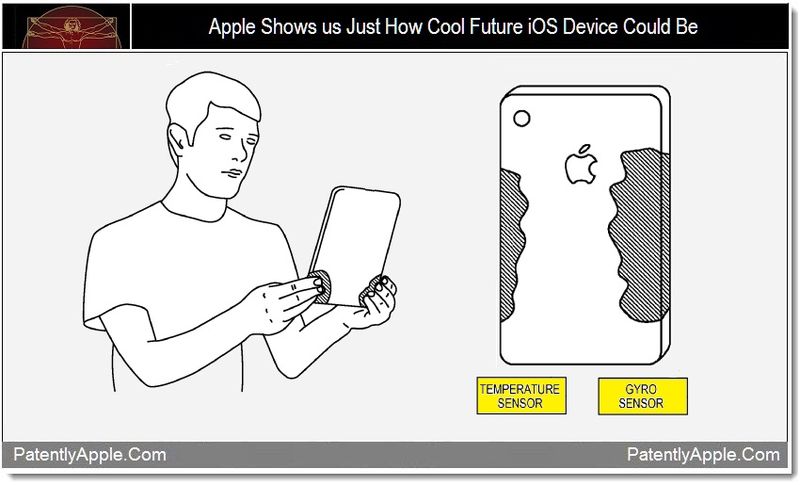 On December 8, 2011, the US Patent & Trademark Office published several patent applications from Apple that reveal their work on cooling down the exterior of their entire mobile device lineup from iPad to MacBook. Metal exteriors obviously get hotter than other substrates and Apple's latest round of inventions touch on creating "monitoring thermal zones" within each device that could drop the internal temperature as required to keep the exterior cool to the touch. This is also important because heat affects the accuracy of the gyroscope found in all iOS devices. On that point, Apple is shown to have reengineered their gyro so that it'll run cooler in the future. While we all know that Apple offers some of the coolest mobile devices in world today, Apple is now forecasting that they'll have even cooler devices in the future, literally.

Most electronic products in use today generate heat. If unchecked the heat may result in reduced reliability of the product over time. Accordingly, measuring and controlling the thermal characteristics of a product are important design considerations. To resolve thermal issues, several proactive measures have been developed including reducing the speed at which a constituent processor of the product is running, engaging cooling fans, lowering a cellular network RF transmit power limit, dimming a display, etc. Many computer systems designed today require these proactive measures to provide adequate performance in order to not frustrate the user's experience with the device, under various thermal conditions.

Temperature sensors may be embedded or integrated inside the housing of the product, to sense temperature at various locations. Closed loop thermal control or management algorithms may be developed in the factory based on data collected from these temperature sensors while running the device in its various normal operating modes. The algorithms are then stored as thermal control software (part of a thermal control subsystem) in each of the individual production specimens of the device. A processor runs this software during the in-the-field use, monitoring or collecting data from the temperature sensors over time and then analyzing the data and comparing to predetermined constraints, to make decisions on which thermal actions to take in order to effectively manage the thermal behavior of the device so as to maintain or regulate the temperature of a given location within a specified constraint.

Temperature sensors are often embedded within large integrated circuits, which could only be placed at a limited number of locations inside the computer system housing. Also, using a large number of discrete thermal sensors (e.g., thermocouples, thermistors) may in some cases be cost-prohibitive. Temperature sensors may be placed in various places within a computer system such as, for example, on the microprocessor (CPU) die, in the proximity of the CPU die (CPU Prox), on a motherboard, on a hard drive device, on a heat pipe, on a battery, on a track pad, etc. However, very often, a desired spot whose temperature needs to be carefully monitored or regulated in order to not exceed a specified limit may be located at a particular point where it is difficult to put a sensor, such as the bottom face of the case of a laptop computer system or the rear face (back plate) of a smart phone device.

Proactive measures may then be taken by the closed loop thermal control subsystem using this estimated temperature data (together with data from actual temperature sensors and data indicating current power consumption levels by various components in the device), to mitigate the thermal behavior at a critical point, such as turning on a system fan, lowering power supply voltage of a nearby component, and so on.

Thermal control is particularly challenging for a consumer electronic portable electronic device that is held and carried by its user while in operation, such as a cellular telephone, smart phone, digital media player and the like. Such devices are usually small and densely packed so that heat may not be easily dissipated. Furthermore, such devices are frequently in intimate contact with a user's skin so that customer satisfaction concerns arise if the thermal characteristics of the device are not properly managed. As a result, manufacturers of electronic products design the thermal control subsystem to limit the exterior surface temperature to levels that promote user comfort.

Embodiments of the present invention provide a method for monitoring thermal zones or regions in an electronic device and using that to control the thermal behavior of the device as part of a closed loop thermal control process. In the case of a portable electronic device, the closed loop thermal control process is designed to maintain a desired performance level of the device (e.g., the maximum possible) while avoiding excessive heat levels on the outside surface of an exterior housing of the device that would compromise the user's comfort level while holding the device in her hand.

In one embodiment, temperature readings are taken with a number of temperature sensors that are embedded or integrated in the electronic device. A zone is defined by several spaced-apart, distinct points or spots in the device. Some or all of these may be spaced apart or remote from the sensors.

In addition, in the case of a portable device, some or all of the points that define the zone may be on the outside surface of the exterior housing of the device, generally within the areas with which the skin of a user of the device would usually be in contact during normal or in-the-field use of the device.

A zone constraint or threshold is also specified for the representative temperature, where the zone and its constraint may be based on a human user's sensory resolution (e.g., how a human user would feel the heat of the device through her hand that is holding the device). If it's then determined that the computed representative temperature of the zone exceeds the constraint or threshold, then measures are automatically taken to reduce the amount of heat generated in the device. The zone may be defined to have dimensions approximately equal to the touch sensory resolution of a user of the device.

Using the concepts of a zone and a representative temperature for the zone would likely improve system performance, while satisfying the constraints that are based on the customer's sensory resolution. That is because limiting a surface or component operating temperature without accounting for spatial variation and geometric scale could be overly constraining. For example, restricting the performance of a portable device to ensure that a certain critical point does not exceed a stated operating temperature range, where the critical point is really too small for a person (whose skin is in contact with the critical point) to feel sufficient heat therefrom, would detrimentally impact performance with no realized benefit.

An embodiment of the invention advantageously uses the concept of a zone (and its associated "zone-specific" constraint), rather than an individual point or spot, to manage the thermal behavior of the device so as to maintain a higher performance level by the device while still providing a pleasant experience for the user whose skin is in contact with the zone during operation of the device. 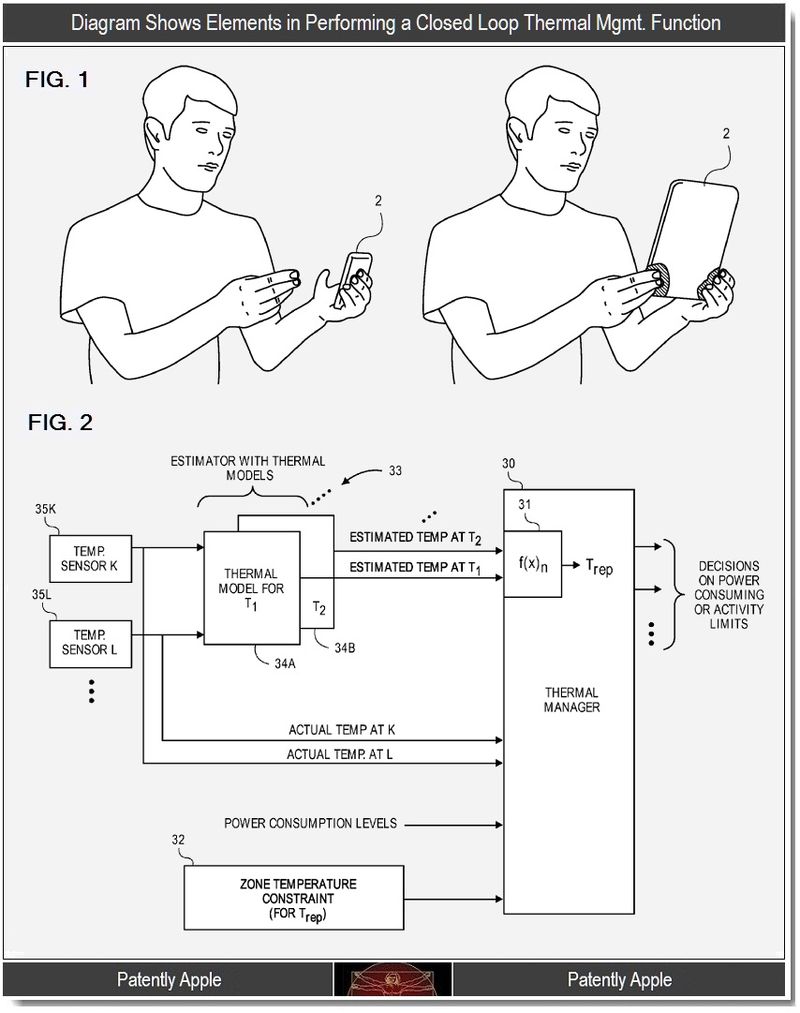 Apple's patent FIG. 1 of the patent titled "Thermal Zone Monitoring in an Electronic Device," we see users holding different types of computing systems such as an iPhone and iPad; FIG. 2 is a block diagram of some of the elements that may be involved in performing a closed loop thermal management function in these types of computer systems. 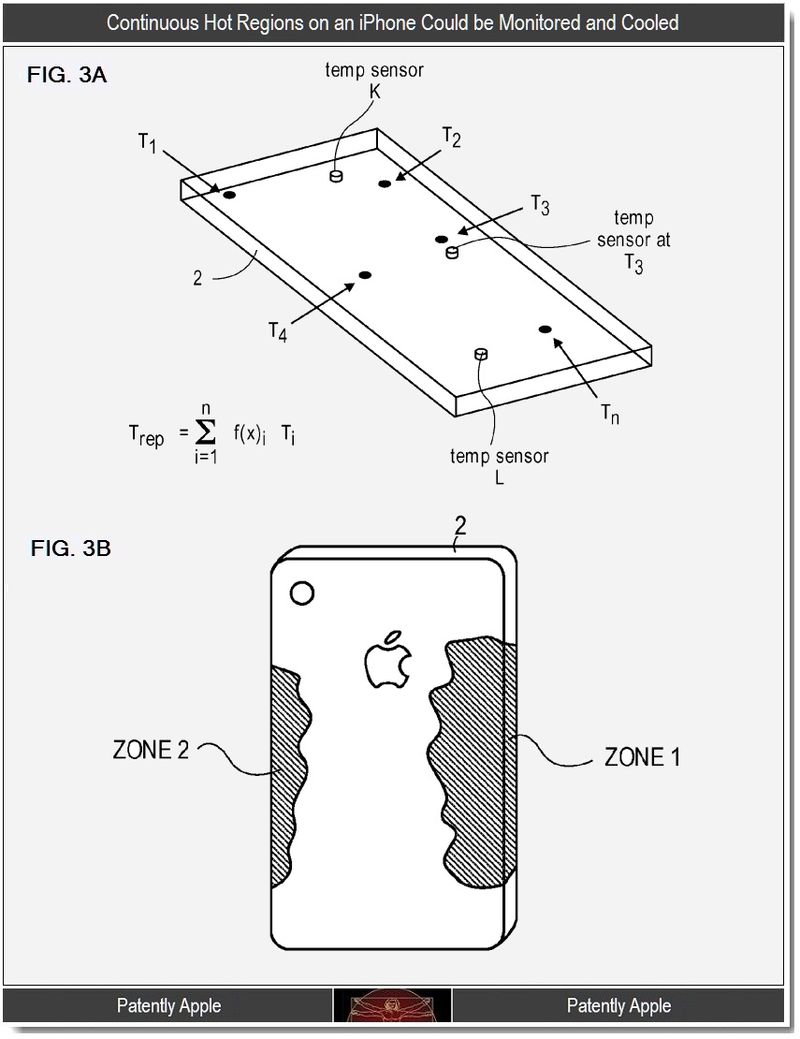 In Apple's patent FIG. 3A of the same patent, we see a number of selected temperature points or spots in a computing system that define an example zone or region to be monitored; FIG. 3B shows example zones as continuous regions, on the outside surface of the housing of a multi-function handheld mobile device.

In a secondary patent on the same subject matter titled "Adjusting the Thermal Behavior of a Computer System using Indirect Information about Ambient Temperature," we see another set of patent figures that sheds more light on Apple's invention in the bigger picture. 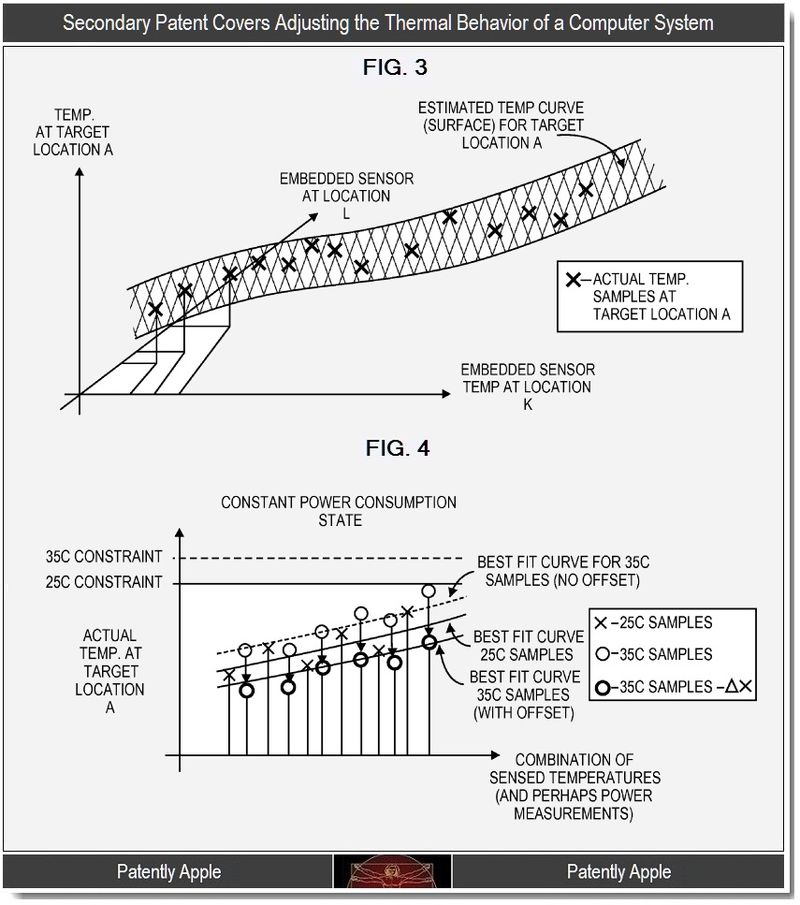 In a third patent relating to reducing heat within iOS devices, Apple is discussing the use of a gyroscope. The patent states that gyroscopes (or gyros, where the term is generically used here to refer to angular rate, turn rate, or turn speed sensors) have been suggested to be included in consumer electronics personal mobile devices such as multi-function cellular phones and smart phones. In such a multifunction handheld portable device, the gyro may be used by applications that measure heading changes (for example, in-the-field of navigation) or for measuring the rate of rotation as may be needed by a video game application. 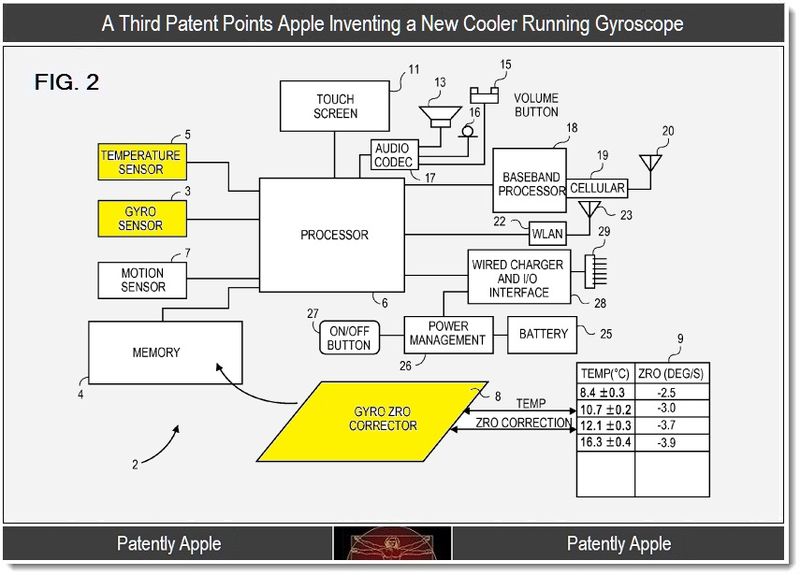 One weakness of a gyro is that they're particularly sensitive to temperature, in that its turn rate output signal (indicating the sensed rate at which the gyro package is rotating about a given axis) exhibits significant fabrication process variation as well as temperature variation. Apple's latest patent covers a new way of controlling the temperature of the gyro to run optimally at all times.

The Use of Our Graphics: We'd ask those covering our report to limit the use of our graphics to a single graphic of your choosing. Thank you.