Apple Shares their Vision for a New Kind of Smart Kiosk 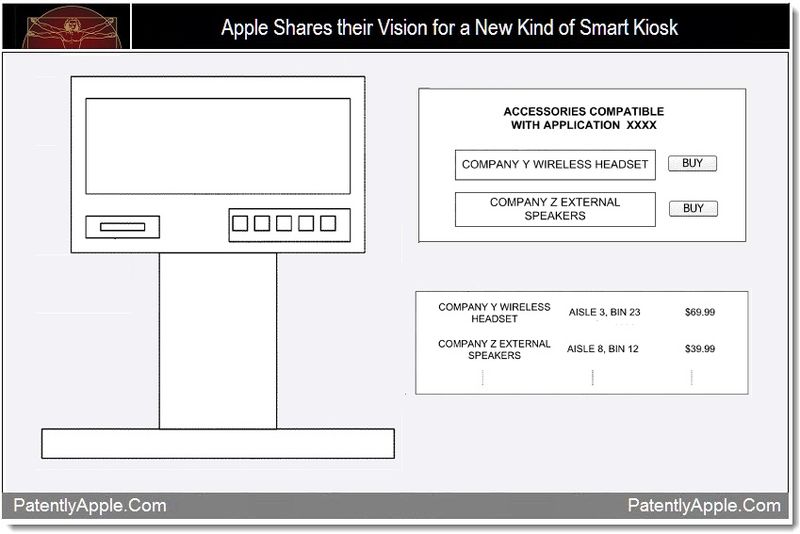 Every once in a while we get a rare treat and get to read about Apple's vision for something new they're working on. Today it's about a new smart kiosk. Although Apple has been kicking this concept around for some time now in regards to an iTunes based Kiosk or even an iCard & Gift kiosk, I think that this time around they may have hit the right market nerve. Apple's latest in-store kiosk may reside in an Apple Store or another retailer like Best Buy. The idea is simple. You have a new iOS device and you want to find the right accessories or apps for it. You wander into a store with an Apple Kiosk and connect your device to the kiosk which uses a new determination server that will check out your device and lists recommendations. If you're searching for something specific you'll be able to narrow down your search for something like speakers or headsets. One could easily see how Apple could sneak Siri into this kind of device one day to simply dazzle the consumer. This could be the perfect way to introduce Siri to the general public and that's why I think Apple's vision for the perfect kiosk may have finally arrived.

Apple's patent overview begins with them stating that consumers are increasingly demanding devices that could perform multiple tasks. Recent advancements in smart phones and other portable communication devices are geared towards making these devices as versatile as possible. 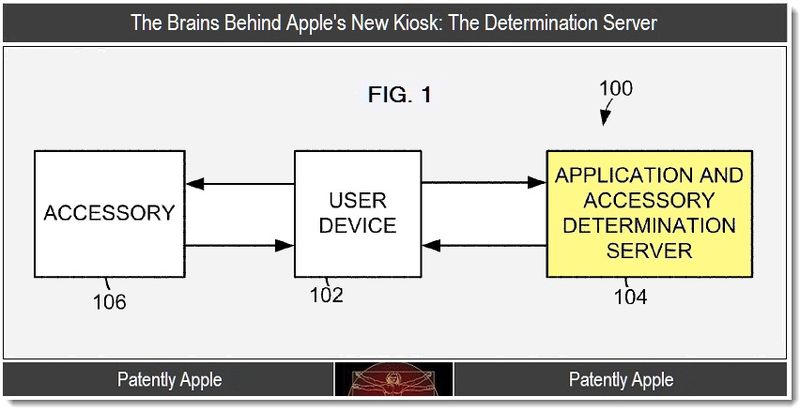 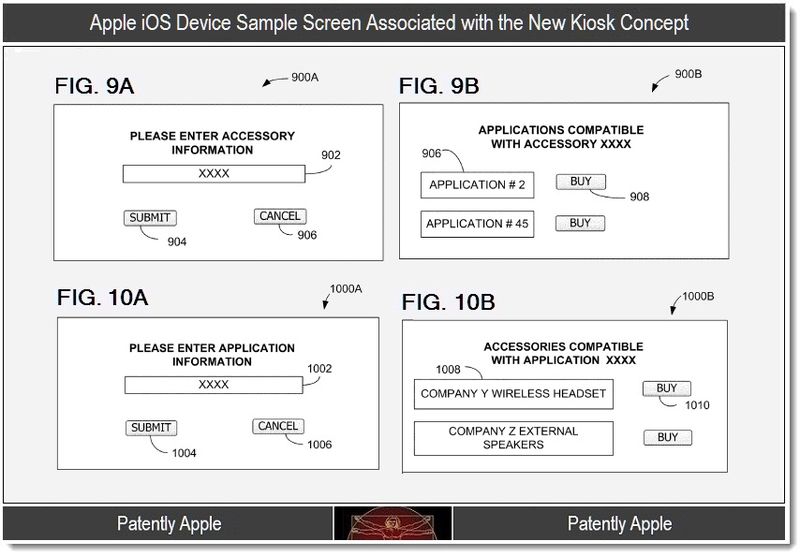 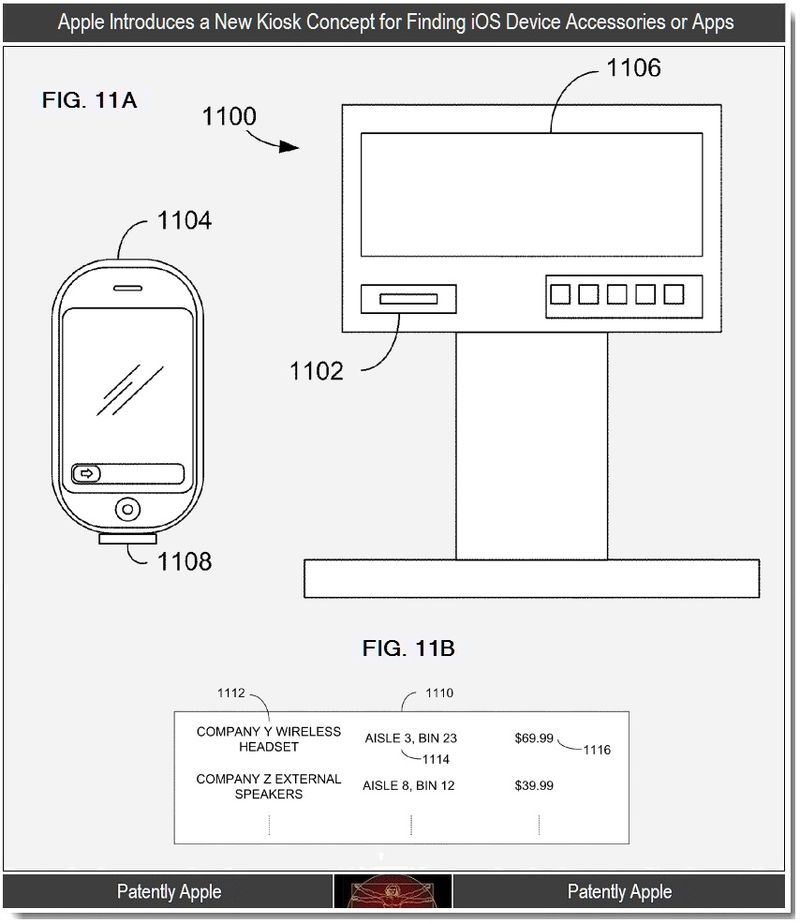 Apple's patent FIG. 11A shows a kiosk 1100 that could include a connector 1102 for connecting to a user device 1104 and a display 1106 for displaying results of the accessory and/or application search. In some embodiments, the kiosk could be located in a brick-and-mortar store that sells accessories for multiple types of user devices. In other embodiments, the kiosk could be located at any location generally accessible to the public e.g., malls, train stations, airports, etc.

Although an iOS device could be connected to the kiosk via a physical connector for easy convenience as shown above as patent point1108, wireless techniques will be able to establish a connection to the kiosk.

In an embodiment, the kiosk could be placed at a trade show and could provide information about all the accessories and applications being presented at the trade show, e.g. Macworld. A user could connect his user device to the kiosk and get information on the various accessories and applications that are compatible with his user device from among the ones being showcased at the trade show. Now that's very cool.

Apple's patent FIG. 12 shows a sample screen 1200 that shows information that may be presented to the user for a particular accessory. Merchants A and B could be on-line retailers and the "visit store" buttons could be links to their on-line retail sites. Presenting the information in such a manner enhances the user experience and simplifies the user's shopping experience. 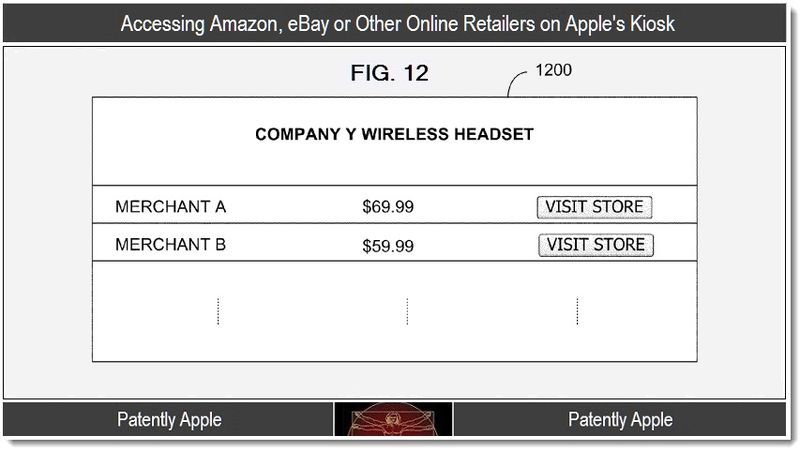 Once the store communication devices have determined the applications resident on the user device, this list may be presented to the sales personnel within the store. The sales personnel could then guide the user to appropriate accessories and/or applications similar to the resident applications without the user even having to explain what he is looking for. This will present a unique shopping experience for a user and could lead to increased business and/or repeat business from satisfied users.

With such a new kiosk, the public could finally get a taste for Apple's sales slogan "There's an App for That" in style and substance. And who knows, maybe they'll even get to talk to Siri and get some straight answers that are better than the ones that an average in-store sales rep could provide. Time will tell.

This is a great idea. The Kiosk should be in the shape of a giant apple with 5 or 6 loading stations around the perimeter. Also, the kiosk needs to be considered for the lower income part of the population. They want an ipod, they receive an ipod but then have no way to load the music and may not for several years. I would suggest a kiosk in every walmart/target/k-mart in the country. By giving back you have bought customers for life. Also, when purchasing a new ipod, the device should come with songs already loaded, top 40 from the past ten years. I know people would actually pay more for songs already loaded.

Secondly, how about a charity to give out free music and ipods? This idea hit us when a young underpriveleged girl from an angel tree asked for ipod. That would be great but how would she load it legally and how would she update it?