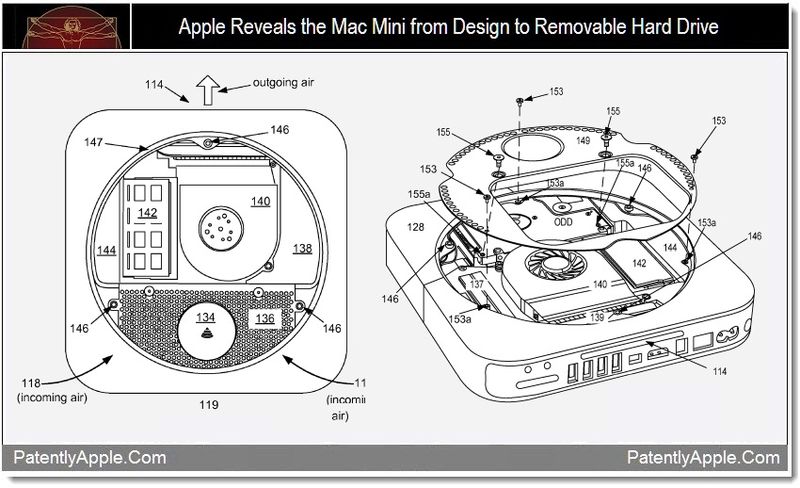 On December 15, 2011, the US Patent & Trademark Office published a series of six patent applications from Apple that reveal everything you ever wanted to know about the Mac Mini but were afraid to ask. Apple's main patent describes the aesthetically pleasing Mac Mini, simply referred to in the patent as a "small form factor desktop computer." The other patents within this group describe the Mac Mini's cooling system, internal electronics, manufacturing fixtures and removable hard drive. In fact they describe the latter as being an easy-to-remove hard drive which may be of interest to some. And lastly, we cover a new patent application from Apple that reveals the assembly of the fifth generation iPod nano. It was only filed four months ago which begs the question: Why?

Everything You Ever Wanted to Know About the Mac Mini

In Apple's main Mac Mini Patent they describe a small form factor desktop computer that is formed from a single piece seamless housing that in the described embodiment is machined from a single billet of aluminum. The single piece seamless housing includes an aesthetically pleasing foot support having at least a portion formed of RF transparent material that provides easy user access to selected internal components as well as offers electromagnetic (EM) shielding. This simplicity of design could accrue many advantages to the small form factor desktop computer besides those related to aesthetic look and feel. Fewer components and less time and effort could be required for assembly of the small form factor desktop computer and the absence of seams in the single piece housing can provide good protection against environmental contamination of internal components as well as EM shielding. 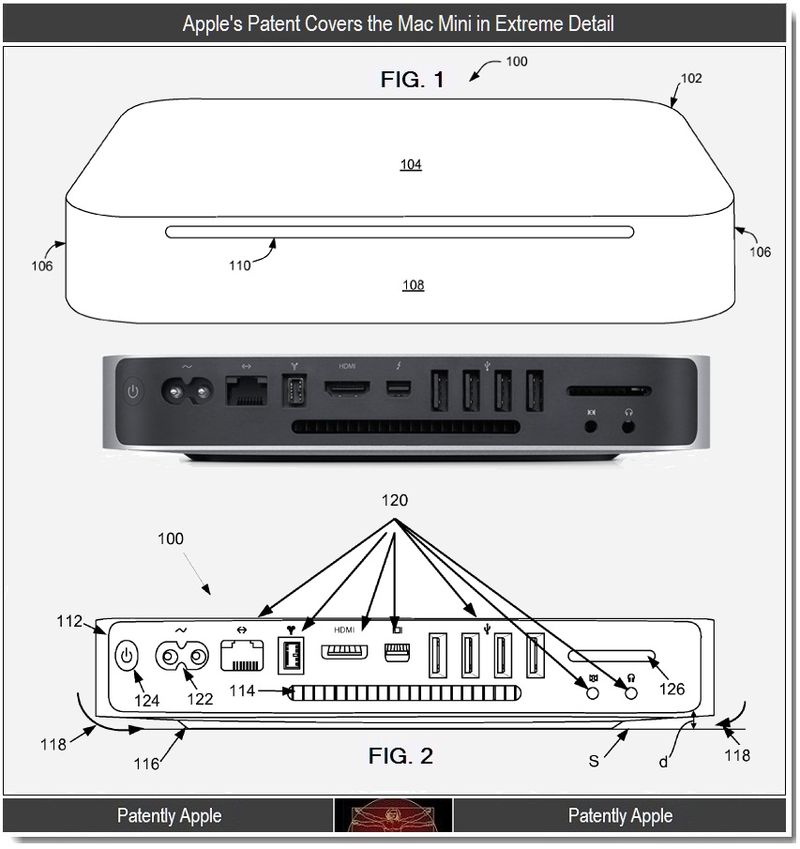 About Apple's Patent Figures: Apple's patent FIG. 1 shown above illustrates a front perspective of the Mac Mini or "small form factor desktop computer." The design includes a single piece seamless housing 102 formed of metal such as aluminum. The aluminum could take the form of a single billet that could be milled and further processed into a desired shape. In some embodiments, the aluminum housing could be anodized to provide a protective surface layer that resists scratches and corrosion maintaining an attractive metallic appearance; In patent FIG. 2, we see the rear view of the Mac Mini shown in FIG. 1; Apple's patent FIG. 3 below illustrates the bottom view of the Mac Mini; patent FIGS. 4A and 4D shows a bottom view of FIG. 3 where a foot has been removed to expose internal components; and patent FIG. 25 shows a technique for inserting and installing a main logic board (MLB). 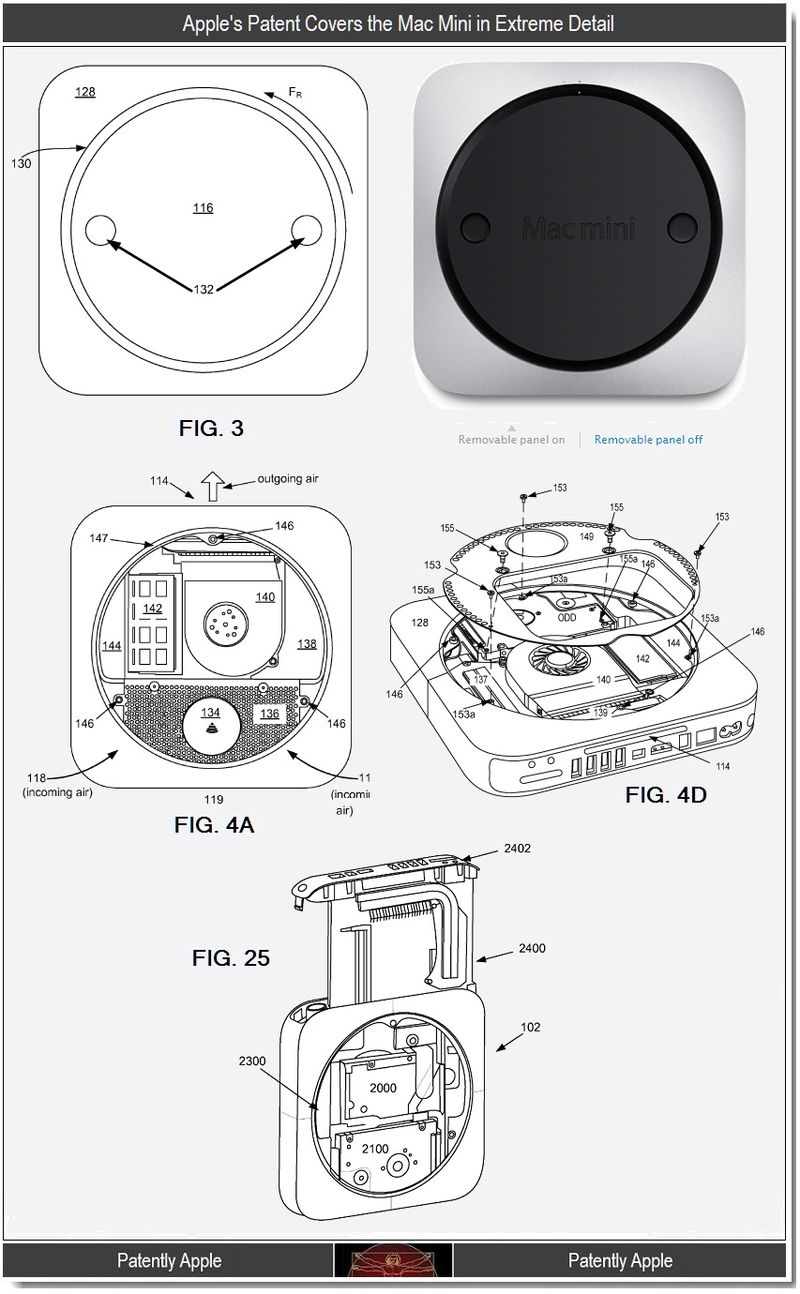 Apple's patent FIG. 16 illustrates bezel 1504 which could include several attachment and alignment features used for installing at least the optical disc drive (ODD) and the removable hard disc drive (HDD). For example, grommets 1510 could be elastomeric in nature and could be sized and located to accommodate correspondingly sized and spaced posts on the HDD.

Since the HDD is not permanently attached to the bezel using fasteners such as screws or rivets, the HDD could be easily installed and just as easily removed if necessary by merely reaching into lumen 1502, grasping and extracting the HDD. Accordingly, the HDD could be considered to be a removable HDD. 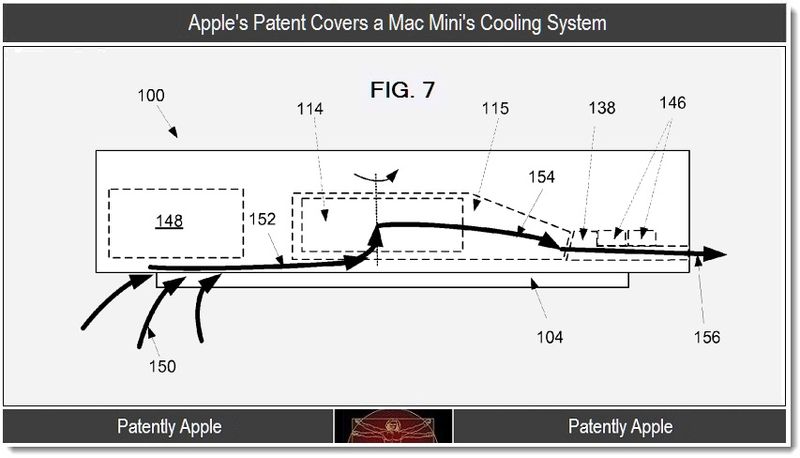 According to the patent, the continuing airflow path 154 exits the fan 114 and blower 115 arrangement into the air processing manifold 138, where it encounters a plurality of angled fins arranged in a pattern. A heat pipe or exchanger 146 could have one or more surfaces exposed to open sides and top portions of the corridors defined by the angled fins, such that the airflow cools such surfaces of the heat exchanger. The heated air then exits the device at exhaust output region 156.

Oddly Apple has filed a new patent application for the assembly of the now defunct fifth generation iPod nano as shown below.  The question is, why? The patent application was only filed in August 2011 or four months ago. The patent application is neither associated with another patent nor considered a continuation patent. Is the current iPod nano not selling well? Did Apple receive overwhelming feedback to bring back the older design? We have questions without any answers. If you have an idea on this, then send in your comments. 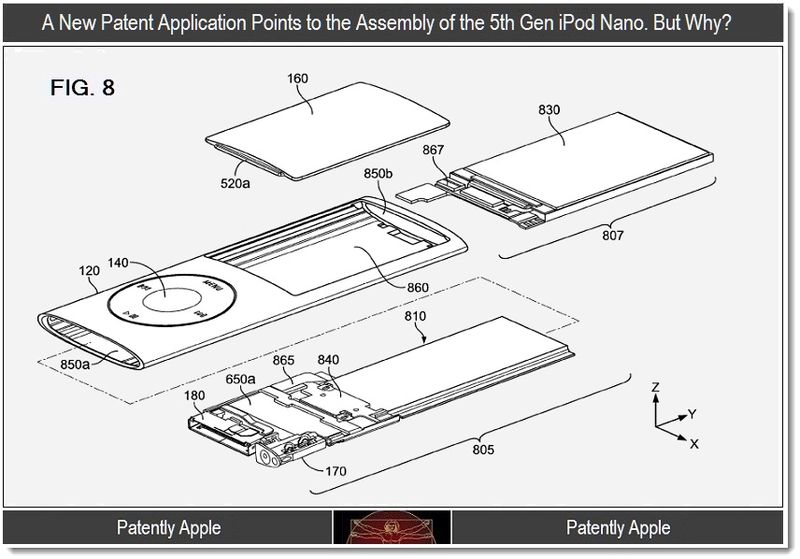