On December 1, 2011, the US Patent & Trademark Office published a patent application from Apple that reveals a new two-fold invention. The invention, which is likely a part of an extensive internal research project, is centered on both the use of new light weight and flexible materials for portable devices like the iPad and MacBook Pro and the method of constructing said devices. I doubt very much that this is something that's just around the corner, but Apple's multiple patents on this topic of new materials and processes are every increasing.

Portable Devices Made of Metal and Plastic Don't Cut it Anymore

Many electronic devices, including portable devices, have housings made of plastic today. Plastic enclosures tend to be relatively inexpensive and simple to manufacture but may be brittle and crack under relatively low stresses or impacts. Other electronic devices have metal housings. Metal casings are durable but may be heavier and/or more expensive to manufacture than an equivalently-sized plastic casing.

Some electronic devices use a reinforced plastic housing. For example, certain devices may have a housing formed from carbon fiber reinforced plastic (CFRP). A standard CFRP may be made of multiple layers, each of which typically has carbon fibers aligned in a plastic matrix such that the fibers all extend in substantially the same direction within that layer. The carbon fibers impart structural strength and resistance to bending and breaking against force applied transversely to the length of the fibers. CFRP materials generally have a high strength to weight ratio and weight to stiffness ratio. However, CFRP materials generally do not resist bending or stresses applied in a direction transverse to the length of the carbon fibers. Further, CFRP may be thicker than a corresponding plastic or metal electronics enclosure having similar weight and/or stiffness.

In September 2010 a published Apple patent revealed their research into improved Composite Laminates for a possible future iPad and later that year we learned about an all new 3D knitting process that they were considering to help create the body of this possible future iPad. Well, Apple is at it again. Their latest patent published today describes a possible new way of constructing computer devices and/or hardware such as a future notebook, iPad, iPhone, iMac, Cinema Display and more.

Apple states that in some embodiments, carbon fiber reinforced plastic (CFRP) materials are assembled in a sandwich configuration around a core material, such that the CFRP material forms a "skin" enclosing, partially enclosing, extending across surfaces of, or extending from the core material. The sandwich structure or configuration may then be used to enclose and otherwise provide housing for electronic components, such as those used for portable electronics.

The core of the sandwich material in some embodiments is foam, honeycomb, end grain balsa, and/or other relatively lightweight materials. The CFRP materials in these embodiments may form an outer and inner layer with the core material positioned therebetween, such that the CFRP material may generally encase or overlay at least portions of the core.

In some embodiments, the core may be made from a material having a lower density than that of the outer and inner layers. In certain embodiments, the sandwich structure may be lighter in weight and stronger than a similar structure formed of non-sandwiched CFRP materials, aluminum, steel, plastic, and the like.

The sandwich configuration may provide lighter weight and have a higher flexural rigidity than housing made of solid materials, because the distance between the two layers of CFRP materials may be increased while a minimum amount of weight is added through the use of the interior material. In other words, the interior or core material is generally lighter than the sandwiching material and thus provides a weight savings over the use of a structure made entirely from the sandwiching material and having similar dimensions.

Still other embodiments may include a method of manufacturing a protective case, including placing a first skin in a mold, placing a core adjacent to the first skin. Placing a second skin in the mold, the second skin is adjacent the first skin. Curing the first and second skin about the core to form a shell and bonding the shell to a magnesium frame to form a housing. Elsewhere in the patent Apple states that the solid aspect of the device's housing could be constructed out of aluminum, plastic, steel, magnesium and/or titanium. Yet the core of the patent, of course, is doing away with such materials and focusing in on the "sandwich construction." It's being considered due to its lighter housing and its capacity of providing an overall stronger flexural rigidity than the solid housing made of metals. 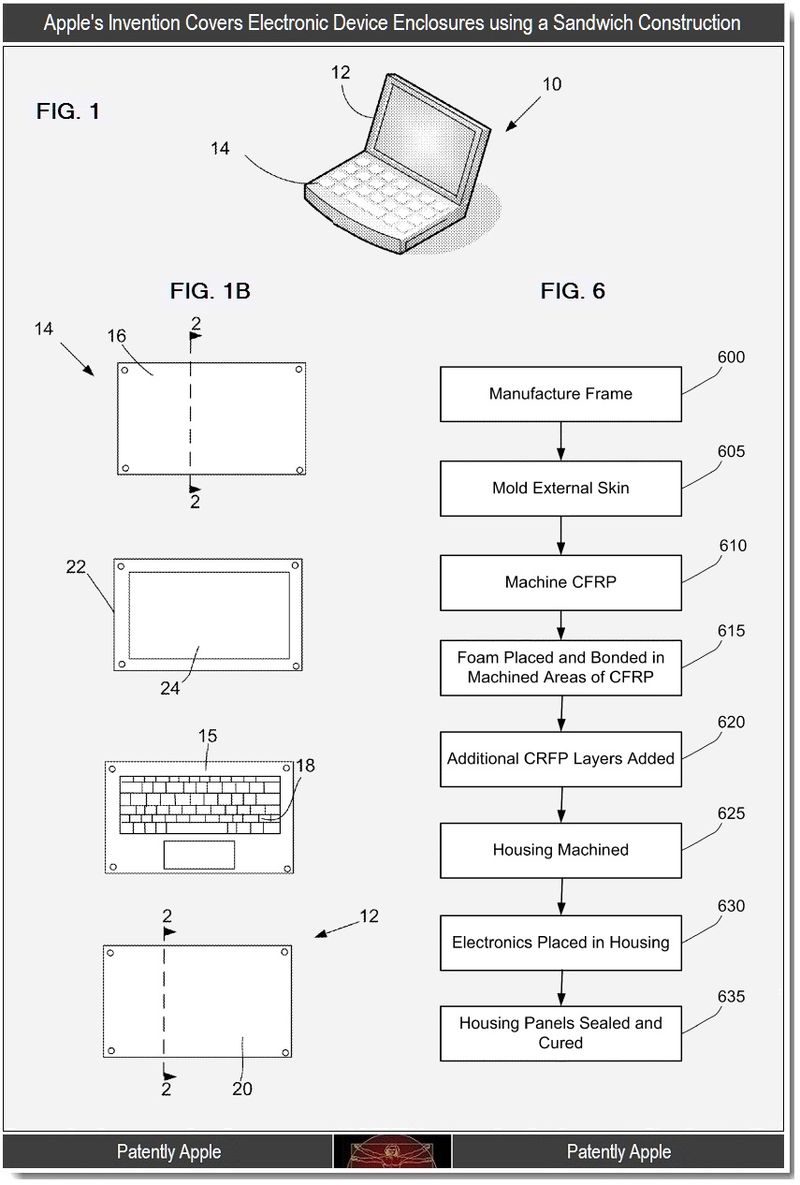 In Apple's patent FIG. 1A shown above we see a perspective view of a laptop. In patent FIG. 1B Apple illustrates the external housing components of laptop 10 in an exploded view covering the screen front panel (22), a back panel (16), a keyboard panel (15) and back screen panel (20).

The housing generally provides protection and security for the internal components and may prevent the connections and components from being damaged due to a user dropping, throwing, scratching, denting, or the like.

Apple's patent FIG. 6 is a flow diagram illustrating a method of manufacturing a housing including the sandwich configuration. One of the odd notes in the patent covers how the sandwich construction could be used for other non-electronic applications, such as storage boxes, luggage, non-digital cameras, and other applications that may require lightweight, high flexural rigidity casing.

It's unknown at this time whether Apple is researching these types of materials and methods of construction in order to create an Econo-Line of products down the road; have a backup plan in order to save money if times get tougher; or that they truly believe this is the future for portables. In time we'll know. But until such time, if you have an opinion on this subject then please send in your comments.