What's next for the iPod Shuffle/Nano? A Speaker Clip of Course

On November 11, 2011, the US Patent & Trademark Office published a patent application from Apple that reveals one of the next chapters for Apple's mini media players such as the iPod shuffle and iPod nano. Apple's proposal is to add a speaker to the media players attachment clip. Apple points out how they may use a space age material in the design of the speaker that was once used in NASA's Apollo lunar module. I guess that Apple wants to give their fans a unique out-of-this-world experience. Oh those Crazy Ones of Cupertino are at it again.

Apple is thinking that a speaker clip for the iPod shuffle and nano would be a natural evolutionary step for their media players. Being that most of us are aware of these mini media players, we'll just jump right into the details of Apple's proposed speaker clip. 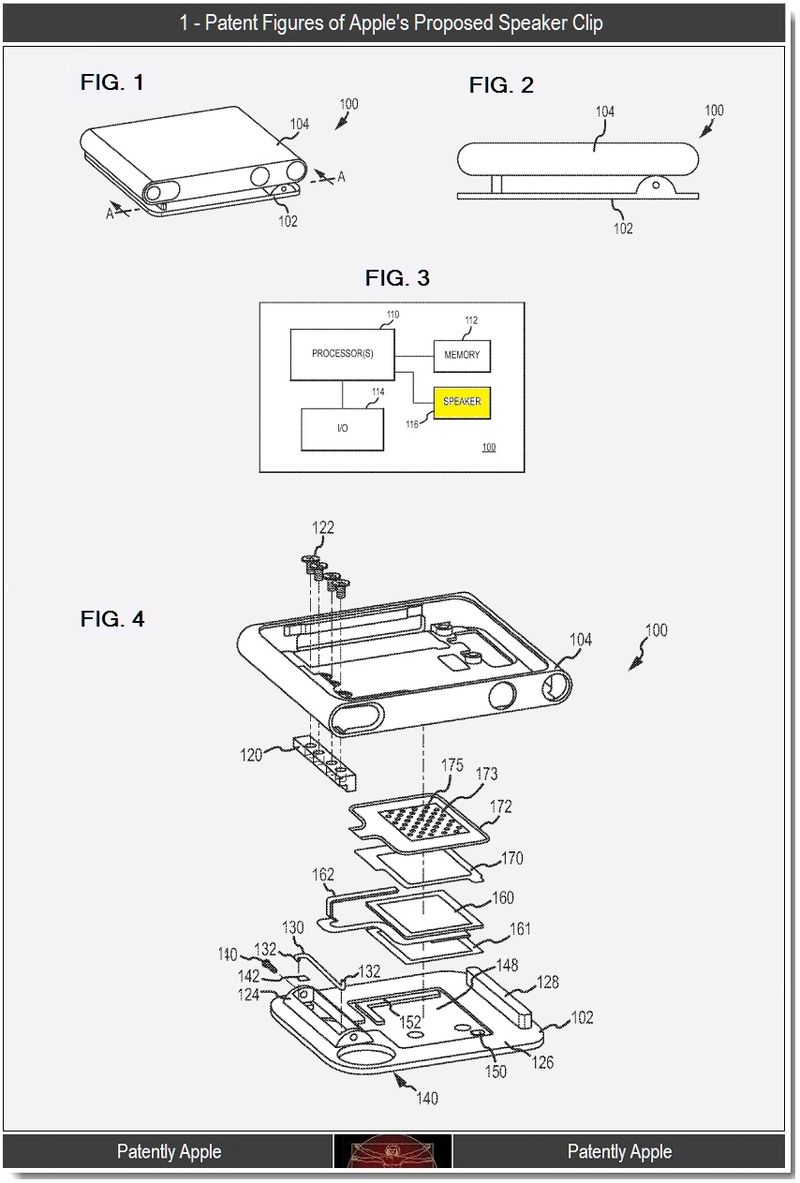 One or more additional layers may be provided over the piezoelectric speaker to secure the speaker in place, protect the speaker, and/or to provide aesthetics.

The smaller holes still allow for sound to pass through but limit dust and moisture intrusion. The mesh layer may be made from materials different from those of the cover. For example, the mesh layer may include materials such as fabric woven from plastic, metal, or natural fibers.

The New Attachment Clip May use a Kapton Film Layer

In some embodiments, the thin layer 180 may be an approximately 0.05 mm Kapton film layer that is only in a few small spots such as under the electrical attachment point. Kapton is a polyimide film developed by DuPont which could remain stable in a wide range of temperatures, from -273 to +400 °C (-459 - 752 °F / 0 – 673 K). Kapton is used in, among other things, flexible printed circuits (flexible electronics) and thermal micrometeoroid garments, the outside layer of space suits. Kapton was used extensively in the Apollo program. It was used as thermal insulation on the Lunar Module. You know Apple; they just love to give their consumers an out-of-this-world experience – ha!

In some embodiments, the cover plate 172 may have a particular shape to provide specific acoustical effects. For example, the cover plate may have a domed feature 174, as illustrated in FIG. 6 below, or other geometric shape. The domed feature may be used to increase the volume of air that may be displaced by the diaphragm of the speaker and/or may also provide for improved frequency response at lower frequencies. Other geometric shaped may be used to direct the sound output from the speaker and/or amplify the sound. For example, the cover may have a horn or fan shape that would help to amplify the volume of the sound. 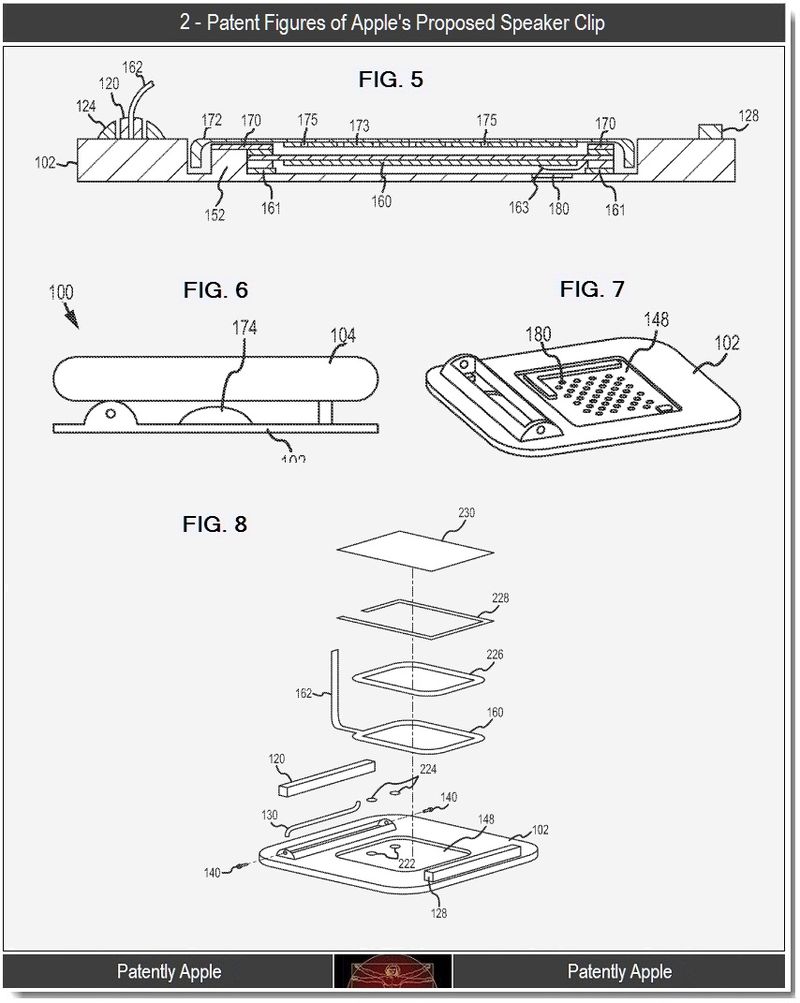 In some embodiments, an interior surface of the recessed portion 148 of the attachment member 102 and/or the interior surface of the cover layer 172 may be dimpled, as shown in FIG. 7. The dimpling may be configured to provide increased air space without sacrificing the structural integrity of the surfaces. As such, the dimples may have a depth, diameter and spacing that preserves the strength of the surfaces. In some embodiments, the dimples may be arranged randomly while in other embodiments, the dimples may be arranged in a grid pattern or other pattern that may be determined to provide an improved sound quality.

Apple's patent FIG. 8 illustrates an exploded view of the attachment member in accordance with an alternative embodiment.

Obviously there are times when you want to hear your music while you're walking but need to be aware of your surroundings for safety reasons. Apple's solution will provide that option that parents may appreciate for their kids.

Thats obviously not a huge deal for Apple to make a change like that, but I think it will come in pretty handy to have the speaker clip.