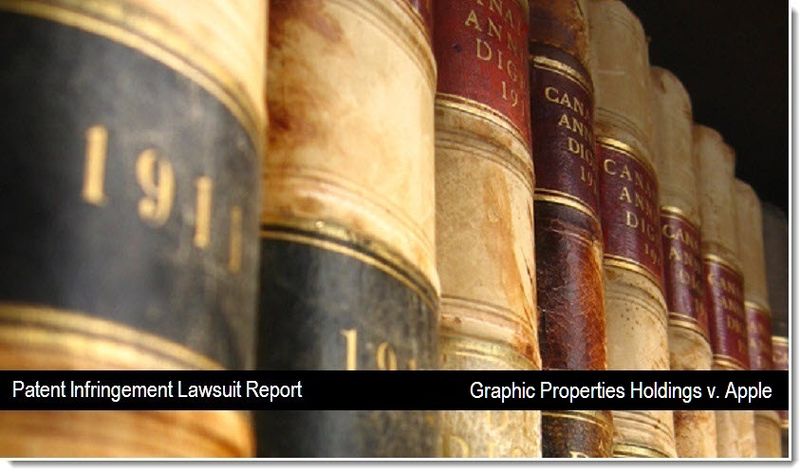 Background of the Plaintiff

The following is background information on Graphic Properties Holdings, Inc. or GPH: GPH is a Delaware corporation with its principal place of business at 56 Harrison Street, Suite 305C, New Rochelle, New York 10801. Plaintiff GPH is the lawful assignee of all right, title and interest in and to the (6,650,327) '327, (6,816,145) '145 and (5,717,881) '881 Patents (collectively, the "Asserted Patents"). GPH was formerly named Silicon Graphics, Inc. As Silicon Graphics, GPH developed technology and intellectual property used in the graphics, computer processing, and display segments. GPH is owned by private investment funds and other institutional investors, following the bankruptcy of Silicon Graphics. GPH continues to manage and license its intellectual property, including the '327 Patent, the '145 Patent, and the '881 Patent.

The following three counts were brought against Apple on November 23, 2011. Their first patent infringement case against Apple was filed in the New York Southern District Court in November 2010. In that case, the key patent was 6,650,327 which is also now the first patent filed in count one of this new case.

Plaintiff GPH is the assignee and lawful owner of all right, title and interest in and to the '327 Patent. Defendant makes, uses, sells, offers to sell and/or imports into the United States for subsequent sale or use products, services, methods or processes that infringe, directly and/or indirectly, or which employ systems, components and/or steps that make use of systems or processes that infringe, directly and/or indirectly, one or more of the claims of the '327 Patent.

Such devices are handheld computers, tablets, cellular telephones, and other consumer electronics and display devices and products containing same, including but not limited to Defendant's iPhone device and other substantially similar devices. 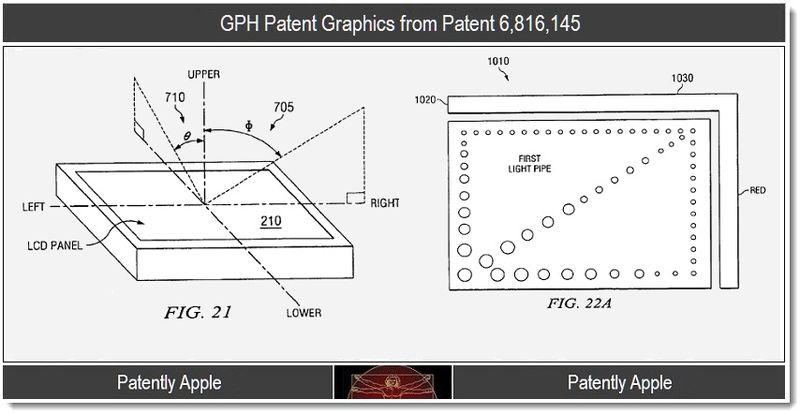 COUNT III: Count III covers United States Patent No. 5,717,881, entitled "Data Processing System for Processing One and Two Parcel Instructions." In this patent, we see that the assignee is noted as being Cray Research. This particular invention generally relates generally to the field of computer processors and more particularly, it relates to an improved high performances computer processor that is capable of scalar and vector processing.

On all counts, GPH states the following: The Defendant has been and continues infringing one or more of the claims of the [patents listed above] through the aforesaid acts, and will continue to do so unless enjoined by this Court. Defendant's wrongful conduct has caused Plaintiff to suffer irreparable harm resulting from the loss of its lawful patent rights to exclude others from making, using, selling, offering to sell and importing the patented inventions. Plaintiff is entitled to recover damages adequate to compensate for the infringement.

The case was filed in the Delaware District Court. GPH is requesting a trial by jury.

Sidenote: Whether this will be relevant in this case or not, it should be noted that Apple has been granted two patents covering a "Macroscalar Processor Architecture." You could find the patent numbers listed in our November 2009 granted patent report.

I suppose. But if my legal team was surprised at this juncture, I'd seriously be considering a new team. Not that this has anything to do with article or the disputes. I just think "surprised" more than likely overstates things of which we don't know. But it isn't like I have any insider information to counter the claim.

Considering that Apple filed 2 patent infringement cases against GPH first, I think that Apple was trying to quash the coming case. We don't know what's in Apple's complaint, but GPH struck by surprsie and successfully so in Delaware. It's very possible that Apple legal was surprised, as they're fighting and have their focus on Google/Andoid on multiple fronts.

Broken or no, the system exists to iron out such disputes. The only question I really have is, do you really think they "surprised" Apple?