IDC's Global Smartphone Stats are in: Samsung # 1, Apple # 2 and on the Rise 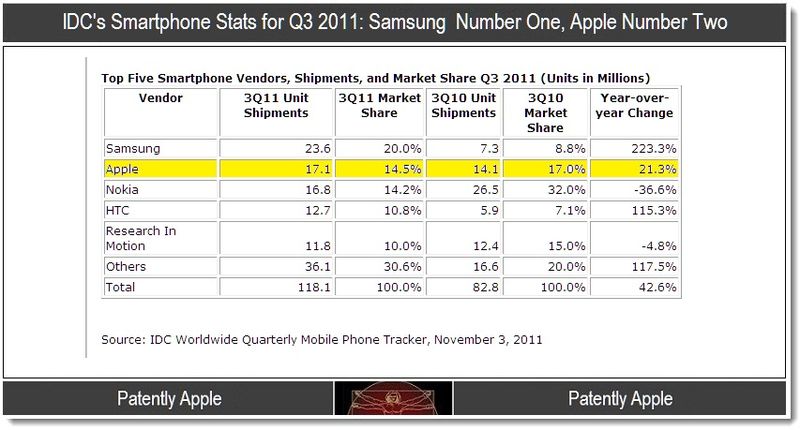 Last weekend we posted a report titled "The Flap over IDC's Report, Market Spin & the Ongoing Smartphone Wars." The numbers that IDC quoted in one of their latest report were definitely a point of contention for many concerning "mobile phone vendor shipments and marketshare for Q3 2011." This morning, IDC has released another round of stats concerning "smartphone" shipments and marketshare for Q3 2011. The new stats have Samsung as the number one vendor in the world with Apple overtaking Nokia for the second spot. Will the numbers enrage some in the Apple community once again? Yes, more than likely – but with Apple's iPhone 4S sales gaining traction, we're likely to see Apple take the number one spot as soon as next quarter. Then again, in this ever changing market, we can't really assume anything.

One: The worldwide smartphone market grew 42.6% year over year in the third quarter of 2011 (3Q11), despite a slowdown within key mature markets. According to the International Data Corporation (IDC) Worldwide Quarterly Mobile Phone Tracker, vendors shipped 118.1 million units in 3Q11 compared to 82.8 million units in the 3Q10. However, the 42.6% growth was lower than IDC's forecast of 49.1% for the quarter and lower than 2Q11 growth of 66.7%.

Two: "Samsung's ascendancy to the leadership position is the direct result of its broad and deep product portfolio," said Ramon Llamas, senior research analyst with IDC's Mobile Phone Technology and Trends team. "Ever since the first Galaxy device launched last year, the company has aggressively expanded and refreshed its selection to include the latest innovations and most popular features. At the same time, its line-up of bada-branded smartphones has earned a welcome reception within key markets.

Three: "At the same time, Samsung's position will be a challenge to maintain, both in the fourth quarter and beyond," added Llamas. "Apple's fourth quarter launch of the iPhone 4S and lower pricing of older models will certainly boost volumes, and Nokia's recent launch of Windows Phone smartphones marks the beginning of a new era for the company. While these point to larger volumes in the quarters to come, they will also lead to increased competition."

Worth Checking Out: A new report out this morning by Bloomberg is facinating: Apple's Supply-Chain Secret? Hoard Lasers