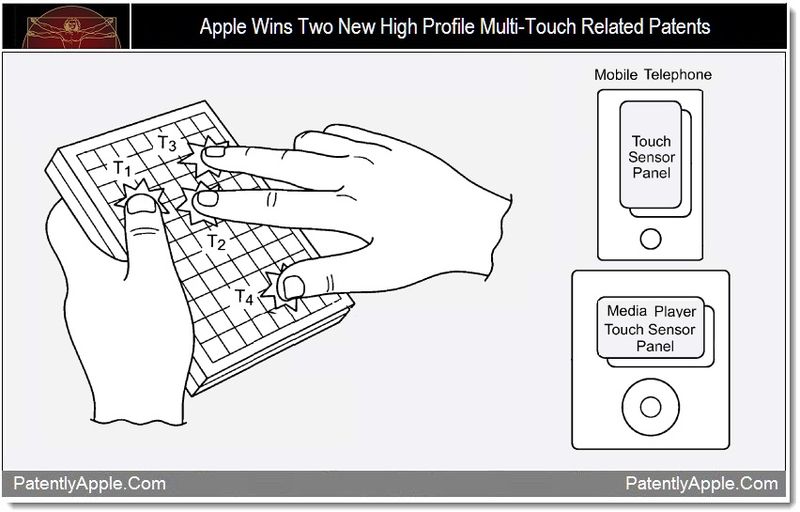 The US Patent and Trademark Office officially published a series of 14 newly granted patents for Apple Inc. today. In our third granted patent report of the day we cover two new high profile multi-touch related patents which cover Front-End Signal Compensation & Method for Forming a Crystalline ITO on top of a Nonconductive Substrate. The primary multi-touch patent presented today was originally filed in the very same month that Steve Jobs first presented us with a peek at their revolutionary smartphone simply called the iPhone back in January 2007.

Apple has won yet another Multi-Touch patent relating to Front-end signal compensation. The patent relates to the original 2007 iPhone.

Apple's patent FIG. 1 is a perspective view of a touch screen display arrangement, which includes a display and a transparent touch screen positioned in front of display. The display may be configured to display a graphical user interface (GUI) including perhaps a pointer or cursor as well as other information to the user. The Transparent touch screen is an input device that is sensitive to a user's touch, allowing a user to interact with the graphical user interface on the display. In general, touch screen recognizes touch events on a surface of the touch screen and thereafter outputs this information to a host device. The host device may, for example, correspond to a computer such as a desktop, laptop, handheld or tablet computer. The host device interprets the touch event and thereafter performs an action based on the touch event.

In one embodiment, the touch screen is configured to recognize multiple touch events that occur simultaneously at different locations on the touch sensitive surface. That is, the touch screen allows for multiple contact points T1-T4 to be tracked simultaneously. The touch screen generates separate tracking signals S1-S4 for each touch point T1-T4 that occurs on the surface of the touch screen6 at the same time. In one embodiment, the number of recognizable touches may be about fifteen which allows for a user's ten fingers and two palms to be tracked along with three other contacts. The multiple touch events could be used separately or together to perform singular or multiple actions in the host device. Numerous examples of multiple touch events used to control a host device are disclosed in U.S. Pat. Nos. 6,323,846; 6,888,536; 6,677,932; 6,570,557, and co-pending U.S. patent application Ser. Nos. 11/015,434; 10/903,964; 11/048,264; 11/038,590; 11/228,758; 11/228,700; 11/228,737; 11/367,749, each of which is hereby incorporated by reference in its entirety. 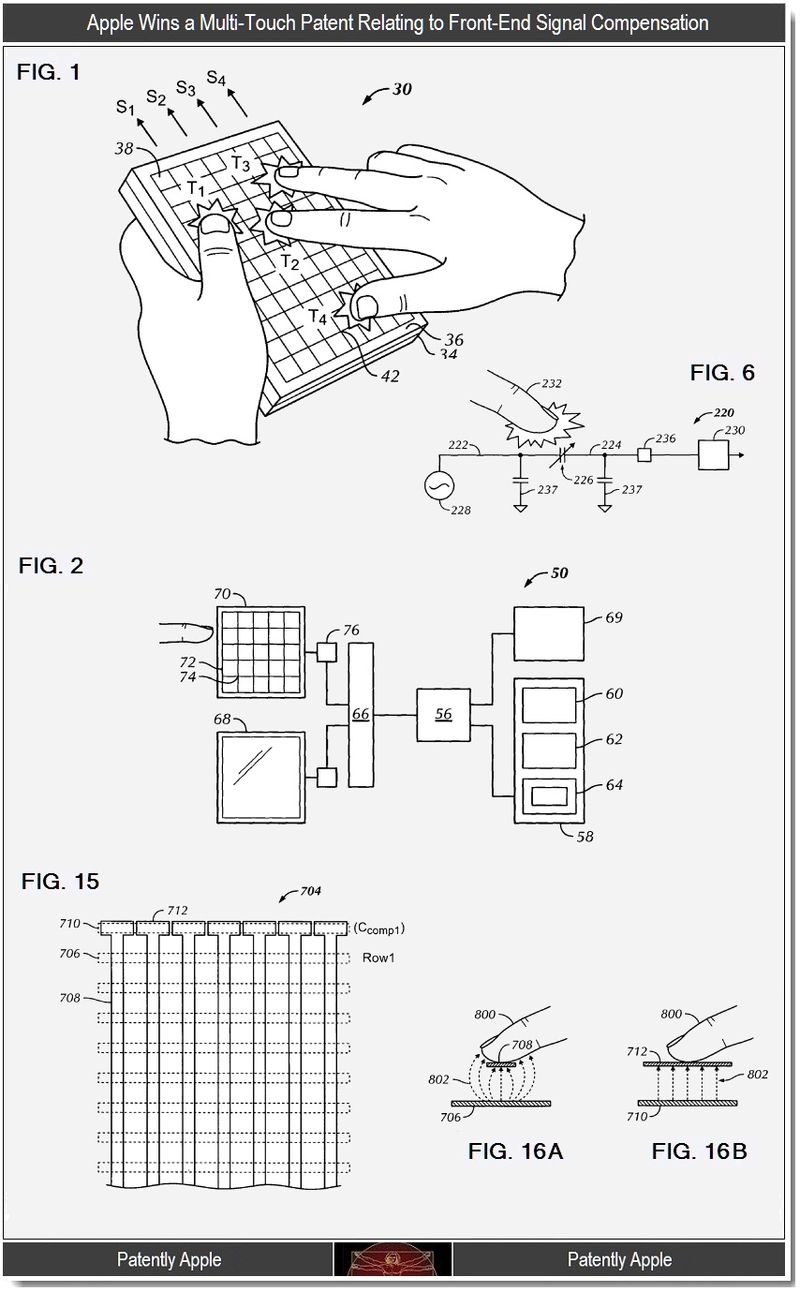 Apple's patent FIG. 15 illustrates a top view of an exemplary touch surface panel wherein a top row of the touch surface panel is utilized to generate a compensation signal; Patent FIGS. 16A and 16B illustrate a touch-sensitive capacitive sensing node and a touch-insensitive node that is utilized to generate at least a portion of a compensation signal.

To review Apple's other 40 patent claims and invention detailing, see granted patent 8,049,732. Apple credits Steve Hotelling and Brian Land as the inventors of this patent which was originally filed in Q1 2007 as Steve Jobs was presenting a peek at the original iPhone.

Mutual capacitance touch sensor panels could be formed from a matrix of drive and sense lines of a substantially transparent conductive material such as ITO, often deposited in rows and columns in horizontal and vertical directions on a substantially transparent substrate. Conventional processes for depositing high-quality, crystalline ITO could require a substrate to be exposed to sustained temperatures as high as 350 degrees C. However, such high-temperature processes may not be suitable for some applications.

Apple's invention relates to forming a crystalline ITO layer on top of a substrate by heating ITO to a high temperature while limiting a temperature increase of the substrate to less than a predetermined temperature. For example, a layer including amorphous ITO may be deposited on top of the substrate, and a surface anneal process may be used to cause the ITO to undergo a phase conversion from amorphous ITO to crystalline ITO. In the surface anneal process, energy is applied in such a way that most of the energy is absorbed by the layer including amorphous ITO, and not the substrate. 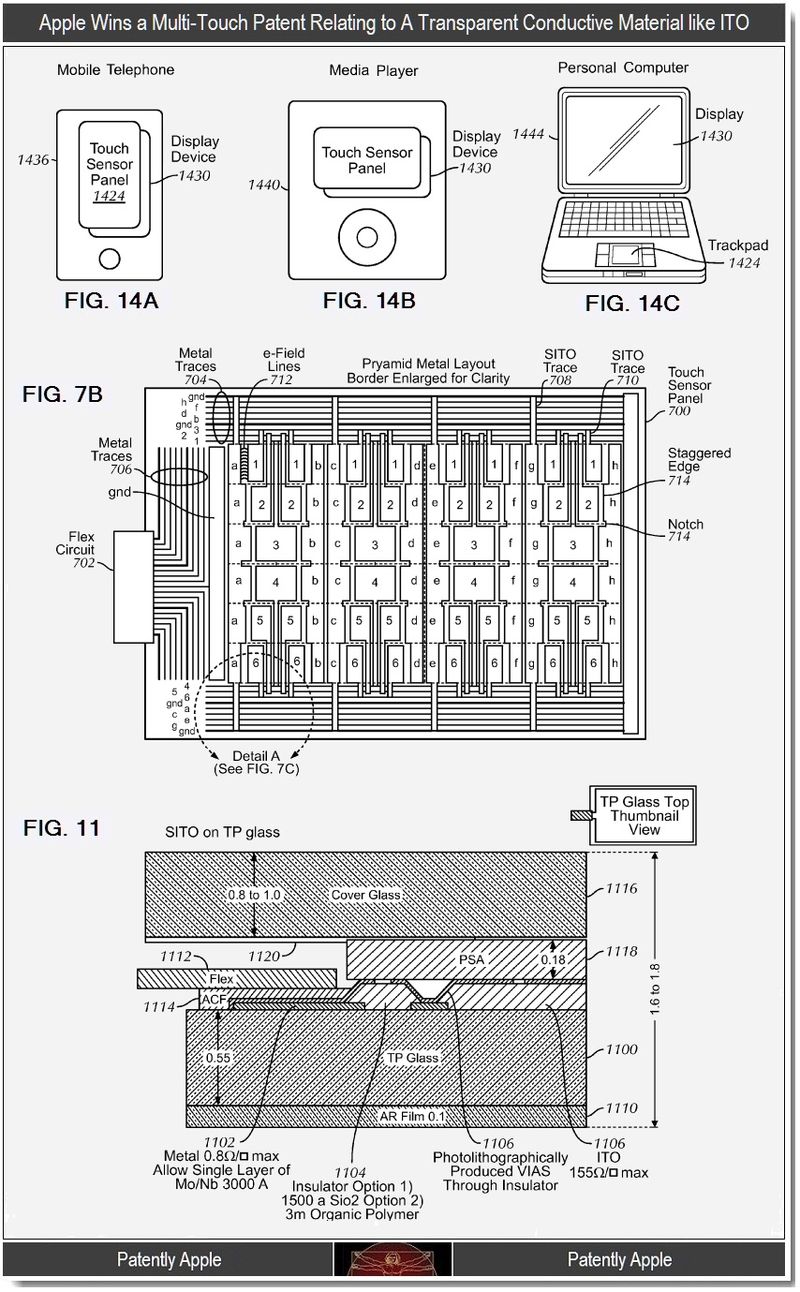 To review Apple's other 23 patent claims and invention detailing, see granted patent 8,049,862. Apple credits Lili Huang and John Zhong as the inventors of this patent which was originally filed in Q3 2008.

I'm sure everyone who reads this site knows that Steve Jobs said this when introducing MultiTouch technology in the original iPhone introduction years ago. And now, we can add another datum, which is that Steve Jobs said that he would be willing to spend Apple's entire cash reserve (then $40B) on lawsuits to prevent this technology from being used OR LICENSED by any other company.

Will Tim Cook give in? Or will Steve Job's directives rule, and give no quarter to Android?