The US Patent and Trademark Office officially published a series of 14 newly granted patents for Apple Inc. today. In our first report of the day we covered the three iPod design patents that Apple received. In our second report of the day we cover two additional granted patents that focus on Apple's Mini DisplayPort and a unique range of iPod docks that includes one for integrating an iPod into a MacBook and a spin off idea designed to turn an iPod into a personal transmitter system acting both as a limited range Walkie Talkie and means of allowing a central iPod within a group to act as a DJ system for those at closed events like a ski resort or other facility.

Apple has been granted a patent covering a wide range of iPod docking station variants that include a MacBook dock, a stereo dock (which Apple used in their now defunct Apple iPod Hi-Fi Boombox), a MacBook dock and even a personal transmitting station that was foreseen as working well at ski resorts. To review Apple's other 43 patent claims and invention detailing, see granted patent 8,050,714. Apple credits Anthony Fadell, Stephen Zadesky and John Filson as the inventors of this patent which was originally filed in Q4 2007.

Apple Wins a Patent for the Mini DisplayPort

Apple has won a patent for their Mini DisplayPort. The Mini DisplayPort delivers a pure digital connection to external displays. It gives you plug-and-play performance with the Apple LED Cinema Display and works with single-link DVI, dual-link DVI, and VGA displays with the appropriate adapters. In April 2010, Apple added support for audio out using Mini DisplayPort in their MacBook Pro product line. This added feature allows users to easily connect their Macbook Pros to their HDTVs using a cable adapting Mini DisplayPort to HDMI with full audio and video functionality. Mini DisplayPort is now being used by HP and Dell. 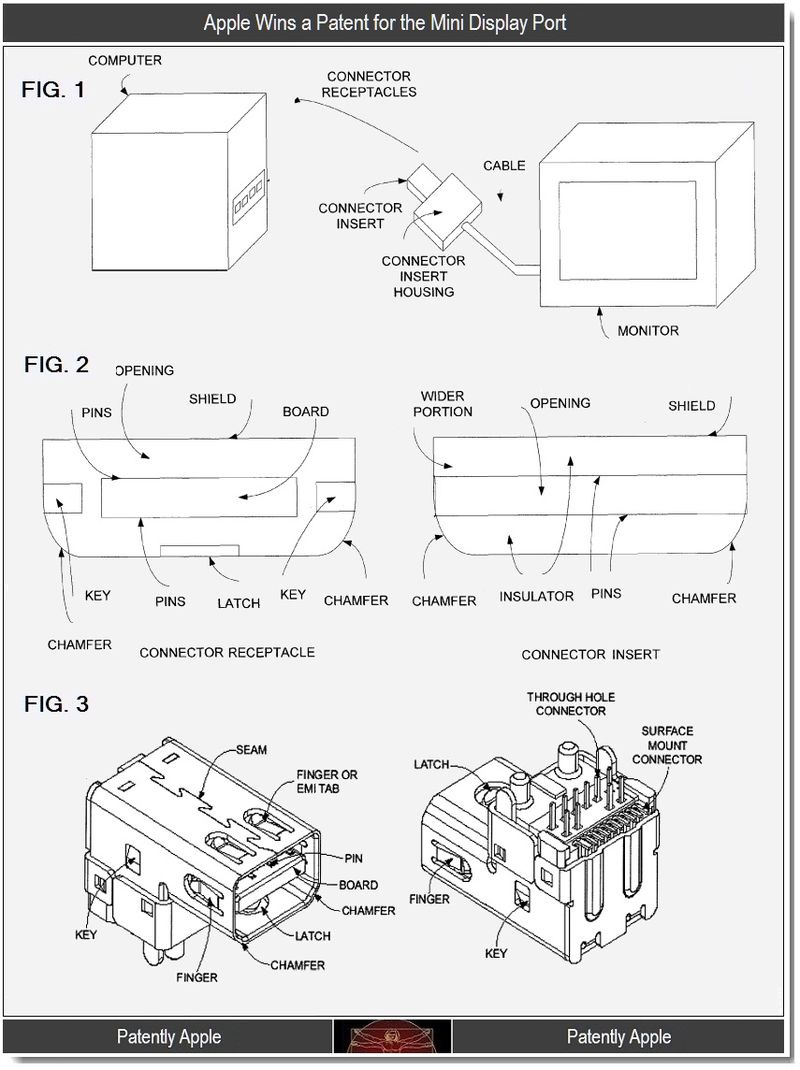