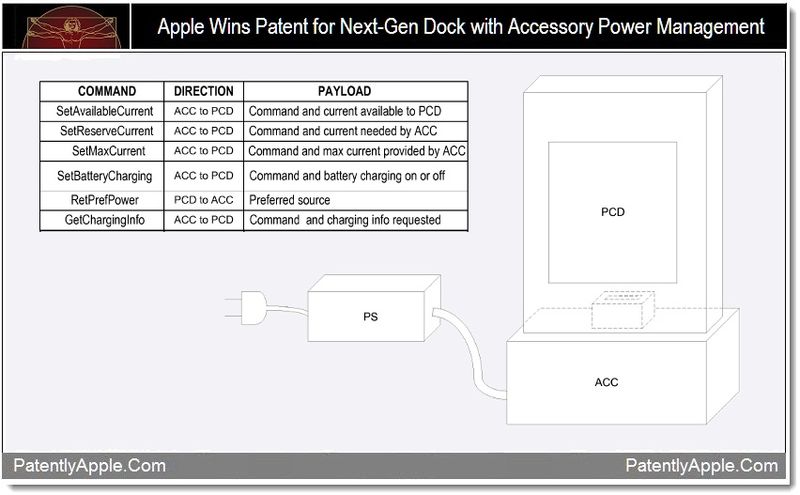 The US Patent and Trademark Office officially published a series of 17 newly granted patents for Apple Inc. today. In our second patent report of the day we focus on a possible next generation docking station from Apple that will include accessory power management. As portables get more powerful, Apple foresees the need for a dock that will be able to manage power more intelligently so that it could power-up larger and more powerful devices safely. As a side note, Apple's patent mysteriously states that the new dock will be able to power up a monitor. That could mean anything ranging from a portable presentation system to that of a TV. Time will tell what Apple has up their sleeve on that particular point; though I must confess that it sounds most inviting.

Apple's patent background begins with a discussion of device convergence. Apple states that smaller devices, such as smartphones, could now be used to perform functions that were previously limited to larger computing devices. These go beyond native functions, such as actually calling people, and include listening to music, watching movies, viewing documents, surfing the web, and reading email. Larger devices, such as netbooks, are slimming down to ultraportable size by jettisoning their optical drives and other functionality.

Thus, what is needed are methods, apparatus, and circuits for managing power among these portable computing devices and one or more accessories.

Apple's Solution In-Part for a Next Generation Docking Station

Apple's granted patent covers their invention of a next generation docking station that includes advanced methods, apparatus, and circuits for managing power among portable computing devices and one or more accessories. 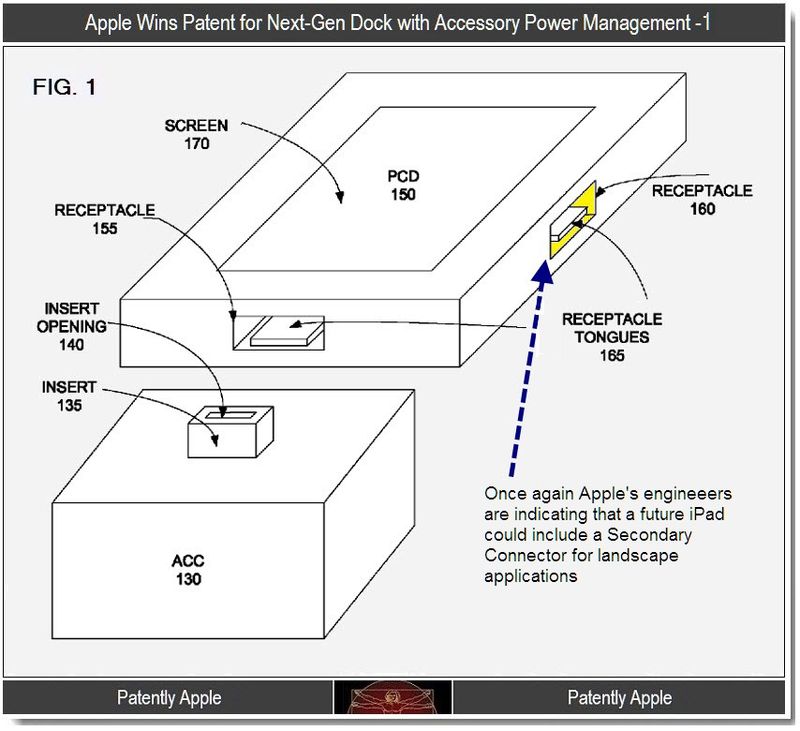 Apple's Patent FIG. 1 noted above includes portable computing device 150 and accessory 130. In this example, accessory 130 is a docking station, though in other examples, the accessory could actually be another type of device, such as radios, monitors, interactive displays, and others. In this example, the portable computing device is a tablet computer, though in other systems it may be other types of devices, such as a portable media player, cell phone, monitor, or other electronic device. Docking a monitor is interesting to note. Why would you need to dock a monitor? I wonder what is Apple thinking of here. 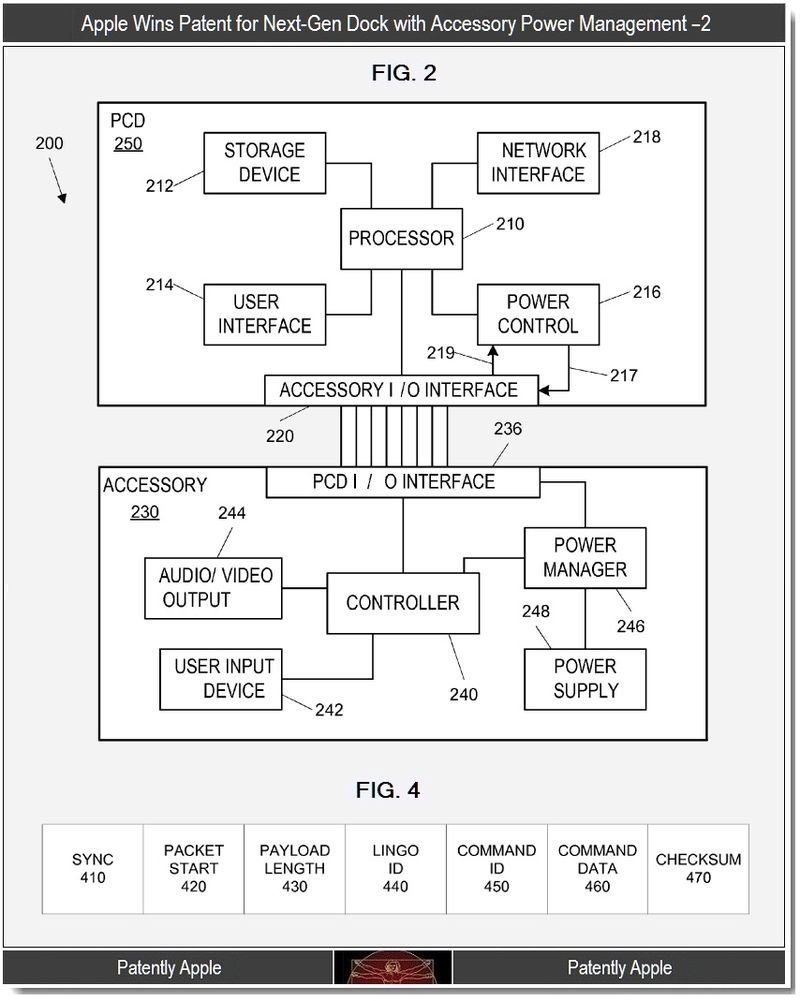 Apple's patent FIG. 2 noted above is a simplified block diagram of a system 200. Apple's patent FIG. 4 illustrates a packet format for conveying commands that may be employed by an embodiment of the present invention. The commands included in embodiments of the present invention are of two types, specifically, set and get commands. Set commands instruct a receiving device to set an internal value. Get commands request information from the receiving device. 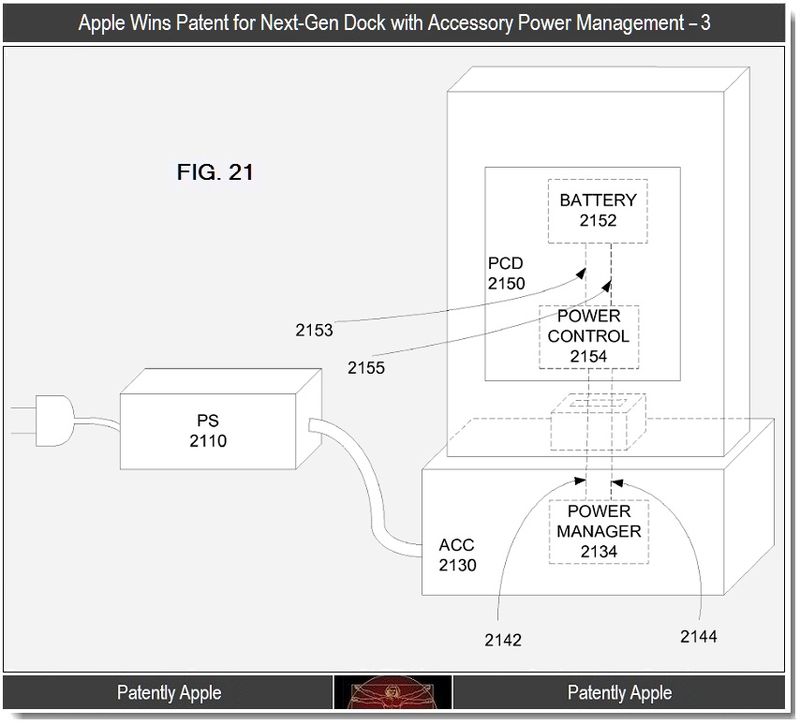 Apple's patent FIG. 8 noted below is a table listing commands employed by various embodiments of the present invention to manage power between an accessory and a portable computing device. 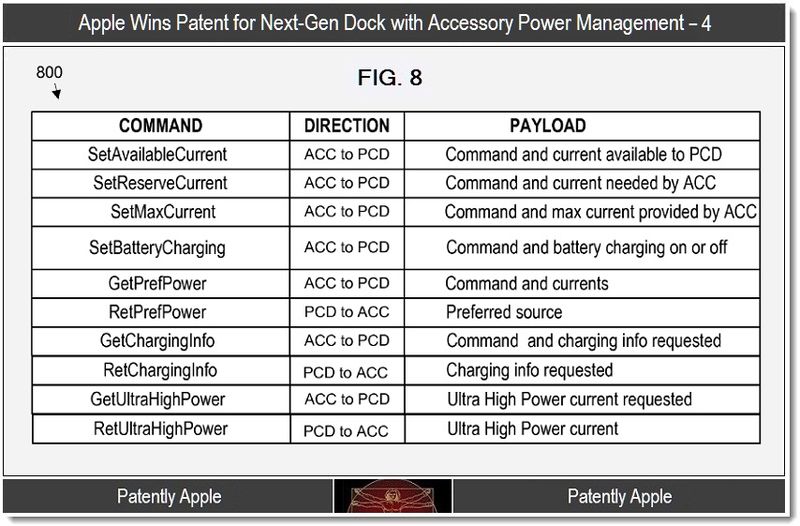 Apple credits Shailesh Rathi, Lawrence Bolton, John Ananny and Scott Krueger as the inventors of this patent which was originally filed in 2010.

While on the topic of docks, Apple was also granted another patent for their current styled docking stations. While their original filing dates go all the way back to 2005, with a series of continuation patents along the way, their last filing was made in January 2010.

It makes sense to consolidate power supplies to a single unit rather than one for MBP, another for iPad etc,.
It might also lead to a unified port like maglock for all devices.