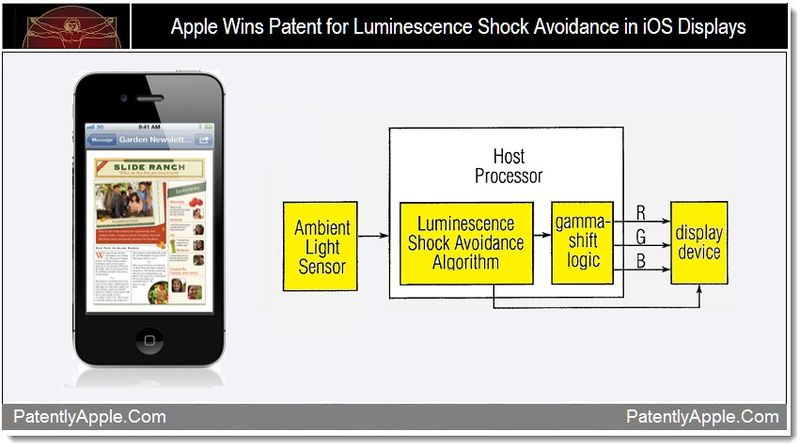 The US Patent and Trademark Office officially published a series of 17 newly granted patents for Apple Inc. today. This morning's first granted patent report focuses entirely on a very interesting invention that relates to display devices, and more particularly, to avoiding luminescence shock (temporary vision impairment) when a display device is activated in a dark environment. When Steve Jobs introduced the iPhone back in 2007, he stated that the iPhone was protected by more than 200 patents. Today, we get to review one of the originating patents that he referred to.

The convenience of today's handheld portable devices combined with their ever-increasing multi-media functionality has made such devices seemingly ubiquitous, with users carrying them everywhere, in purses or clipped to belts. To a dedicated user, these personal devices could be as indispensable as a wallet. To that end, users may place these personal devices within arms-reach wherever they go, including vehicles, movie theaters, and the like.

For example, the display of a mobile telephone may be dimmed or go dark altogether until a call is received, or the screen of a PDA may go blank until the user activates a function or a communication such as an e-mail or text message is received. However, if one of these personal devices is in a sleep mode in a dark environment and the display is suddenly illuminated due to a received call or other communication, a nearby user who happens to be looking at the device or is instinctively drawn to looking at the display when it illuminates could suffer temporary vision impairment. Because the user's pupils have opened up in the dark environment, the sudden flash of light could cause short-term blindness or at least impaired vision. This temporary impaired vision could range from a mere annoyance to a life-threatening situation if the user is driving a motor vehicle.

The algorithm receives the state of the display (e.g. on or in standby mode), and could optionally receive an ambient lighting value from an ambient light sensor and a user-selectable manual brightness adjustment setting to determine whether luminescence shock avoidance should even be triggered, and if it is triggered, how much should the brightness level of the display be limited.

If the device is in a car being driven at night, for example, then when a call or other triggering activity is detected, the display brightness level may instantly jump from zero to some predetermined level. Because the user's eyes are likely to be already adjusted to the darkness of the car, the sudden change in display brightness level from could cause luminescence shock and temporary vision impairment, which can be dangerous to the operator of the car, especially if the driver takes a glance at the newly illuminated display. 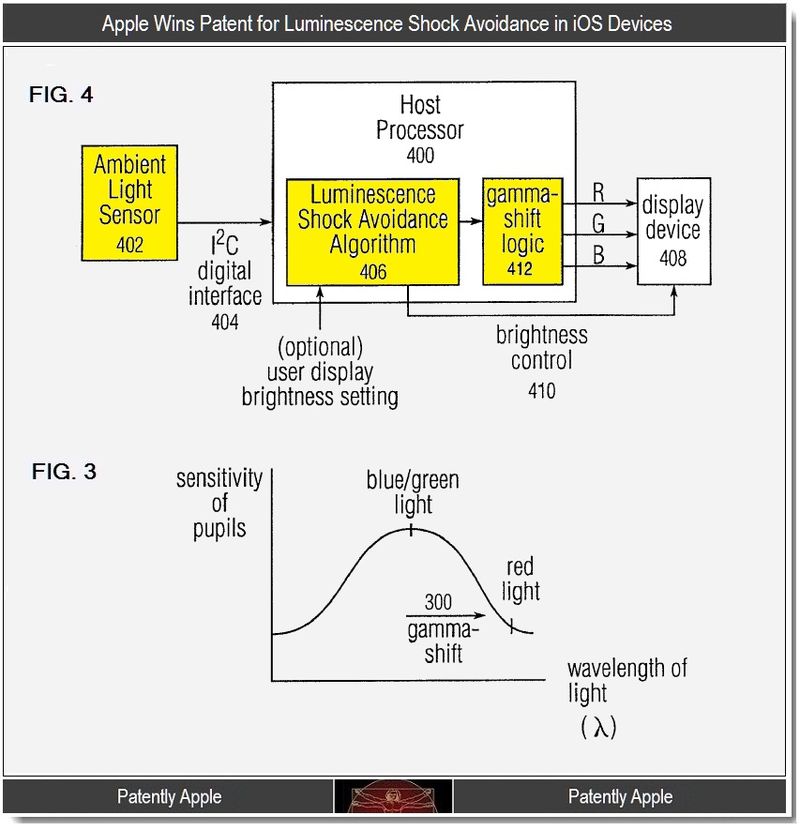 Apple's patent FIG. 4 is a more detailed view of the host processor, ambient light sensor and display device shown in FIG. 1; Patent FIG. 3 is a plot of wavelength vs. pupil sensitivity, showing that the pupils are more sensitive to blue/green light as compared to red light to illustrate the purpose of gamma-shifting according to one embodiment of this invention.

Apple credits Kai Achim Pantfoerder as the sole inventor of this patent which was originally filed in Q2 2007, prior to the iPhone's official launch.