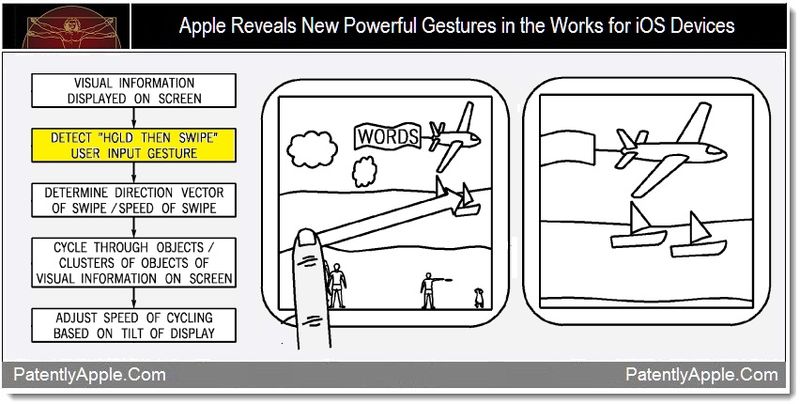 On November 10, 2011, the US Patent & Trademark Office published a patent application from Apple that reveals a series of new gestures that will provide users with a number of advantages. It will allow users to view clusters of photos as well as greater detail of photos, maps and/or documents with greater ease and speed. Two of the new gestures are currently dubbed "Hold then Swipe" and "Swipe then Hold." And lastly, we end today's report by sharing Steve Jobs' thoughts on Intellectual Property, according to the Book of Jobs.

Introducing: The "Swipe then Hold" Gesture

Apple states that rather than simply enabling manual zooming and panning to view details of such visual information, the electronic device may display certain of the objects present in the visual information in greater detail automatically. In one example, a user may perform a "swipe then hold" touch input gesture, leaving a finger on the display screen of the electronic device. The electronic device then may pan and zoom onto any objects along a direction vector of the user's swipe gesture or, more generally, along a directional path associated with the user's swipe gesture. The user may vary the speed and/or direction of such cycling by moving the finger to the left or to the right and/or by tilting the orientation of the display screen.

Specifically, patent FIG. 8 below represents a "swipe then hold" touch input gesture 100, which may correspond to block 84 of the flowchart 80 of FIG. 7 and may take place while the display is displaying certain visual information, such as the digital photo 50. 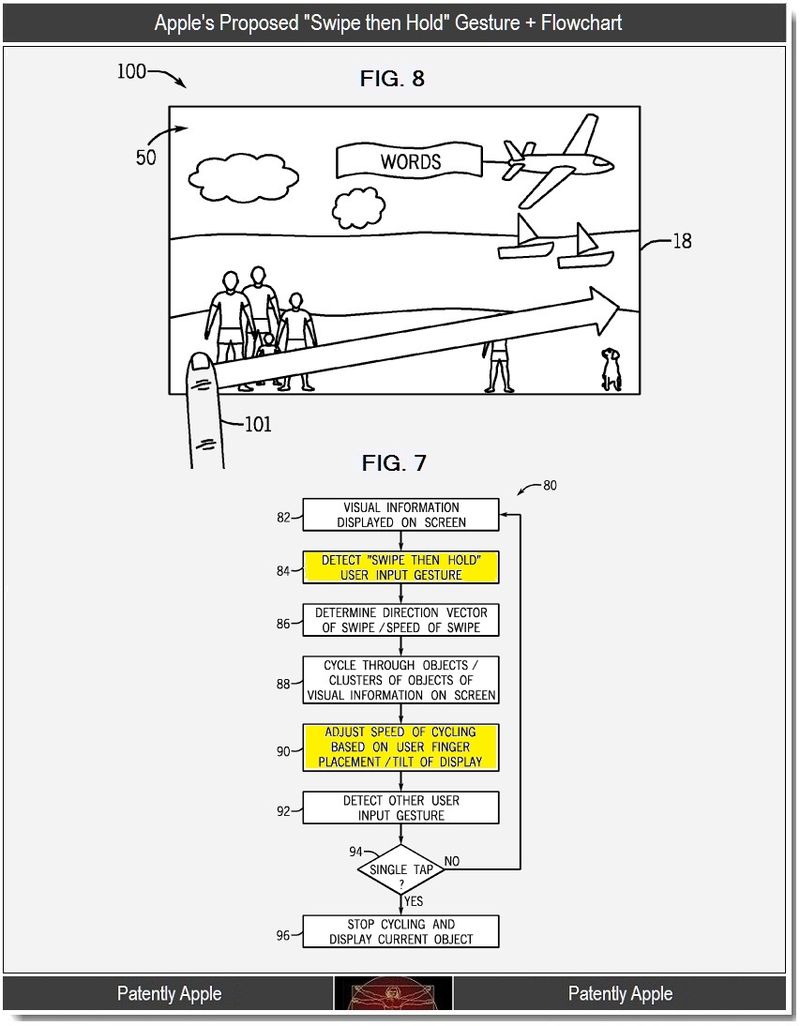 Introducing: The "Hold then Swipe" Gesture

In another embodiment, which may be particularly suitable for a very small display screen (e.g. a display screen of approximately less than 3 square inches), a user may initiate the detailed display of certain objects with a "hold then swipe" touch input gesture. Such a gesture may end when the user lifts a finger off of the electronic display, permitting full view of the electronic display. Thereafter, the electronic device may cycle through the objects found along a directional path defined by the swipe.

For example, when a user selects a particular person's face in an image and performs the touch input gesture, the electronic device may begin to automatically cycle through other images that also contain the face of the identified person. 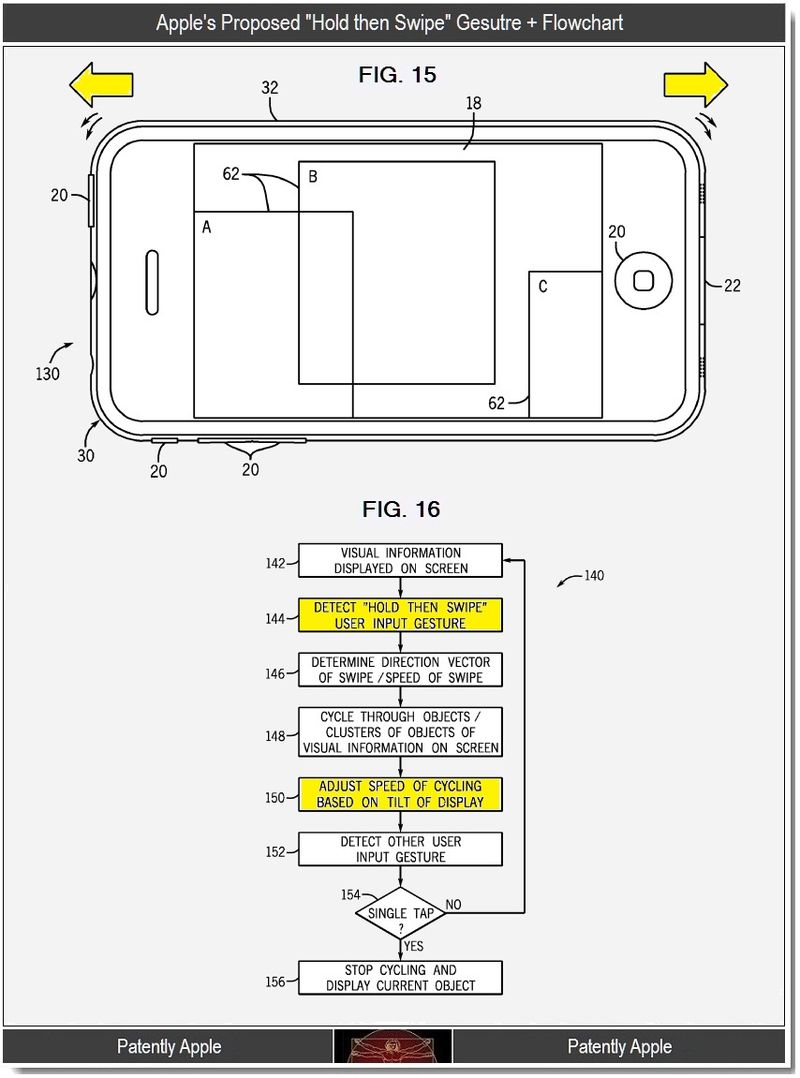 The Accelerometer will provide the user with New Device Controls 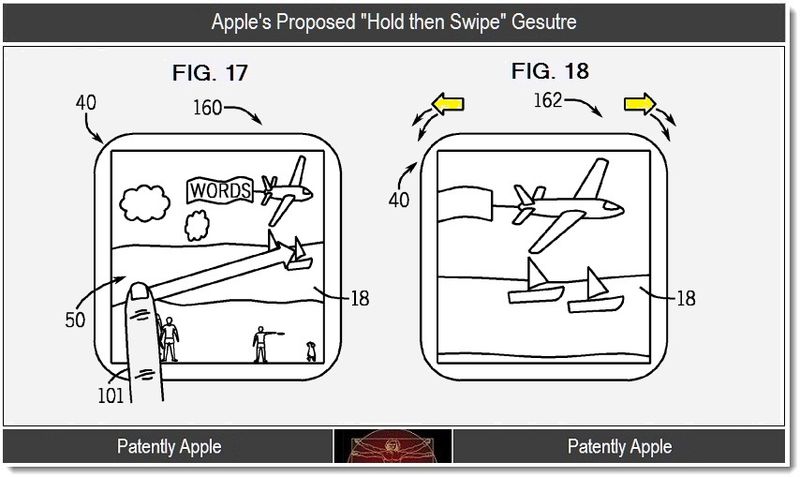 Alternative patent figures repeat with differing scenarios of the new gestures of allowing a user the ability to rifle through a cluster of photos, documents or maps with ease.

In another application, this could eventually play a minor role within the context of Apple's latest acquisition of 3C Technologies. A user may be able to point to a particular landmark and use one of Apple's new gestures to call up all or a cluster of photorealistic photos of that same building that they have on hand. That would be very handy for photographers who want to view a large variety of photos from a given shoot or from inventory on a given topic to pop up quickly so that they could choose a photo for a project, especially a rush project.

The new gestures sound very promising though I think it'll take a classic Apple event demo to really get the simplicity of what Apple is trying to convey here. I like the fact that you'll be able to rifle through documents or photos quicker and with fewer steps. This again is a process trait that Steve Jobs pushed for constantly at Apple: To simplify processes in fewer steps. In the Steve Jobs biography by Walter Isaacson, we learned of how he pushed the iTunes team to simplify the steps on an iPod to three moves at most per task. We see that this process philosophy in action in this patent.

"From the earliest days at Apple, I realized that we thrived when we create intellectual property. If people copied or stole our software, we'd be out of business. If it weren't protected, there'd be no incentive for us to make software or protect designs. If Protection of intellectual property begins to disappear, creative companies will disappear or never get started. But there's a simpler reason: It's wrong to steal. It hurts other people. And it hurts your own character."

Patent 20110273464: Title: Framework for Graphics Animation and Compositing Operations. Is Apple upgrading Cocoa? Apple's latest patent points to NSView which is a part of Cocoa's Objective-C API. It's an abstract class that defines basic drawing, event-handling, and printing architecture of applications. This current patent application, which was only filed four months ago, is based on a 2006 patent. But it's not a continuation patent. So while it borrows from the 2006 divisional patent, it's considered new. Only an Apple developer could tell us if this is really new or a refresher of the original framework. Here's a temporary link to the patent that's good for about 48 hours.

Patent 20110276692: Title: Server Load Balancing using Geodata: Apple's patent relates to serving geodata based on location of a requesting device. More specifically, the technology efficiently services requests for geodata, e.g., map data, by directing requests to a server that stores a shard of an entire database of geodata. A request for geodata includes an unencrypted header having a location of a device making the request for geodata. The present technology relates the location to a shard storing data relevant to the location.

Patent 20110276615: Title: Content Delivery based on user Terminal Events: Apple's invention is about advertising. The technology provides systems and methods for selecting content, such as advertisements, to present to users based on user interactions that fail to generate a conversion.

Don't you just love to see a head explode. Gizmodo's rant is so off the wall stupid that you have to worry about the guy. But that crazy photo with the 10 hand beast should win hands down for the creepiest, craziest, funiest photo ever.

When I look at Figure 18, it's so simple what Apple is proposing that's it's not even funny. Critics trying to complicate this should have their heads examined.

Thanks for your asinine interpretation of a blip in time. I think that intelligent people understand the difference between protectable Intellectual Property and the notion that creators of art or designers of tech are always borrowing one idea to spin off another like a movie "concept." When Apple created the iPod, there were MP3 players on the market. Apple built one that had a clickwheel, played playlists created on iTunes and allowed you to buy music at the best online music store in the world to fill your iPod. Did Apple's IP go far beyond the original idea. Yes, of course. Is it stealing? Not a chance in hell.

So if it makes your simpleton mind feel that Steve Jobs is a hypocrite, then be stupid. You're just an Androider. A Google robot who can't think beyond their nose. Ha!

To quote Jobs: "It's wrong to steal. It hurts other people. And it hurts your own character."

In other words, Jobs and Apple are in the business of knowingly stealing, hurting people, and denigrating their character. Jobs said so himself!