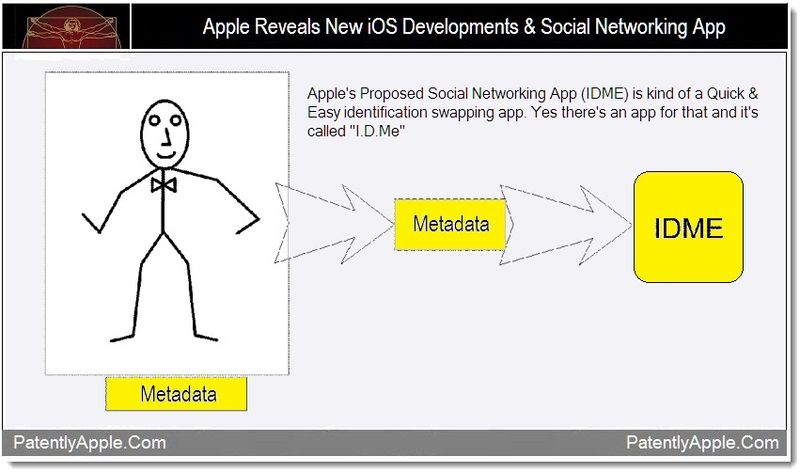 On America's Thanksgiving 2011, the US Patent & Trademark Office published a patent application from Apple that reveals an all-new concept for managing data on future versions of iOS devices. Apple introduces us to the "Persistent Overlay" which is going to be appreciated for those who need to be productive on their iOS devices. It's something like a personal multitasking bar system that will hold photos, tunes and documents that you need quick access to during the day. The patent also reveals that a new social networking app is in the works and that you'll have the ability to use your Magic Mouse or Trackpad with your iPad when docked.

Although small in size, a device like an iPad (or iPhone) could possess prodigious processing resources capable of providing vast amounts of information that for the most part are presented in a display having limited displayable area.

It is this dichotomy between the potential large amount of information made available by the processing resources of the small form factor electronic device and the comparatively small amount of displayable area on which to present this information that could lead to situations where both the display and a user are overwhelmed by the sheer amount of information.

This is particularly salient due to the fact that the display by its limited size could only present limited portions of the available information at a time requiring the user to resort to ad hoc and mostly inefficient techniques for managing the visual information.

Apple's noted summary isn't easily understood as they're presenting an all-new concept. It's like reading about the complexities of multi-touch in 2006 prior to the iPhone's arrival in 2007 when the patent verbiage leaped to life. Something's are just a little difficult to get your head around with words alone. So in this case we'll skip the summary and jump right into the graphics to make this a little more palatable.

Apple's solution relates to what they describe as a "Persistent Overlay." As you could clearly see in Apple's patent FIG. 2 below, a user will be able to grab a headline of a webpage and/or tear off a portion of a webpage and sit in a new area at the top the interface. In this new area, you'll be able to place such things as a photo, a new or favorite iTune or some other form of information like a document.

Apple's patent states that "the persistent overlay could take many forms such as textual, graphical, and video data. The persistent overlay could also be related to audio data (such as a media item encoded as an MP3 file). For example, an icon or other appropriate image could be used to represent a music item encoded as an MP3 file. In this way, the persistently displayed icon associated with the music item could remain viewable from one displayed page to another." 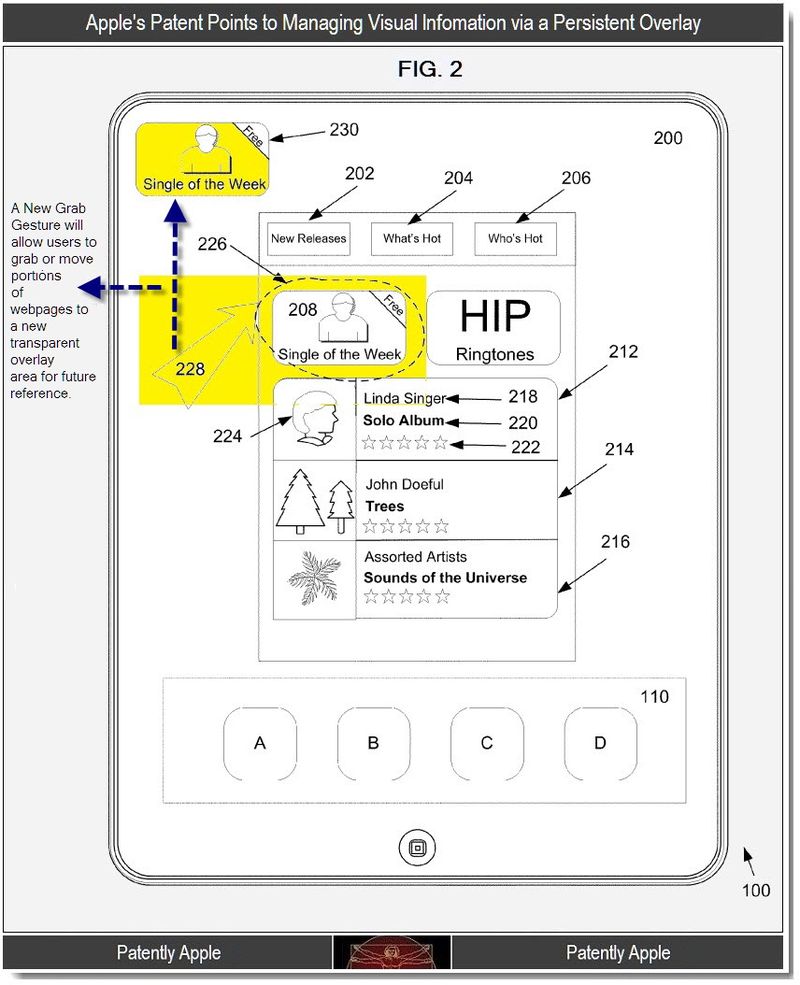 In the context of the described embodiments, when a user wishes to retain at least some of the visual information presented in page 200 (noted above) for subsequent processing, the user could, for example, select portion 226 of the page that could include at least visual data corresponding to "Single of the Week" icon 208. The select portion could be selected in any number of ways. For example, a selection tool (228) that could take the form of an arrow, pencil, pointer, or other representation of a pointing and/or grabbing device that could be used to delineate a portion of the page for rendering as persistent overlay.

Using the Persistent Overlay in Context with Augmenting Data 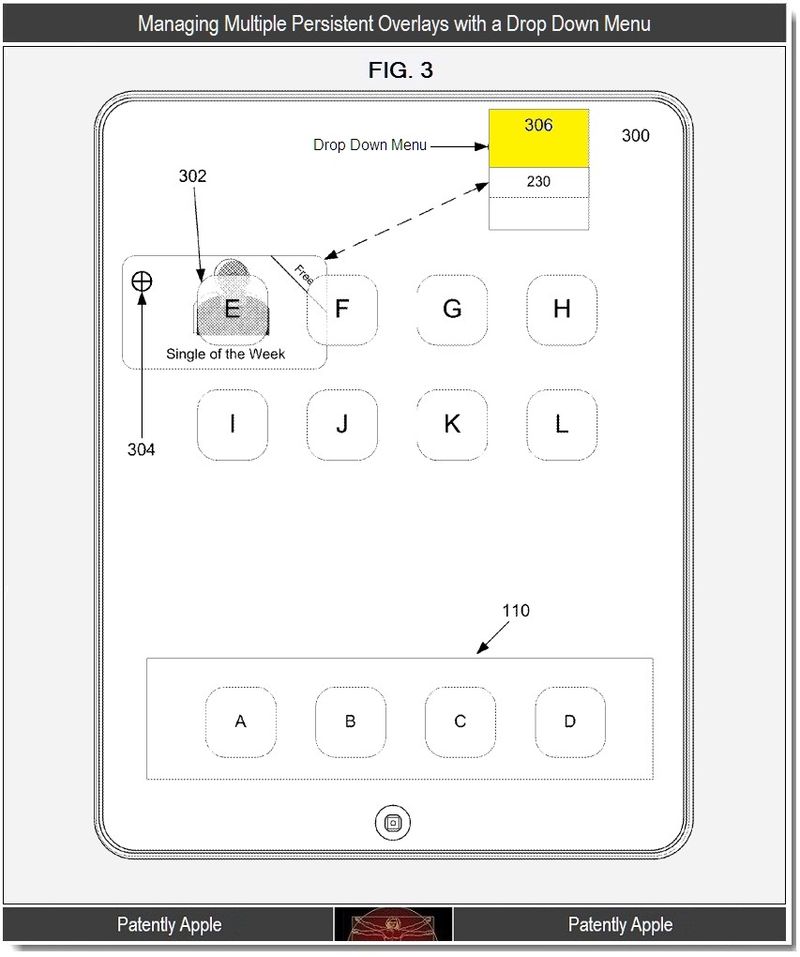 Apple's patent FIG. 3 as shown above illustrates an iPad presenting a page (300) in the form of a graphical user interface along the lines of GUI 108 (which is an image of the iPad's Homepage, not shown). This is the key: What's being described here isn't the iPad's home page, but rather an overlay page along-the-line of a home page.

In some descriptions, it sounds like it could also work much like the current multitasking bar positioned at the bottom of an iOS device, except instead of being for "apps," it would be for personal items such as a tune, a photo, a document, or a portion of a web page to review at a later time so that you could continue in whatever you were doing at the time (surfing, reading a book, reviewing a document or looking at photos).

With the combination of using "tabs" in iOS 5 Safari along with this future persistent overlay tool, you'll be better able to capture and organize data much better on your iPad. Deleting these temporary persistent overlays will be as easy as deleting an app on your iOS device today.

Where it gets interesting is that you'll be able to set up multiple persistent layers. On this feature, Apple states that "In some cases, an indication of persistent overlay 230 could be maintained by clipboard 306. In the described embodiment, the clipboard could provide an efficient mechanism for tracking or otherwise memorializing any number of persistent overlays thereby preserving available displayable area and maintaining a neat and orderly appearance for page 300. The clipboard could take on the form of any visually efficient mechanism such as a drop down menu. 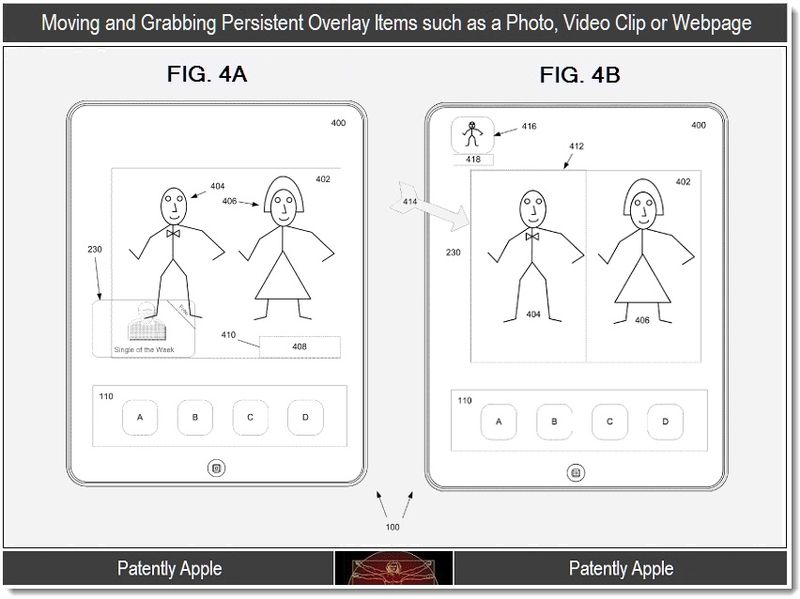 Up until now, getting your Magic Mouse or Magic Trackpad to work with your iPad while docked required the use of a Jailbreak app solution. Apple's patent now states that input devices used with an iPad could include "a touch sensitive input layer as part of the display or a mouse separate from the electronic device that could include a touch sensitive surface used to detect a user touch event." So, one of the grab tools will be available via your Magic Mouse or Magic Trackpad. This will help some folks working with Apple's iWork suit of apps like keynote and Pages so that they could work more fluidly and naturally. For the enterprise this will be much appreciated.

In Apple's patent FIG. 5 shown below we're introduced to a new identification centric application that's simply identified as "IDME." To quickly understand the meaning of this acronym, simply parse it differently in your head so as to read it as "I.D.Me" - and now it all makes sense. 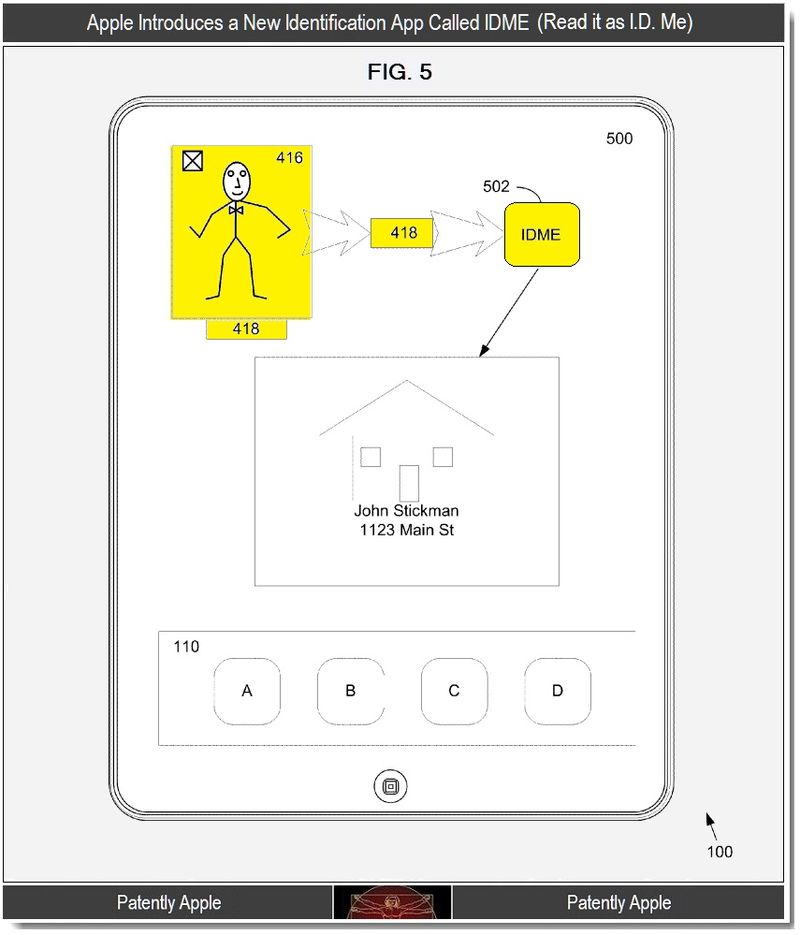 The new IDME app uses metadata associated with a particular image (which in this case is that of individual 404) to establish at least a tentative identity and in some cases a residence address and/or phone number automatically. In this example, the user could provide input data to application IDME by dragging persistent overlay 416 (in this case a picture) to application icon 502. In this way, metadata 418 (or at least portions of the metadata) could be provided as input to application IDME.

Application IDME could use the metadata to resolve the identity (or at least suggest an identity) of individual 404 and if possible information such as a residence address and/or phone number. Of course, it is anticipated that this information is only made available by individual 404 (noted in the photo) with the expectation that it would be used for purposes of name and address identification. This is particularly useful in social networking situations where people could meet other people for only a moment and wish to make further contact.

Of course, in order for this to work fluidly in social settings, the devices will have to be NFC-ready so that exchanging photos and other information could be done naturally and speedily. That's not menitoned in the patent.