A news report that broke in July stated that LG thought that OLED displays weren't suitable for smartphones and tablets. Some debated that claim and now we see that Apple does as well. In a new patent application published by the US Patent and Trademark Office this morning, we discover that Apple has found a way to make an OLED based display work better with applications such as word processing and email for corporate users while gaining a power savings of up to 30%. Apple has been on a tear this year working on next generation hybrid displays to power their future iOS devices. In April, we learned that Apple had devised a smart hybrid e-Paper/Video iOS display and in July we discovered that Apple was working on smart transparent displays that could uniquely support augmented reality based applications. It's evident that Apple is placing a tremendous amount of research and finances behind display technology in order to stay one step ahead of the competition.

The Pros and Cons of Current OLED based Displays

Organic light emitting diodes (OLEDs) are solid-state semiconductor devices that convert electrical energy into light. Generally, OLEDs are fabricated by disposing one or more layers of organic thin films between two conductors or electrodes. When electrical current is applied to the electrodes, light is emitted from the organic layers.

On the positive side of the equation, OLED technology may be used to fabricate ultra-thin displays that could generally operate at lower voltages than traditional display technologies, such as liquid crystal display (LCD) technologies in which light is separately generated and the color of the light modulated by an LCD panel placed between the light and the viewer. In addition, an OLED display may provide better contrast ratios, frame rate, color and/or power efficiency than a comparable LCD display.

According to Apple, the relative power inefficiency in displaying white spaces using an OLED display may be particularly problematic in certain contexts. For example, certain applications, such as word processing, spreadsheet design and use, database design and use, e-mail, and other business or productivity applications, typically utilize dark or black alphanumeric characters on a white background, such as to simulate writing or printing on a sheet of paper. As a result, these applications may cause the display of large expanses of white background with relatively little area devoted to the non-white alphanumeric characters. Such applications, therefore, may make the use of traditional OLED displays unsuitable or undesirably power intensive for battery powered and/or portable electronic devices, such as handheld devices.

In one embodiment, the disclosed display includes various layers including a transparent light emissive display panel (e.g., an OLED panel) and a solid (e.g., white) or printed background layer, such as a white transflective sheet. In addition, the display includes an opacity switchable layer, disposed between the transparent light emitting panel and the background layer. The switchable layer may be switched, in whole or in part, from an opaque or semi-opaque state to a transparent or semi-transparent state.

In one implementation, an OLED display employing a switchable layer and solid background, as discussed herein, may be 30% more power efficient than a comparably sized LCD screen, while still providing superior frame rates and/or contrast. 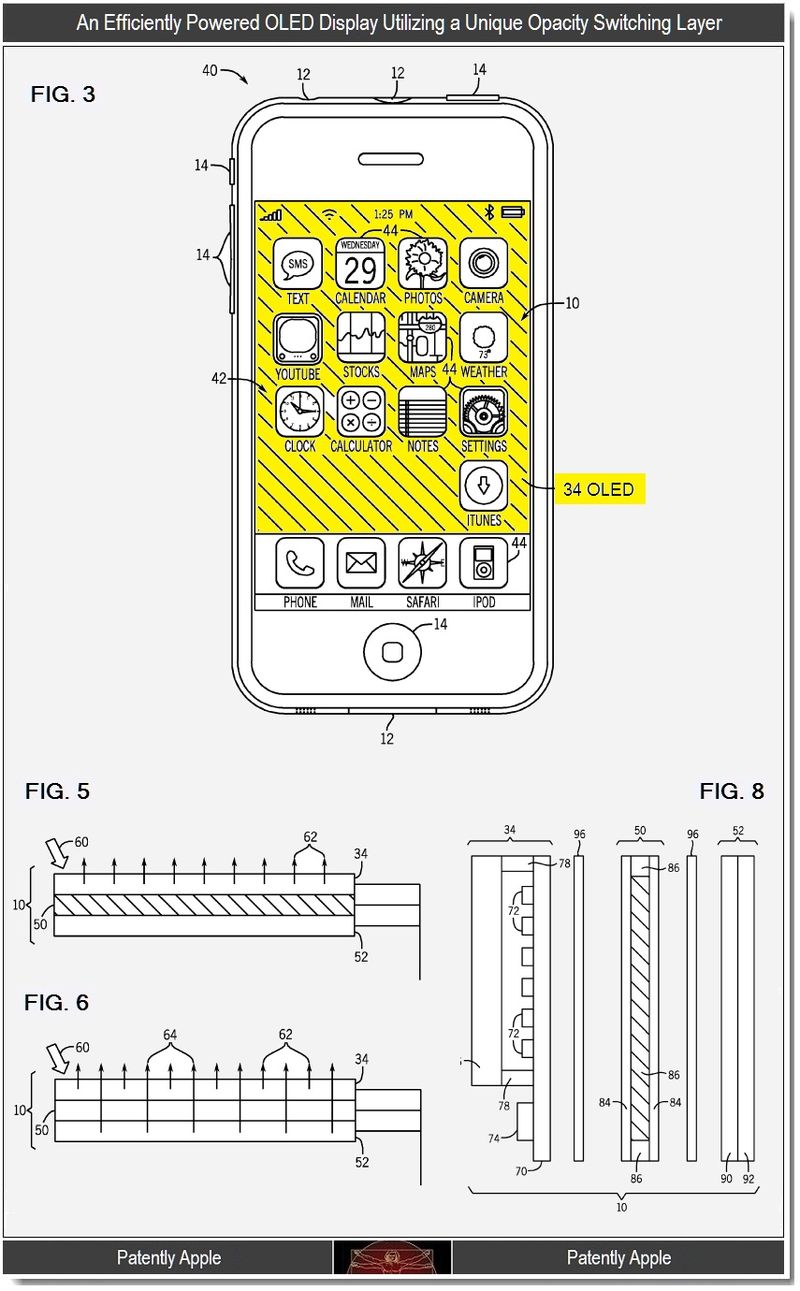 As depicted in Apple's patent FIG. 8, the various layers of the display may be joined or adhered by various intervening layers. For example, in the depicted embodiment, the OLED panel, the switchable layer and the background layer may be adhered or joined using respective layers of an optically clear adhesive (OCA). In one implementation, the layers of OCA may be between about 0.05 mm and 0.15 mm in thickness.

A Side Benefit: Apple's Backside Logo on the iPhone could be illuminated

I love the light up apple logo part.