Apple introduces us to the Virtual SIM Card 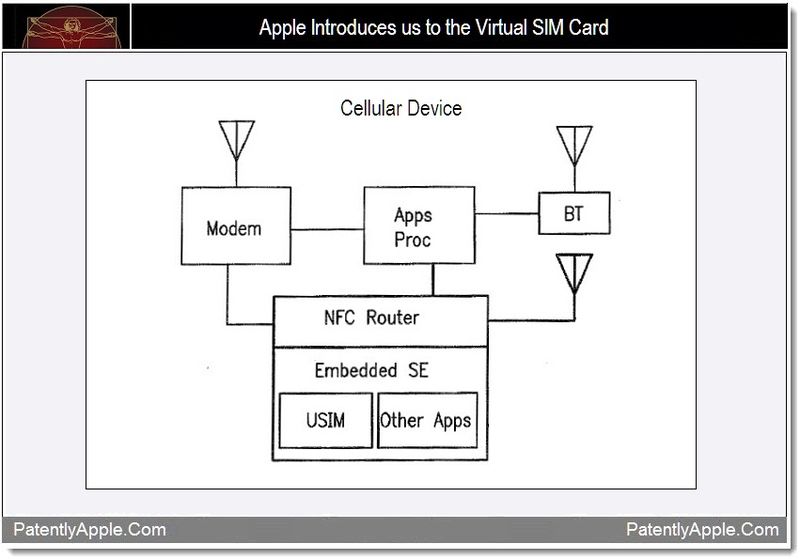 On November 3, 2011, the US Patent & Trademark Office published a patent application from Apple that reveals that they're working on a possible future iPhone that will operate using a Virtual SIM Card. Apple states that it would be desirable to be able to provide improved ways in which to provide users with the ability to purchase and use wireless network services without the need of a SIM Card. According to Apple, a secondary benefit of switching to a Virtual SIM Card is that'll improve security while allowing Jony Ive and his team to do what they do best: Design an ever thinner, astoundingly beautiful, next generation iPhone. Report Updated at 2:40 MST

Wireless systems are used to provide, inter alia, voice and data services to user equipment such as cellular telephones and computers. Conventionally, user equipment is provided with a Subscriber Identity Module (SIM) card. The SIM card includes security information such as private key information that could be used in authenticating user equipment to a cellular network.

It may not always be desirable to require the use of SIM cards. For example, the need to include a SIM card slot in user devices tends to make the devices bulky and add cost. It also necessitates management of SIM card inventories and distribution by the manufacturer or service provider. A user might also want to purchase wireless services even when the user is not able to easily obtain a SIM card. It would therefore be desirable to be able to provide improved ways in which to provide users with the ability to purchase and use wireless network services.

Apple's solution is very complex and unless you're grounded in this particular field you're going to get lost. However, while the patent discusses the use of Universal Subscriber Identity Module (USIM)) cards, the real discovery here is that Apple is considering a model of iPhone that may use a next generation Virtual SIM card that includes an NFC Router and tamper-proof security. It's only in this mode that Apple's background description of creating a thinner device makes any sense.

Apple introduces the use of a Virtual SIM

In Apple's patent FIGS. 5a and 5b shown below we see two exemplary embodiments of a hardware architecture (502, 504) for a "virtual" Subscriber Identity Modules (SIMs) according to the invention. Unlike prior art solutions, the exemplary embodiments of FIGS. 5a and 5b store a USIM (506) within an embedded Secure Element (SE) (508), which isn't a removable card. The first illustrated embodiment (502) of the present invention (FIG. 5a) additionally includes a Near Field Communication (NFC) router (510). 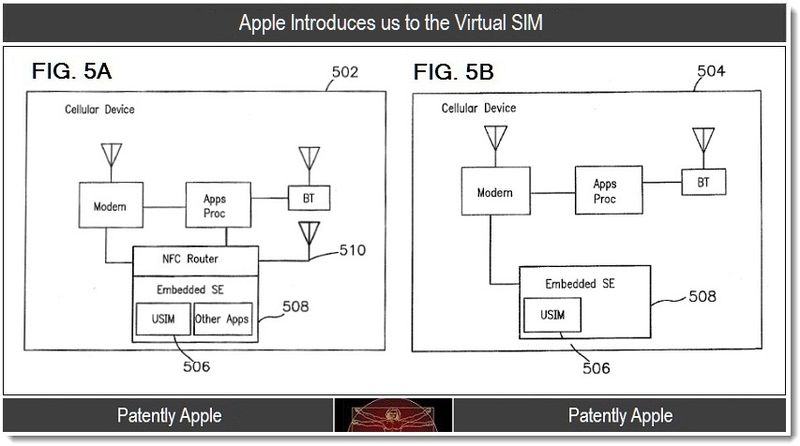 Legacy Architecture for Carriers Resistant to Upgrading their Existing Networks

Alternatively Apple's patent FIG. 6 shown below illustrates the first embodiment 502 of FIG. 5a, in conjunction with a SIM accessory device. 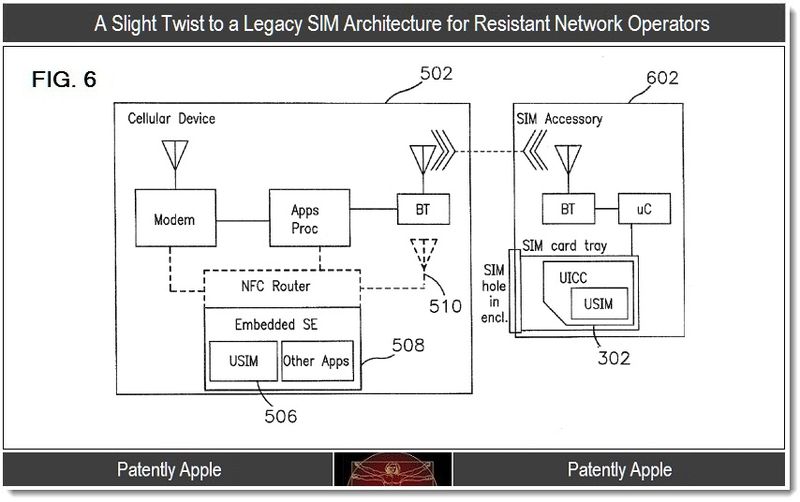 As shown above, the SIM accessory device enables inter alia, transitional embodiments, and support for legacy architectures. Legacy embodiments may find particular value when adopted by frequent SIM-card "swappers", and/or carriers that are slow, or resistant to upgrading their existing networks. As shown in patent FIG. 6, the Bluetooth SIM Access Profile (SAP) provides the required functions (e.g., AKA protocol) normally executed by a physical SIM card inserted within the modem.

Updated 2:40PM MST: It should be noted that back in late 2010 The Financial Times reported that "some of Europe’s leading mobile operators are warning that they could take punitive action against Apple if it introduces a technological innovation on its iPhone. Of course the patent covers more than just smartphones and that has to be pointed out.

Under Apple's Patent Ponit # 59 covering "Exexmplary Embodiments," Apple lists the following devices that may use the virtual SIM Card in the future: "The user equipment may be, for example, a cellular telephone or smartphone, a table-top computer, laptop computer, or other suitable computing equipment. If properly authorized, the user equipment may communicate with the network service provider over the wireless link."

It's inteteresting to note Apple's choice of words for "Table-top" computer in Patent Point # 59 instead of the traditional "desktop." Could it be that Apple is thinking about a pure iCloud Network Computer? Hmm, I wonder. Suffice to say that the iPad could be another prime target for the virtual SIM as well. Time will tell.

While we're on the topic of telecommunications, it should be noted that a published patent application from Apple titled "Methods and Apparatus for Preserving Battery Resources in a Mobile Communications Device," surfaced this morning. Like all smartphone OEMs, Apple is always trying to improve battery life. It's not revolutionary, but it's a way to squeeze out a little more juice for your iOS devices.

If this topic interests you, then check out patent application 20110269463. In a nutshell, Apple's invention generally relates to radio resource control between User Equipment (UE) or other wireless or mobile device and a wireless network, and in particular to transitioning between states and modes of operation in a UE in communication with a wireless network such as for example, a Universal Mobile Telecommunication System. 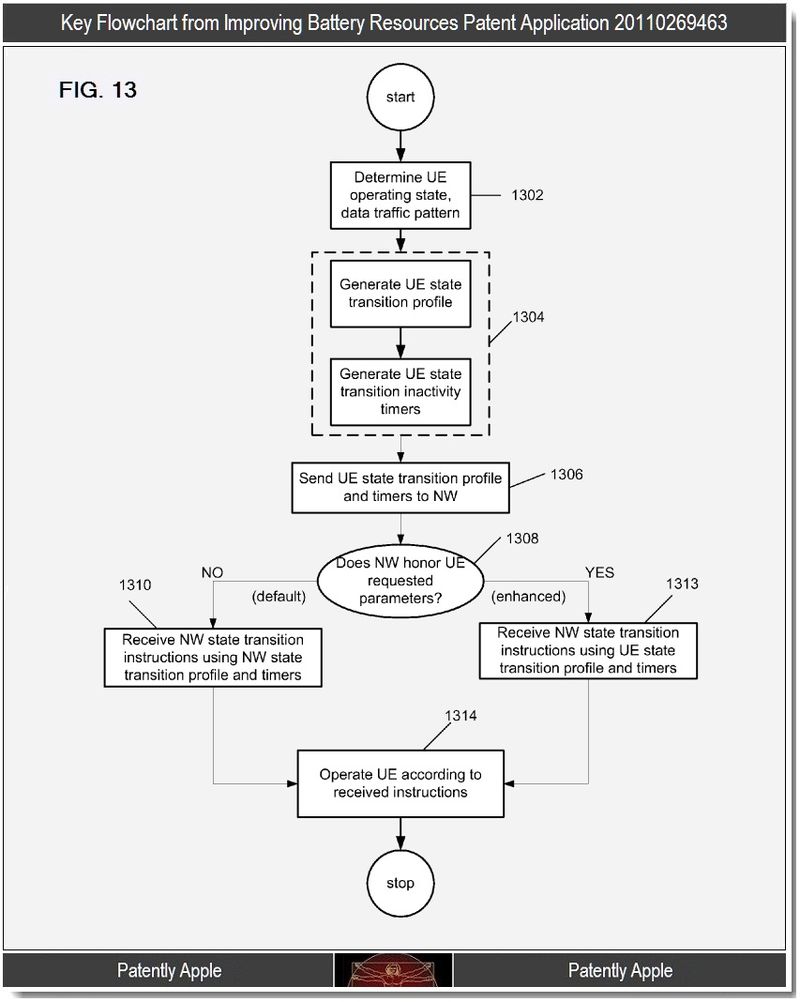 For more details, here's a temporary link to Apple's patent application, which is good for about 48 hours.

The last patent application of the day that may be of interest to some is one titled "Systems and Methods for Hot Plug GPU Power Control." See patent 20110267359 for details. Here's a temporary link that's only good for about 48 hours.

Some have said that the SIM card doesn't take up that much space. True, but the tray does, and removing it would help get the design slimmer.

It's also a point of control for Apple which Jobs was a big fan of.