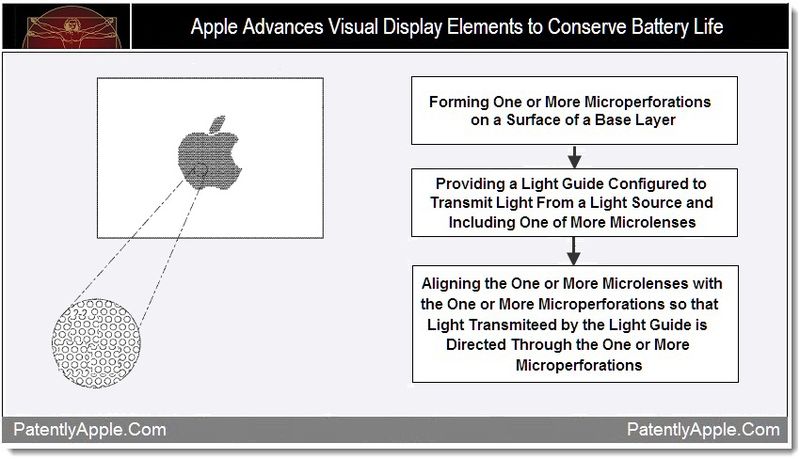 On November 17, 2011, the US Patent & Trademark Office published a patent application from Apple that technically reveals advancements to visual display elements. The new system uses a combination of a light guide system along with microperforations and microlenses to provide high level alignment on at least one axis. Commercially speaking, the new system could advance the way that Apple creates their backlit logo on MacBooks so as to conserve power and take up less space. Interestingly, Apple's outlook for applications for this system extends to Kitchen appliances, a television and all personal computers stationary or portable.

Electronic devices are ubiquitous in society and could be found in everything from household appliances to computers. Many electronic devices include visual display elements that could be used for various purposes, such as visual indicators for indicating the status of a device, in conjunction with a user input device, and so on and so forth. In some cases, input devices (such as keyboards, mice and the like) may be selectively or fully backlit and thus also function as a display element. Other visual display elements may have a purely aesthetic function.

Additionally, the light source required for many visual display elements could quickly drain the power source of the electronic device, which may be a problem, for example, when the electronic device is running on battery power or some other depletable power source. Likewise, uneven or inadequate lighting may make a display element difficult to read.

While many designs for providing displays, lights and other visual indicators on electronic and personal devices have generally worked well in the past, there is always a desire to provide new and improved designs or techniques that result in even more aesthetically pleasing and power-efficient visual display elements. In particular, the ability to provide visual display elements on electronic and personal devices in a manner that could generate a sufficient amount of light to fulfill a purpose, while conserving space and power is desirable.

In February of this year, Apple was granted a patent for a Light Transmissive Display System that utilized a laser beam system to create microperforations and/or tapered holes to create special lighting on the MacBook or Apple's keyboard and so forth. It covered the MacBook backlit logo illumination. Another patent that covered some of this technology in relation to a MacBook trackpad and/or its replacement surfaced in April 2010 that's worth checking out as well.So there's no need to rehash that technology which has been established.

However, there are some new ideas in this area that touch on microlenses and Apple hints of how these new techniques could apply to a wider range of products including appliances such as refrigerators, microwave ovens and televisions. While that may seem out of sync with Apple's product lines today, I've seen patents that they've acquired that go beyond their current market reach. But that's a story for another day. 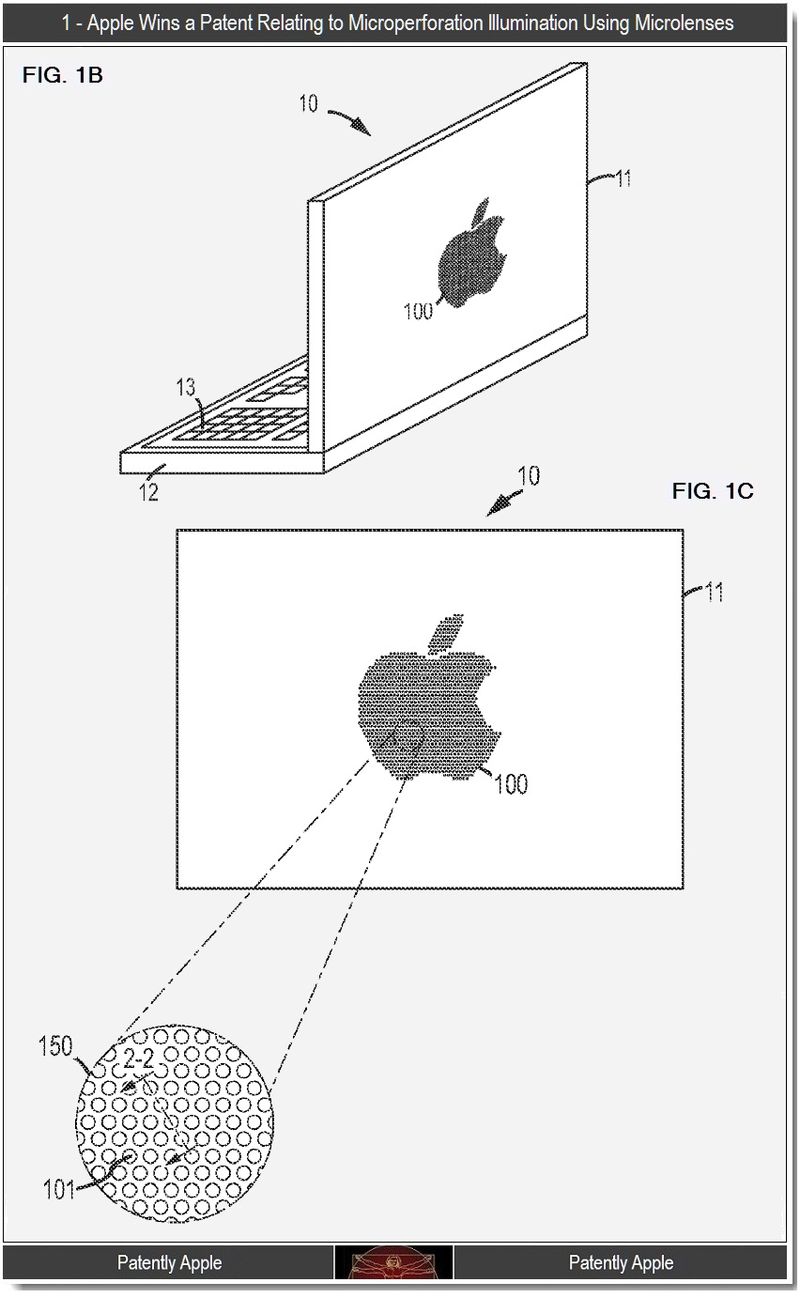 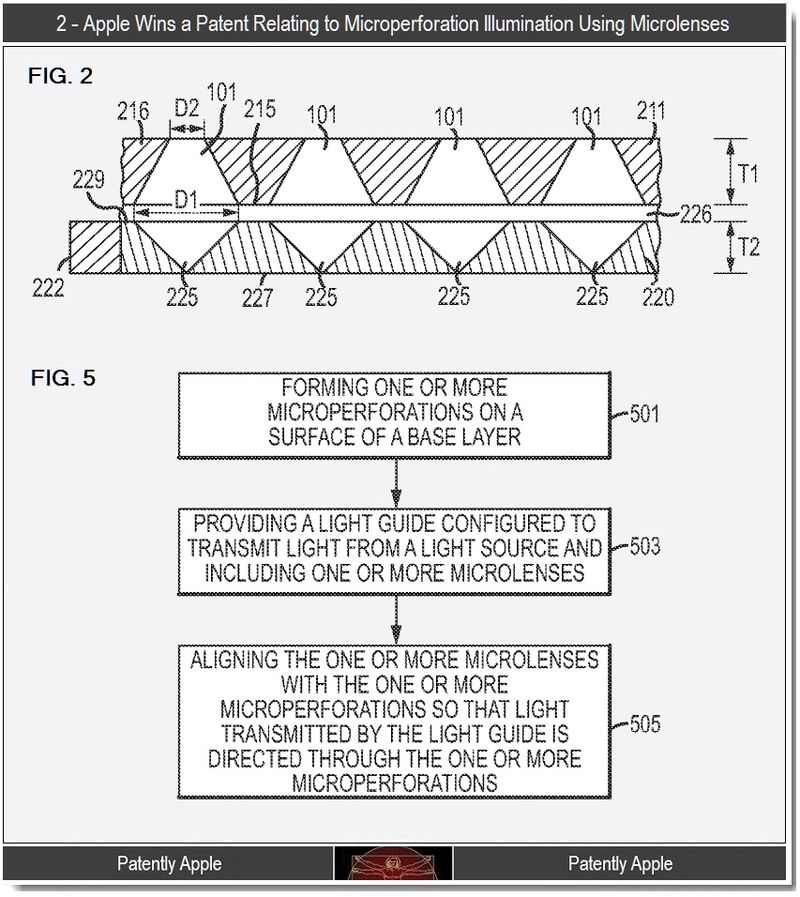 What's new to the table is that Apple's invention introduces new microlenses. Apple states that the light guide used in future products may include an array of concave microlenses. As shown in FIG. 2 above, the microlenses noted as patent points 225 may each have a tapered configuration.

The housing input element may be implemented in a variety of electronic devices including, but not limited to, portable computing devices, cell phones, televisions, personal computers, smart phones, personal digital assistants, media players, appliances such as refrigerators, microwave ovens, etc. and any other suitable electronic devices – such as a mouse. In another interesting embodiment, Apple states that they could use microperforation to backlight a trackpad for a MacBook.

Some embodiments may use side-firing light sources, such as side-firing LEDs. In one example, two side-firing light sources may be positioned on opposite sides of a light guide. Other embodiments may utilize different colored light sources. For example, one embodiment may use multiple light sources of different colors to convey status and/or input device information. Some notebook backlit keyboards use side-firing LEDs, although I'm not sure that Apple does at the moment. If someone knows otherwise, please send me an email. In the bigger picture, Apple notes that their system could apply to future consumer products like appliciances which could provide such a system with some leg room for development.

Thanks for the information i really enjoyed the time having seen what you can do for the iphone tech world.