Steve Jobs, one of the most inspirational leaders of my generation has died at the age of 56. The one that always reached for the Next Great Thing and inspired us all to Think Different will never be forgotten. Patently Apple will not be reporting as usual tomorrow out of respect for Steve. Our comment system will remain open without moderation for the first time in our history in order to allow anyone in or outside of the community to pay their respect until Friday morning. And one more thing:  I've added Apple's Think Different Campaign video as narrated by the Great One himself. It's the first time that I've ever heard this version of it before and it'll always be the way I remember Steve: As one of the Crazy Ones who thought they could change the world, and did. Updated

Update: When we first ran this video on October 5, 2011, the YouTube counter rang in at just slightly over 500 hits. As of November 5, 2011, over 1.6 million people have viewed this version of the Think Different ad. 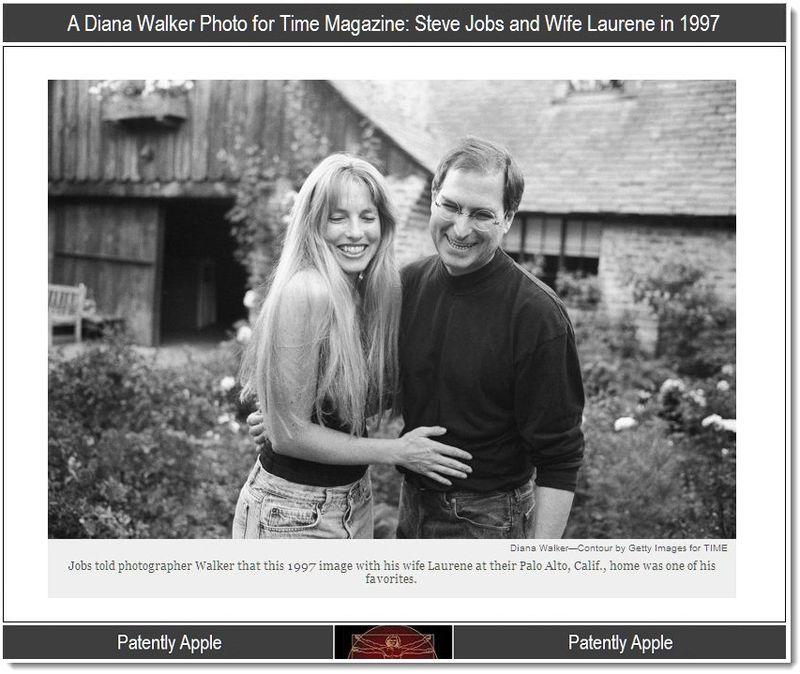 Update #1 - Oct 7, 2011: Above is a photo from Diana Walker for Time. This is one of twelve photos of Steve Jobs that were presented this morning that you should check out. This is a photo of Steve Jobs and his wife Laurene taken at their home in Palo Alto California in 1997.

Update #2 - Oct 9, 2011: Below is a photo of NYC Cabs with a Tribute to Steve Jobs on them. Here's another view of a cab in front of an Apple Store with this same tribute.  Show Media appears to have been behind this tribute and our hats are off to them for it.  Thanks to Philip Orr for that link. 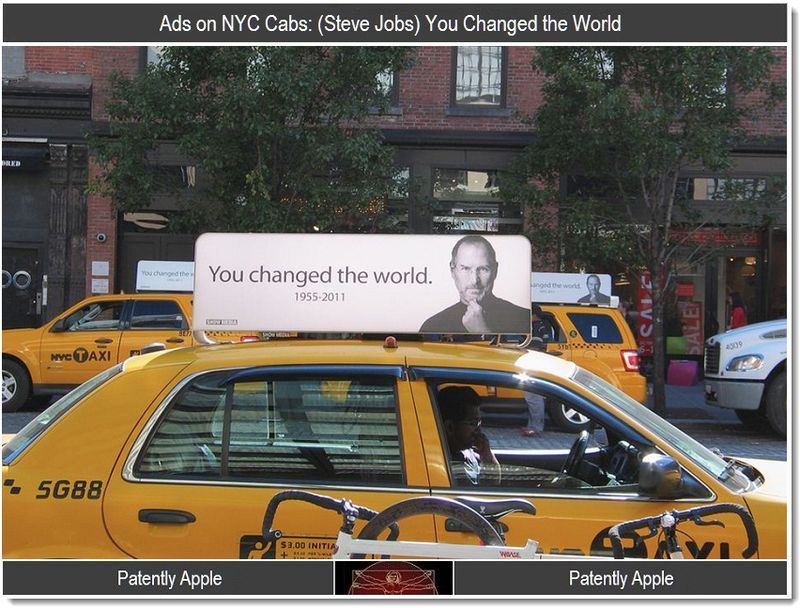 Buckminster Fuller said at a lecture i was once at, that to be sure that what ever you do, love what you do, and the rest will take care of itself... a 4 hour lecture and that and one other thing is all i can remember from it, but it is key.

Steve Jobs reminds me of the same thing.

love what you do above all things, Live to Love...

someday i'll get it right.
Jon.

Yes! Mr. Jobs . You change the world. Thank you.

He did distort reality in the very best and widespread way. He disagreed with apathy and shabby work and left his stamp of a better reality, better products.

OMG!
I'm not happy when I think, SJ won't be there in the dais [lectern], won't deliver his usual scintillating presentation, for the future events. I wish, he could've been given a chance 'one more time' to live.
SAD!

This is a difficult post for me. My own friends and family having been calling and texting me all day because they know that I am the one person they know who has been really connected to this great man and company for more than 20 years. Like one of the other posters, I've been an Apple shareholder for a long, long time, but never really cared whether I lost my entire investment because I believed in this wonderful, talented genius of a leader and his company. His keynote addresses were so impressive and exciting that I'd take off work to watch them.

What a daring risk taker! He made you feel cool about being over 50, or under 30, to be American, or from California or Japan, China, Europe.., to live on this planet, to be a techie, to be green, to compose a song, to hate PCs, to like music, to wear jeans, to make photo albums or home movies, to like the 60s or Star Trek... and to like your computer. Steve Jobs, more than any CEO that I've ever seen, allowed us all to embrace and enjoy living with much more vigor, creativity, ease and fun.

He insisted by the design of his products, down to the packages they come wrapped in, that things we all use and produce and expect from one another, MUST be better. Of course he required his employees to think different. But he challenged all of as human beings to do the same. We should and do expect more out of our technologies. Look around. Our lives are so much more enriched because of his contributions.

My heart goes out to his family. His painful deterioration sadly reminds me of the loss of my father. Steve (and my dad) are truly missed.

I checked my iPod touch at 8PM on Wednesday evening to simply check out CNN's headlines when I was greeted with the news that Steve Jobs had died. I dropped my iPod walked to my office and just stared at a blank screen for about twenty minutes. I wrote this short news story and then watched a number of keynotes until the wee hours of the morning. Oh the fun, the laughter and the joy that we all got from a Steve Jobs keynote.

I only looked up to a handful of people in my life and Steve Jobs was one of the top. I was an early shareholder in Apple before it was fashionable because I knew that he was definitely the one that could save Apple. What a life. What a man. What an inspiration for this and generations to come. Thank you Steve, for everything. I will never forget you.

My deepest Sympathy goes to Laurene Powell Jobs and their four children.

Are we sure there is not: "One more thing"?
He is missed.

My heartfelt sadness goes out to his wife and family and hope they know he will always be with them.

To a great man of our time. His legacy will continue on through those magical products he was so inspired to bring us.

Will miss you, your inspirational talks and that electrical charged effect while on stage.

The good ones always tend to die young.

HE just left us such a great legacy, not only the tangible but the intangibles, not the IPRs but his unlimited way of thinking.

The thought of saying goodbye never really crossed my mind. I guess I just didn't want to think about it. I'm sorry for the pain and suffering that you must have experienced over the last few years while leading Apple forward with the iPad. Thank you for your vision and bravery, Steve, and I guess it's time to say .... goodbye. We'll all miss you dearly.

Why didn't he say goodbye? Will there be a video of him talking about Apple and the future? Will we ever hear him say goodbye to us? I hope so, because we need it. Beyond a book. His words, said his way with his facial expressions. We'd love closure and may never get it. You will be sorely missed by all of us Steve. By all of us.

Steve jobs has given the world the greatest intangible gifts: inspiration, possibility, and self empowerment.

I love Apple. But I loved Apple because of Steve Jobs. Although life moves on, it will never be the same for me. Every keynote will have this gigantic hole in it. I will always remember you and the joy that you expressed with every new invention that changed the rules. I'm just dazed today that you're gone. Just dazed.

Thank you Steve for my first computer, an Apple IIe, and for the profound impact you and Apple have had on my life.

He not only thought different he dreamed different and each and every one of us has benefited. His legacy will live on in all of us.

Very very sad, wish I had the pleasure to meet him.

One Word: iRREPLACEABLE !
The world lost a one of it's Best!
My thoughts and Prayers go out to his Family, He will be Truly Missed.

I had the honor to meet both young Steve's in the early Apple days, Steve Jobs was a real inspiration for me, everything seemed possible for him. It's a major loss for all of us. Good Bye Steve!

RIP Steve. Thanks for revolutionising technology and making our lives richer and more fun. My sympathies and thoughts go to his family and friends.

Thank you Steve. Imagine the world that would have been if you had been with us longer ...