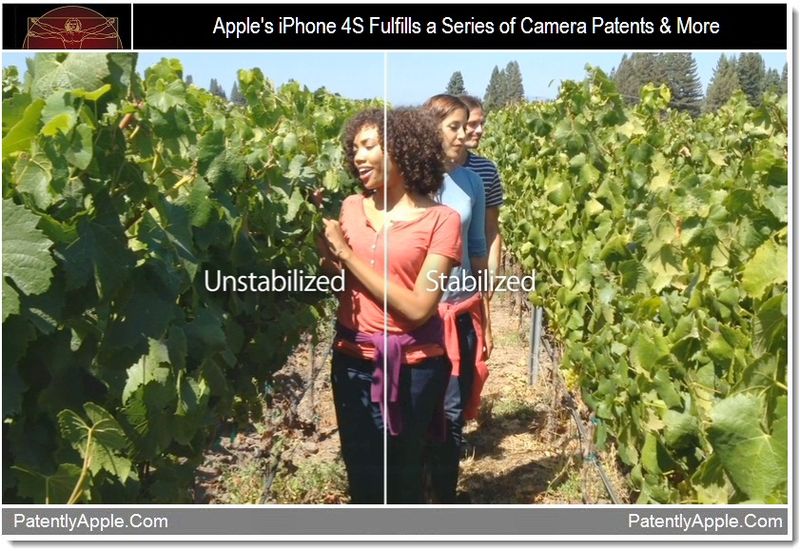 Today, Apple introduced their next generation iPhone called the iPhone 4S. While the iPhone 5 is scheduled to be released in 2012 with likely enhancements such as LTE and/or NFC, there were still a few interesting technologies added to the new iPhone 4S that were worth noting. Apple introduced video stabilization for those that like to shoot videos on-the-go, a face detection feature and contextual voice commands via Siri to name but a few. Today's report focuses on a few of the features that fulfilled and/or touched on Apple's published patents.  Updated

Bob Mansfield, Senior Vice President of Hardware described Apple's fulfilled patent on video stabilization in Apple's new iPhone 4S video this way: "We know that people love to shoot videos on their iPhone, so we made some big advancements here too. iPhone 4S records 1080p HD video at 30 frames per second, plus the gyro along with incredible new software will stabilize your video as you shoot it. This will make your videos run a lot smoother." The bottom right frame of the collage below shows Apple's video pointing out "Unstabilized/Stabilized." 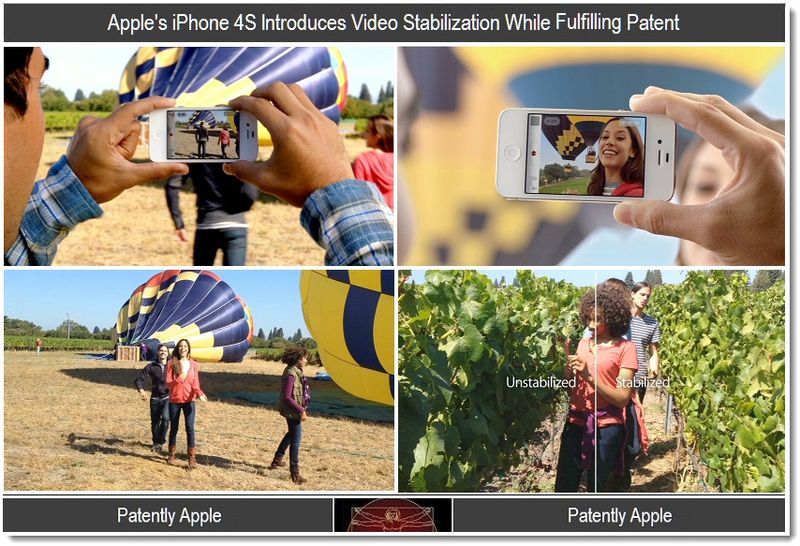 Apple's patent on this technology was published just last week and ahead of the curve once again. It was definitely a feature I was looking for and it'll only improve over time.

Scott Forstall, Senior VP of iPhone Software spoke about the iPhone's new face detection capabilities this way: "We've taken what is already an amazing camera and made it even better. Now with face detection, the camera is smart enough to know whether you're taking a portrait or group shot and automatically focus and expose for either. 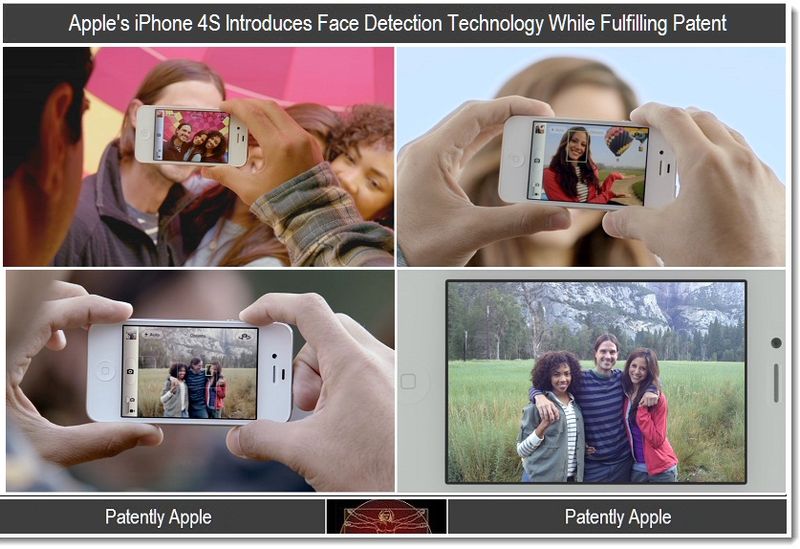 One of Apple's "face detection" patents were published in July 2009 wherein it describes the technology's methodology and may even provide a hint of where Apple could advance this technology on an iPhone in the future.

Today's iPhone 4S introduced iCloud services for iTunes and beyond which fulfills their May 2011 patent application. Another feature described is the iPhone 4S's dual antennas. This could lead to the iPhone storing "many different carrier service configuration profiles at the same time," as described in this August 2011 patent. And finally, there's one more feature to point out that relates to yet another Apple patent. Even though Apple acquired Siri and their technology in April 2010, it's a known fact that Apple had been researching Contextual Voice Commands since at least Q2 2009. It's very likely that Apple's original research has finally found a home in the final product released today. And who knows, having a feature like Siri in sync with the next generation of Apple TV has been on Apple's research roadmap for some time now. Time will tell. In the days ahead after reviewing the iPhone 4S's keynote and literature more closely, we may add other relevant patents that new features fulfilled. If you're aware of us blatantly missing a key patent in today's product releases, then please don't hesitate to contact us with that information.

Update 7:30 PST: After viewing the keynote, I see that Phil Schiller, Apple’s vice president of Worldwide Product Marketing, briefly touched on the iPhone 4S's Hybrid IR Filter. This is something that was covered in Apple's November 2010 patent application. 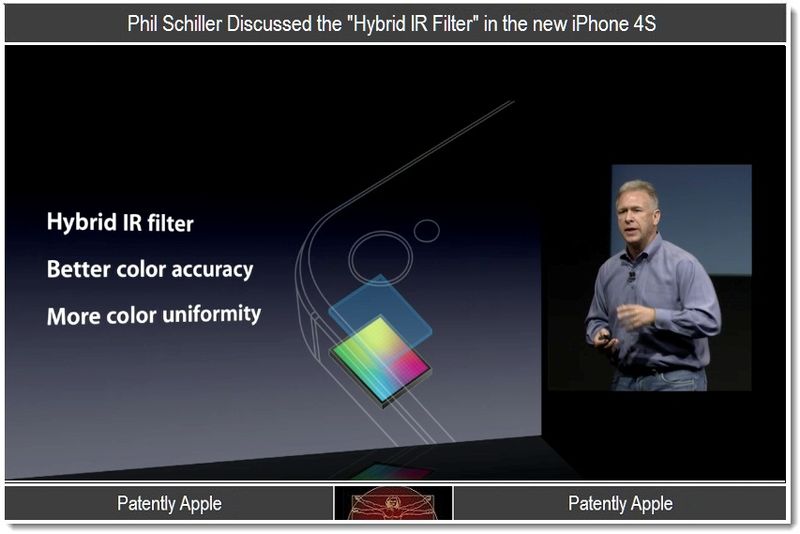 A number of testing documents are now available for review at the FCC for those interested in Cell Phone test results. Many documents related to various Schematics, RF Exposure information, Photos, PCB Layer drawings and user manuals have been blocked by the FCC due to Apple's letter requesting Confidentiality. As noted below, certain testing was only completed on Sunday Oct 2, 2011. 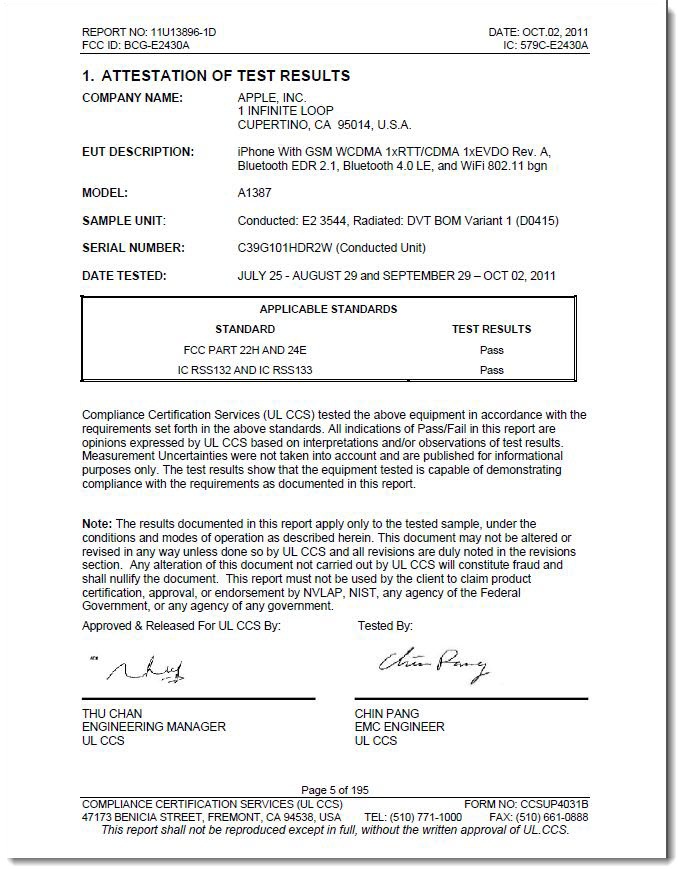 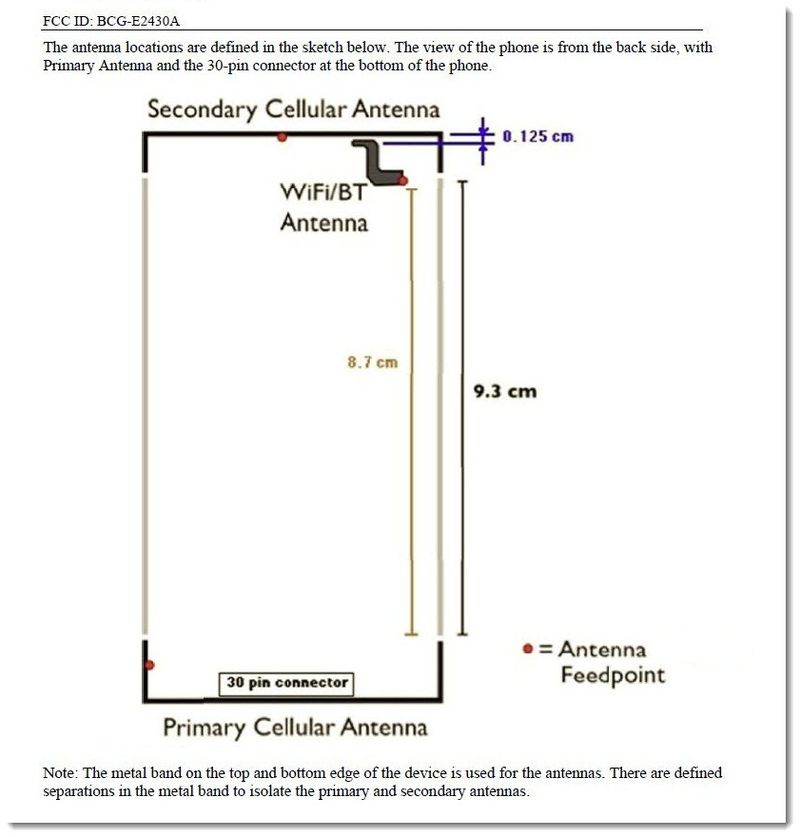 The new iPhone looks much like the iPhone 4. But I do like the white color. It comes with upgraded internals, including the new Apple A5 chip and 1 GB of RAM.The device also contains a new 8-megapixel camera that can take 3264×2448 images, an increase of 60% from the iPhone 4. It is capable of taking in 73% more light than the iPhone 4 and is 33% faster.