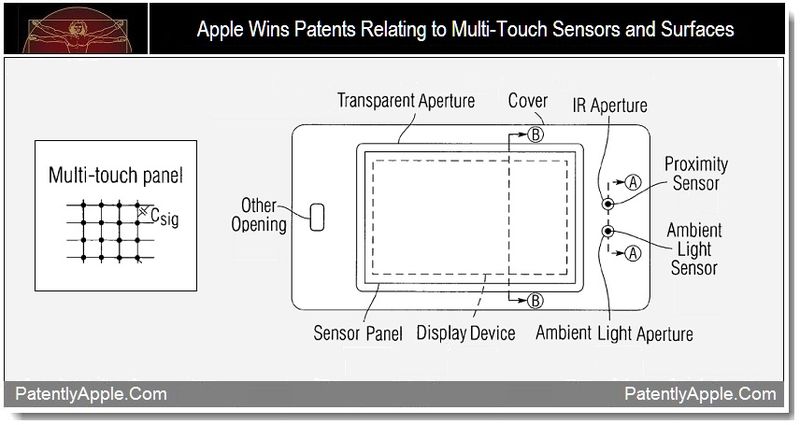 The US Patent and Trademark Office officially published a series of 17 newly granted patents for Apple Inc. today. This morning's report highlights a series of patents covering a wide swath of technologies including multipass video encoding to a service provider activation policy to a backlight and ambient light sensor system and a Cover Flow related patent. Yet the two key patent wins of the day definitely go to those relating to Multi-Touch Sensors and Surfaces; patents that will provide current and future iOS devices with ongoing protection. Most of today's patents are considered patents fulfilled. 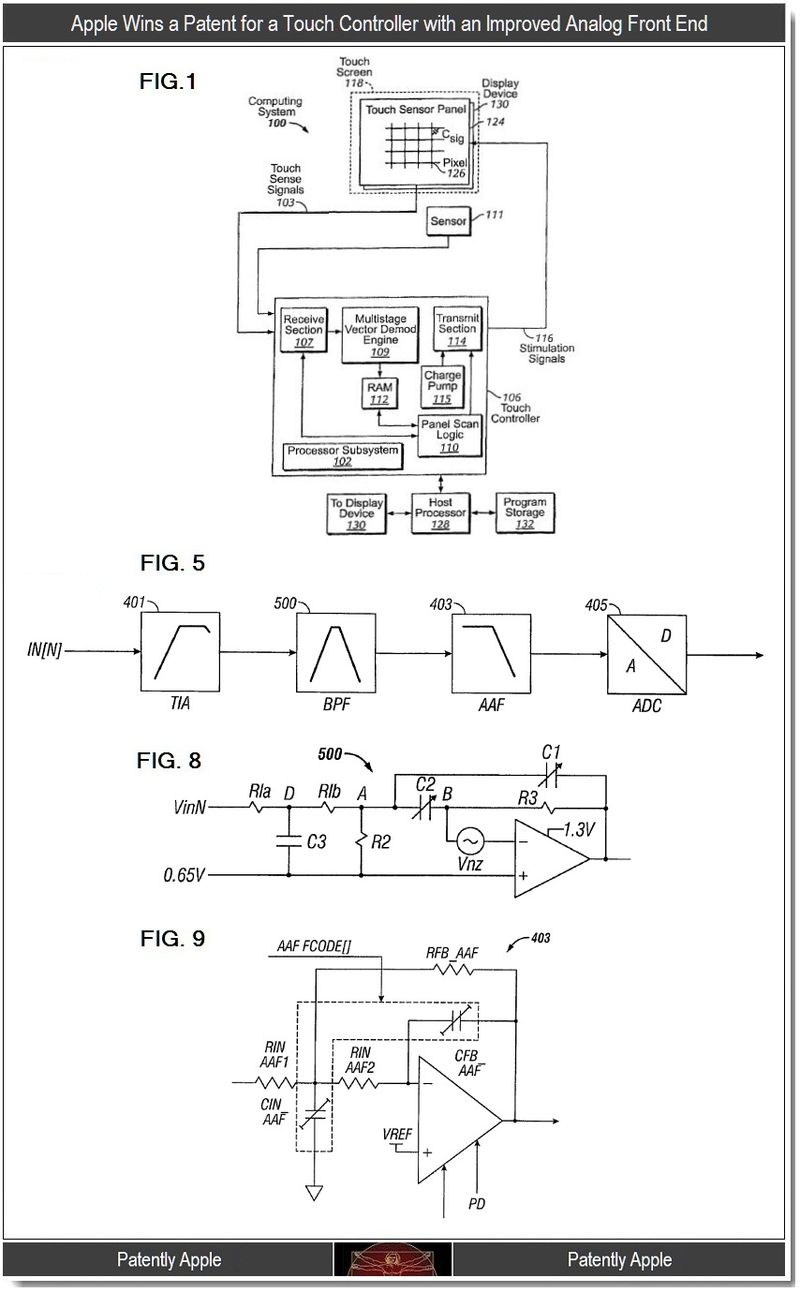 To review Apple's 28 patent claims and invention detailing, see granted patent 8,031,094. Apple credits Steven Hotelling and Christoph Krah the inventors of this patent which was originally filed in Q3 2009. The history of the patent however goes back much further. One referenced date is 2001 with Wayne Westerman as inventor. Wayne Westerman came over to Apple when they purchased Fingerworks.

Apple Wins a Patent for a Multi-Touch Surface Stackup Arrangement

Apple has won another iOS device related patent which describes covers for electronic devices, and more particularly, to a cover that is able to provide light-transmissive apertures required for various sensors and display devices in an electronic device, while hiding them from the user to provide a seamless, uncluttered visual appearance. 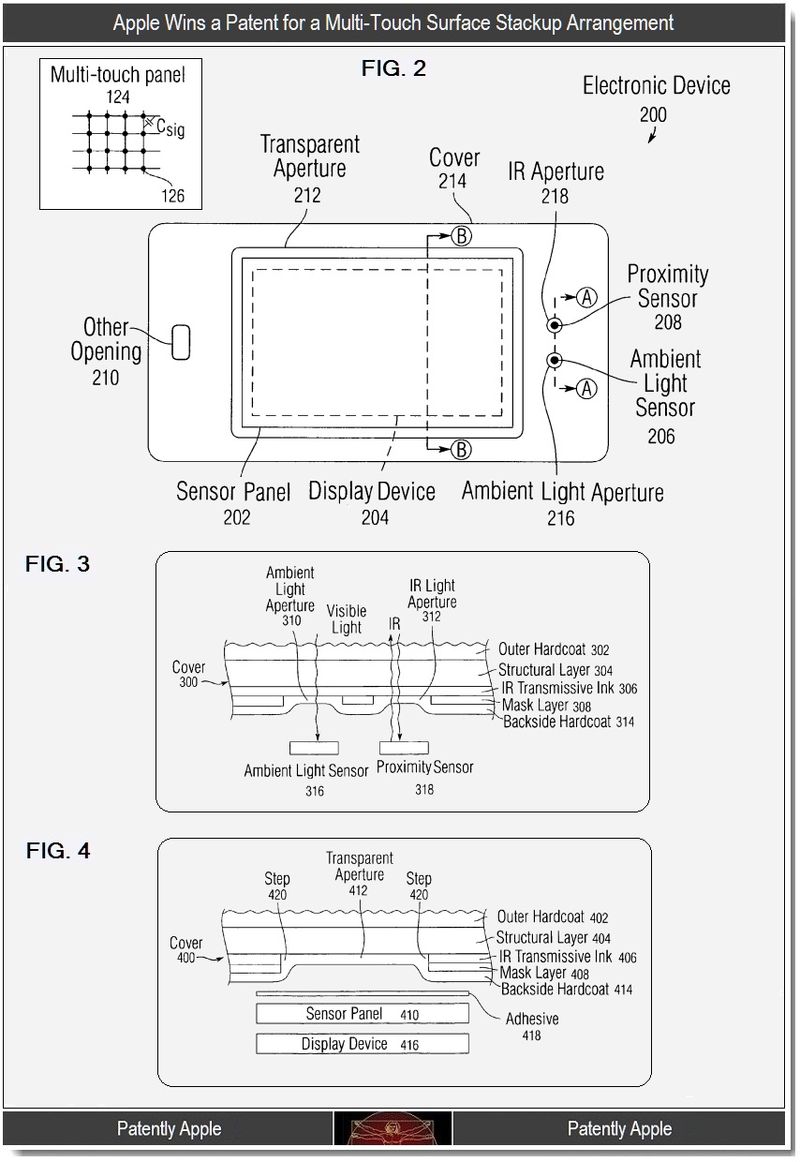 To review Apple's other 36 patent claims and invention detailing, see granted patent 8,031,174. Apple credits Mark Hamblin and Richard Dinh as the inventors of this patent which was originally filed in Q1 2007.

Apple has been granted a patent that relates to automated creation of media asset illustrations. As you could see below, it directly relates to what we've known to be called Cover Flow. 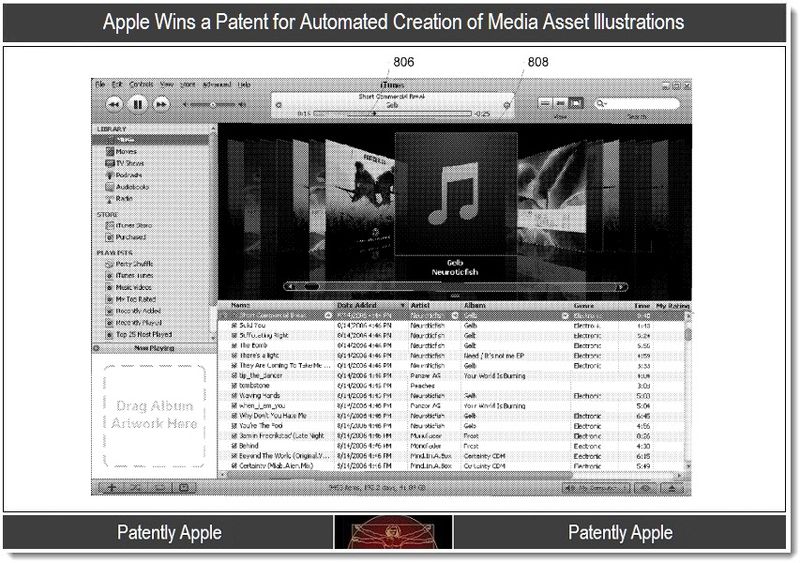 To review Apple's 19 patent claims and invention detailing, see granted patent 8,032,565. Apple credits Imran Chaudhri; as the sole inventor of this patent which was filed in Q1 2010 – though it dates back to 2007.

Apple Wins a Patent for a Device with an Illuminable Portion 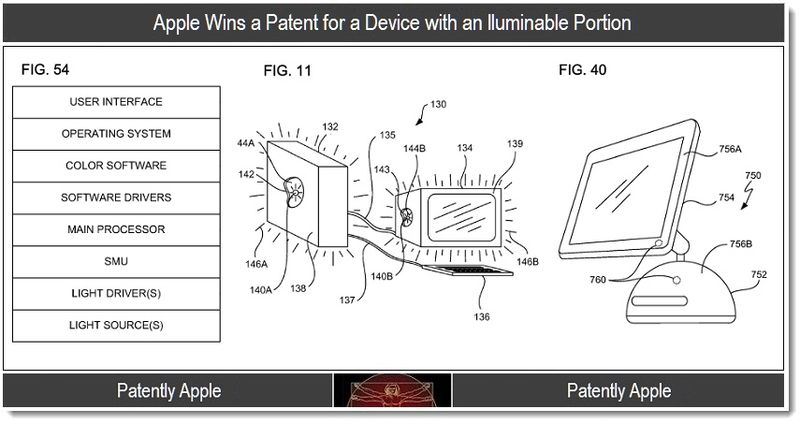 To review Apple's 20 patent claims and invention detailing, see granted patent 8,029,166. Apple credits Duncan Kerr and Steve Hotelling as the inventors of this patent which was filed in Q3 2009 though dates all the way back to Q2 2001.

Granted Patent 8,031,864: Dual-Purpose Hardware Aperture: Apple's invention provides a system which supports a dual-purpose aperture for an electronic device. This system includes a first component configured to perform an acoustic function through the aperture and a second component configured to perform a non-acoustic function through the aperture.

Granted Patent 8,031,164: Backlight and ambient light sensor system: Apple's patent covers apparatuses and methods relating the operation of a device's display. In some embodiments, a method includes receiving a user setting of a display control parameter, and altering, based on the user setting, an effect of an ambient light sensor value (ALS) on control of the display control parameter. It also includes receiving a change to one of a display brightness output level and an ambient light sensor output level, and altering, according to the change, a display contrast output level. In some embodiments, a method of operating a proximity sensor of an electronic device includes receiving a light sensor output, and altering, according to the output, an on/off setting of a proximity sensor.

Some of the Other Granted Patents published today include RE42,779 Apparatus and Method for Handling Digital Image Data [Camera Related]: 8,032,673 Transaction ID Filtering for Buffered Programmed Input/Output (PIO) Write Acknowledgements; 8,032,672 Increased Speed of Processing of Audio Samples Received over a Serial Communications Link by use of Channel Map and Steering Table: 8,032,371 Determining Scale Factor Values in Encoding Audio Data with AAC; and finally, 8,032,670 Method and Apparatus for Generating DMA Transfers to Memory.

Today is the big day when the next generation iPhone rolls out and it's bound to be exciting. I wish Tim Cook all the best in his first keynote as Apple's new CEO.

Very cool that they got all these. Particularly the illuminated portion one. Surprising they didn't apply for or get this years ago.