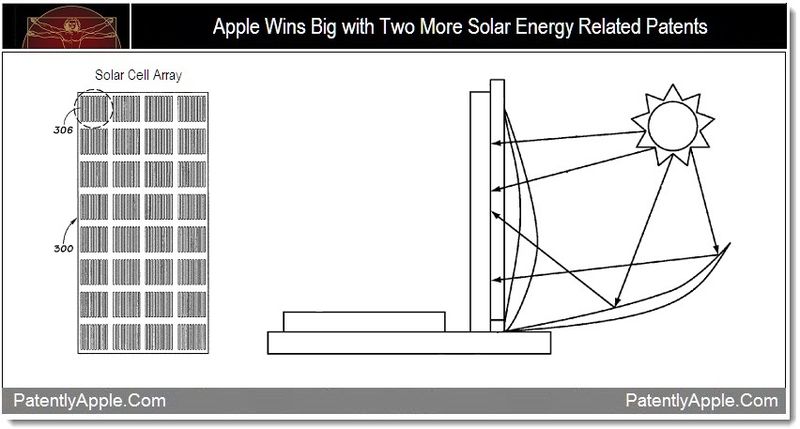 The US Patent and Trademark Office officially published a series of 20 newly granted patents for Apple Inc. today. In our first report of the day we focus on Apple being granted a couple of new solar energy related patents. As we learned at this year's IDF fall session, a notebook's display is a real energy hog. In order to extend battery life, the industry will be moving to "Panel Self Refresh" technology by 2013 in the hopes of saving mobile users about an hour's time of battery life per day. And like Intel, Apple is researching methods of harnessing solar energy to further extend the run time of all portables. Today's patent wins cover new solar cell assembly methods and how MacBooks could harness the power of the sun one day with a specialized back panel reflector. Apple is definitely on a roll this year as these patents mark their fourth and fifth solar related wins.

Apple has received a Granted Patent that relates to new methods and apparatus for assembling integrated circuit components to substrates; and more specifically relates to improved methods and apparatus for singulating semiconductor devices after mounting to a substrate. Along with uses with other types of semiconductor devices, the present invention provides particular advantages with respect to the assembly of components including solar cells, such as in the forming of solar arrays.

Using the example of semiconductor die which include photo-voltaic cells, commonly referred to as "solar cells," many if not most applications of solar cells require the use of multiple such cells in order to form a useful assembly, such as a solar panel. Such solar panels may range from relatively small, such as only a few square inches, as might be used to provide power to a portable, consumer-type device. 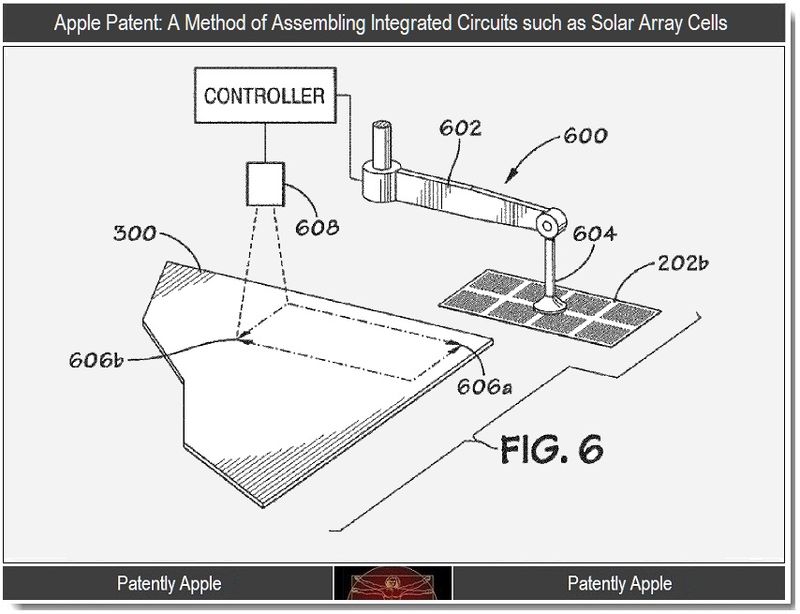 Apple's patent FIG. 6 noted above depicts a portion of a placement device (600), such as a conventional die placement device, conventionally known as a "pick and place" machine, in process of performing its function, as adapted for purposes of the present invention. For example, such a placement device typically includes an arm, as depicted at 602, with a contact head 604 coupled thereto.

One advantage of the system of this example is that the separate motions required of the placement device to fully populate all mounting sites of a printed circuit board are significantly reduced relative to conventional technology, wherein each mounting site would be populated with a discrete solar cell die.

One of the methods noted in Apple's patent includes the act of laser dicing the semiconductor wafer segment through use of a frequency-doubled, diode pumped semiconductor laser.

When we begin seeing patents about solar cell array manufacturing methods with this kind of detail, it's a good sign that Apple is further along on delivering this technology in the future than some may think.

To review Apple's 12 patent claims and invention detailing, see granted patent 8,039,360. Apple credits Bradley Spare, Michael Hillman and Gregory Tice as the inventors of this patent which was originally filed in Q3 2008.

Apple has received a Granted Patent that relates to apparatus and methods for harnessing external light to illuminate a display screen of an electronic device such a MacBook or iPhone. Our March 2010 report covered this extensively. 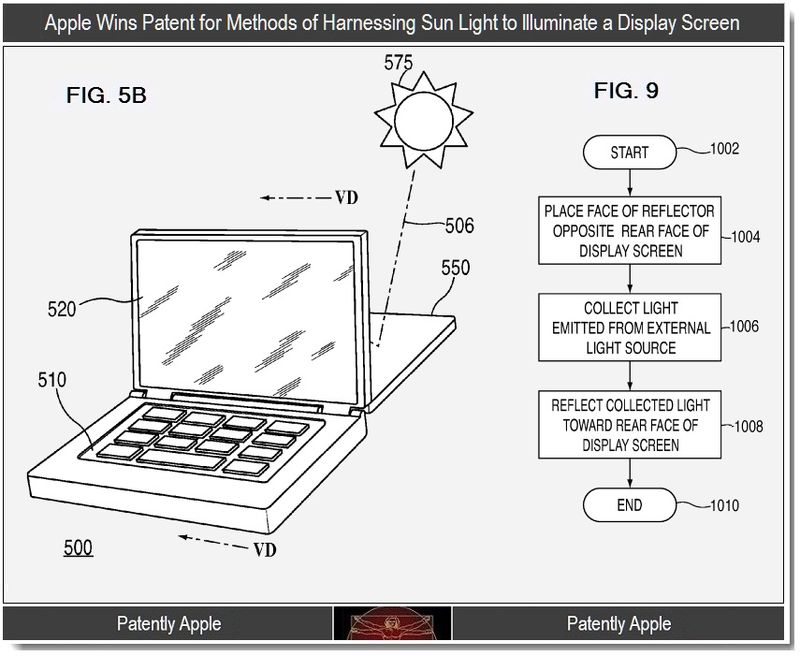 Being that patents present concepts, the drawings don't have to be highly accurate as to what the final product will actually look like in its finished form. Meaning that Apple could have the top third of the MacBook's back-lid fold down and act as a sun reflector powering a line of solar cells that are behind it. However the end product looks like, we all know that Apple's designs are always thoroughly thought out. Patent graphics have to be understood as only having to reflect a concept and not the final product's appearance.

To review Apple's 56 patent claims and/or invention detailing, see granted patent 8,040,465. Apple credits Peter Mahowald as the sole inventor of this patent which was originally filed in Q3 2008.