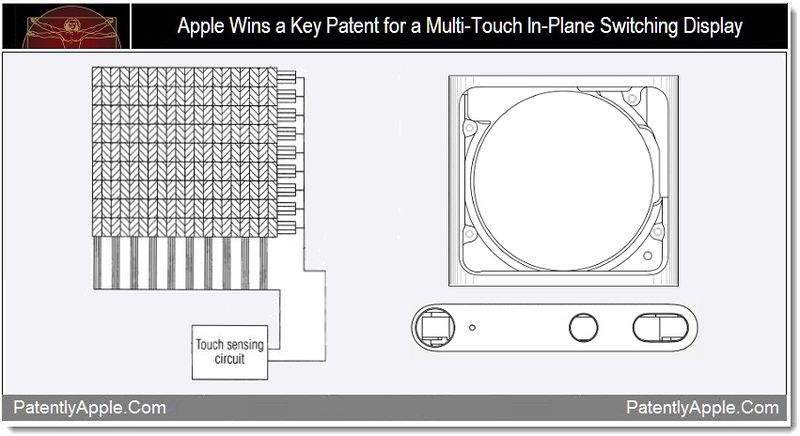 The US Patent and Trademark Office officially published a series of 20 newly granted patents for Apple Inc. today. In our second report of the day we focus in on a key Apple Multi-Touch patent relating to an In-Plane Switching Display. Multi-Touch based In-Plane Switching or IPS first debuted on the iPad 2. Apple has also won two iPod nano related patents and one for their boring yet functional iPad dock. And lastly, in our granted patent round up of the day, we present you with an iPhone-nano like design that was on the minds of Apple's engineers back in 2006. 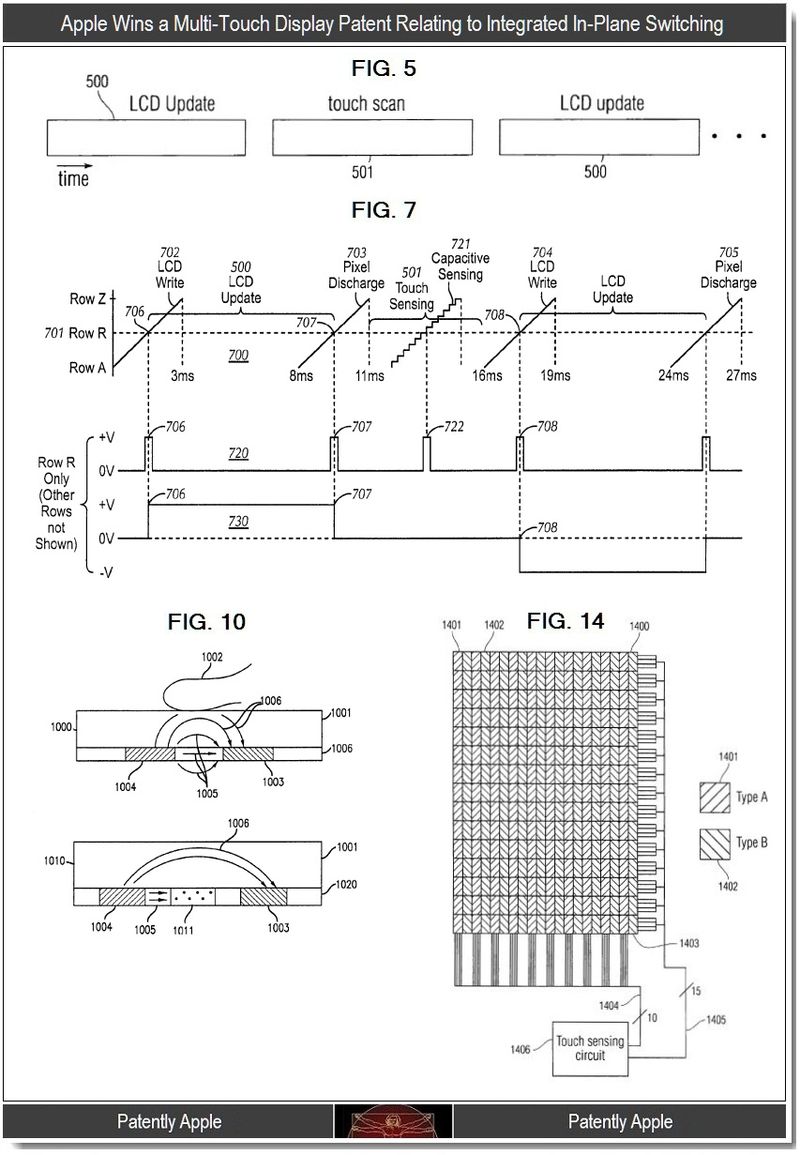 To review Apple's other 33 patent claims and invention detailing, see granted patent 8,040,326. Apple credits Steve Hotelling and John Zhong as the inventors of this patent which was originally filed in Q2 2007 just prior to the iPhone's official debut. Also see our January 2010 patent report on IPS as well as our August 2010 report that points to a multi-touch IPS display for future MacBooks.

The US Patent and Trademark Office have officially granted Apple 3 design patents today which cover the iPod nano's housing, the nano's display module and the iPad dock. 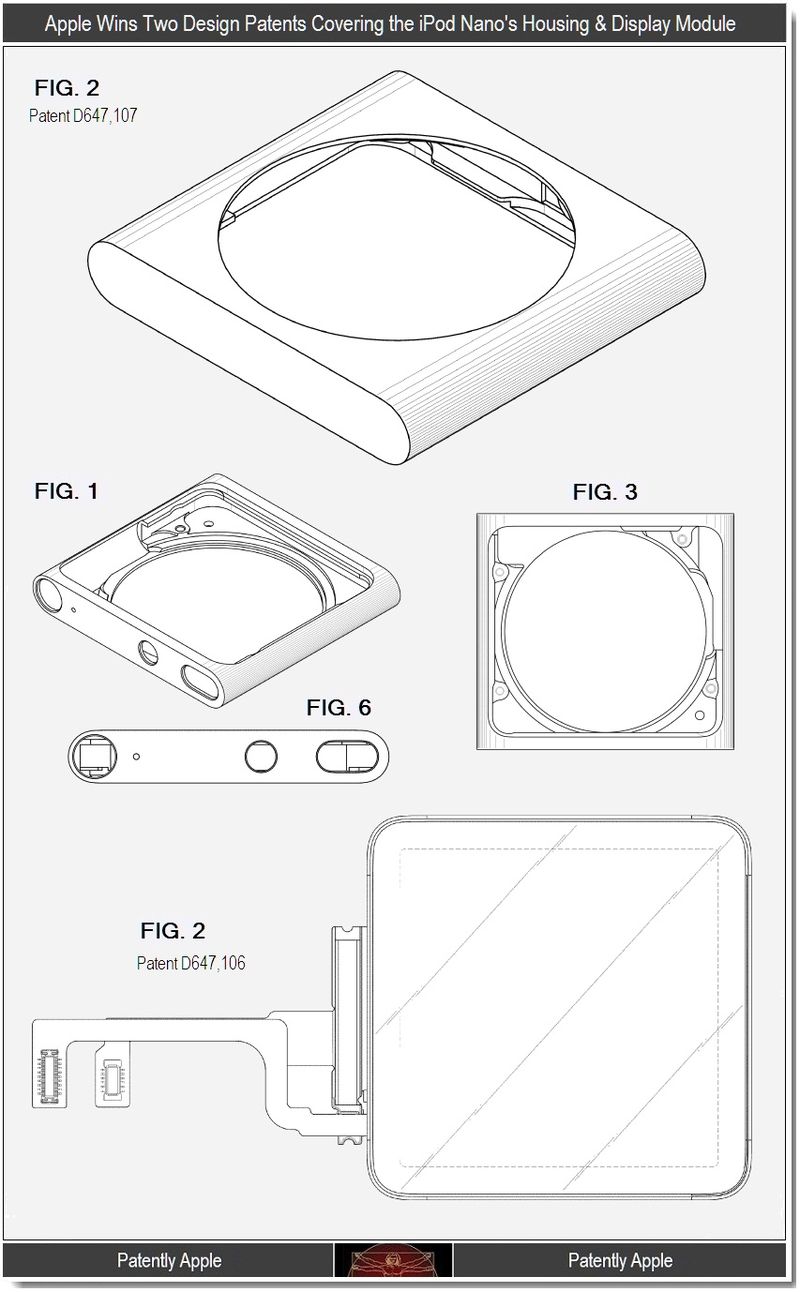 Apple's Display Module design patent D647,106 was filed at the same time and the bottom patent graphic FIG. 2 shown above is from that patent. A few of the designers are different on this patent and include one new name, Emery Artemus Sanford. Apple also gained a design win for their iPad dock today.

That last patent isn't about a specific phone design in the least and yet it may illustrate that an iPhone-nano-like design was very much on the minds of Apple's engineers back in 2006. Is that idea now scrapped being that iPhone subsidies allow older models of full size iPhones to sell for only $99 – or is it a concept that's still on Apple's roadmap? Time will tell.

As a side note, keep in mind that the interface as shown below could be segmented with LED based buttons and not necessarily be designed with physical buttons as some may think. See our April report which discusses segmented electroluminescence that makes that case. 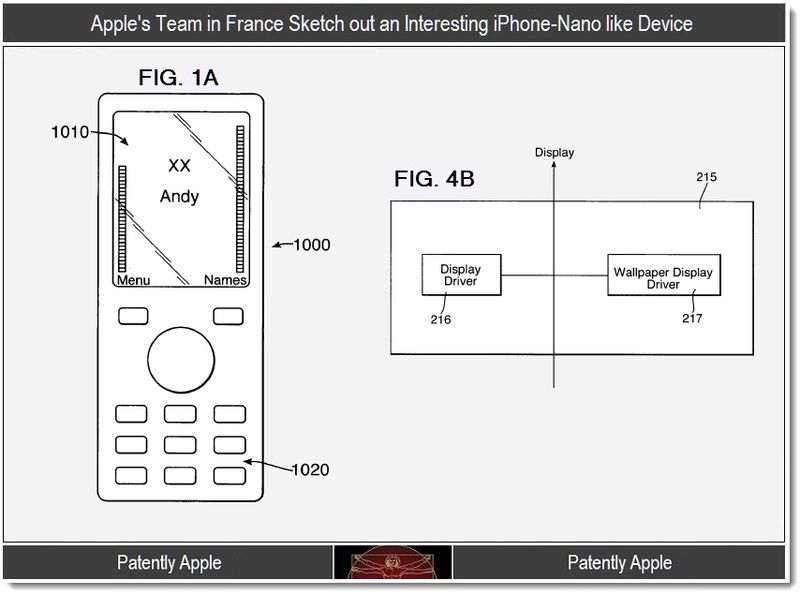 Ha, good eye Al. Yes, the patent specifically states that "An example is shown in FIG. 1A, which illustrates a mobile telephone 1000 comprising a keypad 1020 and a display."

Keep in mind Al that the design of a nano phone in this patent wasn't the focus of the patent. But it does show that Apple's engineering team was at one point toying with a nano phone concept. Any nano phone would be touch-centric as their "official" iPhone nano patent proves out.

Blah-blah-blah - in the end you did catch a flaw in the design, virtual buttons or not. Ha! Good one.

I hope that this wasn't an iPhone Nano, since it doesn't have buttons for all 10 digits...