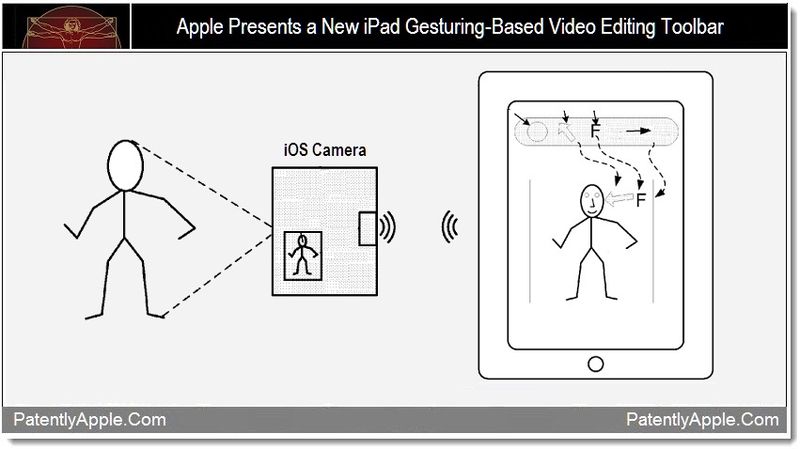 On October 25, 2011, the US Patent & Trademark Office published a patent application from Apple that reveals their intentions of providing a future version of the iPad with an advanced gesturing-based video editing toolbar. The new toolbar will provide fixed options for starters yet allow for gesture customization by the more advanced user. One of the new tools will interestingly allow for on-video annotations. This is great news for those who love taking videos with iOS devices at home, on the road and especially for business.

According to Apple's new patent documentation, a user will be able to perform gestures on a future version of an iPad display that will directly or indirectly manipulate, control, modify, move, actuate, initiate or generally affect graphical elements such as cursors, icons, media files, lists, text, all or portions of images, or the like within the GUI.

Gestures, in general, could take many forms. For example, a gesture could take the form of a geometric pattern (e.g., half-circle, circle, square, triangle, etc.), a symbol (e.g., check mark, question mark, simple arrow with any shaped terminator, caret, etc.), letters, predetermined patterns, user programmed patterns, and combinations thereof. When a gesture is applied to the iPad's display, the iPad could automatically determine a boundary corresponding to the selection indicated by a gesture using positional data corresponding to the contours of the gesture on or near the surface of the iPad's display. 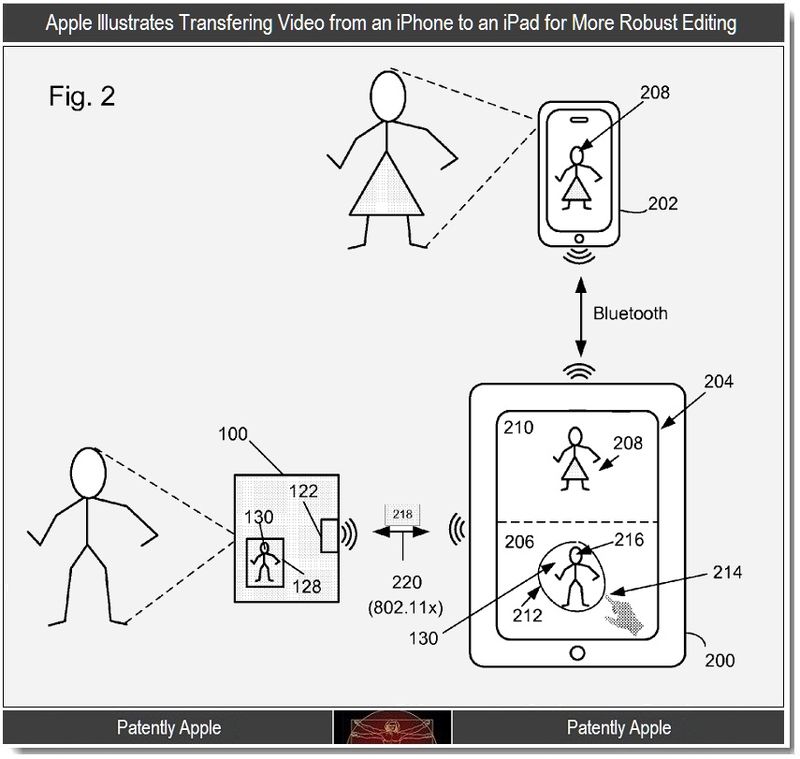 In a particular implementation shown in Apple's patent FIG. 2 above, that portion of image 130 taken by an iOS video camera, and included within the boundary, could be annotated by, for example, displaying a highlighting halo or other such indicia. It should be noted that in some embodiments a prompt could be used to initiate any actions corresponding to an applied gesture. In this way, a gesture even though applied could be corrected or otherwise refined.

The gesture 212 shown in FIG. 2 could take the form of a closed loop that encloses an object. In this case, gesture 212 could enclose a portion of images 130 such as, for example, the face (216) and tag so that it could be used with a mechanism for facial recognition to determine special facial characteristics.

Apple's patent FIG. 2 also shows video taken on an iPhone being transferred to an iPad for more robust editing. Apple hints ever so lightly that the processor of the iPhone may not have sufficient processing resources available to carry out the video editing or processing of digital video data and that the iPad would. I would guestimate that Apple may be hinting at a future point in time when the iPad may incorporate a more robust processor that the iPhone (e.g. a 4 or 8 core processor). But that's just my interpretation. 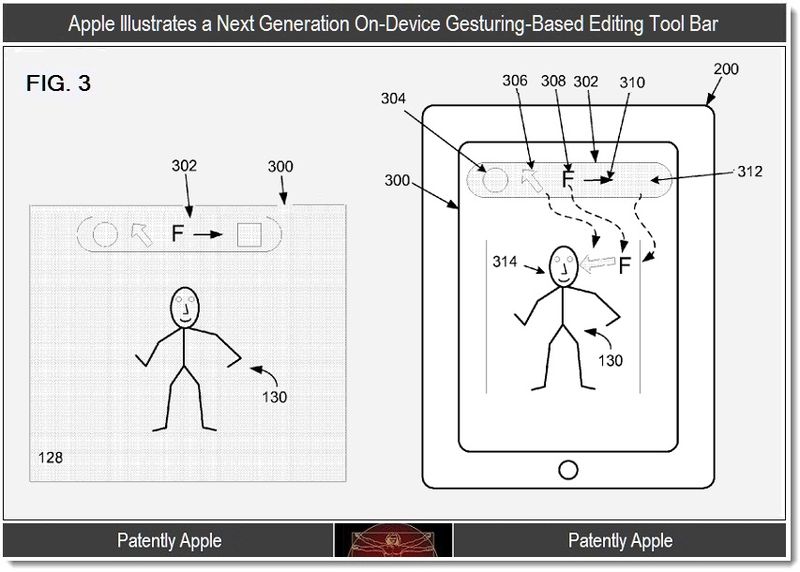 In Apple's patent FIG. 3 we see a particular new menu 302 that presents a number of pre-defined gestures as well as gestures defined in a more ad hoc basis. The gesture menu in figure 3 illustrates a selection gesture 304, pointing gesture 306 used to point to a specific portion of image 130, facial recognition gesture 308 used to activate a facial recognition application, associating gesture 310 used to associate one or more objects and orientation fixing gesture 312 used to fix an orientation of an object or objects regardless of the orientation of iOS device's Camera.

Apple refers to a mysterious "Table 1" regarding a new gesturing table for editing video, which isn't supported in this patent's documentation. Whether this was intentional to safeguard the gesture definition table at this early stage or not isn't known at this time. Without said table, it's difficult to ascertain the depth and/or number of new editing gestures that Apple is considering on providing.

Apple defines gesturing for this application as being performed by moving one or more fingers or other objects in a particular manner on touch I/O devices such as tapping, pressing, rocking, scrubbing, twisting, changing orientation, pressing with varying pressure and the like at essentially the same time, contiguously, or consecutively. A gesture could be characterized by, but is not limited to a pinching, sliding, swiping, rotating, flexing, dragging, or tapping motion between or with any other finger or fingers. A single gesture could be performed with one or more hands, by one or more users, or any combination thereof.

The Mention of 3D Gesturing isn't Much to Get Excited About

And lastly, Apple states that hand gestures in either two or three dimensions could be sensed by the video capture device using IR sensors, optical sensors, and so on. However, this is only mentioned once in the patent and wasn't supported in Apple's summary nor anywhere else in the patent, so I wouldn't get too excited about that. It's a side-point that really has no bearing on the core idea of the editing bar. For those wishing to see a patent that is actually focused on 3D gesturing, check this one out.

Lastly, Apple's patent application 20110259176 titled "Musical Instruction and Assessment Systems" has surfaced. The patent application relates to features that are available in Apple's latest GarageBand upgrade covering lessons and the ability to have your recorded playing of those lessons assessed for mistakes. 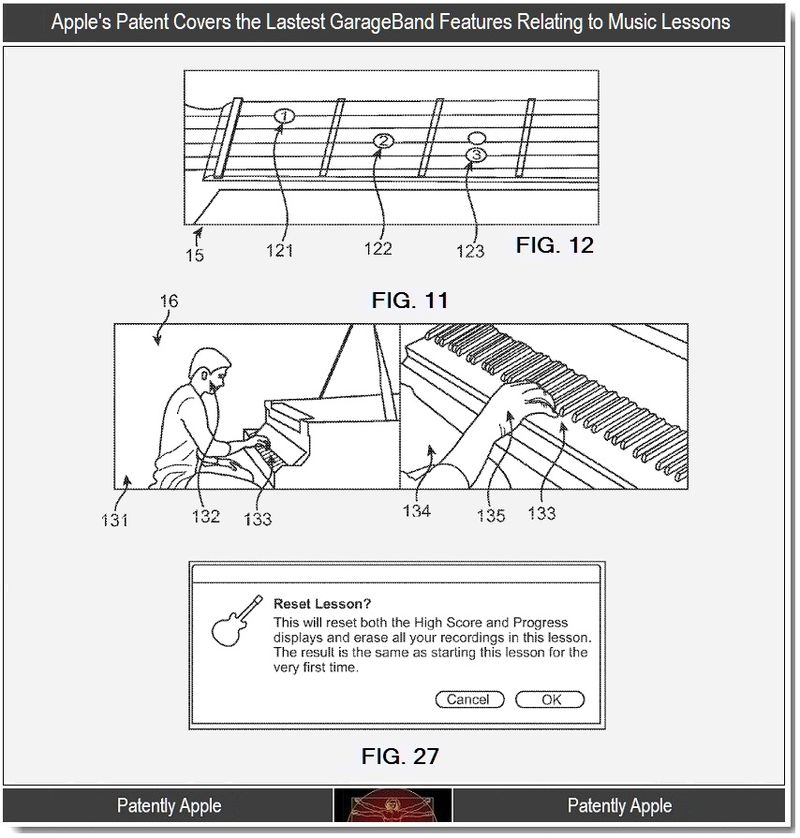 Steve jobs has given me lots of inspiration in my life, especially after I watched his documentary movie called "Pirates of silicon valley". Since that time I became an optimist, confident and work hard, I think he is the most giving a major change in the world of IT, and the most I liked about him was he was always concerned with beauty in its products, it is seen from the design of the iphone that so elegant and become a trend center for Apple competitors. I really miss him :(