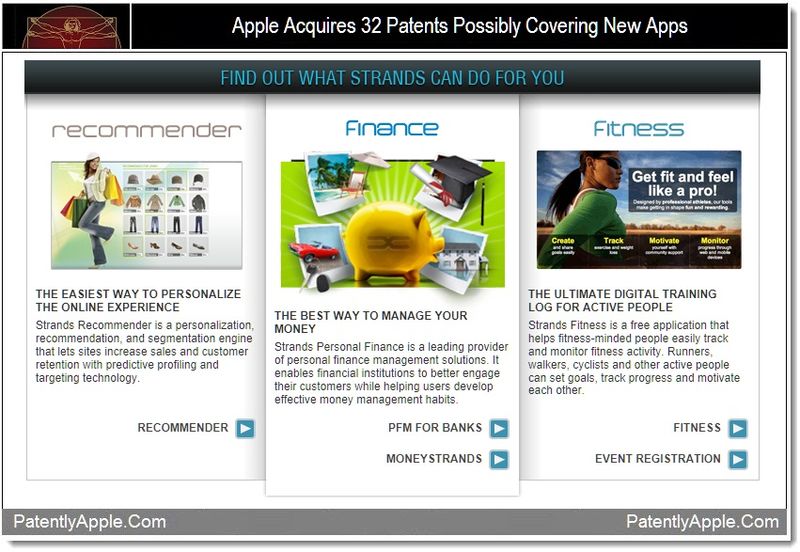 Patently Apple has discovered that Apple Inc has recently acquired thirty-two new patents and/or patent applications covering such matters as playlists, music kiosks and possibly finance, fitness and shopping apps too. The transaction took place earlier this month. The patents hold promise and may even assist Apple in one of their current legal cases. Today's report generally covers the patents that were acquired by Apple and points to a twist in the process of how Apple came across these patents. At the end of the day, our report could have been titled: Apple Acquires Patents: The Good, the Bad and the Ugly. You'll see why as you read on.

A recent patent infringement lawsuit was brought against Apple by Personal Audio concerning music playlists. It's a case where Personal Audio has already been partially successful.

Now we learn that Apple has just acquired 32 new patents that originally came from Strands Inc. Many of these patents cover all-things related to Media Playlists that may assist in Apple's legal case.

One of the key media playlist patents were covered in granted patent 7,693,887 titled "Dynamic identification of a new set of media items responsive to an input mediaset." This particular patent covers the entire process of creating media playlists as shown in the patent figures below. This particular patent also discusses the creation of a music kiosk - an idea that Apple presented back in 2009. 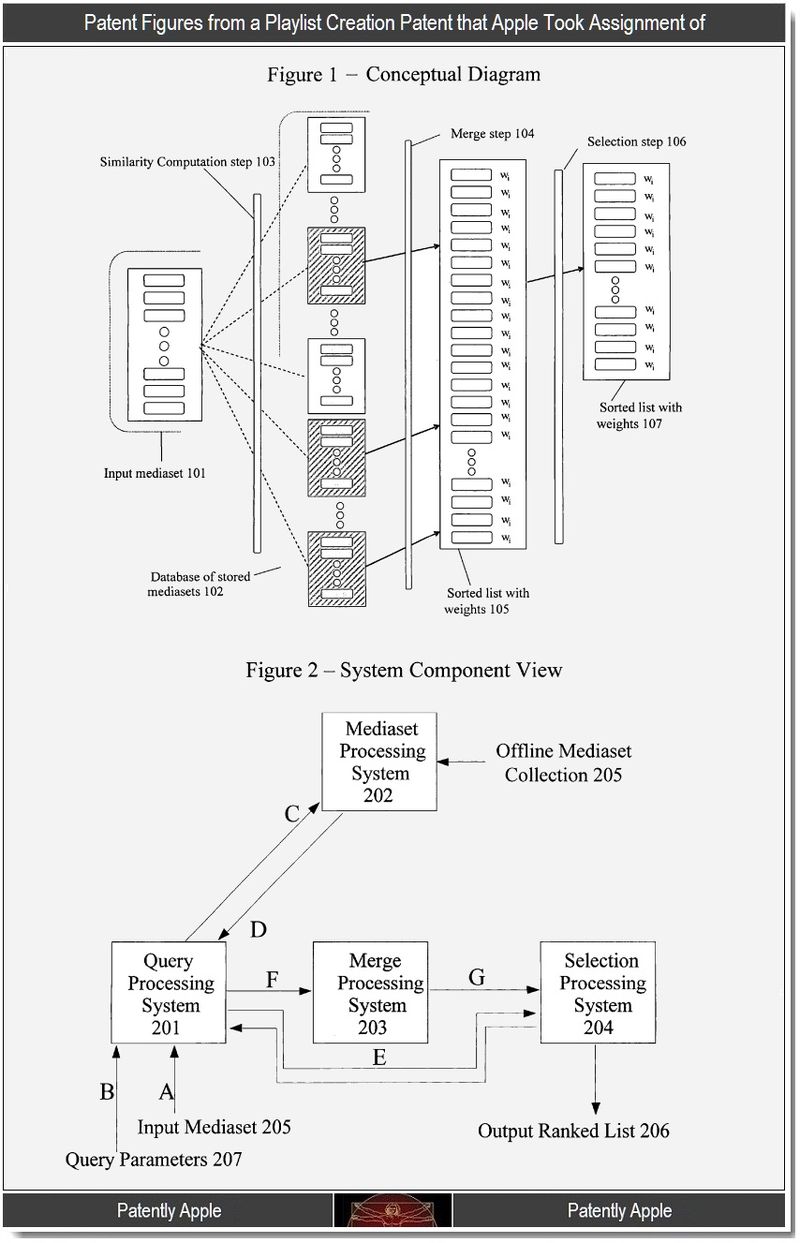 About the Patent Figures: Patent FIG. 1 shown below is a conceptual diagram of a method of generating a list of media items, responsive to an input mediaset; Patent FIG. 2 is a block diagram of principle system components and communication paths among them.

Other Projects that could benefit from these Patents

There's no mystery that Apple is working on an e-wallet project for the future and it'll likely utilize NFC technology. And to make this technology relevant and interesting, Apple is thinking of tying in certain interrelated apps for shoppers that includes one for social networking and one that even extends to the virtual closet. Such apps will need the e-wallet's historical purchases data in order to know what clothing items to eventually put into this virtual closet application and so forth.

This fine interconnection between technology, hardware and the consumer experience is the makeup of Apple's famed holistic approach to projects. So it's interesting to note that one of Strands apps covers a Personalized Shopping experience app. This could go a long way in kick starting Apple's shopping app project being that it's already in the market.

Perhaps more interesting is the fact that Strands Inc. also has other powerful apps relating to finance and fitness. The fitness app is already available for the iPhone. Whether these apps are covered in the newly acquired patents is unknown at this time, but it sure would provide Apple's stale iLife suite with a badly needed boost in the arm. Time will tell - but we certainly hope they are.

Overview of the Patents Acquired 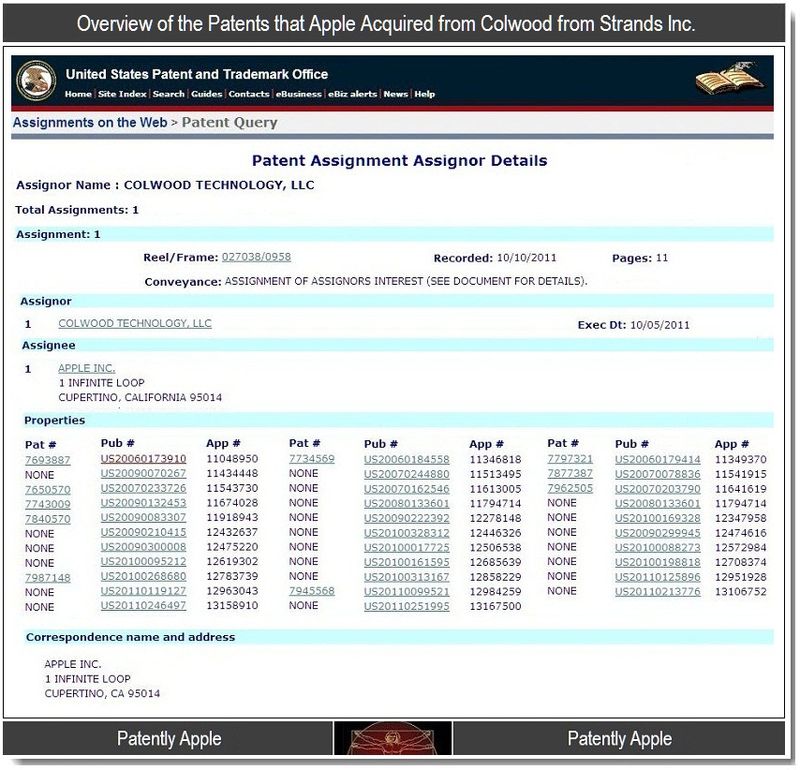 The Licensing Twist and Failure

Going back to the original acquired patent that we covered earlier, it should be noted that Strands Inc openly presented the fact that they were open to licensing their technology as presented below:

"Another alternative business model calls for licensing software that embodies aspects of the invention to online vendors of digital media such as music or video, to enable increased sales of music per consumer, and increased attraction and retention of consumers to their portals or platforms that support digital media. For example, enabling recommendation software can be licensed to such online vendors of digital music, who run the software on their servers. The vendors design into their user interface a feature that enables their consumers to specify input mediasets, and the recommendation software returns a list of related media items. Thus the consumer specifies a mediaset of items that captures their current interest, and gets in return a new set of media items that they are likely to want to view or purchase. In this fashion, consumers can quickly locate items that they will be willing to purchase. The enabling recommendation software, implementing the present invention, can be licensed to the music or other media vendor on mutually acceptable financial terms, e.g. applying flat rates or a royalty based on generated sales. The music vendor need not be online; similar advantages can be enjoyed at a brick and mortar location as well, such as a record or video store."

Now here's the twist: According to someone close to the situation, Strands Inc had approached Apple back in 2005 and later communicated with Steve Jobs in 2010 about their patents. Obviously the two sides couldn't come to an agreement. But as you could see with an example of one of the patent assignment trails illustrated below, the patents clearly belonged to Strands Inc, then sold to Colwood Technology and finally to Apple.

The Paper Trail to Apple 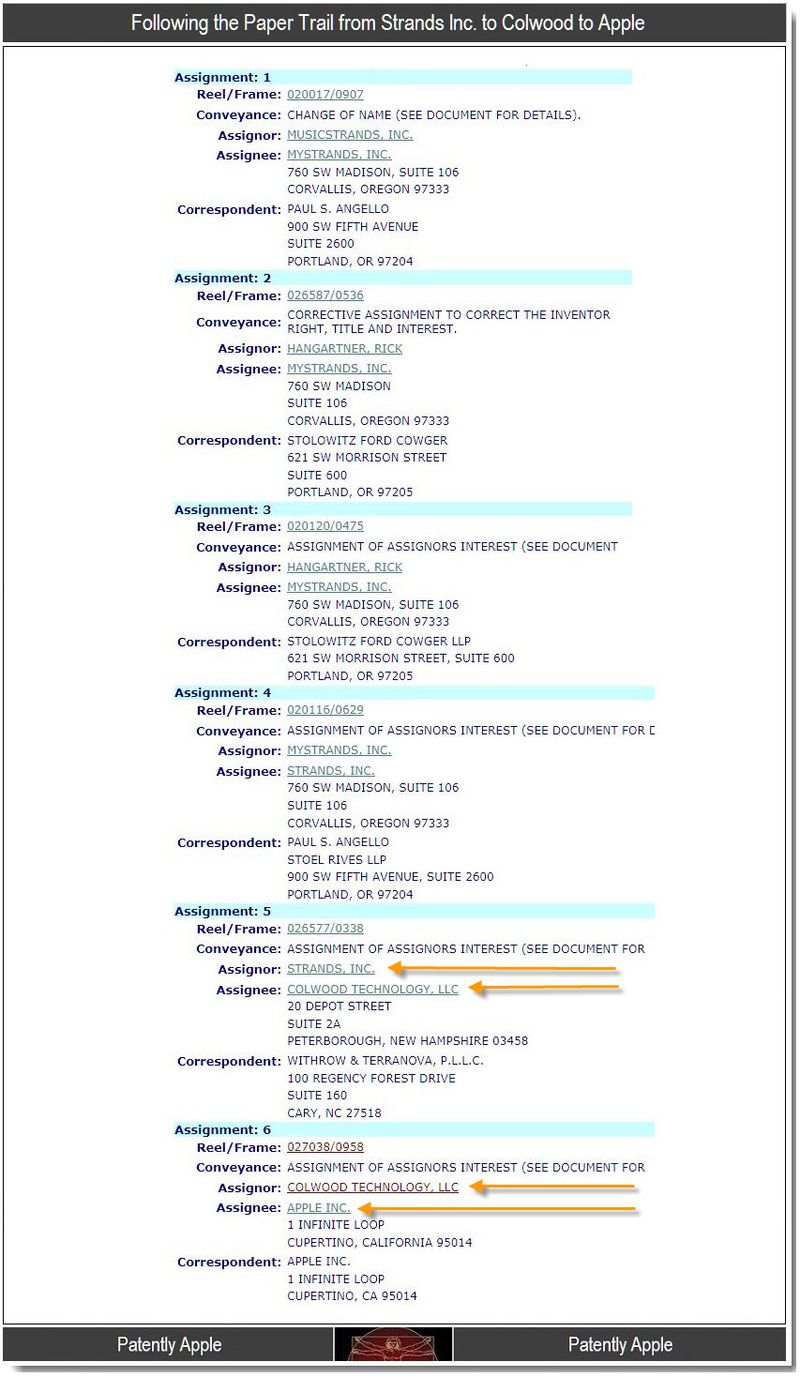 Due to the handling of this acquisition, our source wanted to get the word out to younger inexperienced companies and developers that they should be aware of Apple's cunning tactics should they be approached for their IP.

While that's a fair request, I'm sure that Apple sees this particular case in a completely different light and am equally sure that most developers dealing with Apple are compensated fairly and dealt with uprightly. However, there's no use in sugar coating this either. It's just a fact that large companies are always looking for patents to either protect an existing product of theirs or to inspire future new products that they could bring to market. The business side of a tech company like Apple is no different than any other. They will use whatever legal means and tactics at their disposal to acquire intellectual property that they deem necessary.

In business, a pleasant outcome isn't always assured and I'm sure that it's painful for some who are on the losing end. But it's business. It's not about a broken patent system, as some will cry out in vain, it's just business: the good, the bad and the ugly.

At the end of the day, Strands Inc failed to sell their patents directly to Apple but they were successful at selling their patents to Colwood for no doubt a reasonable profit. Apple, on the other hand, gained a number of key patents that may assist them in their current legal case concerning playlists as well as accelerate possible new and exciting apps to market covering shopping, finance and/or fitness. Time will tell if Apple acquired these patents for offensive or defensive purposes. But for now, it's a done deal.

Is Colwood Technology LLC a front company owned by Apple?

Interesting that you state "why did they sell it to Colwood for that much less?" Where did you see a price in the report?

It would seem to me that it was Strands who was attempting to do the nasty here. If the price to Apple was so important to them that they wouldn't budge on it, why then did they sell it to Colwood for that much less? Perhaps Apple saw that they were being held up, and declined the overinflated price.

I wouldn't be so quick to blame Apple here. My company had 43 patents that we developed. If we had decided to sell them (which we did when we sold the company some years later), we would either have asked a lot, and perhaps not sold them, or asked what they might have been worth, and would have sold them. It's up to the seller to decide what they want. It's up to the buyer to decide if it's worth that much to them.