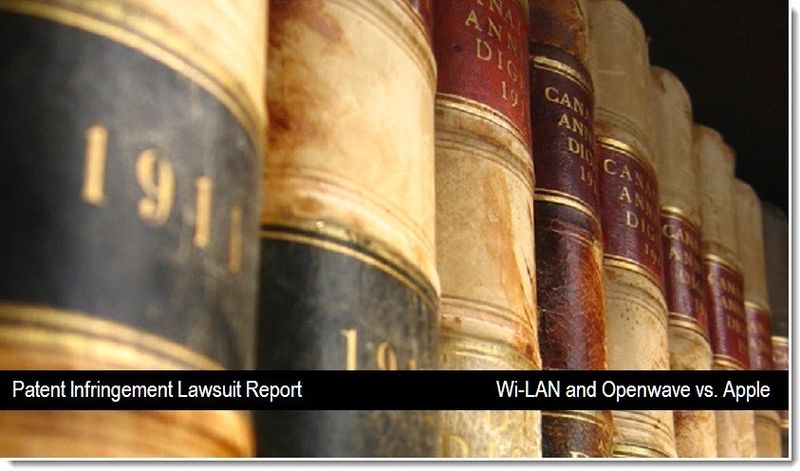 New court documents reveal that both Wi-LAN and Openware have filed patent infringement lawsuits against Apple this week that allege that the iPhone and iPad with 3G violate a list of patents covering such matters as authentication systems, mail and CDMA technologies. Openware's CEO stated in a press release that "Openwave invented technologies that became foundational to the mobile Internet" and believes that large companies like Apple should pay them for the use of their technologies.

According to the official complaint filed with the court, "Apple has been and is now infringing, directly and indirectly by way of inducement and/or contributory infringement, literally and/or under the doctrine of equivalents, the Patents-in-Suit in this District and elsewhere by making, using, offering for sale, importing, and/or selling products compliant with the CDMA2000 standards (including EVDO Rev. A), HSPA standards, IEEE 802.11 standards, and/or LTE standards, that fall within the scope of at least one claim of the Patents-in-Suit ("Apple's Accused Products"). As a result of Apple's infringing activities, users of Apple's Accused Products directly infringe the Patents-in-Suit." Although no product is listed in the complaint, it's obvious that the complaint is focused on Apple's iPhone and iPad with Wi-Fi and 3G.

The Patents listed in Wi-LAN's Complaint

The two patents listed in Wi-LAN's legal complaint against Apple include the following:

The first patent listed in the complaint deals with Wi-LAN's invention under RE37,802 which deals with the field of multiple access communications using Spread Spectrum modulation. Multiple access could be classified as either random access, polling, TDMA, FDMA, CDMA or any combination thereof. Spread Spectrum can be classified as Direct Sequence, Frequency-Hopping or a combination of the two. A key graphic from this patent is noted below.

The second patent listed in the complaint is 5,282,222 which relates to voice and data transmission in wireless communications, and particularly between fixed and portable transmitters and receivers.

One of Wi-LAN's requests to the court is to award Wi-LAN the damages to which it is entitled for Defendants' past infringement and any continuing or future infringement up until the date Defendants are finally and permanently enjoined from further infringement, including both compensatory damages and treble damages for willful infringement.

The others listed as defendants in this case include Alcatel-Lucent, Dell, HP, HTC, Kyocera International, Kyocera Communications, Novatel Wireless and Sierra Wireless. The case was filed in the United States District Court for the Eastern District of Texas, Tyler Division.

According to the official complaint filed with the court, "Apple has infringed and continues to infringe each of the Asserted Patents by engaging in acts constituting infringement, including but not necessarily limited to one or more of making, using, selling and offering to sell, in this District and elsewhere in the United States, and importing into this District and elsewhere in the United States, certain electronic devices, including, but not limited to, Apple's iPhone 3G, 3GS, and 4, iPod Touch and iPad 1 and 2 models of devices for mobile data communication."

Ken Denman, Chief Executive Officer of Openwave  stated in a press release that “Openwave invented technologies that became foundational to the mobile Internet. We believe that these large companies should pay us for the use of our technologies, particularly in light of the substantial revenue these companies have earned from devices that use our intellectual property. Before filing these complaints, we approached both of these companies numerous times in an attempt to negotiate a license of our technology with them and did not receive a substantive response.”

“In the end, litigation is the only way we can defend our rights against these large companies that have effectively refused to license the use of the technologies we invented, are using today, and are continuing to develop for our customers,” Mr. Denman said.

The Patents Listed in the Openwave's Complaint

The five patents listed in Openwave's legal complaint against Apple include the following:

The first patent listed in the complaint is 6,233,608 which relates to user authentication systems over data network systems, and more particularly relates to a method and system for self-provisioning, through a first device, a rendezvous to ensure secure access to managed information in a user account by other devices through the rendezvous in a data network, wherein the rendezvous is generally identified by a URL, the first device, coupled to the data network, runs a first browser under a first communication protocol and the other devices in the same data network run a second browser under a second communication protocol.

The third, fourth and fifth patents listed in the complaint are 6,405,037, 6,430,409 and 6,625,447 which all relate to data communications, and in particular to two-way data communication devices including a cellular telephone, a two-way pager, and a telephone that permit a user to interface with and interact with a server on a computer network. See the key graphic below related to these three patents. 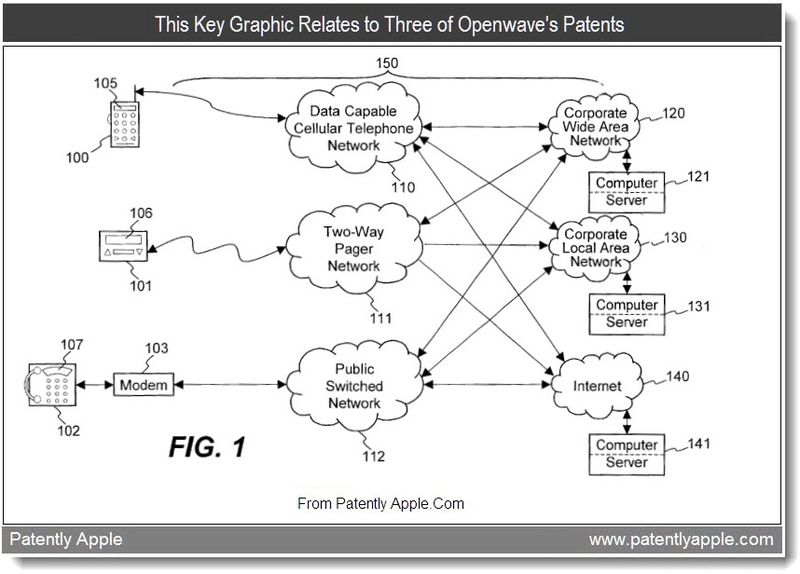 The case was filed in the United States District Court for the Eastern District of Delaware, Wilmington Office. Canada's Research in Motion (RIM) is the other defendant in this case.

Although our comment area for this report is now closed, you could always join in on the conversation over at MacDailyNews who is covering our report.