Hallelujah! Apple's now working on a Video Stabilization Solution for iOS Cameras on the Move 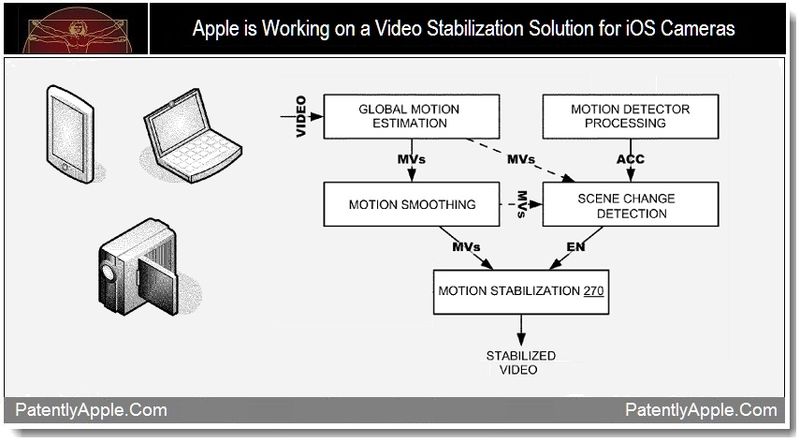 Apple revealed today via a newly published patent application that they have a video stabilization system in the works. The system will be both hardware and software based and hopefully translate into an iMovie editing function. Now that would be both cool and greatly appreciated. I don't know about you, but I've taken a lot of video with my iPhone and the quality is great …until you start moving that is. Without a solid tripod-like solution for the iPhone, the next best thing will be to have a software editing solution. The good news is that Apple seems to have been working on this solution for about two years now, so hopefully we'll have some relief of video jitters sooner rather than later. While it'll never be perfect, especially when you're on the move, anything will be better than the way it currently stands today.

Overview of the Problem

Video stabilization is a class of video processing that removes unwanted shakiness from videos captured from portable camera devices such as smart phones, personal entertainment systems laptop computers and/or camcorder. The goal of video stabilization is to revise an original video sequence to mimic a sequence that would have been obtained if a camera captured the video from an ideal or a specified motion trajectory.

Specifically, video stabilization techniques generate an idealized motion vector of a captured video sequence and then introduce motion compensation to a sequence of captured video to replicate the idealized motion vector. If, for example, a video stabilization algorithm estimated that a video sequence should exhibit no motion (e.g., ideally a camera would have been perfectly still during motion capture), then the motion compensation processes would estimate a global motion vector on each frame and perform processes to remove the global motion.

Although video stabilization could improve the perceptual quality of a video sequence, it has its consequences. First, it could consume considerable resources at a capture device or processing device. Second, it could reduce the field of view of the final video sequence. Third and perhaps most importantly, video stabilization could impair perceived quality if the algorithm generates an incorrect estimate of idealized motion or an incorrect estimate of the source motion vector.

A Look at the Proposed Video Stabilization System

Apple's patent FIG. 1 is a simplified block diagram of a portable video device 100 that could be MacBook an iOS device, or other portable device such a third party video camera. The video device may include a processing system, a camera, and a motion detector such as an accelerometer or gyroscope. The camera may include a lens system and imaging device to convert incident light into a digital data stream. The motion detector may generate electrical data indicating a direction of movement of the mobile device. 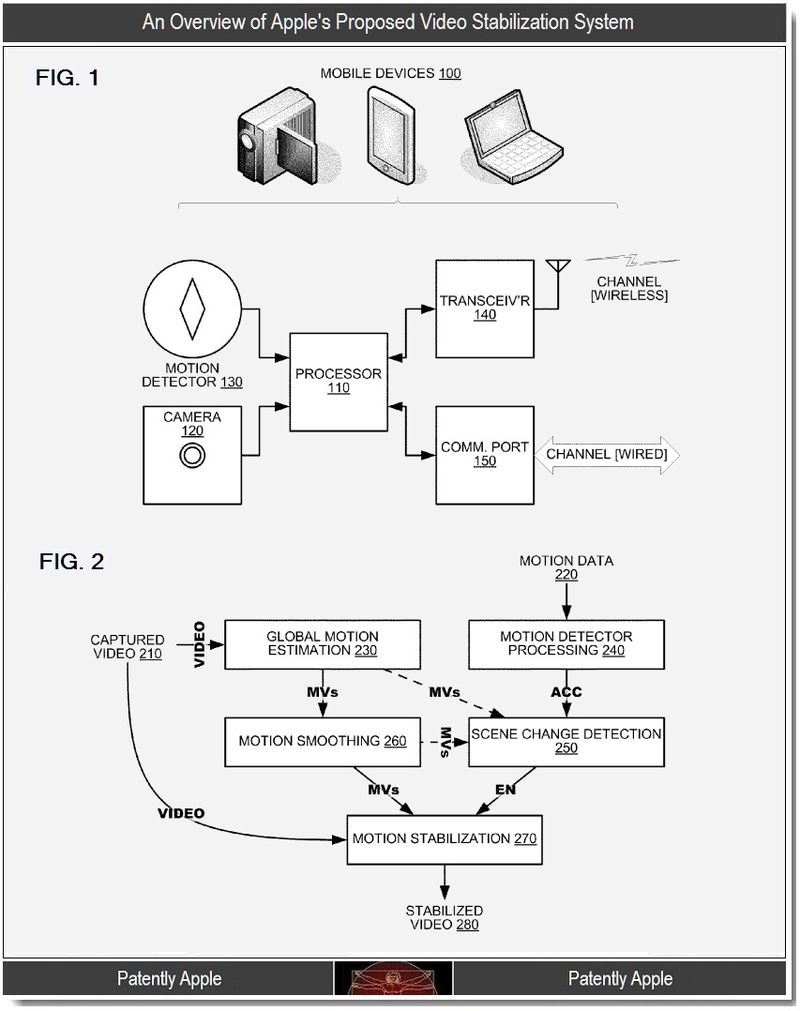 An Overview of the Various Stabilization Stages

Apple's patent FIG. 2 as noted above illustrates a process flow diagram illustrating data flow according to an embodiment of the present invention. In this embodiment, captured video data and motion data may be processed by a global motion estimation stage, a motion detector processing stage, a scene change detection stage, a motion smoothing stage and a motion stabilization stage.

The scene change detector stage may selectively enable and disable operation of the motion stabilization stage based on motion values provided by the motion detector processing stage. 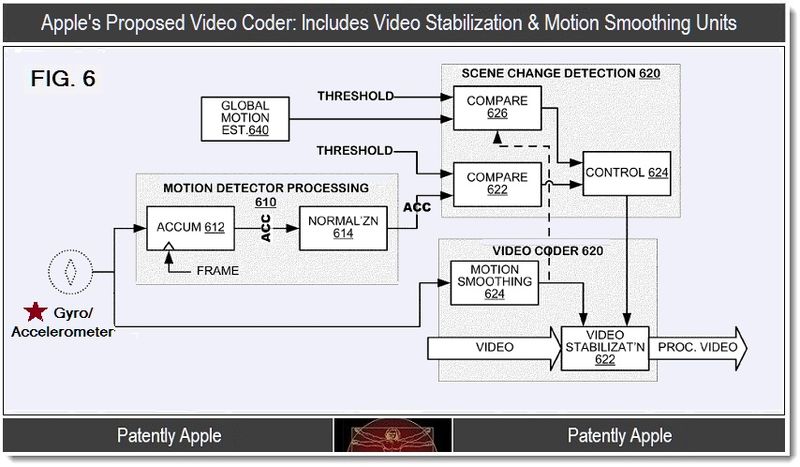 The techniques described in Apple's patent pending invention find application in both software- and hardware-based control systems. In a software-based control system, the functional units described may be implemented on a computer system (commonly, a server, personal computer or mobile computing platform) executing program instructions corresponding to the functional blocks and methods listed in the patent. Hopefully this will translate to being available on iMovie.

The program instructions themselves may be stored in a storage device, such as an electrical, optical or magnetic storage medium, and executed by a processor of the computer system. In a hardware-based system, the functional blocks illustrated above may be provided in dedicated functional units of processing hardware, for example, digital signal processors, application specific integrated circuits, field programmable logic arrays and the like. The processing hardware may include state machines that perform the methods described in the foregoing discussion. The principles of the present invention also find application in hybrid systems of mixed hardware and software designs.

One Last Tiny Patent Pending Innovation to Point Out

I just wanted to point out how something as small as an iOS device earphone Jack gets the royal treatment for design scrutiny in Apple's Labs as does the iPhone. The level of detail outlined in Apple's patent graphics is stunning really. This is patent application ﻿20110237131 titled Audion Connector having Additional Detection Switch. 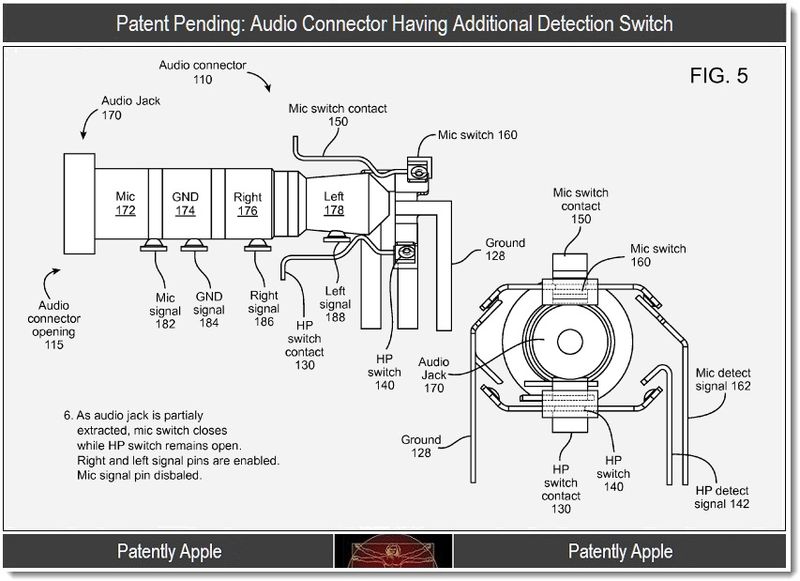 Thanks for the info!