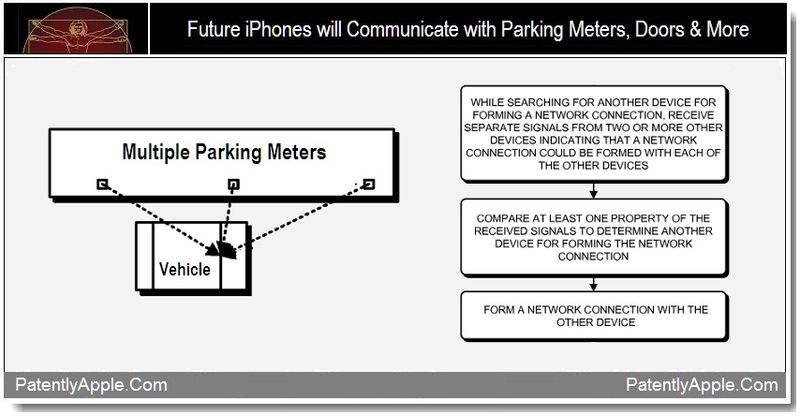 On September 22, 2011, the US Patent & Trademark Office published a patent application from Apple that reveals how future iPhones and other Apple devices will be able to effortlessly communicate with everyday electronic devices like a downtown parking meter, a garage or home door, a grocery store cash register or a stereo component. Apple first established some of these future functionalities, such as using the iPhone as an electronic key or working with in-home devices back in early 2010 working with NFC. Then last week a new Apple patent application revealed how the iPhone could adopt RFID circuitry and reader to perform some of the very same noted tasks. In today's revelations, Apple states that they'll adopt a host of other wireless technology standards to enable the iPhone to communicate with all of tomorrow's smart devices. Apple is preparing future iPhones to work as an electronic wallet and in doing so must ensure that it'll work on any given wireless network that a retailer or city service implements. In the big picture, Apple now has all of their bases covered. The next step will be introducing iWallet capabilities into a future iPhone that will take e-commerce to the next level.

In various mini scenarios presented in Apple's patent application, a user of an electronic device such as an iPhone will want to effortlessly form a network connection with one of two or more nearby devices in the future for identifying the user and/or enabling a feature of the other device. Upon forming the network connection, the iPhone will be able to exchange identification information and commands with the device with which the network connection is being formed for performing corresponding operations. This could, for example, be in a parking garage, at a computerized cash register at a grocery store, at home (as a garage door opener or a front door key), etc. 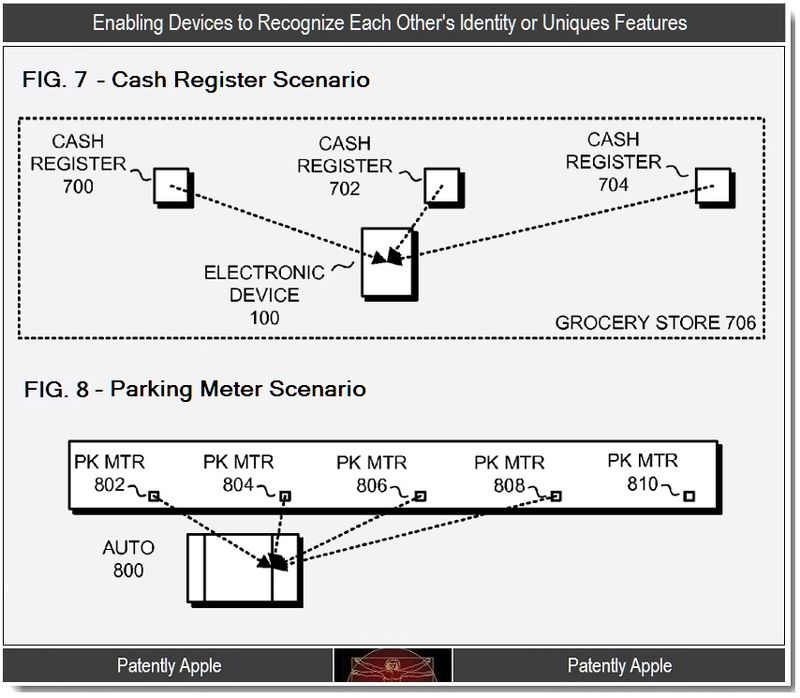 As another example, Apple's patent FIG. 8 shown above presents a block diagram illustrating a Bluetooth-enabled automobile 800 near a number of Bluetooth-enabled parking meters (PK MTR) 802-810. In this exemplary embodiment, the automobile could form a Bluetooth connection with a nearby parking meter for identifying itself and paying a fee associated with parking in the corresponding parking space. As with the examples above, there are typically numerous parking meters within effective radio range of one another. Thus, these embodiments could use received signal strength to determine a parking meter with which a network connection is to be formed. In addition, these embodiments could also use one or more contextual values (location, heading, etc.) to assist in making the determination of a parking meter for forming the network connection.

General Overview of the System

The following information is a simple overview of some the key components associated with Apple's invention. 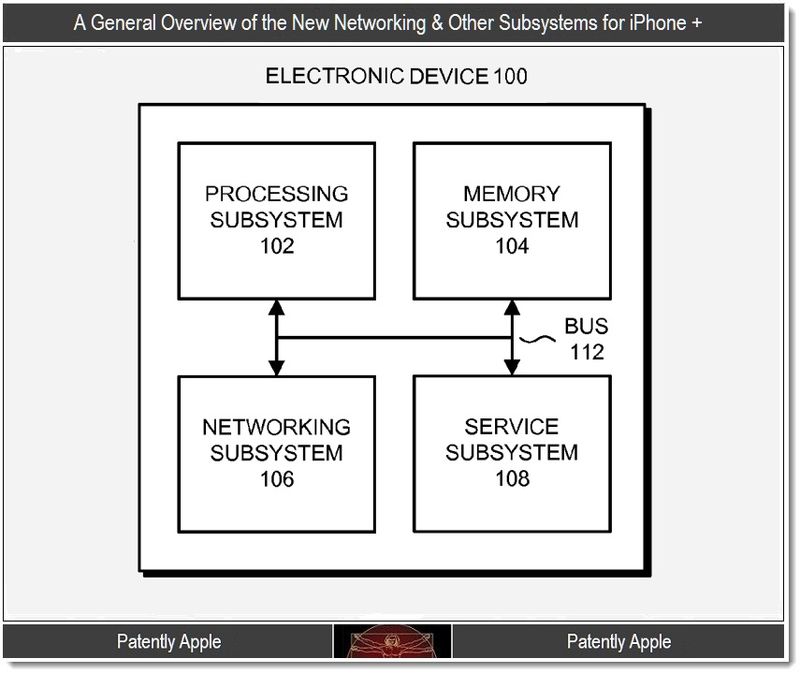 As another example, the service subsystem could include one or more sensing systems; each coupled to one or more sensors for sensing external and/or internal conditions for tracking a current, past, or projected future state for the electronic device. The service subsystem could include sensors such as accelerometers, compasses, tilt/rotation detectors, thermometers, ambient light sensors, atmospheric pressure sensors (barometers), cameras, microphones, and/or timers/clocks.

Overview of the Applicable Devices

While the subsystems presented will apply to OS X and iOS, in general, the system will be able to play nicely with Windows or Windows Mobile (or likely Win 8) and Google's Android where a file transfer and/or a service discovery application applies.

Apple's patent application that was published today was originally filed in Q1 2010 by inventor Vevrim Vargolu.

In Other IP News

It was only a matter of time, soon everything around you will be controlled by your mobile device - I'm not sure so much dependancy on one device can be a good thing, I guess time will tell.