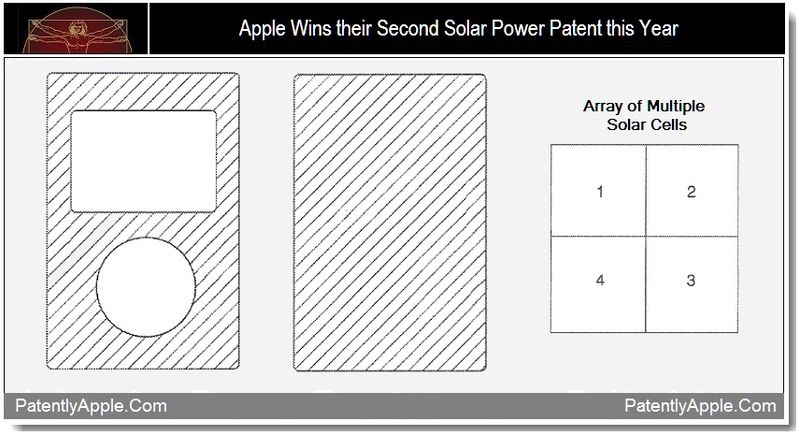 The US Patent and Trademark Office officially published a series of 20 newly granted patents for Apple Inc. today. This morning's report covers patent wins relating to icon designs, assembly methods for the iPod and the iPod's capacitance sensing electrode based clickwheel. Yet the patent standing out amongst them all this morning relates to future solar powered portables and the power management circuitry that'll make it all happen. This is Apple's second major solar related patent win for 2011. While this technology may take another five to ten years to come to market, Apple is amongst a growing list of tech companies that are in a race to power portable devices like smartphones and notebooks with solar energy as one of their key power sources.

Apple has received a Granted Patent relating to power management circuitry and solar cells. It's Apple's second solar power related patent win this year. Apple's iPhone patents began to roll out in 2000 and the actual iPhone came to market in 2007. That same type of patience will be required to see integrated solar technology come to market.

The good news is that serious work has already begun on this front. Evidence of this came via two Intel demos during last week's IDF in San Francisco. Otellini forecasted future platform power innovation reaching levels that are difficult to imagine today. The solar cell that Intel demonstrated only measured about the size of a postage stamp.

While it will be a few years down the road before this ever meaningfully reaches the market, a company by the name of Nanosolar, who is mentioned in Apple's patent, lists a number of tech companies already working to bring this technology to market: ARM, Cisco, HP, National Semiconductor, 3Com, BMW, Siemens and more.

Until such time arrives, there are some ingenious Apple developers that are already offering Macites an iPhone case that supports solar power. 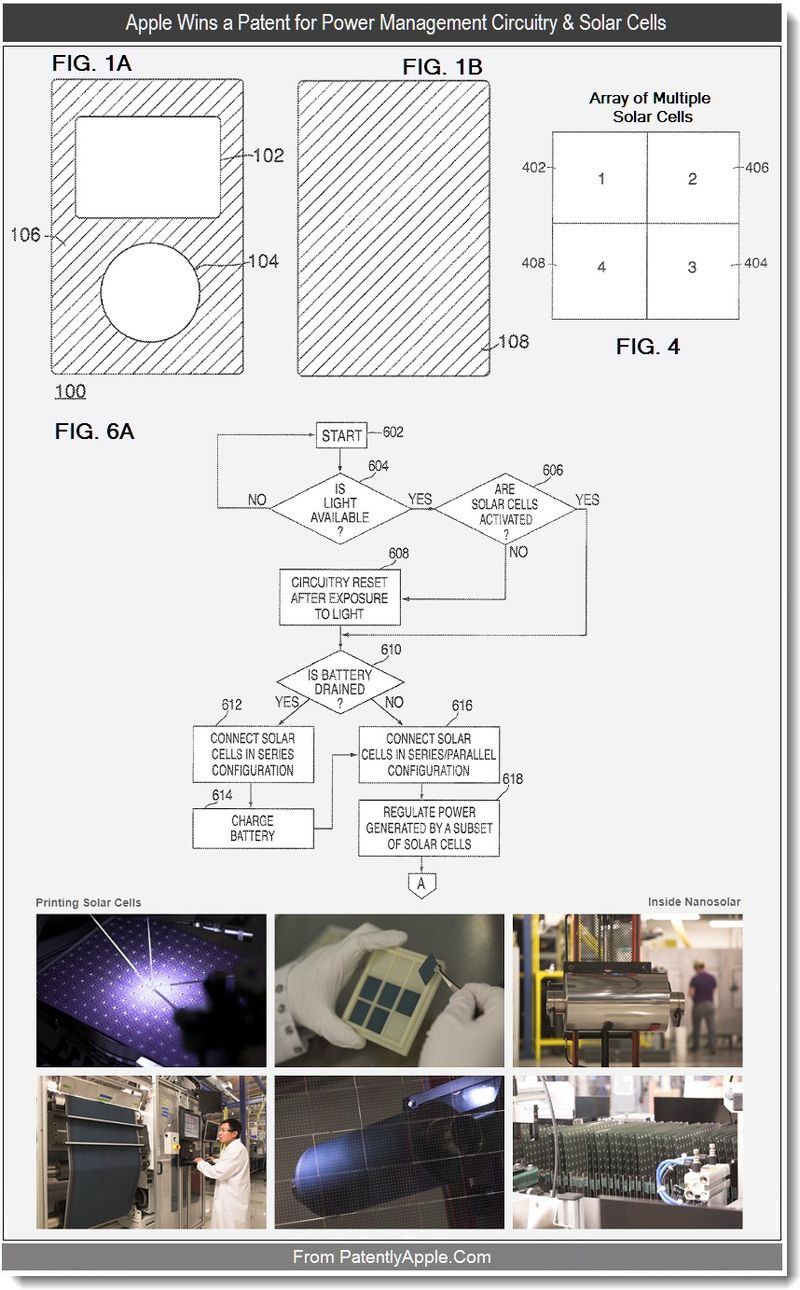 As shown in Apple's patent FIGS. 1A and 1B above, solar cells 106 and 108 could be placed on the front and back sides of portable electronic device 100, respectively. Each solar cell could be an integrated component, external device, or any part of a component of the device, which is capable of converting light energy into electric energy.

While this particular solar cell related patent focuses mainly on portable devices such as the iPod, iPod Shuffle and iPhone – the patent does in fact briefly mention that the technology could extend to displays and televisions as well.

To review Apple's other 24 patent claims and invention detailing, see granted patent 8,022,571. Apple credits Daniel Warren and Michael Rosenblatt as the inventors of this patent which was originally filed in Q3 2008. The original patent application was filed in January 2010. For more on Apple's green technology patents see our archives, Tech: Green.

Update # 1: MacRumors has posted a new report revealing that Apple has registered the domain iPodsolar.com. Now how's that for timing. Update # 2: Please note that this is actually Apple's third solar patent of the year. The second one of the year was granted on August 23rd.

Apple has received another Granted Patent relating to the iPod's capacitive sensing Clickwheel. Three other clickwheel related patents were awarded to Apple in May 2010. 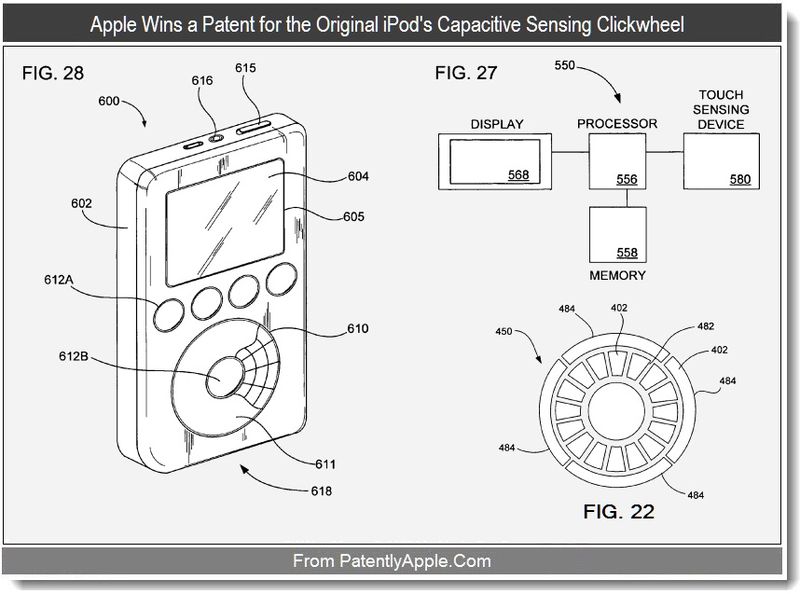 To review Apple's other 39 patent claims and invention detailing, see granted patent 8,022,935. Apple credits Steve Hotelling as the sole inventor of this patent. The original iPod debuted in 2001. The dates relating to this patent range from 2002-2005. The official date shown on this particular granted patent is 2005, though it incorporates other patents listed in this document.

Apple has been Granted Patents for the method of assembly relating to both the iPod Classic and iPod nano. 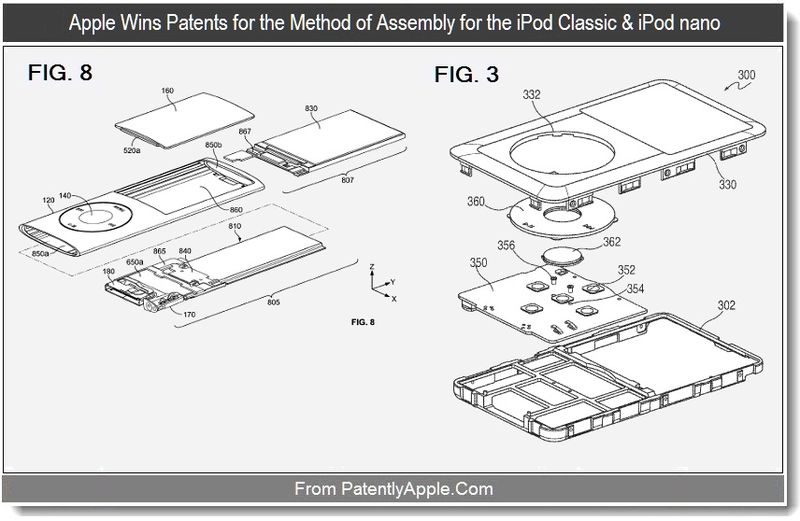 Apple's First Claim relating to the iPod Classic: An electronic device having a display region, comprising: a bezel comprising a planar portion having an opening at the display region and a plurality of walls stepped vertically from an outer periphery of the planar portion, the bezel forming an edge about the perimeter of the opening, the edge comprising a first chamfered portion angled from an exterior surface of the bezel at the perimeter away from the opening and from the exterior surface of the bezel; a window positioned at the display region, the window comprising a boundary about its perimeter, the boundary comprising a second chamfered portion operative to mate with the first chamfered portion; and a frame operative to support components of the electronic device, wherein the plurality of walls are operative to surround and engage the frame. 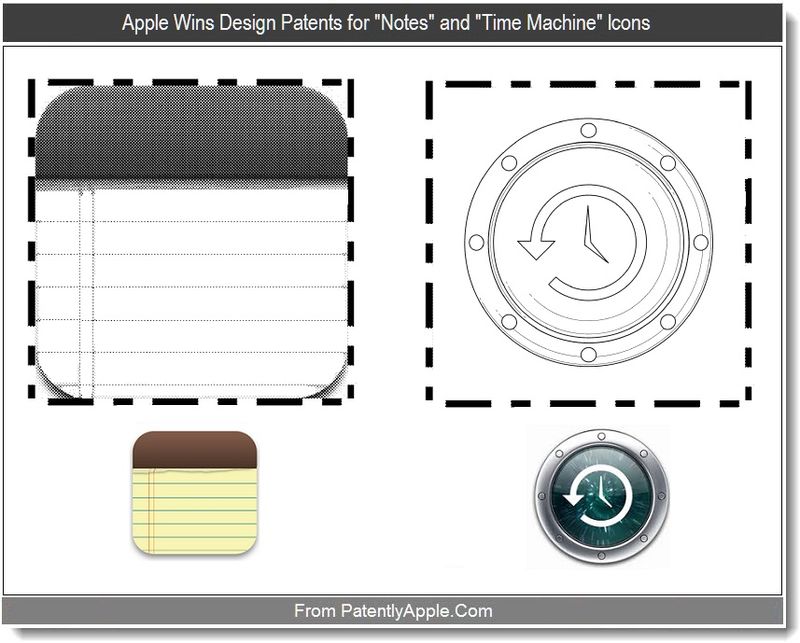 Notice: Patently Apple presents only a brief summary of granted patents with associated graphics for journalistic news purposes as each Granted Patent is revealed by the U.S. Patent & Trademark Office. Readers are cautioned that the full text of any Granted Patent should be read in its entirety for full details. About Comments:Patently Apple reserves the right to post, dismiss or edit comments.

Here are a Few Community Sites covering our Original Report