On the first day of September 2011, the US Patent & Trademark Office published a patent application from Apple that reveals one of the possible next chapters for Apple's iPhone and iPad. While Apple's patent delves deeply into a new composite that will include a foam substrate formed of a plurality of foam cells, it's the intent behind this that's revealing. The new composite would accommodate a new antenna window for Apple's iPhone and iPad formed of RF transparent materials. As shown in our cover graphic, the new antenna window could take up as much as half the backside of an iPhone. The proposed antenna window would have a seamless backside line that would almost be invisible. The new antenna window design obviously departs from the iPhone 4's stainless steel antenna band which has been so controversial.

Consumer products occasionally require the attachment of parts that while not essential to the operation of the consumer electronic product, still must conform to the overall aesthetic look and feel of the product as a whole. It would be of little benefit for a manufacturer to expend a large amount of resources in both time and money in developing an aesthetically pleasing consumer product that with the addition of a minor cosmetic part degrades the overall look and feel of the product. Most consumers would tend to focus on any small imperfection that could result in an overall degradation in their appreciation of the product.

For example, the overall fit and finish of the product could be as almost an important factor to a consumer's appreciation of a product as the functionality of the product itself. Therefore, it is essential that any cosmetic part attached to a consumer product, especially to that portion of the consumer product that is readily visible, be attached in such a way as to appear that the cosmetic part is part of the whole and not added on.

Therefore, an improved manner of attaching a cosmetic part to a consumer product is desired that is strong, easily practiced, and results in a fit and finish that enhances the overall look and feel of the product.

Broadly speaking, Apple's invention describes a composite that includes at least a foam substrate formed of a plurality of foam cells. In one embodiment at least one liquid adhesive could be uniformly distributed throughout the plurality of foam cells. In some cases, the foam substrate could be impregnated with more than one species of adhesive uniformly distributed throughout the foam substrate. In this way the different species of adhesive could cooperate to provide the composite with compound properties that could work in synergy with each other.

One of the many advantages to the composite is that there is essentially no post cure shrinkage of the composite as compared to the post cure shrinkage evident when adhesive alone is used. Therefore, the composite could provide a well controlled and easy to use approach to bonding parts together in a cosmetically appealing manner. The composite is also well suited for attaching features to small form factor electronic devices. The features could include for example, an antenna window attached to a housing of the small form factor electronic device.

Apple's patent FIG. 1 shows a representative cross section 100 of composite 102 formed of open cell foam substrate 104 having foam cells 106 most of which are filled, or at least substantially filled, with liquid adhesive 108. In order to provide a uniform and strong bond, the distribution of liquid adhesive throughout the foam substrate is made essentially uniform by impregnating a substantial portion of the foam substrate with a single species adhesive. The composite is well suited for bonding together pieces of small form factor consumer products that require both a strong bond and an esthetically and cosmetically pleasing reveal. 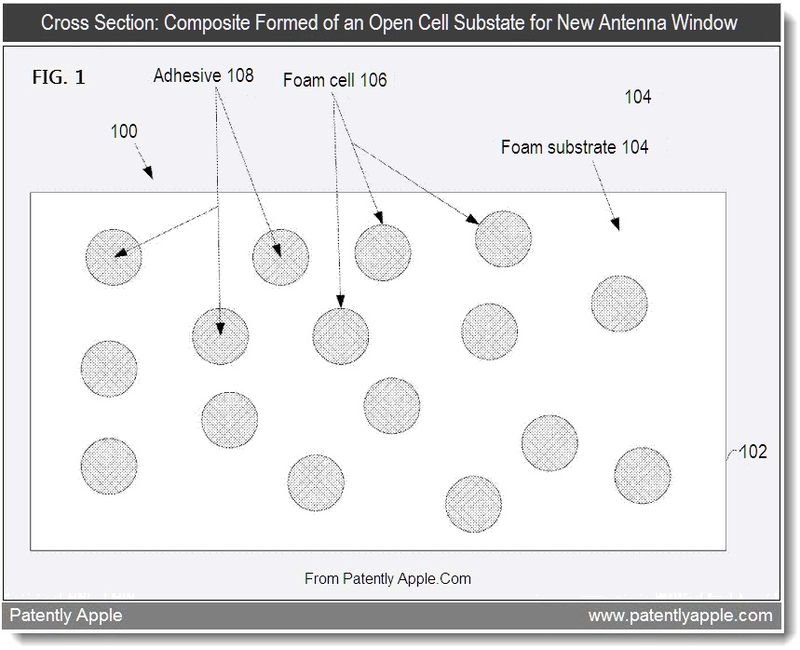 This is particularly important in those products that place a high premium on presenting a clean look and uniformly smooth feel to the user such as in small form factor consumer products where even a small imperfection can substantially detract from a user's overall experience. The adhesive nature of the composite could be used to bond a number of parts together to form an aesthetically pleasing assembly exhibiting essentially no reveals, lines or other joining related visual or tactile artifacts. In this way, an accessory or other structural feature could be joined to a housing of a small form factor consumer product using this composite without leaving tell tale evidence of the joining, either visual or tactile.

Apple's patent FIG. 2 shown below illustrates a cross section of housing 200 onto which the composite is used to attach a representative feature. For example, the housing could be used to enclose and support operational components of a portable communication device such as an iPhone or iPad. The housing could be configured to accommodate features having ornamental and/or functional aspects. 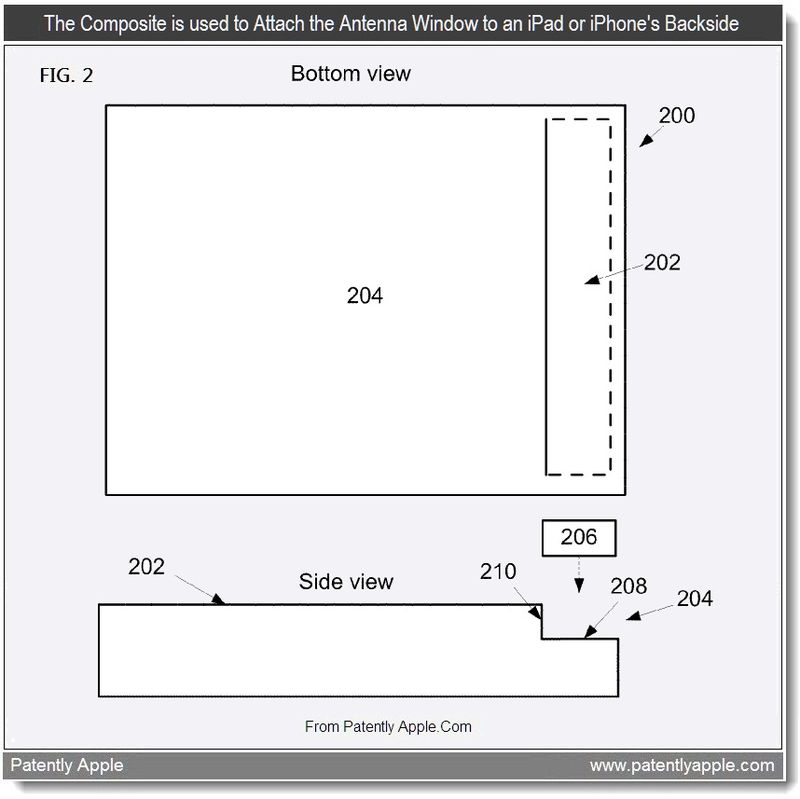 When the housing is formed of metal and is used to enclose at least some operational components that the portable communication device (such as an RF antenna) that support RF based functionality, it is advantageous to remove a portion of this housing to form recess 202. This recess could include part of bottom surface 204 of the housing. The recess could be sized to accommodate a feature formed of RF transparent materials such as ceramic, or plastic. Accordingly, the recess could be formed in close proximity to an RF antenna enclosed within the housing used to send and receive RF energy. Therefore, in order to minimize RF signal degradation caused by the presence of the metal housing, the recess could be replaced with feature 206, formed of radio transparent material, commonly referred to as an antenna window.

However, in order to assure both the integrity of the housing as well as the aesthetic look and feel of the housing, the reveal formed at the junctions of the antenna window with the bottom surface and exposed surfaces 208 and 210 of the housing must be structurally strong and resilient but also present a sense of both visual and tangible continuity between the housing and antenna window.

Attaching the Antenna Window to the Device's Housing

Apple's patent FIGS. 3 and 4 show a particular approach that could be used to attach the antenna window to the housing at the recess using the composite that results in a cosmetically appealing reveal. 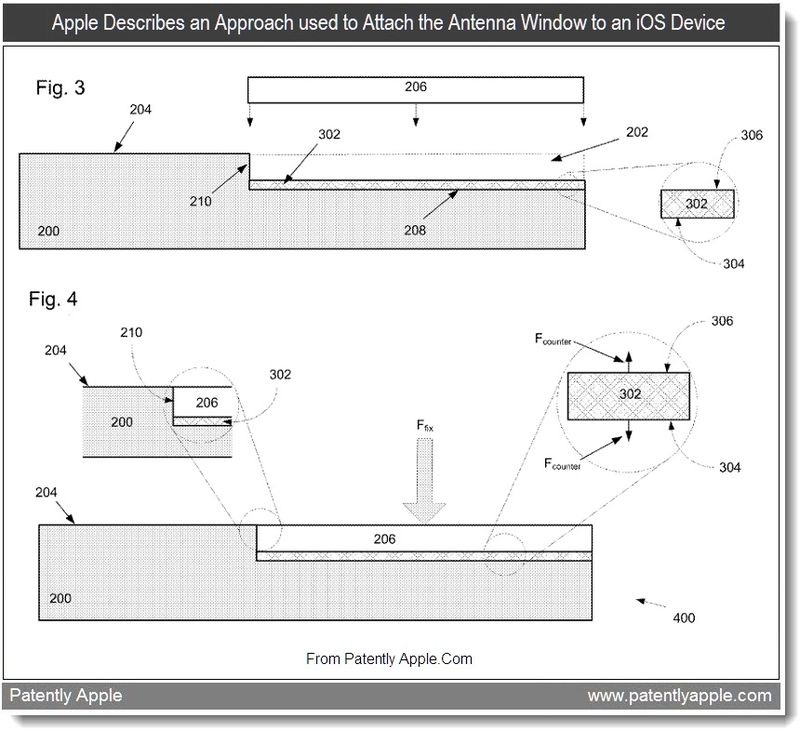 More particularly, Apple's patent FIG. 3 shows some initial steps that could be taken to attach the antenna window to the housing using composite portion 302. Firstly, this composite portion could be shaped and sized for direct placement upon exposed surface 208. In some cases, the portion could have the first surface (304) that could be shaped to essentially mirror the contours of exposed surface 208 onto which it will be placed in direct contact.

Apple's patent briefly touches on this composite being used in other applications such a "docking mechanism associated with a portable media player." If this new composite works out on a future iPhone or iPad, it appears that Apple is already thinking of future applications. That's always a good sign that the process is likely already been proven.

Apple has kicked around a few other antenna ideas over the last 22 months including one that would utilize an antenna clip, another using a logo antenna and lastly one that would use a push button antenna system. I like the current design or an automated version of the push button design. Think of the antenna rising only when you answer a call and automatically retracting when the call ends. Apple didn't go that far in their design but should have. That said, those are my choices and I wonder which ones you favor. Send in your comments and/or ideas describing the ideal iPhone antenna system.

While we're on the topic of new composites, Apple has published a seemingly minor patent titled "Composite Laminate Having An Improved Cosmetic Surface And Method Of Making Same," under application 20110210476. The new patent application covers aspects of a new composite for lighter materials for future devices which has already been granted a patent a year ago. Here's another related patent application.

Another mildly interesting patent titled "Integrated Frame Battery Cell" surfaced this morning under number 20110210954. It appears to simply cover that which is already in use. The patent illustration is very close to one seen in a recent iFixit Teardown.  But if you want to check it out to be sure, then feed the patent number above into this search engine. 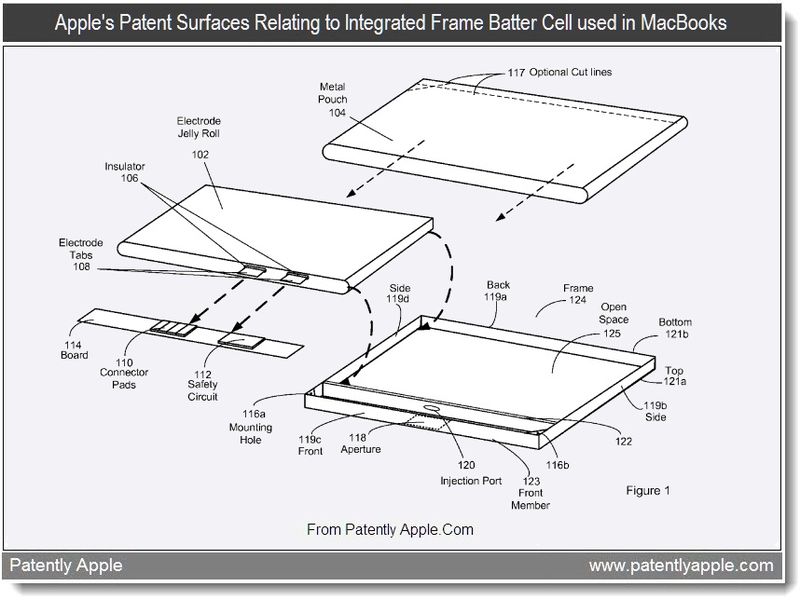 I think that Apple should license antenna technology from Moto or is that Google now? My faithful moto phone never gave me reception problems like those I get with my iphone. It's just a thought so don't go flaming me now.

I like the automated antenna idea you describe that's partially based on a patent application but think that in the long run more moving parts spells repair bills.

The current one with a huge backside antenna area is my choice. I don't always get the best reception with my iPhone 4. Anytime I run into a wifi hotspot, the ones I'm speaking to constantly tell me that they have trouble hearing me. So the bigger the antenna area the better for me.