Apple is working a new Hybrid Drive System of their Own 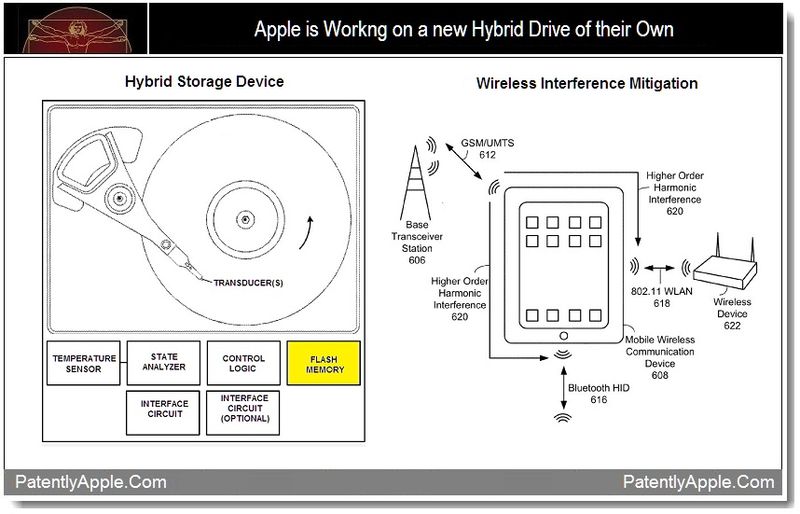 On September 29, 2011, the US Patent & Trademark Office published a patent application from Apple that reveals a next generation Hybrid Drive that includes both a hard drive and Flash. Intel will be pushing their Smart Response hybrid drive systems for consumer systems in 2012 and Apple's patent would indicate that they intend to have their own solution for future hardware. Uniquely Apple's twist to this drive is that it will handle different types of storage media based on an environmental state of the hybrid drive. If the drive undergoes temperature, vibration or acceleration variances that could cause the hard drive to temporarily fail, the system would save the volatile data to the Flash drive.

Overview of the Current HDD Problems

While hard-disk drives (HDDs) are capable of storing large amounts of data at a low cost per byte, they could be sensitive to environmental conditions. In particular, operation of modern HDDs involves accurately maintaining the vertical and horizontal positions of read and write transducers within a few nanometers of a disk that is spinning at a rotational velocity in excess of 10,000 rpm. In addition, as the aerial density in HDDs increases, the current density in the read transducers increases, and the magnetic volume associated with a bit stored on the disk decreases. These design changes increase the sensitivity of HDDs to potential effects associated with ambient temperature and the thermal energy dissipated by HDDs, including: thermal runaway, electro-migration and superparamagnetism.

As a consequence, HDDs are increasingly sensitive to environmental conditions, such as changes in temperature, vibration and acceleration, which can disrupt operation of an HDD, and can result in HDD failure and/or loss of data. In turn, these limitations could adversely impact the performance of systems (such as computer systems) that include HDDs, and could necessitate additional data and storage-device redundancy that could increase the complexity and cost of these systems. 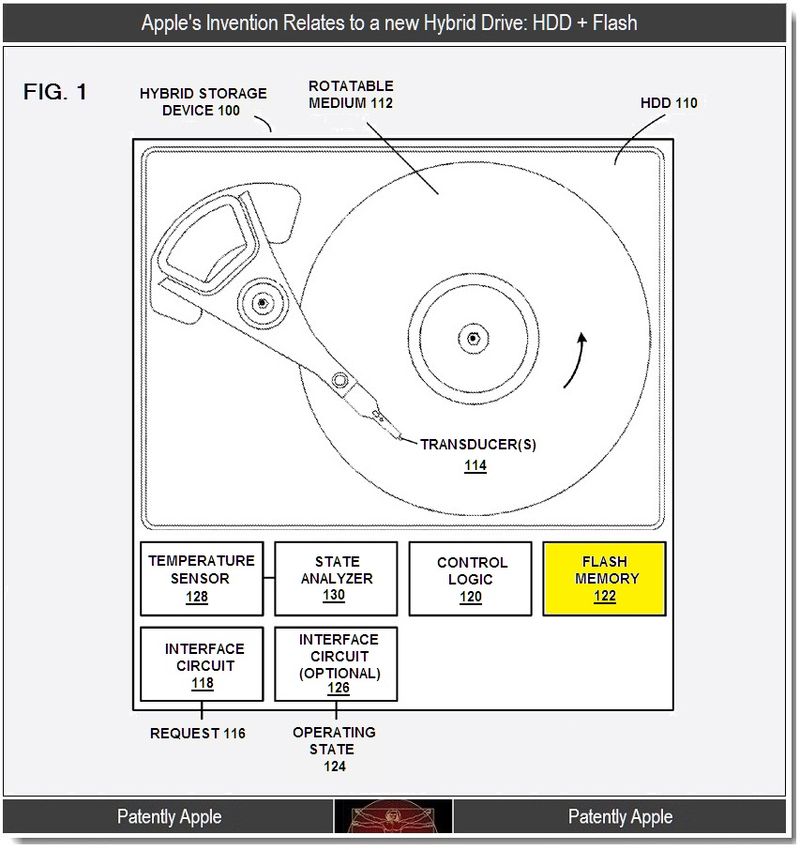 During Intel's Spring IDF 2011 they revealed that they were working on a technology called Smart Response which is basically describing a hybrid drive. The system is to include a typical large Hard Drive for mass storage while including a Solid State Drive (SSD) to allow the OS, favorite apps and essential services to ramp up extremely fast to provide users with a faster and more responsive system. Though technically, a hybrid drive could simply utilize Flash memory and not necessarily in the form of a SSD like what Apple is proposing. 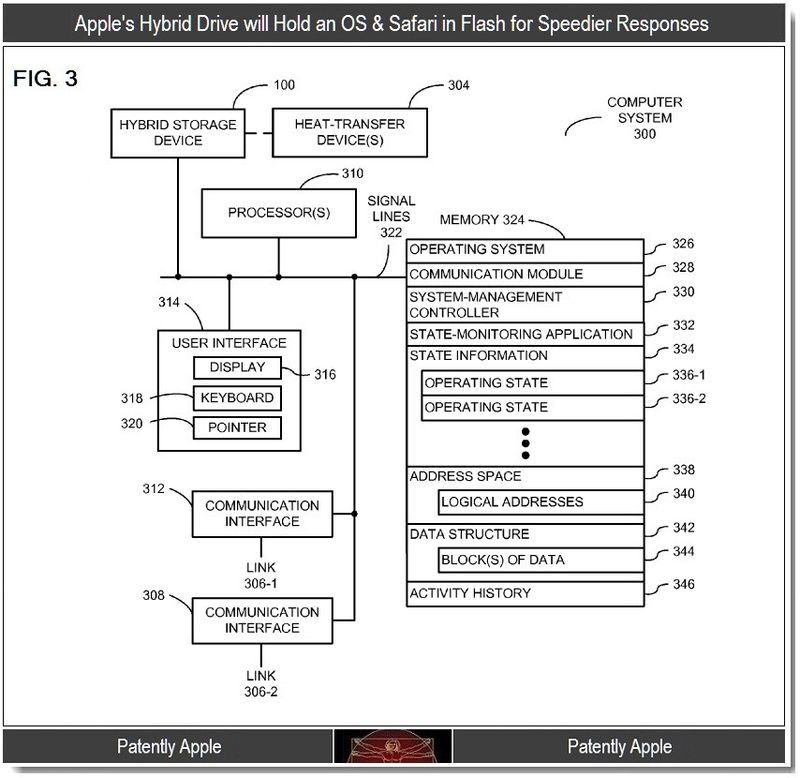 While Apple's Hybrid covers handling environmental issue solutions, they do mention that "memory (noted as # 324 above) may store an operating system that includes procedures (or a set of instructions) for handling various basic system services for performing hardware-dependent tasks. While not explicitly indicated in computer system 300, in some embodiments the operating system includes a web browser, such as: Internet Explorer (from Microsoft Corporation, of Redmond, Wash.), Safari (from Apple Inc., of Cupertino, Calif.), and/or Firefox (from the Mozilla Foundation, of Mountain View, Calif.)." It's not uncommon for Apple to include mention of competing products in their patents should they be licensed further down the road.

Wikipedia confirms that "A hybrid drive combines the features of an HDD and an SSD into one unit, containing a large HDD, with a smaller SSD cache to improve performance of frequently accessed files. These could offer near-SSD performance in most applications (such as system startup and loading applications) at a lower price than an SSD."

So while Apple appears to suppress the infomation of their hybrid drive's ability to speed up processes in a computer system, the fact is that what they're actually describing is the very definition of why hybrid drives are implemented in the first place.

Intel's Smart Response is debuting only on Extreme i7 systems for gamers late this year. It's likely to move to mainstream systems in 2012 when Ivy Bridge rolls around. The image that Intel provided at IDF 2011 in relation to a hybrid drive or "Smart Response" system was a consumer all-in-one desktop. So the race is on for hybrid drives in 2012 and beyond and it's nice to know that Apple has their own solution in the pipeline. The funny thing is that Apple's systems are already lightning fast at start-up when compared to competing Intel systems from Dell or others. I can't even imagine how much quicker Apple's devices could get in the future. Though who's complaining, right?

In a patent application titled "Wireless Interference Mitigation" Apple lays out what their new invention addresses: "Isolation between a transmitter and a receiver co-located in the same mobile wireless communication device could use specific antenna design, shielding, filtering and placement to minimize receiving interfering radio frequency power in one receiving antenna from another transmitting antenna. Current mobile wireless communication devices could be quite compact in size, and the maximum physical distance possible on such small devices between a transmitter and receiver could limit the amount of radiated radio frequency power loss resulting from antenna placement. Thus there exists a need for a method to mitigate interference between radio frequency transceivers placed in the same mobile wireless communications device. 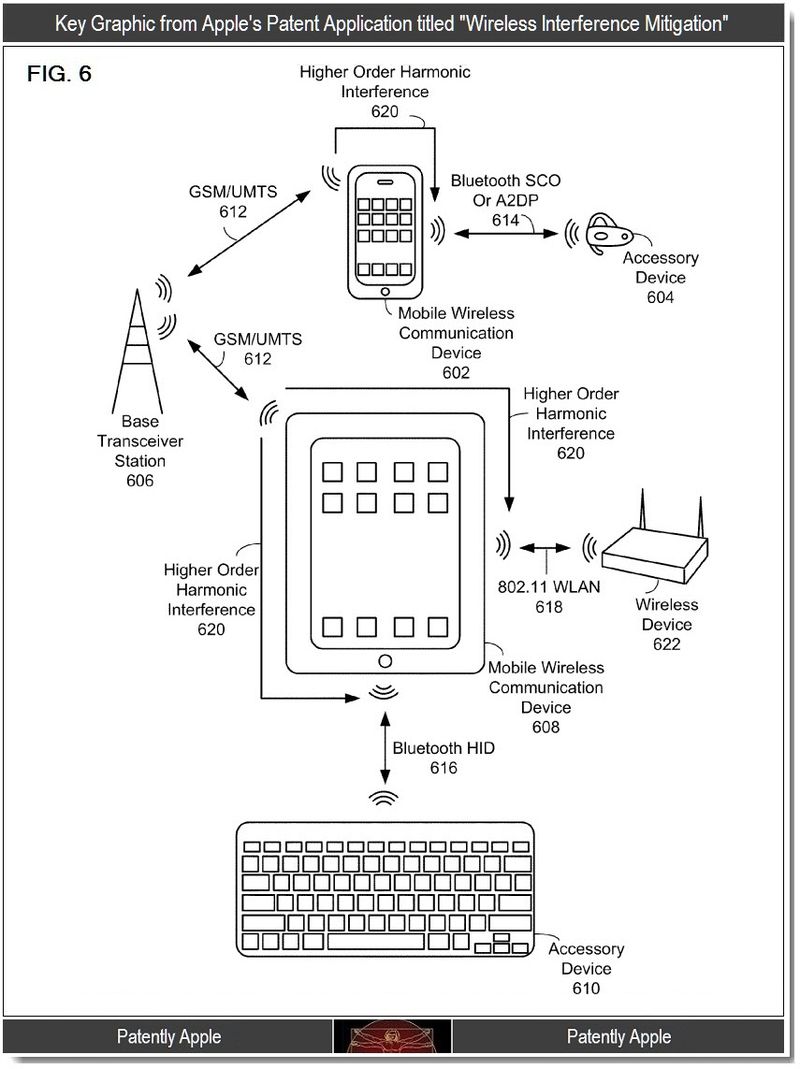 “…operation of modern HDDs involves … a disk that is spinning in excess of 10,000 rpm.”
Sure wish that were true. The fastest 1TB I could find for my laptop a few months back was 5400 rpm. It's a big step backwards from the 7200 rpm high-capacity drive I had.

This functionality, whether embedded in the disk drive itself or on the motherboard, could make a *HUGE* difference in speed of most disk-intensive work. I'd LOVE to see it

The argument for a hybrid is a good one. This concept of having everything of yours in the cloud isn't going to be cheap if you want your 300GB to 1TB of data with you at all times. Your scenario is good for socialite-users but not for everyone. So the hybrid serves the needs of business users and those in the arts.

Not everyone wants an SSD for a TB, which they don't even make yet and I can't imagine the insane cost they'll be initially. There isn't one solution yet and the hybrid drive is an answer for many who have large storage needs. So it really depends on where you're coming from.

This may never happen. SSD has gotten cheaper much faster than was previously thought, and users have shown they will pay a large premium on a device that is much smaller and lighter and more reliable because it has no moving parts.

The majority of Apple PC's sold today are already pure SSD. 100% of iPads and about 60% of Macs. iCloud launches in a week. That makes even less need for slow local storage. You replace the HD with SSD, and if there is an optical drive, replace it with HD. Done. That is your transition. Later, take out the HD. If you want to make them appear to be one drive, the operating system can do that.

Simply a transition phase between HDD and SSD.... Kind of annoying, but it's getting us closer at least.