The US Patent and Trademark Office officially published a series of 16 newly granted patents for Apple Inc. today. In our first granted patent report of the day you'll learn about newly granted patents covering a solar power converter, an iOS camera related patent detailing the rotation of display orientation of a captured image, a third patent covering a 3D Video Viewer that was meant for iMovie and a couple of iPhone docking station patents that illustrate features that have yet to surface.

Apple has been Granted their Second Solar Power Related Patent

If you use your iPhone or iPad a lot outdoors then you know that you could use every bit of energy possible to keep your devices running longer. Well, Apple has won their second solar-power related patent for methods and apparatuses for operating devices with solar power. While it may take a few more years to materialize, relief appears to be on the horizon. 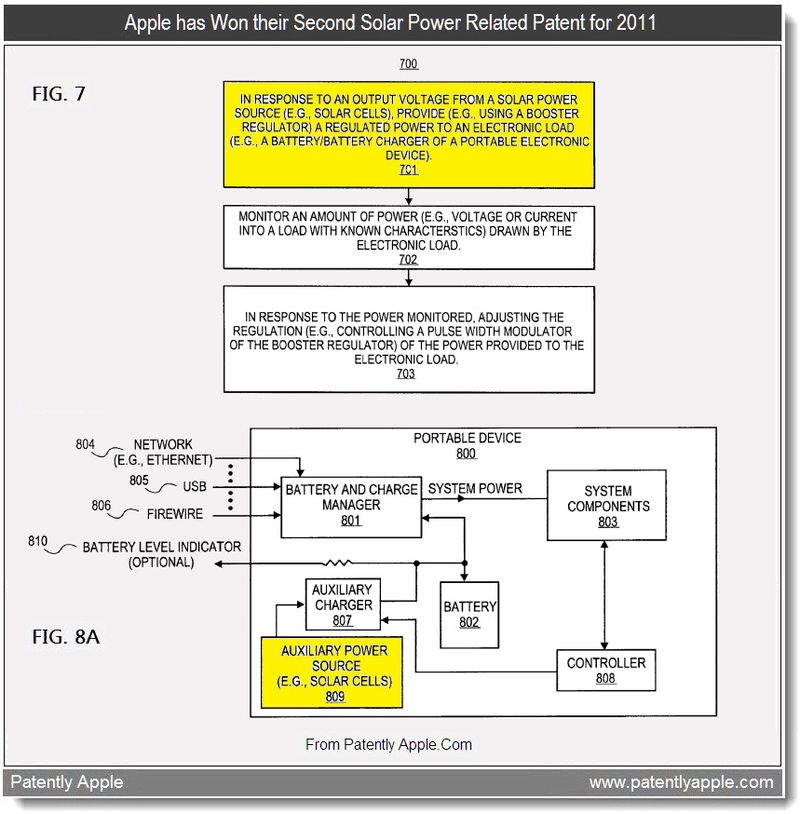 Apple is Granted a Patent Relating to iOS Device Cameras 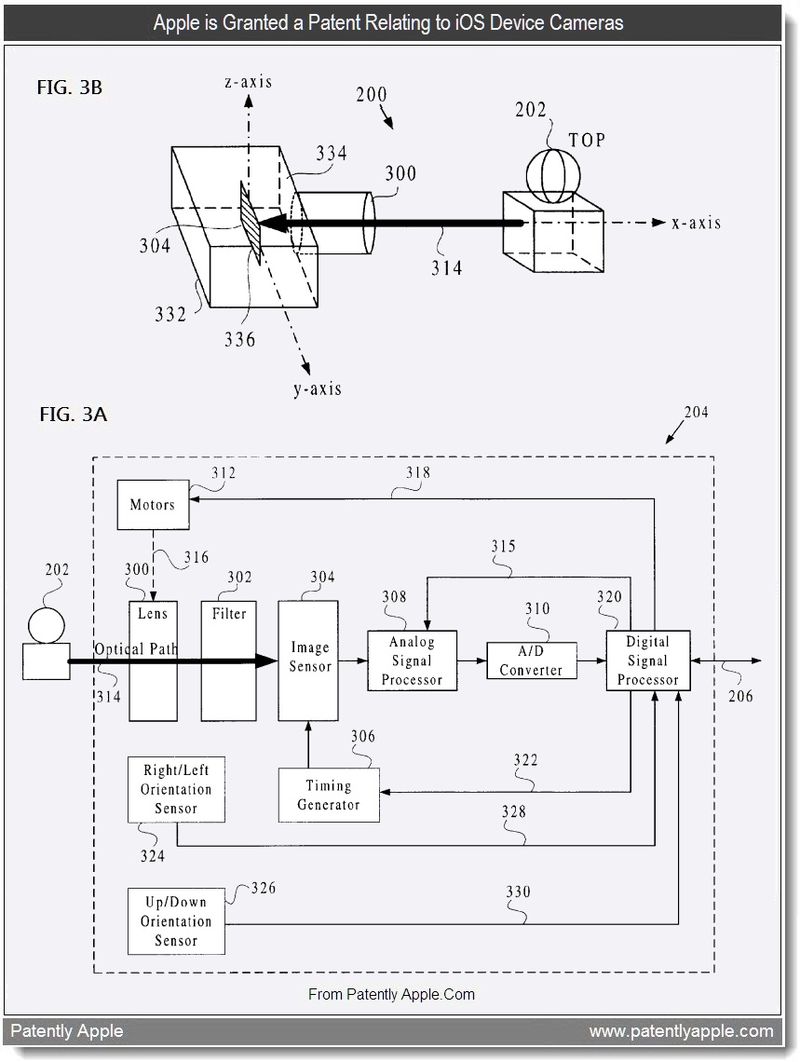 Apple credits Eric Anderson as the inventor of Granted Patent RE42,639 originally filed in Q4 2009. It's taken a while to get this patent.

Apple Has Been Granted a Patent for a 3D Video Viewer

Apple has been granted a patent for what appears to be a Cover Flow-like interface for iMovie. 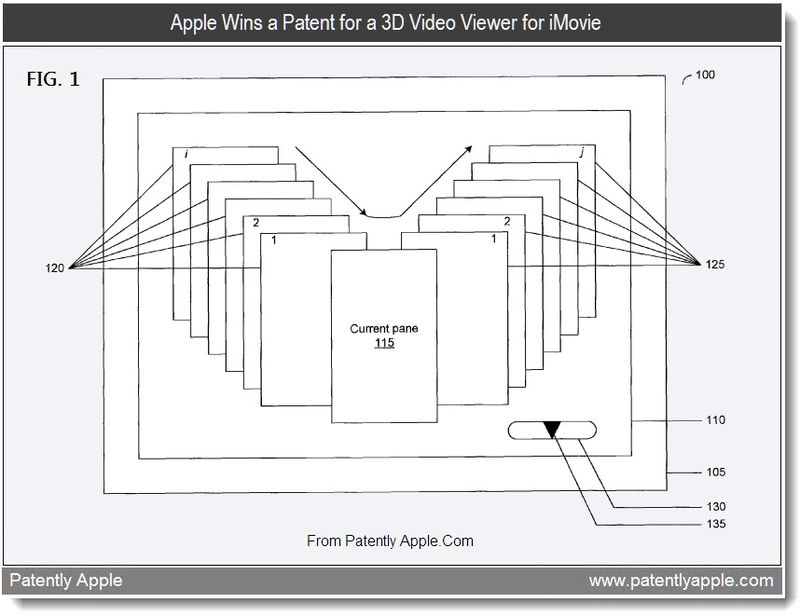 Apple's patent overview states that digital video stored as a sequence of frames, is displayed in a user interface across several staggered panes. Each pane can display the content of one frame in the sequence. When the digital content is played, a first frame displayed in a first pane could be replaced by a subsequent frame in the sequence and the first frame could be displayed in a pane adjacent to the first pane. One of the panes could be displayed more prominently on the user interface in comparison to other panes. The arrangement of panes in combination with the updating of frames displayed in the panes can present the viewer with a three-dimensional (3D) viewing experience.

Apple has been granted a patent for the iPhone 3G Dock. As you could see in patent FIG. 10 below, Apple considered adding additional acoustic apertures to the front bottom of the dock. Whether these added apertures will appear in a future iteration of the dock is not known at this time. 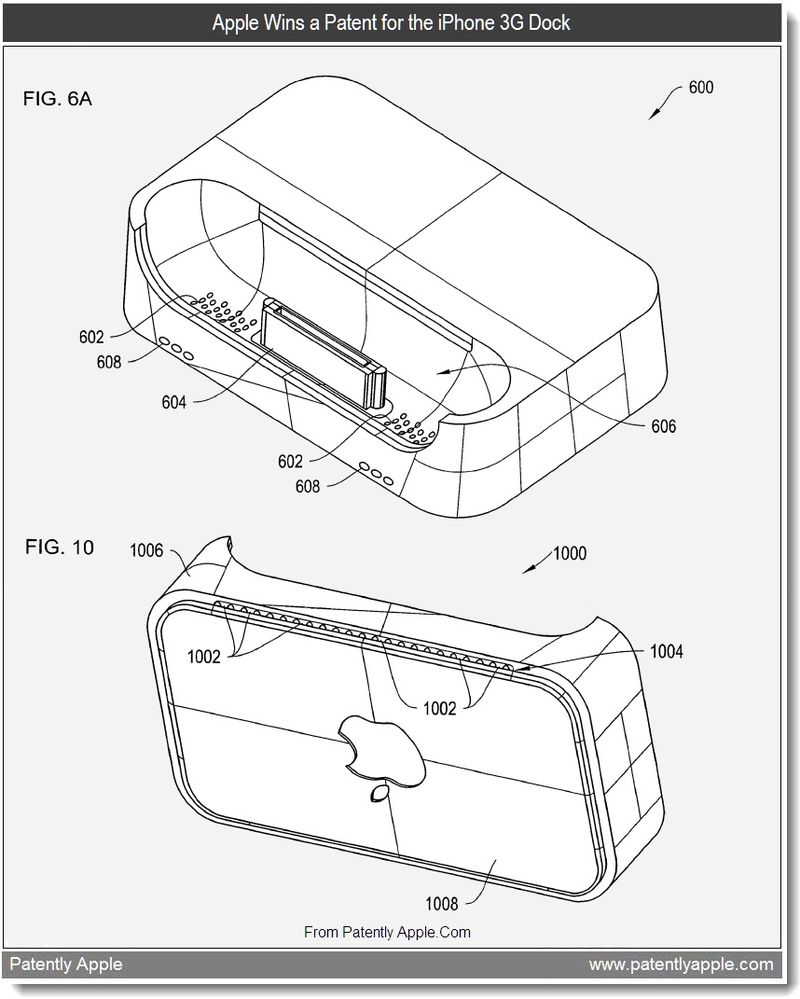 Technically speaking the patent is titled "Personal media device docking station having an accessory device detector." Apple's patent covers systems and methods that include a circuit for detecting the insertion of a component into a docking station, e.g., an audio plug. When the component is inserted into the docking station, an electronic switch can be opened. When the switch is opened, a detector (e.g., monostable multivibrator) for detecting a change in state of the switch can be activated. Responsive to the detected change in state, the detector could issue a signal to a control device. Responsive to the signal, the controller could look to a resistive identification circuit and, based on its resistance, determine whether the component has just been inserted or removed from the docking station.

Apple credits Jahan Minoo as the sole inventor of Granted Patent 8,006,020. A secondary dock-related patent was granted for a "method and system for transferring stored data between a media player and an accessory" under number 8,006,019.

In a secondary granted patent that relates to docking stations titled "Methods and systems for automatic configuration of peripherals," we see a few interesting docking options that have yet to surface. 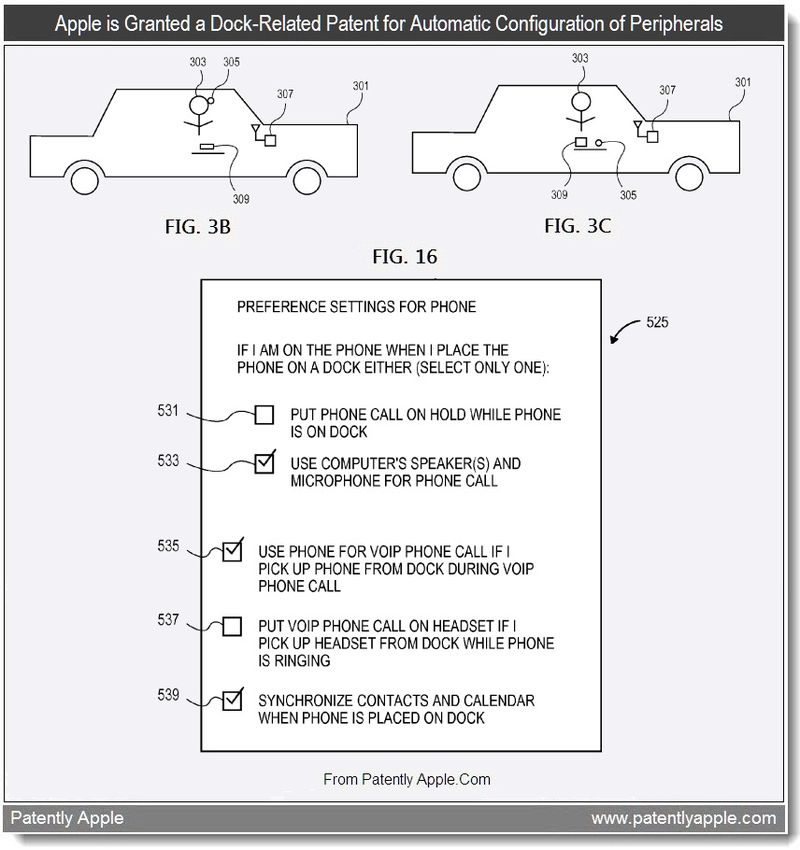 Apple's patent FIG. 3B shows a view of a user in a motor vehicle with a peripheral (e.g. a wireless headset), a data processing system (e.g. a wireless mobile cellular telephone) and a car adapter; in this view, the user is wearing the peripheral. FIG. 3C shows another view of the user of FIG. 3B in the motor vehicle where the user isn't wearing the peripheral nor holding the data processing system.

Apple's patent FIG. 16 shows an example of a user interface which may be displayed on an iPhone when in dock. For more details, see granted patent 8,006,002.

Granted Patent 8,006,250: Creating an object in an object-oriented programming platform