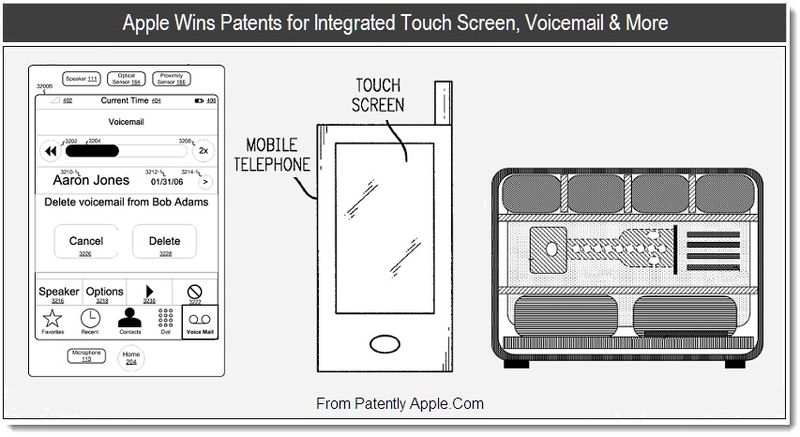 The US Patent and Trademark Office officially published a series of 20 newly granted patents for Apple Inc. today. There were three notable inventions presented today. The first relates to Apple's "Integrated Touch Screen." The invention allows the touch display to be manufactured with fewer parts and/or processing steps as well as ensuring that the display itself may be thinner, brighter and require less power. The second invention relates to a method and GUI related to Apple's iOS "Voicemail Manager." And the last noteworthy invention of the day relates to a Mac Pro-like tower's modular layout mechanisms. This could be a part of a future tower computer – should Apple continue to sell such beasts. At the end of the day it should be noted that the two specific patents relating to the iPhone are just more "Bogus Patents" to get under the skin of Google's Senior Vice President and Chief Legal Officer David Drummond's skin: Ahhh.

Apple's first granted patent generally relates to displays including display pixel stackups, and more particularly to touch sensing circuitry integrated into the display pixel stackup of a display. In this way, for example, a display with integrated touch sensing capability may be manufactured using fewer parts and/or processing steps, and the display itself may be thinner, brighter, and require less power.

The multi-function circuit elements could be, for example, capacitors in display pixels of an LCD that could be configured to operate as storage capacitors/electrodes, common electrodes, conductive wires/pathways, etc., of the display circuitry in the display system, and that may also be configured to operate as circuit elements of the touch sensing circuitry. In this way, for example, in some embodiments a display with integrated touch sensing capability may be manufactured using fewer parts and/or processing steps, and the display itself may be thinner, brighter, and require less power.

To really appreciate the depth of technology involved in this patent one has to review the details contained in granted patent 7,995,041 which was filed for in Q3 2009. Apple credits Shih Chang as the sole inventor of this patent.

Prior to the arrival of the iPhone in 2007, cell phones, even those considered to be "smartphones," presented users with a barrage of physical pushbuttons and extremely confusing methods of accessing functions such as voicemail. Users were frustratingly forced to memorize multiple key sequences and menu hierarchies to access voicemail and navigate through a series of arcane interfaces to simply delete and/or manage voicemail. It was cumbersome and inefficient. Apple's newly granted patent solved those problems by introducing an easy to use multi-touch based GUI for the iPhone that allowed users to access voicemail functionality without a headache. 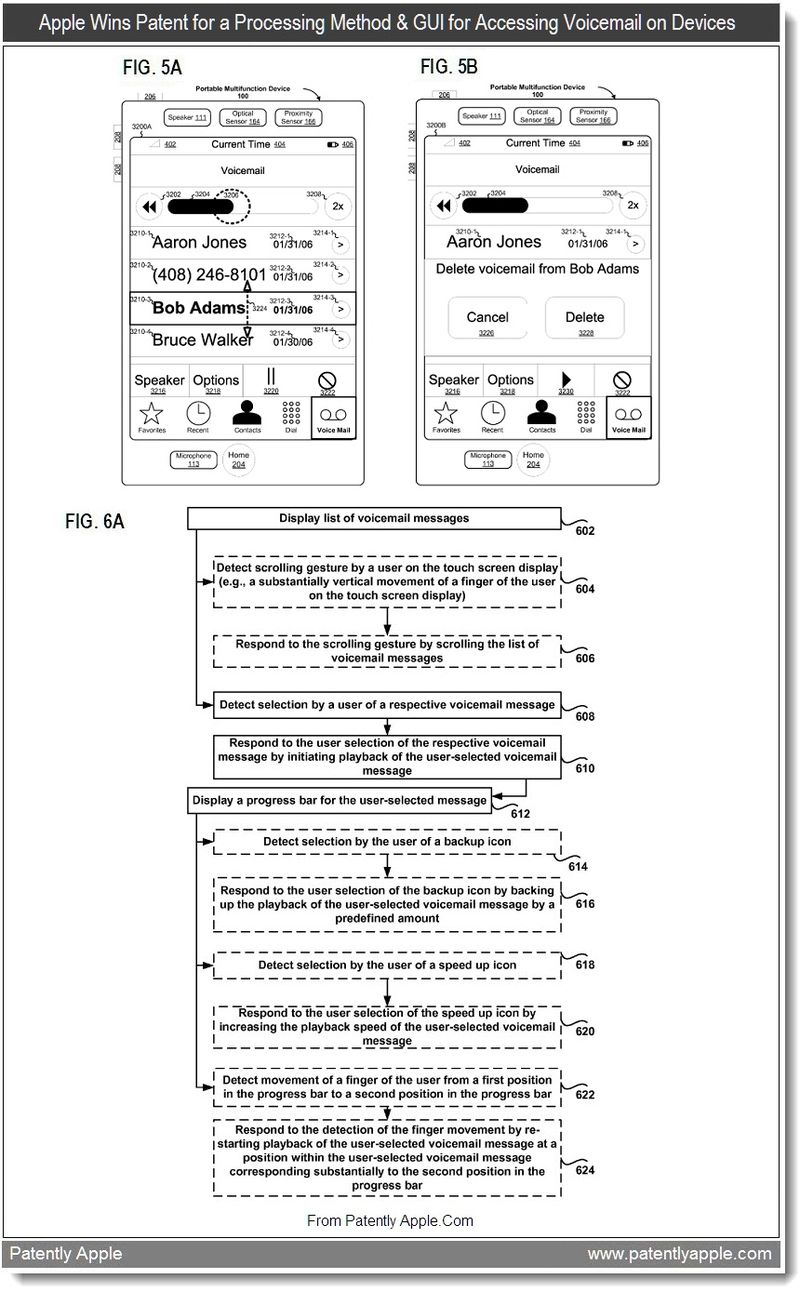 To review the details of this patent which was originally filed in Q2 2007 as the iPhone was officially rolling out, see Granted Patent 7,996,792. Apple credits CEO Steve Jobs, Senior VP of iPhone Software Scott Forstall and team members Freddy Anzures, Greg Christie, Gregory Novick, Imran Chaudhri, Stephen Lemay, Patrick Coffman and Elizabeth Furches as the inventors of this patent.

Apple's granted patent covers their invention that generally relates to personal computing device such as a tower computer, and more particularly to the facilitation of increased modularity with respect to various components. 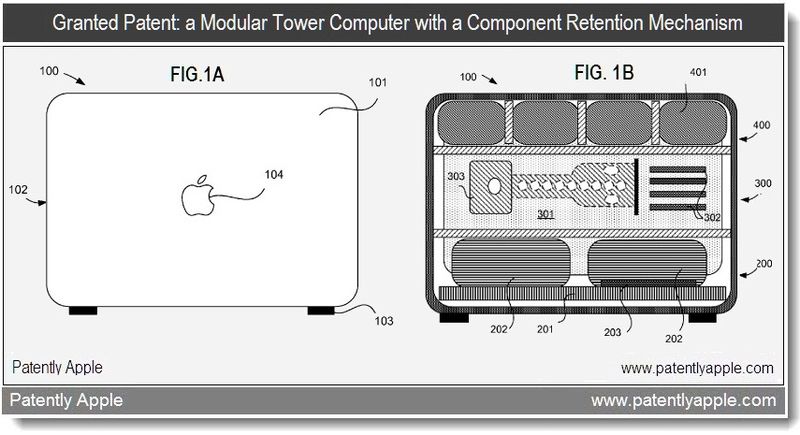 Apple's granted patent has a relationship to a secondary patent which we covered in 2010 that describes a seemingly new mini tower that will use USB 3.0 and/or a hybrid connector. 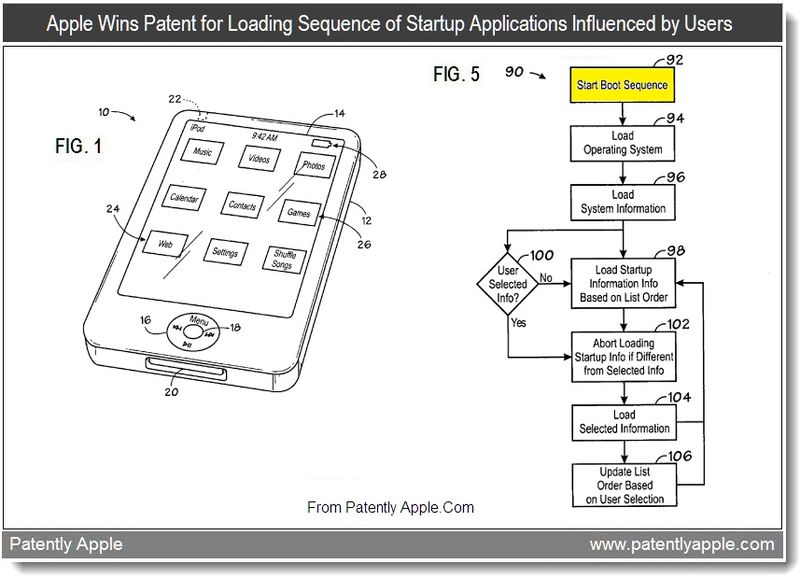 Granted Patent 7,996,351: Automated estimation of a country where a client computer is configured to operate

Interesting Apple Store News Today: In August 2010 Apple filed for a trademark covering their exquisite New York Apple Store-Front constructed with Glass. Today, MacRumors points to how the newly redesigned glass structure should appear when it's finished. Take a look at the graphic in that report that points to the larger panes of glass that they're using. It should be a much cleaner design when finished.