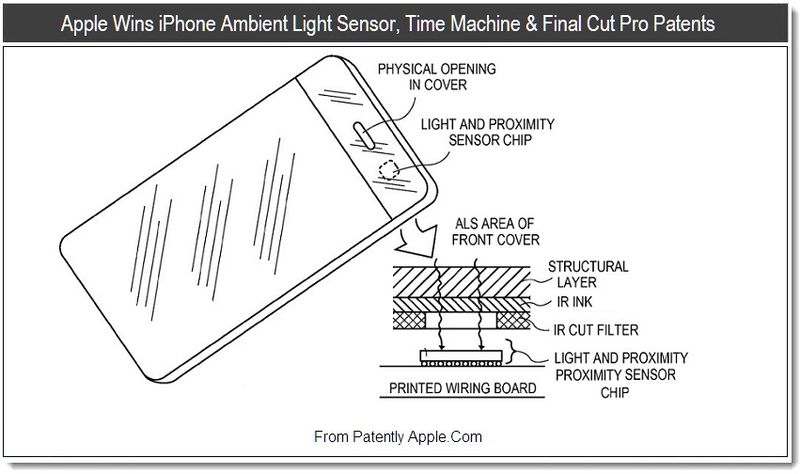 Granted Patent Number One: Light Sensing Device having a Color Sensor and a Clear Sensor for Infrared Rejection

Apple has received a Granted Patent that relates to portable electronic devices like the iPhone that have an integrated ambient light sensor (ALS). Being that we've never covered this patent before, we present you with a full overview of Apple's invention.

Portable electronic devices, such as multi-function smart phones, digital media players, and dedicated digital cameras and navigation devices, have display screens that can be used under various lighting environments. Such devices have integrated in them a function that can provide (in real-time) an indication of the current level of visible light in the immediate environment outside the device. This is called an ambient light sensor function (or ALS). The ALS can be used for applications such as automatically managing the brightness of a display screen for better legibility or for conserving battery energy (depending upon the current ambient light level).

Most recently, advanced, consumer grade, ALS integrated circuit (IC) devices have been developed that have a built-in solid state light sensor together with associated analog and digital circuitry that provide, in real-time, a fairly accurate measurement of the ambient visible light that is incident upon the IC device. These IC devices are for the most part manufactured in accordance with a complementary metal oxide semiconductor (CMOS) fabrication process technology.

The response of many typical CMOS light sensor structures (e.g., CMOS photodiodes) is dominated by infrared (IR) content, rather than visible content. This creates a problem under some artificial lighting environments. For example, a CMOS-based ALS device would likely indicate that its ambient environment is "brighter" when lit by an incandescent lamp compared to a fluorescent lamp. That is because incandescent lamp lighting has fairly high IR content compared to, for example, fluorescent lamp lighting, and the sensor cannot distinguish between lighting conditions where IR dominates and those where visible dominates. To help alleviate this problem, an IR blocking filter (IR cut filter) can be placed in front of the sensor, to thereby lessen the sensitivity of the sensor's output to IR content.

In practice of course, the IR cut filter is not ideal in that there still is an appreciable amount of IR content that will pass through the filter and be detected by the sensor. Although relatively small, such IR leakage may still be too much for an ALS in the following situation. Consider the case where a light transparent cover of a portable electronic device is to have a relatively smooth or uniform front surface, without any physical openings therein. An ALS chip is located below the cover, to sense the ambient light level outside the device. In some cases, it is desired to also make the front surface appear dark from outside (e.g., for aesthetic reasons). To achieve this, a layer of IR transmission ink can be applied to the backside of the cover, which gives the front of the cover a uniform, dark color (e.g., black). The IR ink layer, however, allows very little visible content to pass through and reach the sensor below (e.g., no more than about 5% transmission). This diminishes the ability to distinguish IR from visible in the sensor's output signal (despite the reduction in IR content achieved using the IR cut filter). 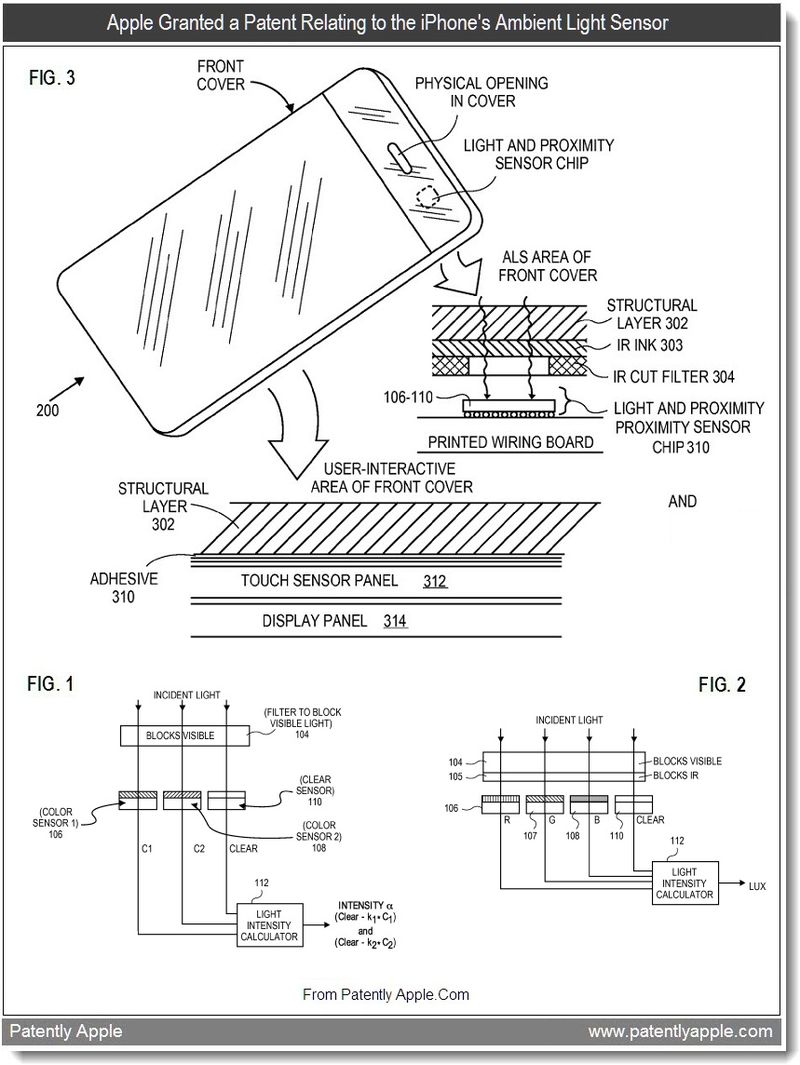 Apple's invention covers a light sensing device that could perform the function of an ambient light sensor (ALS) in a portable electronic device. The elements of the device include a first filter that blocks visible light in a light path, and a set of sensors to detect the light in the light path, after the first filter. These include at least a first color sensor and a clear sensor. The device also has a light intensity calculator that computes a measure of the intensity of visible light in the light path. The calculation is based on a difference between an output signal of the first color sensor, and an output signal of the clear sensor. In other words, the measure of ambient light level is computed based on the differential of at least one color channel and the clear channel. In this manner, the IR content in the light path is advantageously cancelled (when taking the difference between the output signals of the color and clear sensors).

In another embodiment, the calculation of light intensity (representing the ambient light level) uses not just the difference between one color channel and the clear channel, but also a further difference quantity, namely the difference between another color channel and the clear channel. Such a technique may be useful when the first and second color sensors are red and blue sensors, respectively, for example, which are readily available as part of conventional RGB light sensors. Under that scenario, the intensity calculator converts at least two clear-color differentials, which represent cyan and yellow values, respectively, into a green value. The latter may then be used to calculate a lux value, which is a direct measure of the light intensity.

For those wishing to delve into the details of this invention and review all of Apple's 19 claims, see Apple's granted patent 8,008,613. Apple's patent was originally filed in Q2 2009 by Ching Tam, the sole inventor of this patent.

In related News: In May of this year, AppleInsider reported that Apple was allegedly unhappy with the current light sensor in the iPhone 4 and was supposedly testing a new component supplier for future iPhones.

Apple has received their third granted patent relating to OS X's built-in back-up application called "Time Machine." The first was granted in October 2010 and the second was granted in December 2010.

Rumor has it that Microsoft's Windows 8 operating system, which is due to arrive in the market in the second half of 2012, will sport (cough) … copy Apple's Time Machine application under the name History Vault. 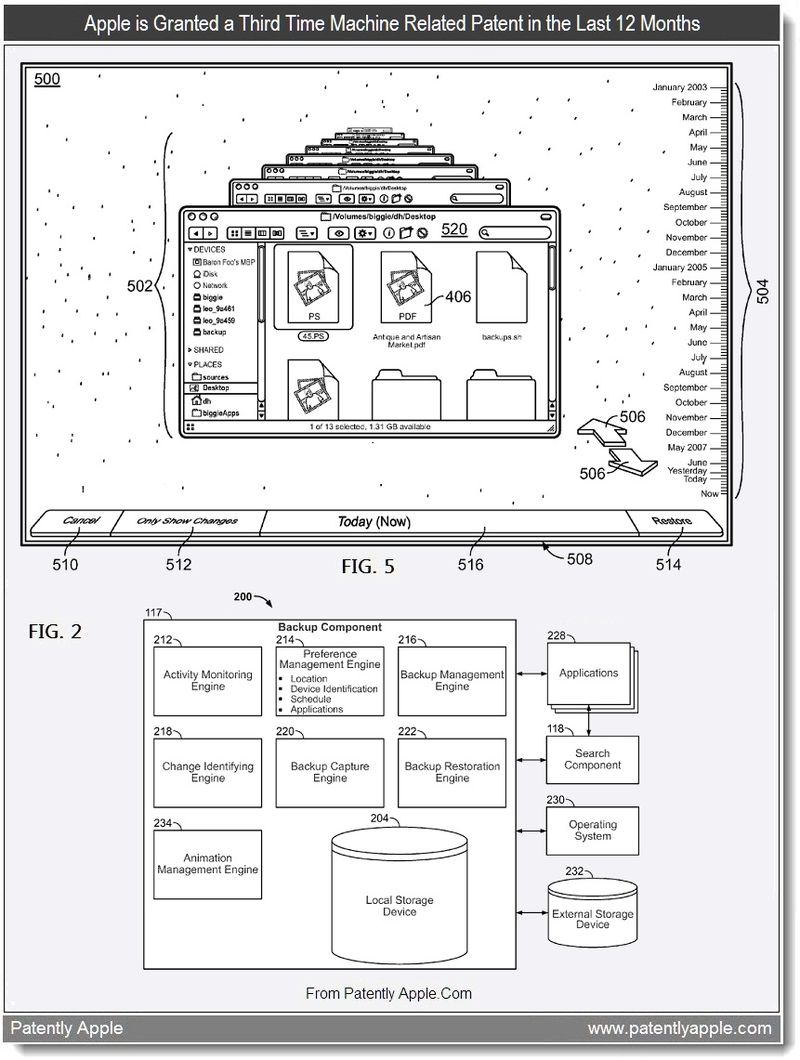 To review Apple's other 14 patent claims and invention detailing, see granted patent 8,010,900. Apple credits David Hart, Mike Matas, Pavel Cisler and Kevin Tiene as the inventors of this patent which was originally filed in Q2 2007.

Apple has received a Granted Patent that relates to managing aspects of user interfaces, for example, image colors, in software applications. On the outside, the patent seemingly relates to Final Cut Pro. The patent covers "color bins" which is a common Final Cut Pro element and the main patent figure illustrates a Mac Pro tower indicating that it has nothing to do with a consumer app. 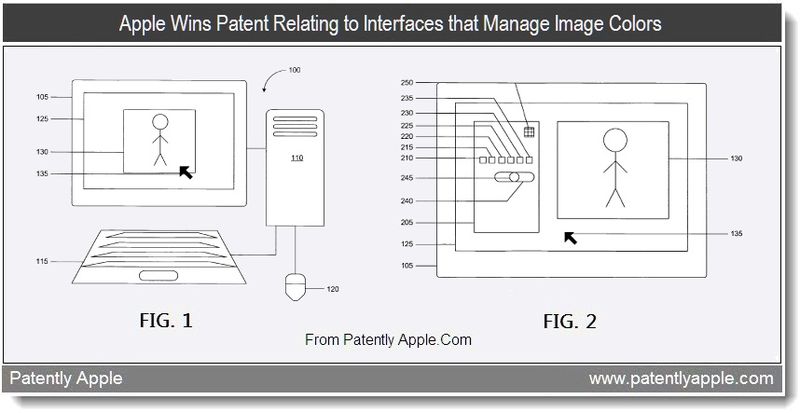 To review Apple's other 45 patent claims and invention detailing, see granted patent 8,009,177. Apple credits Mark Kawano, Jean-Pierre Mouilleseaux, Mike Stern, Daniel Pettigrew and Dan as the inventors of this patent which was originally filed in Q1 2008.

Apple's award winning application Final Cut Pro has been granted a series of wins over the last 23 months: One, two, three, four, five and six.

Interestingly on the ambient sensor diagram there is no home button on the iPhone, a prelude?