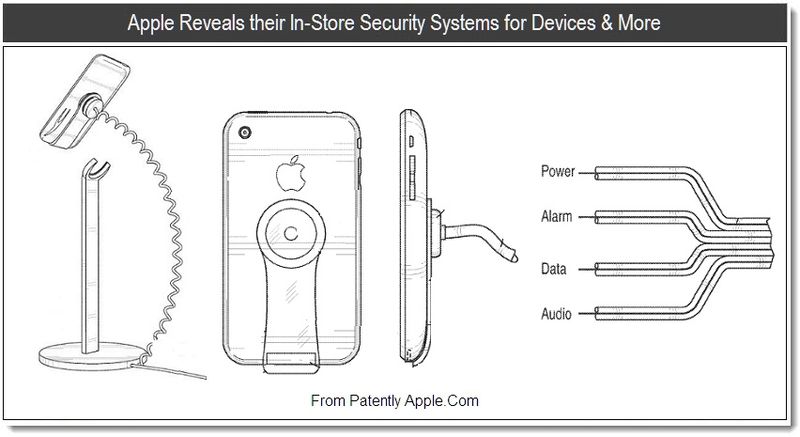 If you know Steve Jobs then you know that he tries to patent everything under the sun including everything related to their own Apple Stores. Whether it's their Classic Glass Apple Store architecture in New York or the average in-mall Apple Store design layout or even the iPad stands that sit on the tables at every Apple Store, they have it covered. So it shouldn't come as a surprise that Apple has once again applied for a patent to cover their unique in-store security systems for devices that includes very sophisticated cabling and alarms. The security system designs also extend to Apple Kiosks in stores like Best Buy and Future Shop. Apple also states that their security systems could extend to oddities like transportation vehicle instruments and televisions. The former speculatively sounds like a potential new accessory in the making that would be welcomed. Some of the security designs appearing in the application seem to be new and the fact that Apple only filed for a patent this past Christmas tells us that we may see some of these new designs coming to an Apple Store in the not- too-distant future.

In Apple's patent FIGS. 1 and 2, several types of security systems are laid out, along with their inconveniences. A first option could include placing a handheld electronic device freely within a docking station 104. A consumer may simply pick up device 102 to manipulate and try it. The device however, is not retained or monitored in any way, and may therefore very easily be stolen or removed without notice. A second option could include securing a handheld electronic device 112 to a cable 114. This may allow a consumer to hold and use the device while keeping it physically secured. Although this approach may decrease free use for a consumer, the limits to the consumer's experience are reduced and therefore may allow for a satisfactory consumer experience. This approach, however, may still require a significant tradeoff between the consumer experience and security. In particular, as shown in FIG. 2A, if a cable 204 securing an electronic device 202 is too small to improve a consumer's experience, the cable may be easily cut. If the cable is too large to cut, the consumer's experience may be adversely affected because the cable may require a large force for it to bend or move. 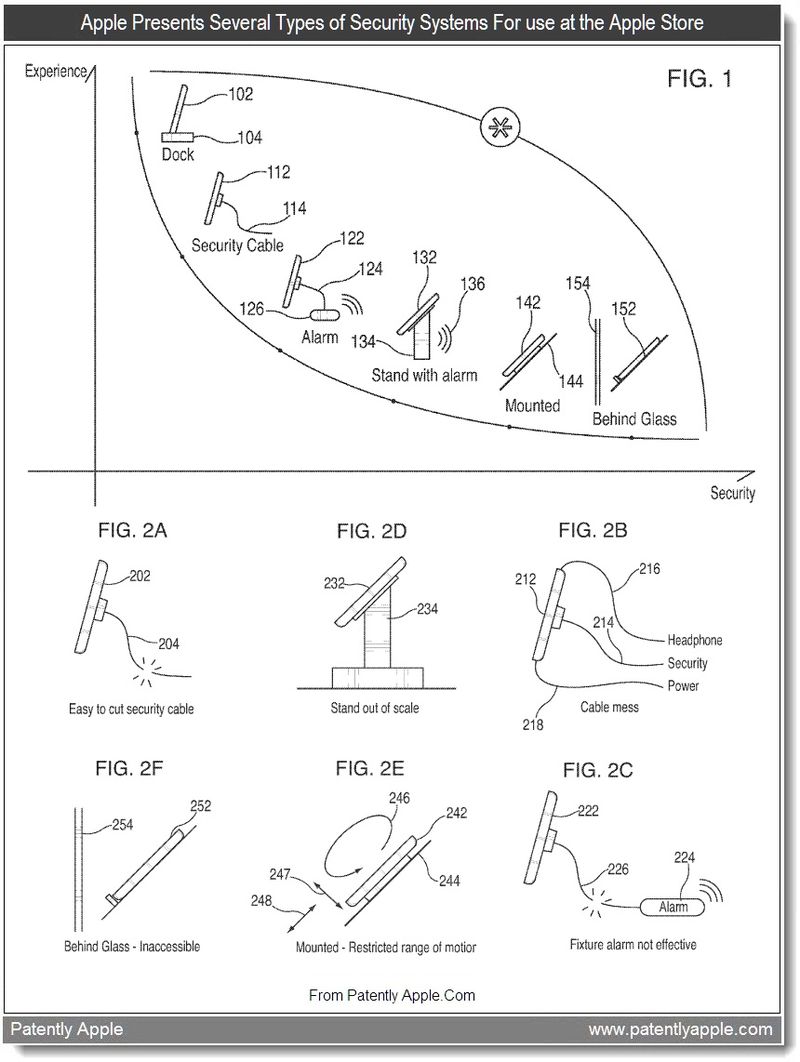 In some cases, this approach may also require a large number of cables connected to the device. For example, as shown in FIG. 2B, a device 212 secured by a cable 214 may also include a headphone cable 216 and a power or data cable 218 for exchanging certain types of signals. The resulting display may then include three distinct cables, which may distract the user from the device and may even cause tangling, which may affect the user's experience.

A third option, as shown in FIG. 1, could include coupling a handheld electronic device to an alarm 124, for example, at an end of a cable 126. The alarm may be configured to sound loudly if electronic device 122 is disconnected from the alarm (e.g., if the cable coupling the device to the alarm is cut or decoupled in some way). 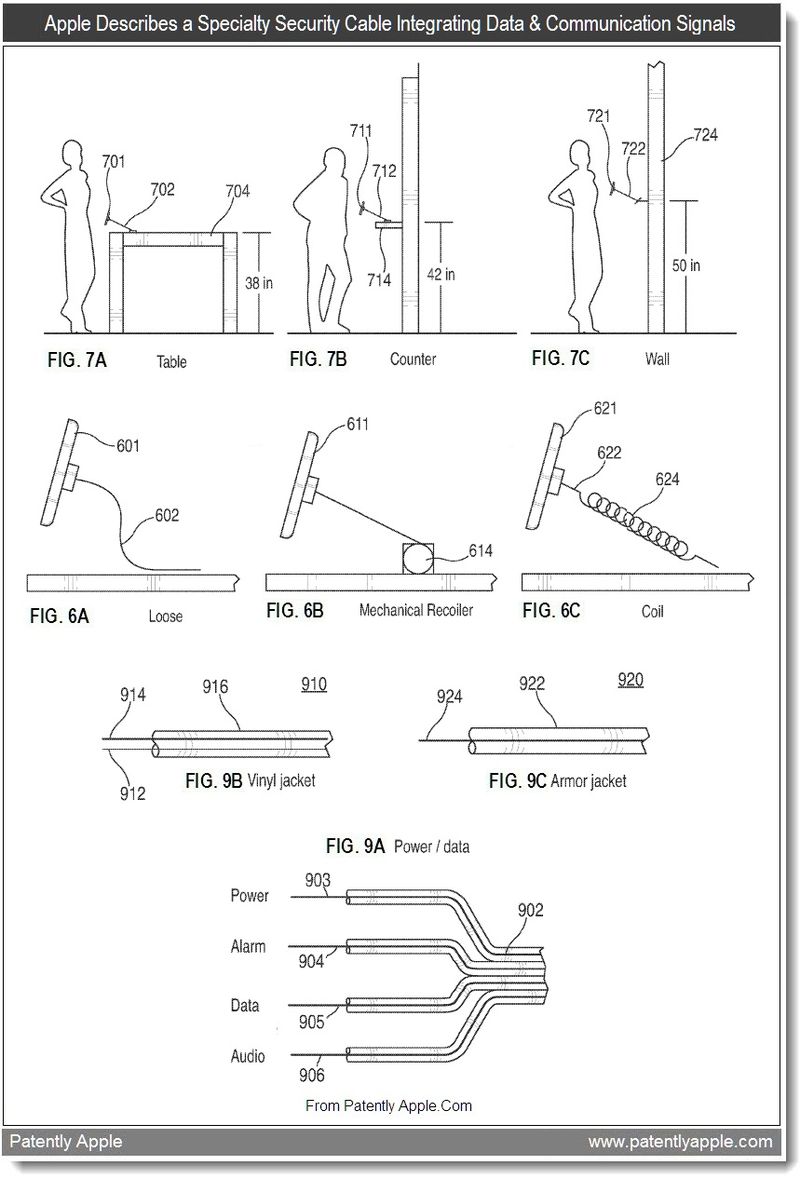 Apple's patent FIGS. 9A to 9C are diagrams of cable types of a handheld device security system. In some embodiments, as shown in FIG. 9A, for example, a cable 902 may integrate security features with data, power, and other signal paths (e.g., audio) that may be used to communicate signals with a handheld electronic device. For example, the cable could include a power path 903, an alarm path 904, a data path 905, and an audio path 906. The Alarm path may serve to monitor for cuts or a decoupling of the cable and may be used to drive an alarm. When the alarm path is adversely affected (e.g., cut into or decoupled), an alarm may be sounded at the device, an associated stand, docking station, fixture, and/or the like. The alarm path may be a dedicated path or it may also be a data, power, and/or audio path that may also act as an alarm path.

Securing a Handheld Device to a Fixture using a Stand

Apple's patent FIGS. 10A and 10B are diagrams of a handheld electronic device security system that may be configured to secure a handheld electronic device to a fixture using a stand. The stand may provide a surface onto which the handheld device may rest. In some embodiments, as shown in FIG. 10A, for example, a device 1002 could be placed on a stand 1004 that may include a platform 1006 for receiving a back side 1003 of the electronic device and a post 1005 for maintaining platform 1006 offset from a surface of a fixture 1010 to which stand 1004 may be coupled. The stand could be attached to the fixture such that it may not be movable therefrom (e.g., fixed). For example, the stand may be glued, fastened, or otherwise attached to the fixture. In some cases, the stand may even be integral with the fixture. 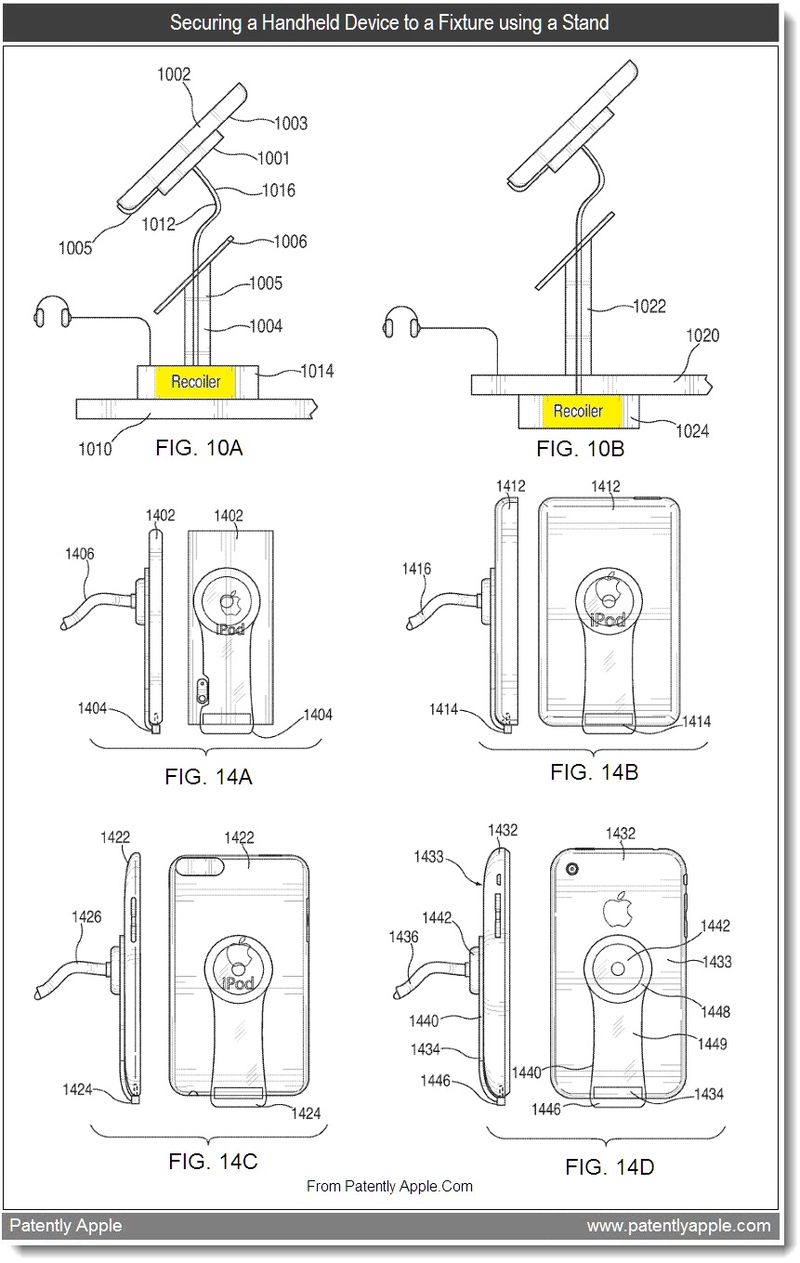 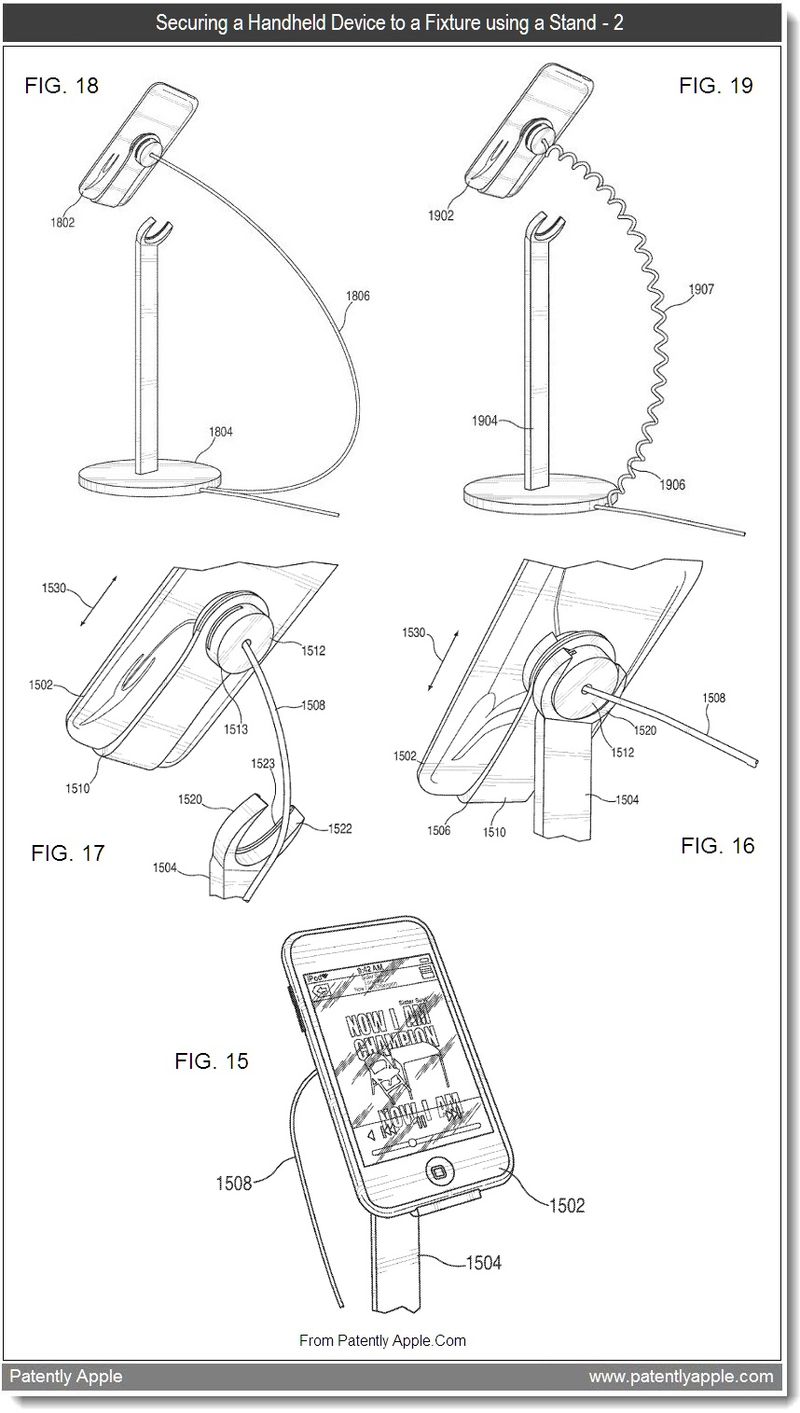 Not limited to handheld devices

For those wanting to know every little detail about Apple's In-Store security systems for devices, you'll find all you need under Apple's patent application 20110187531 which was originally filed in Q4 2010 by inventors Wilhelm Oehl, Erik Anderson, Edmond Kuan, Joe Nobles, Kambiz Ahmadi and Isao Takezawa. For what it's worth, many of these engineers are new to Apple, according to our database. Update Aug. 7, 2011: Evidently the reason for these names not appearing in our database is due to the fact that these talented professionals are from Eight Inc, a specialty retail design house that has worked with Apple since 1999.  Thanks to Loius M. for his email on this matter.